Have you ever wanted to be the claw in a giant claw machine or chase balls as a hungry, hungry human? Well, now’s your chance! The life-sized games from Interactive Entertainment Group – including Human Foosball and Human Bowling – will guarantee your next gathering will be anything but ordinary.

“Coming out of the pandemic, people are craving in-person experiences more than ever,” said Interactive Entertainment Group Content Marketing Specialist Arielle Dukofsky. “From a life-sized human claw machine to giant version of hungry hungry hippos, these nostalgic games are guaranteed to leave a massive impression.”

You will literally “be the claw” in a giant version of the classic arcade game as you’re lifted into the air on a crane-like device and dipped into a pit full of prizes. Height Range is 48”-76” tall; weight range is up to 250lbs. 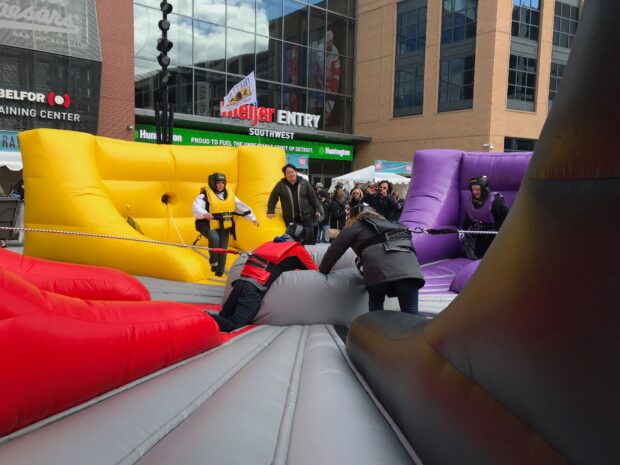 If you fondly remember the board game where four hungry hippos chase down marbles, you’ll definitely want to play the life-sized bungee-style version where four players test their speed, strength, and stamina as they race to retrieve as many balls as possible.

This is not your typical bar version where plastic soccer players do all the work. Instead, for Human Foosball, ten players (ages 10+) are challenged to kick a soccer ball into their opponent’s goal while connected to a pole.

If you’ve ever fantasized about turning a friend, co-worker – or most likely, a sibling – into a bowling ball, Human Bowling is exactly that. You (or the object of your fantasy) will squeeze into a giant bowling ball and be rolled down an inflatable lane into five-foot bowling pins. 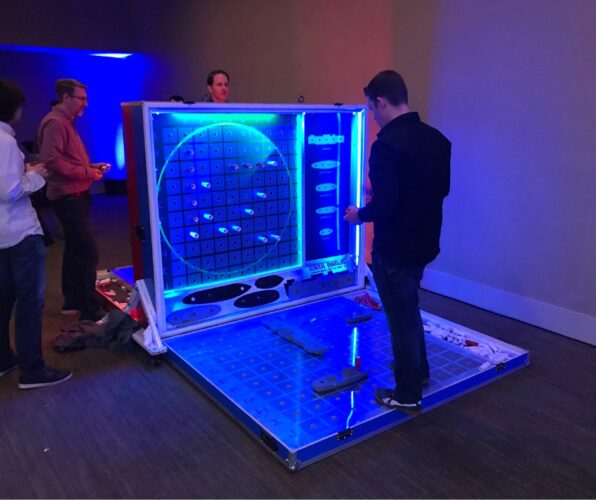 Not interested in being suspended by a crane, harnessed to a bungee, or strapped inside a bowling ball? Giant Battleship is probably your game. The giant version of the ’70s strategy game pits players in a head-to-head search for their opponent’s fleet of ships, including an aircraft carrier, a destroyer, a submarine, a patrol boat, and of course, a battleship.