My first job was at a family-owned office products store at the mall. (Raise your hand if your first job was at your local mall. It was THE BEST, wasn’t it?! Sigh. I digress.) Being low on the food chain, I was scheduled to work most Saturday mornings, so my Saturdays began fairly early. I had to get to the store and get things ready, and for someone still in high school, getting there on a weekend morning was quite an accomplishment.

One of the things that I looked forward to most each Saturday morning was the sweet smell of early morning cinnamon rolls being baked at the Cinnabon located in the food court just around the corner and downstairs. That spice-filled sweet smell would waft up to our second story storefront, and it always made those early mornings just a bit more palatable. Early morning mall walkers, the smell of huge cinnamon rolls baking, and fresh office supplies. I thought it was a little piece of heaven. Of course, the real treat was getting to occasionally sink my teeth into one of those cinnamon rolls. Sometimes there’s just nothing better on a weekend morning, is there?

Disney recently released the Disney Villains Devilishly Delicious Cookbook, and Jackie was gracious enough to secure a copy for me. She passed the cookbook along to me while we were in the studio filming this past Tuesday, and nestled among the recipes was one for scratch cinnamon rolls. 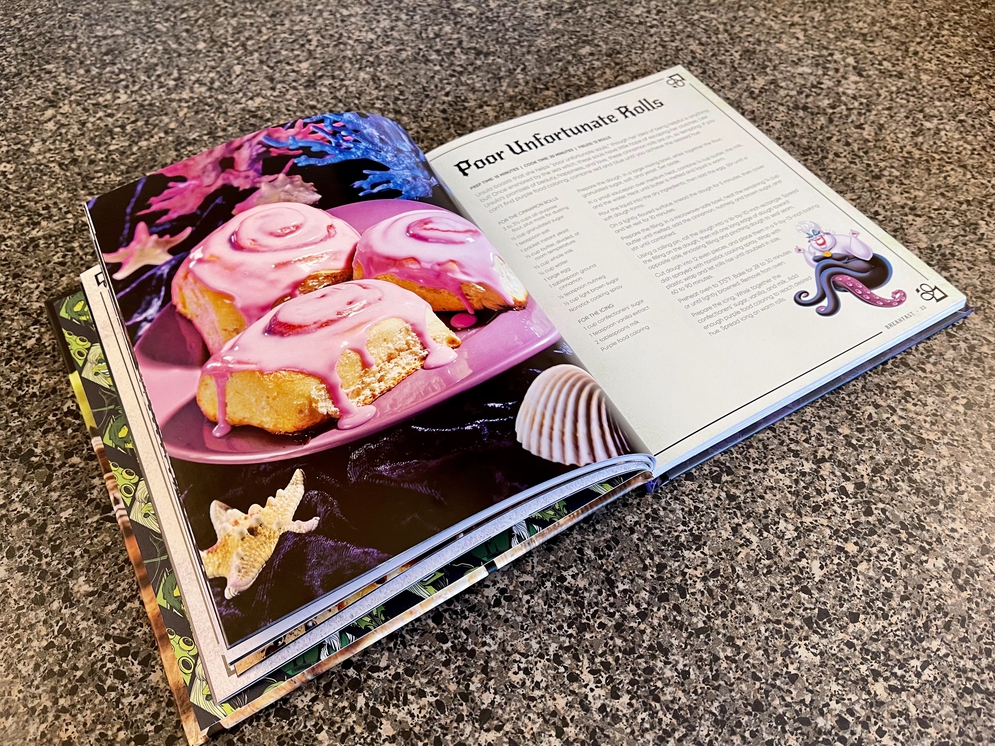 The new cookbook is wonderful. Each recipe is inspired by either a quote, characteristic or plot line surrounding the featured villain. Each recipe also gives a bit of backstory regarding the villain and/or the recipe, and it’s beautifully and cohesively themed and presented. If Disney cookbooks are your thing, I highly recommend this one.

I mentioned last week when I made Pooh Bear’s Honey Buns that, years and years ago, my youngest and I made Emeril Lagasse’s scratch cinnamon rolls. I also mentioned that it took us one entire day to make said cinnamon rolls because they had to rise twice and involved a vast amount of work. Thankfully, Ursula’s version are kinder in the time-required department. Leave it to Ursula; she does tend to want to get right down to the point.

In skimming the recipe, I found that we will need to let the cinnamon rolls rise for a maximum of an hour and a half. I felt that that was a manageable amount of time, and was thankful that I wouldn’t have to wait too terribly long to get the gooey cinnamon rolls into my mouth. If we’re going to make Saturday Snacks, let’s make them post haste, right? This is the weekend, and we just don’t want to wait. 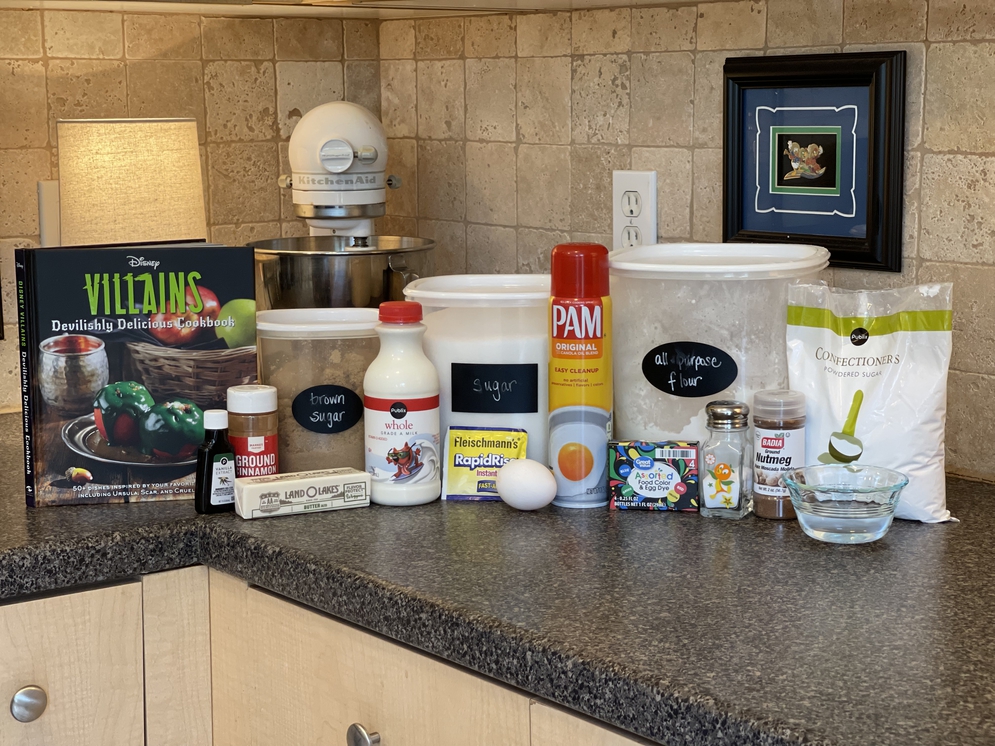 Thanks to the Great Pandemic Yeast Shortage of 2020, I had the instant variety of active dry yeast on hand. An entire packet is called for in this recipe, so just in case you didn’t grab a packet or three of instant yeast last year because it was the only thing left on the shelves like I did, definitely grab some at the store. 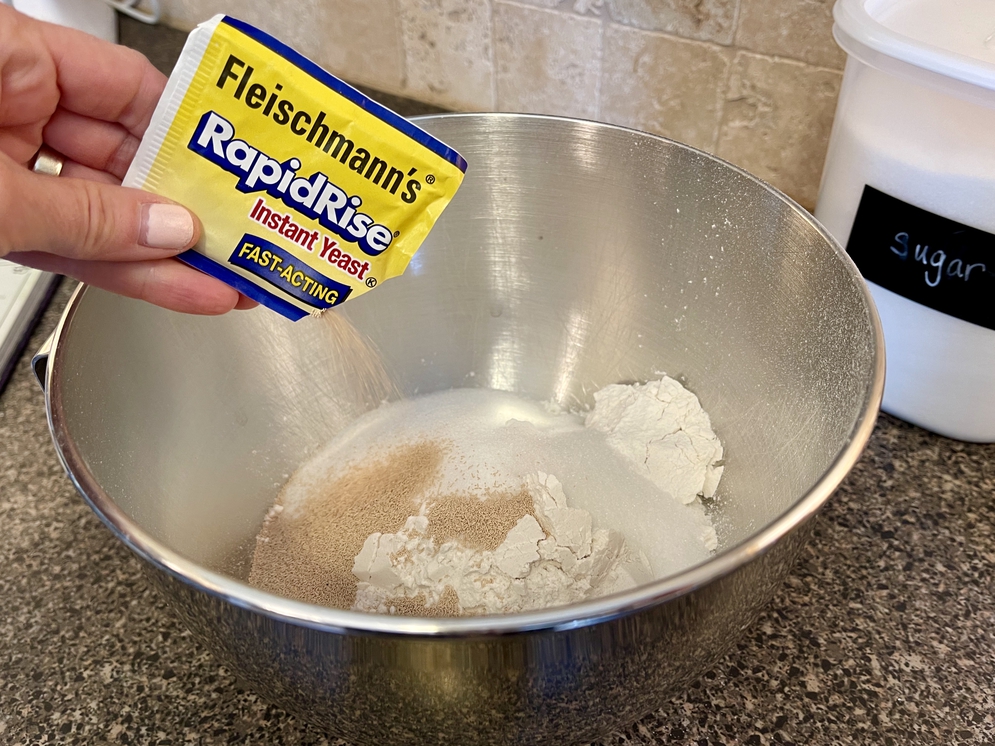 Our first steps address the preparation the dough. I grabbed my stand mixer and tossed in just over 3 cups of all-purpose flour, a 1/2 cup of granulated sugar, 1 teaspoon of salt, and the packet of instant yeast. I mixed them up, pushed the bowl to the side and grabbed a small saucepan out of the cabinet for our next step. 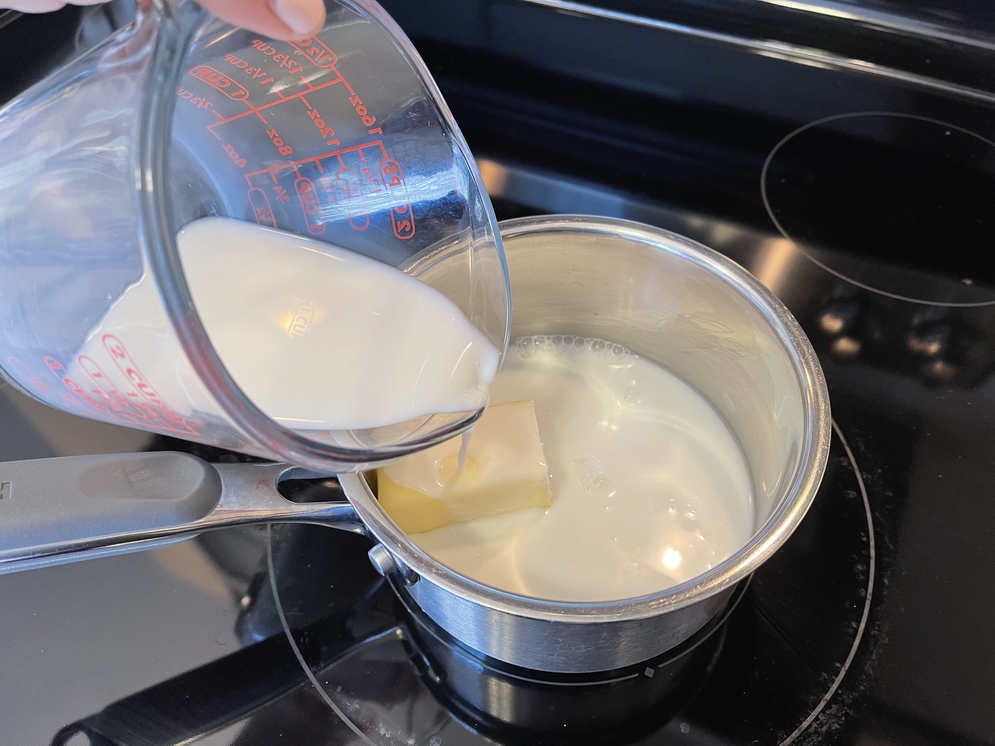 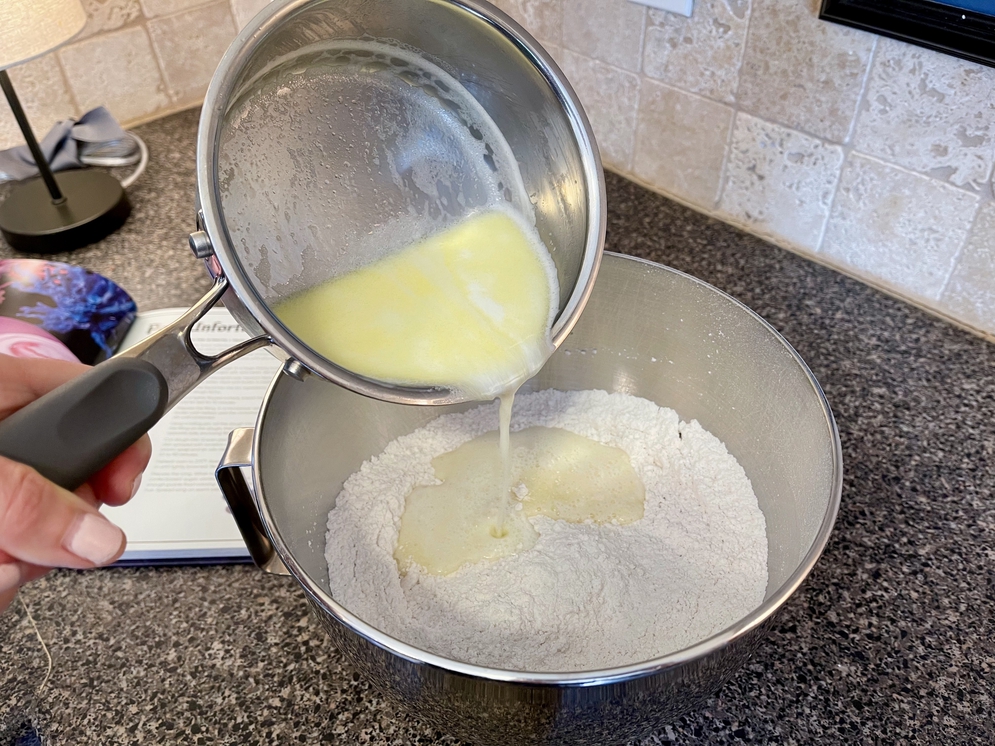 The recipe calls for the liquids to be heated until the butter is completely melted and everything inside the saucepan is warm. Once you’ve reached that point, you can pour the liquid into the dry ingredients, and add one large egg. 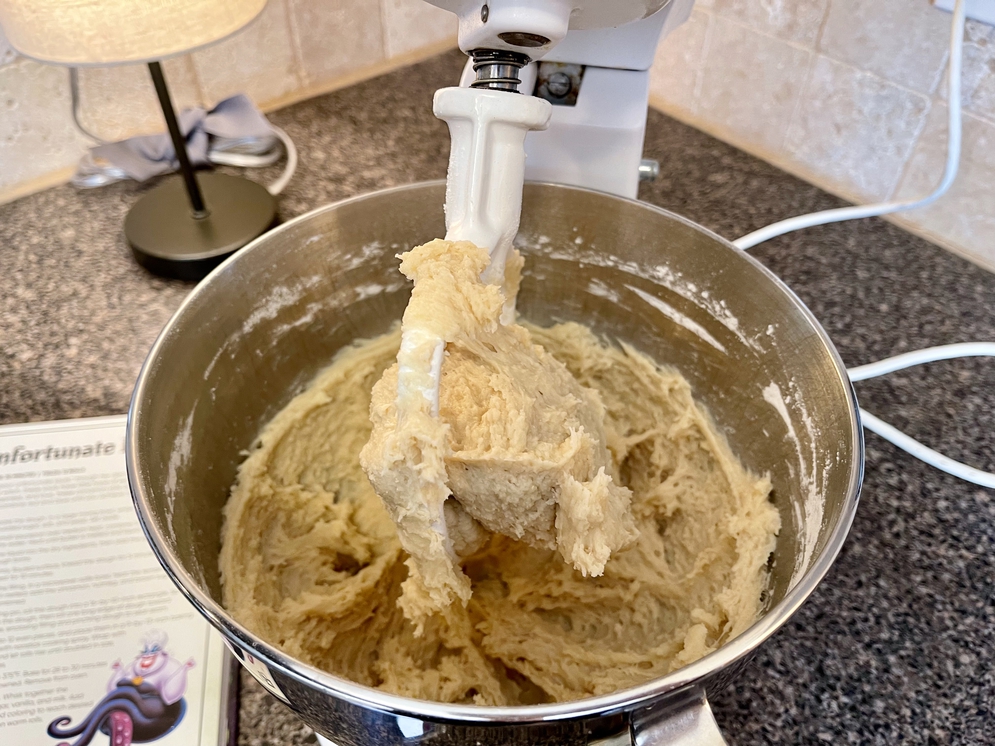 I put the beater on slow (stir) speed and ran it until a soft dough began to form. 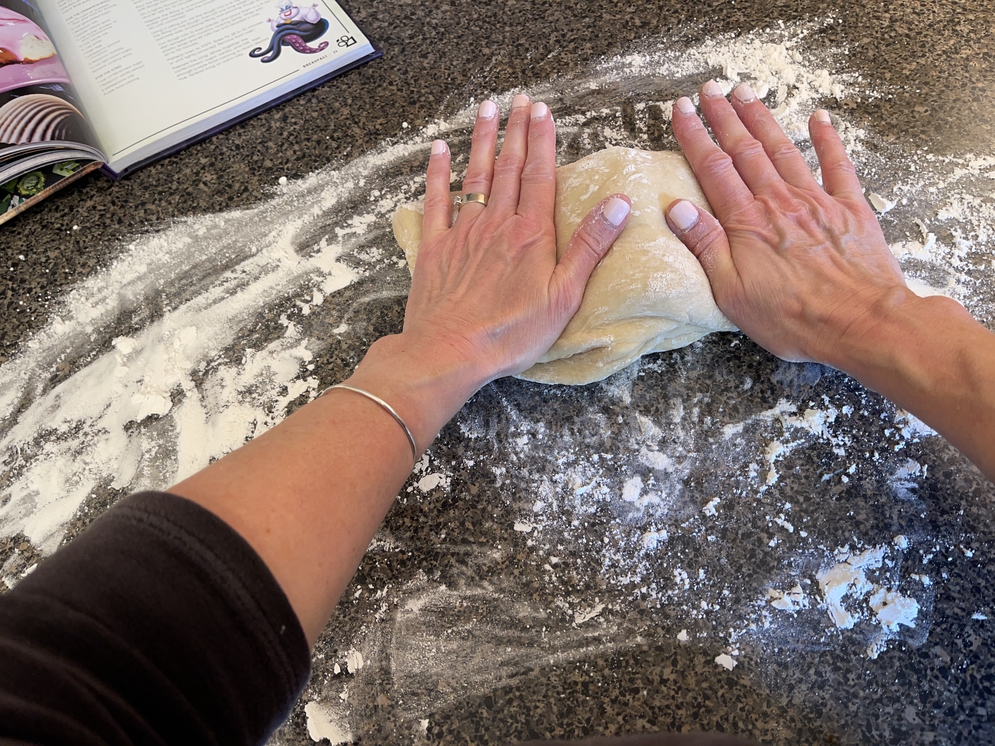 We’re now asked to knead the dough for five minutes on a lightly floured surface. I sprinkled a bit of flour onto my counter, and got an arm workout. You never know exactly how long five minutes is until you’re kneading dough. Then you feel every single second tick by. 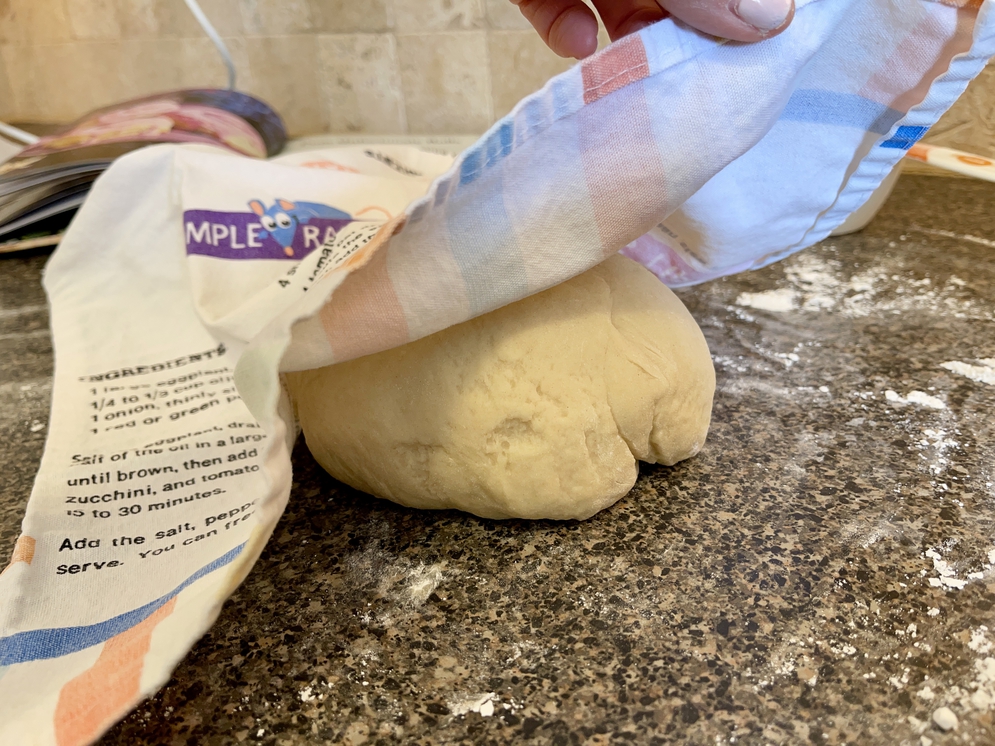 Once the five-minute arm workout was complete, I covered the dough with a tea towel and let it rest on the counter for 10 minutes. 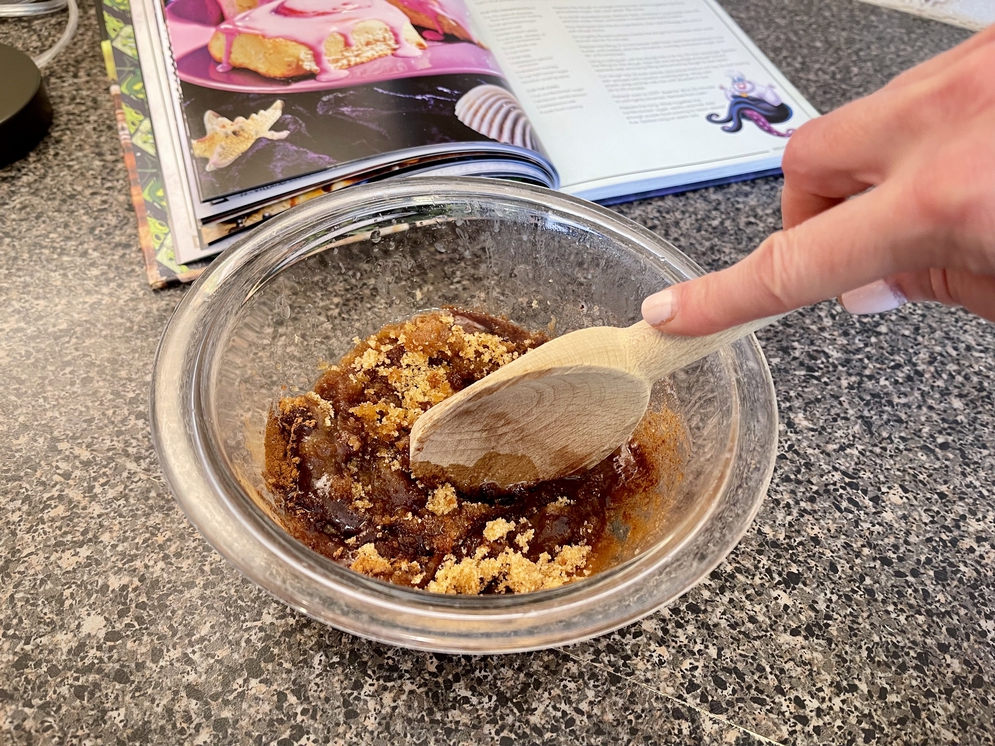 While the dough was resting, I melted the remaining 1/4 of butter in the microwave. I added 1 tablespoon of cinnamon, 1/2 teaspoon of nutmeg, and 1/2 cup of light brown sugar to the melted butter and stirred everything until the ingredients were completely combined.

Once the filling was ready to go, I took a rolling pin to the dough. The recipe asks that we roll the dough out to a 16×10″ rectangle, so I turned to my trusty circa 1993 NFL ruler to help me out. I got the dough as close to the required measurements as I could, and then spread the filling on top of it. 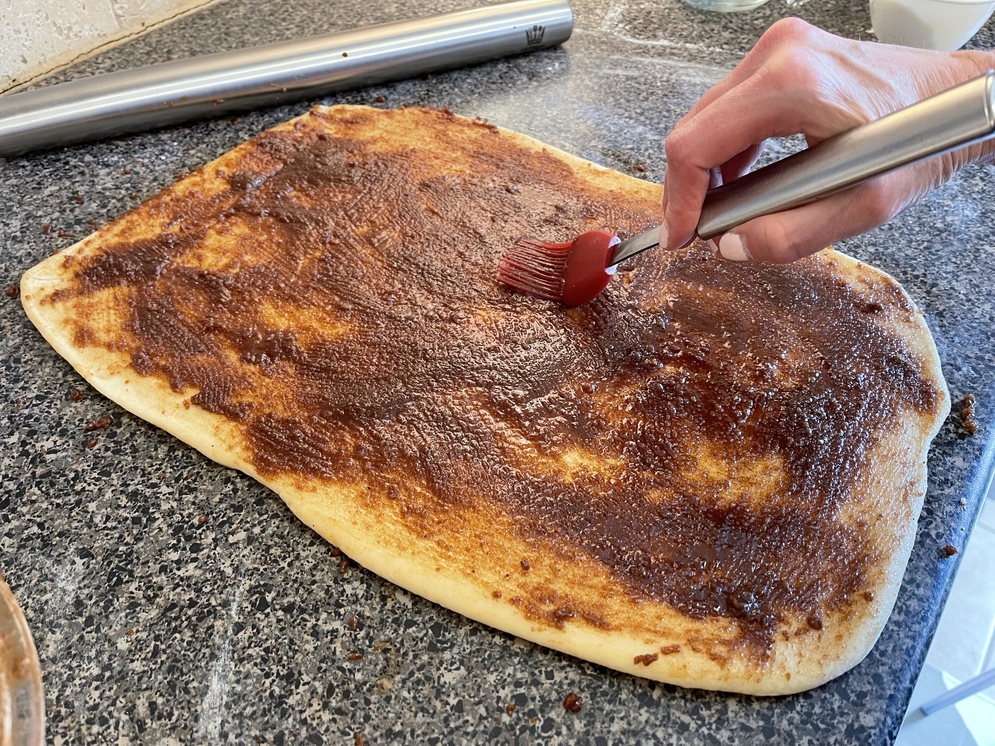 Be warned: the filling will need just a bit of coaxing to spread. I started using a spoon to try to get things spread out evenly, and I quickly moved on to using a brush. The brush (and a bit of elbow grease) worked best. 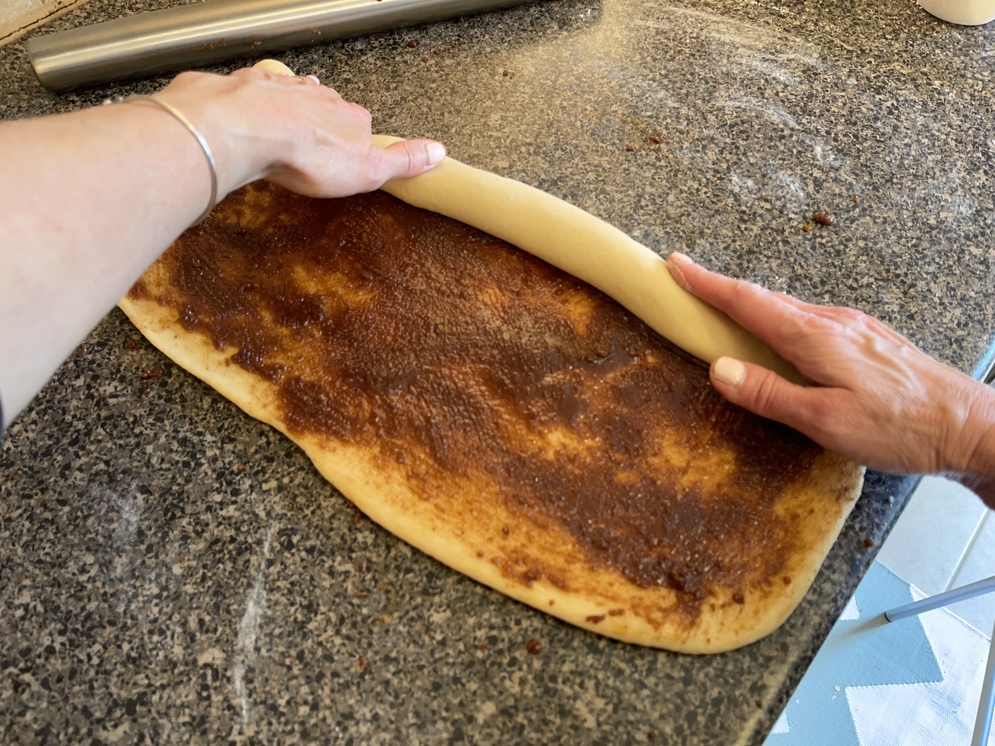 Once the dough is covered with the filling, you and I get to roll it into that oh-so-iconic spiral that cinnamon rolls are known for. Begin at one long side, take a deep breath, and just start rolling. You’ve got this. 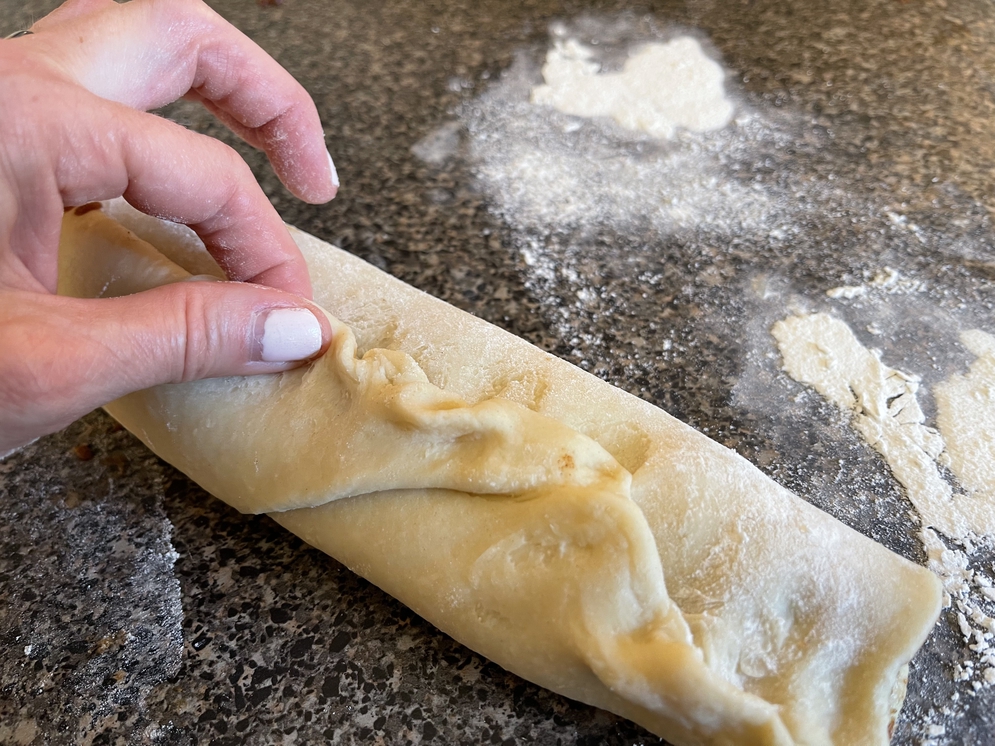 When the rolling of the dough is complete, pinch the dough along the bottom, and cut the dough into 12 even pieces. 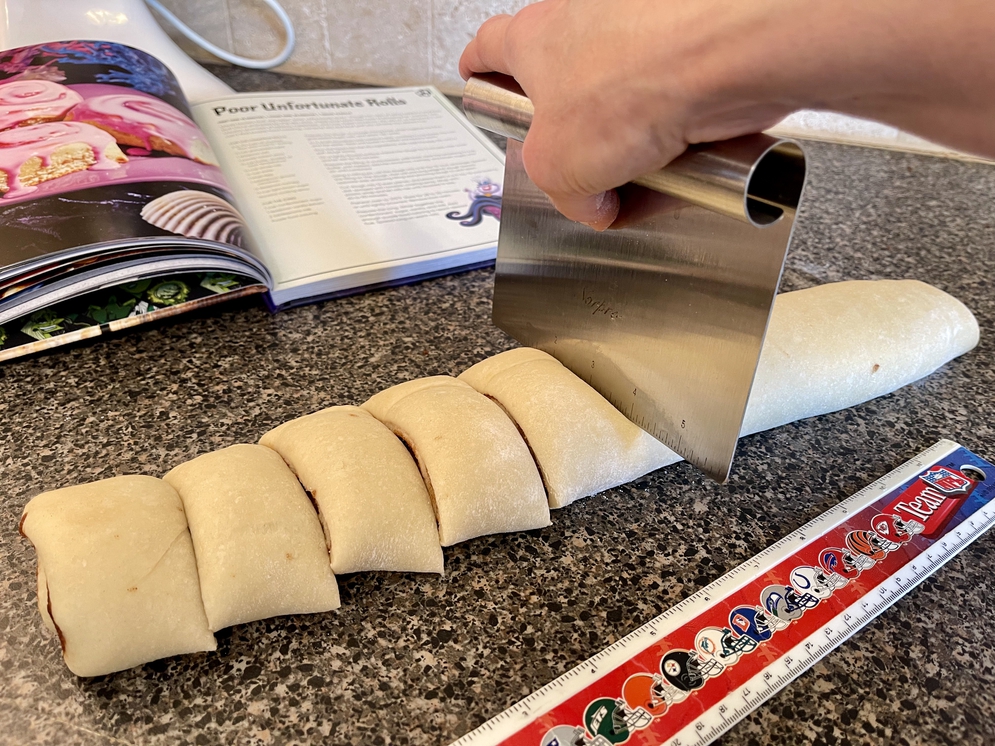 Even though I used my ruler and hyper-analyzed the measurements, I still came up one piece short. Que será, será. Eleven cinnamon rolls would have to do. 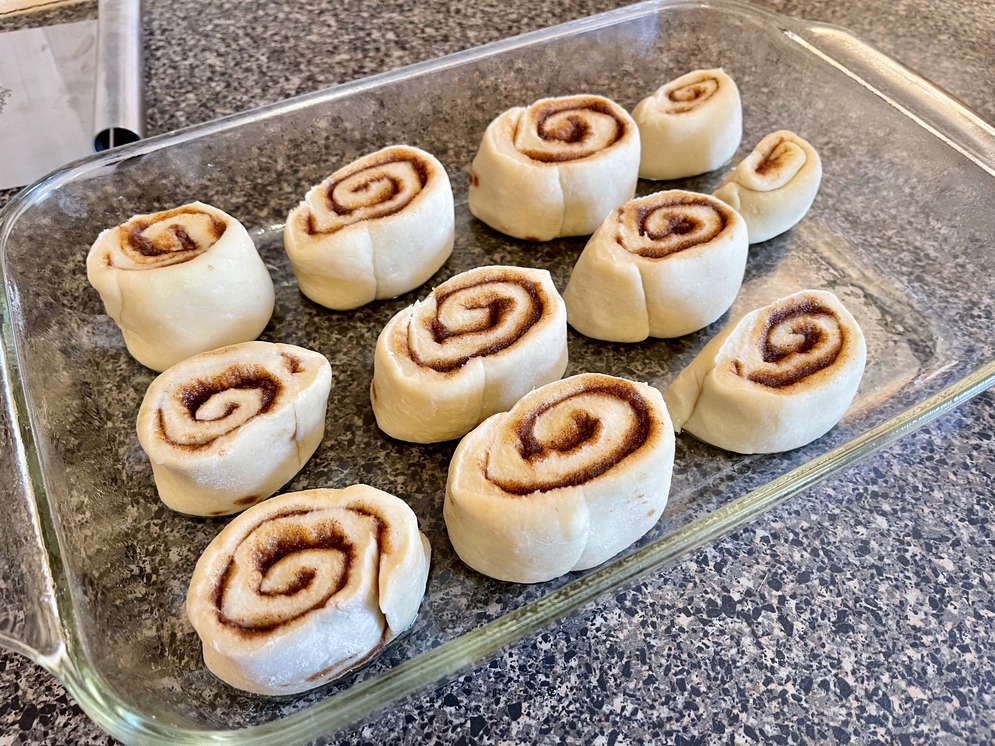 I next gave my 9×13″ baking dish a good coating of spray oil and placed the rolls into the pan to rise. The recipe recommends that we allow the rolls to rise to double the size for 60 to 90 minutes. I wrapped the pan in plastic wrap and set the timer for 90 minutes. I opted for the longer time because I wanted to give my cinnamon rolls all the best chances to be delicious. I mean, if we’re making cinnamon rolls from scratch, those babies better be amazing, right? 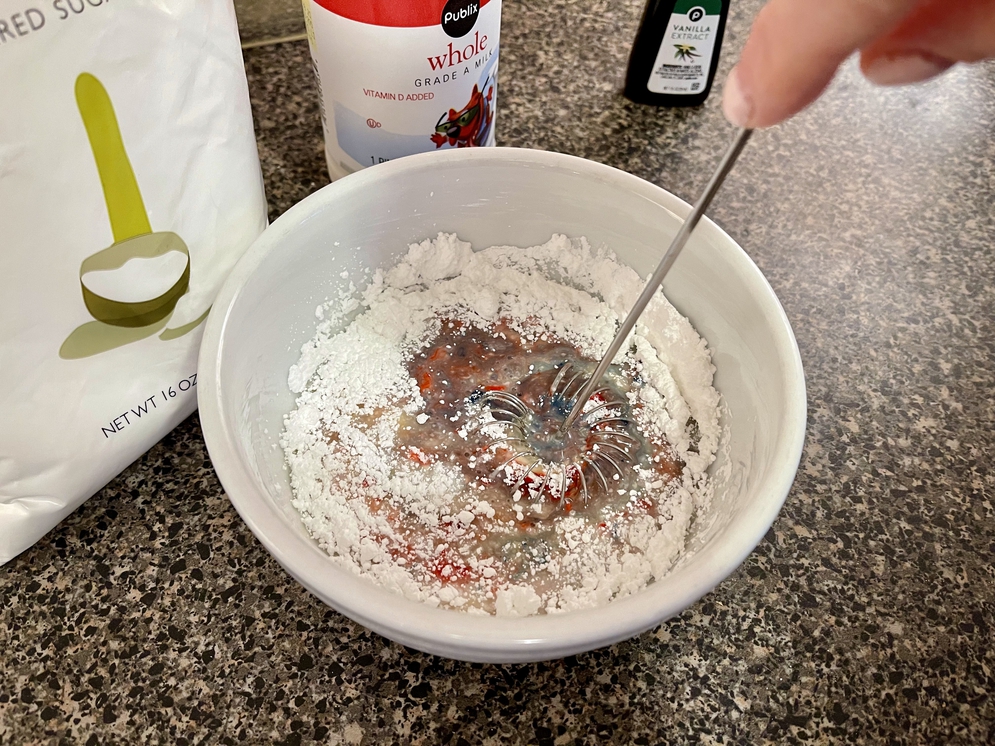 While the rolls were rising, I whipped up the simple sugary icing called for in the recipe. If you have a cup of confectioners’ sugar, a teaspoon of vanilla extract, and 2 tablespoons of milk on hand, you have icing. Simply give it a good whisk to ensure that the glaze-like icing is smooth, and you’re good to go. The recipe asks us to also throw in purple food coloring (or a few drops of red and blue food coloring) so that the icing resembles Ursula’s signature color. My icing color ended up being a deeper purple than the pinkish hue seen in the cookbook, but I decided to let it slide. 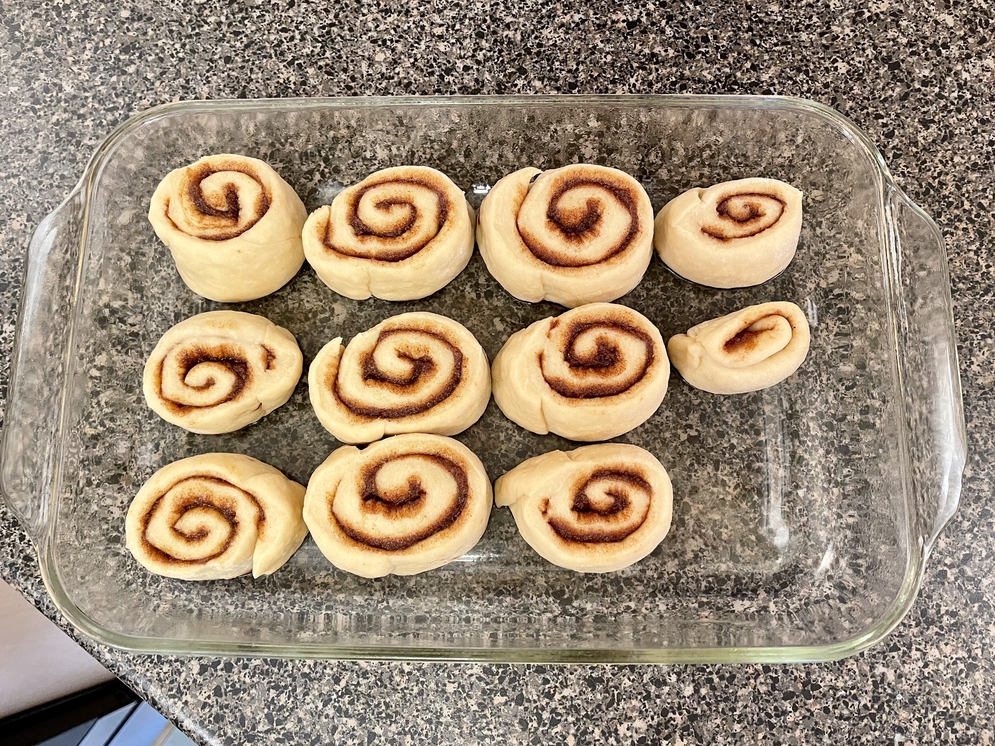 After 90 minutes, my rolls weren’t exactly doubled in size, but they were definitely bigger than they were before. I preheated the oven to 375 degrees, unwrapped my rolls, and placed the pan in the oven. We’re to give the rolls between 28 and 30 minutes to bake, or until they’re golden brown. I set the timer on my phone for 28 minutes. After cleaning up the kitchen, I began reading through a bunch of information that had been released by Disney, and I somehow missed my phone’s timer going off. I’m not sure how that happened, but it did. Thankfully, I believe that I missed the timer by only and minute or two, so, while the rolls were a bit darker than “golden brown,” I was hoping that they’d still be okay. They were more than okay.

I allowed the rolls to cool for just a minute, lifted one out of the pan, and drizzled it with icing. I was hoping that they would taste just as good as they looked and smelled. And they did. 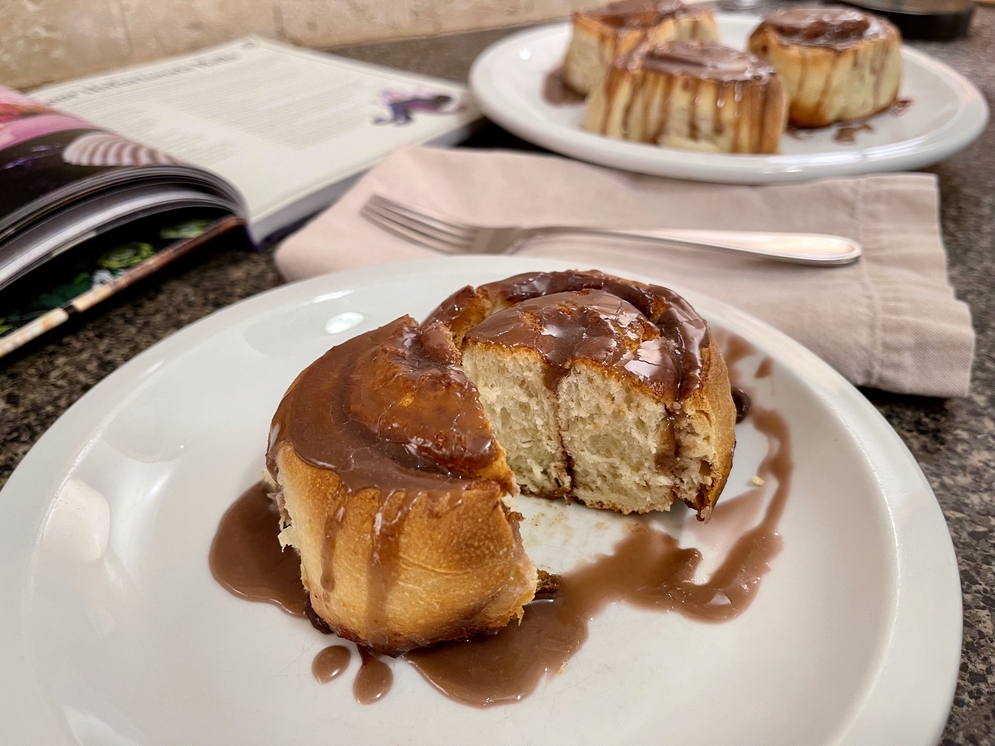 These scratch cinnamon rolls were soft in the middle and toasty on the outside. The filling caramelized just a bit on the bottom, and the overall taste was divine. 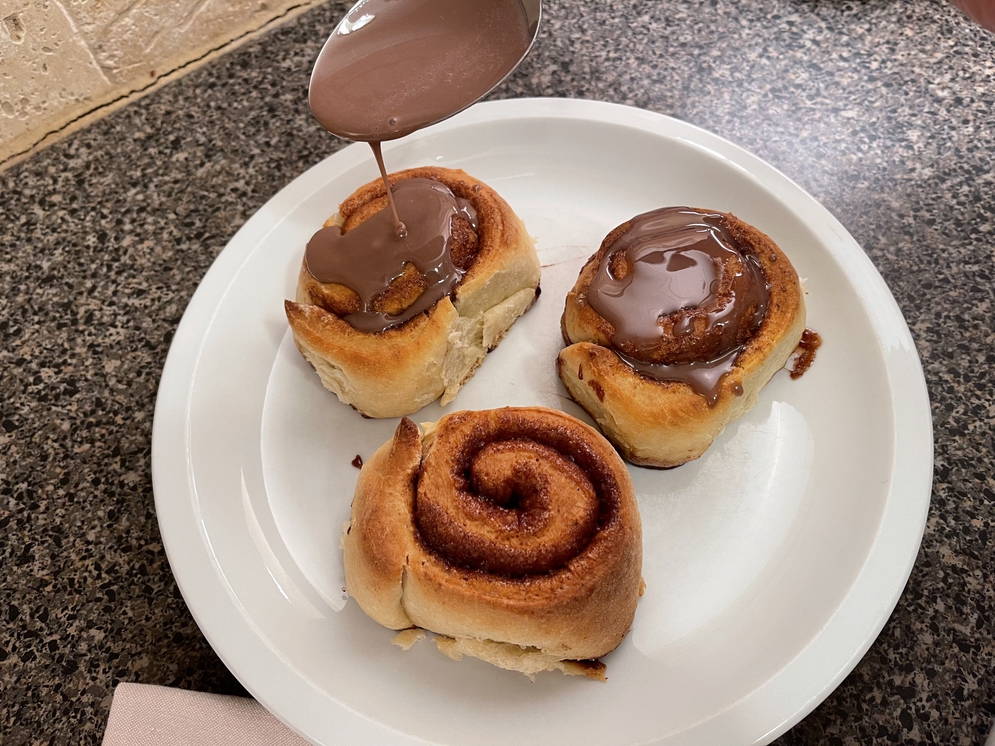 The icing provided an extra hint of sweetness; although, when I make the rolls again, I’ll be whipping up a quick cream cheese icing to slather on top of the rolls. 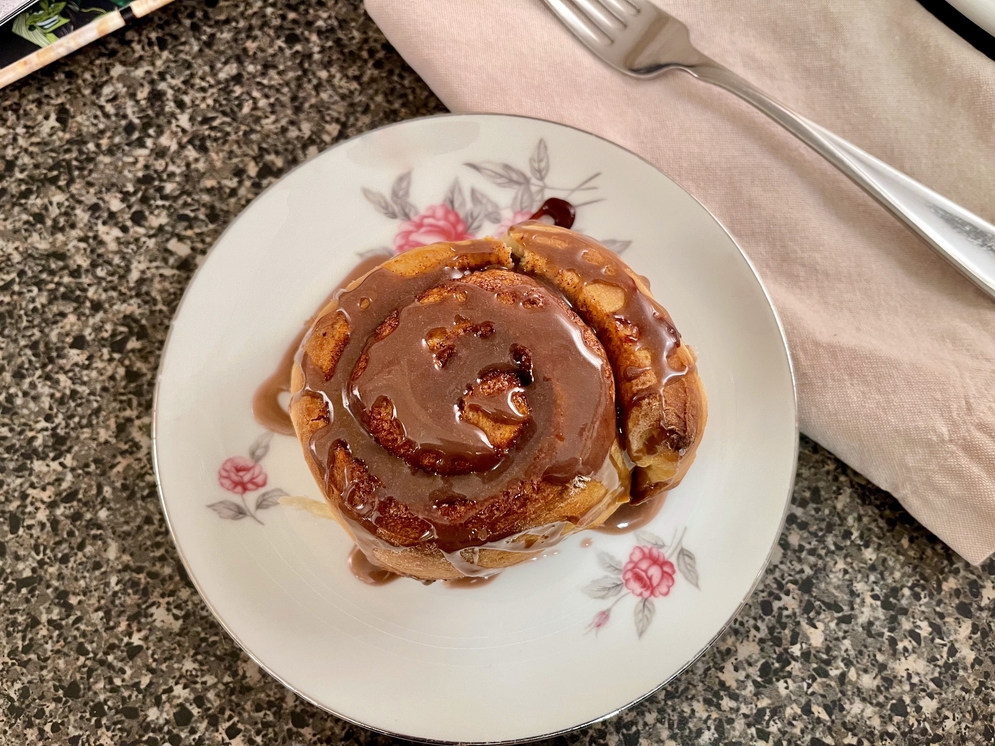 The rolls were easy to make, and so much fun to eat. And I just reheated one in the microwave for lunch, so I can attest that they are still yummy the next day.

So today, we have two winners: the new Disney Villains Devilishly Delicious Cookbook and Ursula’s Poor Unfortunate Rolls. I’m happy that the cookbook’s author, Julie Tremaine, came up with a recipe for cinnamon rolls that wouldn’t eat up the large majority of a day and I’m proud of myself for taking a chance and making them. And I’m sure that the president of the Cinnabon company would be proud, too. Ahem.

Whatever you’re up to this weekend, I hope that it’s covered in moments of fun and friendship. And maybe a little something sweet, too. Have a great one, friends!

Ready to channel a bit of Ursula in your own kitchen (minus the tentacles, of course) this weekend? Today’s recipe is below:

Ursula boasts that she helps “poor unfortunate souls,” though her idea of being helpful is anything but! Once ensnared by the sea witch, these souls have little hope of escaping her clutches. Like Ursula’s promises of beauty, happiness, and love, the cinnamon rolls are oh, so tempting. If you can’t find purple food coloring, combine red and blue until you achieve the desired hue.

For the cinnamon rolls

As Home Equity Rises, So Does Your Wealth