MASON, Ohio — Twin 13-year-old brothers Kayde and Liam Keffer are calling Ohio home for the summer as they star in Kings Island’s ‘Off The Rails.’

This young performer at Kings Island isn’t one of a kind. In fact, he’s got a twin brother who he shares the starring role with.

“He does first two, I do second two,” Liam said. “And we can always switch it up.”

The Keffer twins are originally from New Mexico, but just moved to Arizona. They’re in Ohio for the summer with their family as they entertain and amaze crowds for Kings Island’s 50th anniversary.

“It’s pretty cool,” Kayde said. “It’s kind of nerve-wracking. All the bleachers are filled, you’re kind of scared. But you get in your comfort zone once you get started.”

The Keffer twins are hopeful to grow the sport of scootering (Tino Bovenzi/Spectrum News 1).

The show centers on a boy who’s too afraid to drop-in on the big vert ramp, but as the show progresses, he gets encouraged by other performers and the crowd. The twins hope, just as their character is encouraged in the show, others can try scootering.

“A lot of people don’t know what scootering is,” Kayde said. “It’s not very big. We’re trying to get it into the Olympics in four years, maybe.” 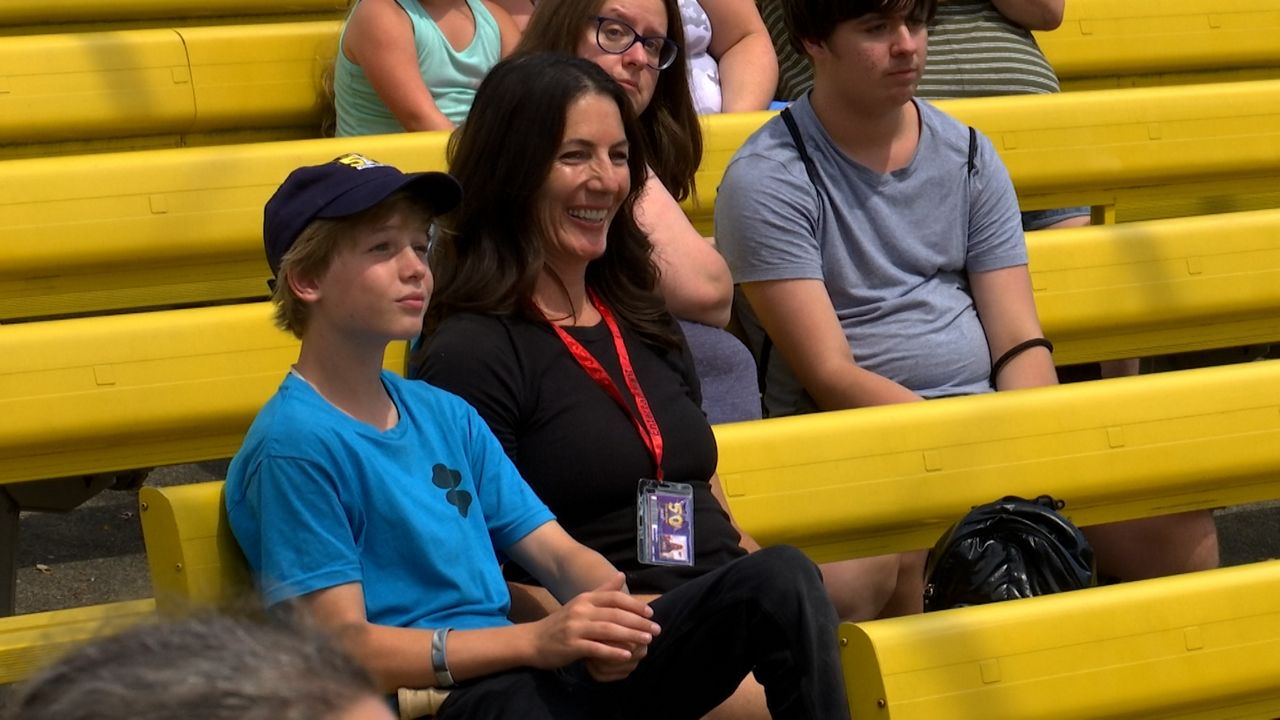 Their mom Lisa said she’s not scared the boys will get hurt, but is very proud of what they’re doing at such a young age.

“When they first started the show, they thought they would initially just be riding,” Lisa said. “Then they found out they had the lead role in the act, and it’s the biggest show Kings Island has done. So it would have been easy to say: ‘Hey, I’m not qualified,’ and bow out. But they took the challenge, they thought about it and they committed fully to learning and getting better — and man, that makes me so proud.”

More than 30 performers are in the show that’s filled with music, dancing, drummers and high-flying action — which Kings Island hopes is a good change of pace for the golden anniversary season.

“From scooters to BMX bikes to tight-rope walking and trampolines — you can’t get any better than ‘Off the Rails’ here at Kings Island,” Kings Island Director of Communications Chad Showalter said.

Kayde and Liam are having a blast performing in the show, which is highlighted by a big front flip, but interacting with the crowds after the shows is one of the things the boys enjoy the most.

“It means a lot like especially when kids come up to me, giving me high fives, saying ‘You guys are so awesome!’ Means the world to me giving me big hugs and stuff,” Kayde said. “It’s really cool.”

‘Off The Rails’ can be seen four times a day Monday-Friday, but there are no shows on Wednesday. To fine more information, click here.

Beyoncé on verge of Grammy history

How to watch the Grammys live (including the red carpet)