Cults
Cults, the dream-pop duo of Madeline Follin and Brian Oblivion, return to Central Florida for a postponed tour date behind their fourth album Host (2020). Host differs from albums past with singer/multi-instrumentalist Follin contributing her own music to the songwriting process, in collaboration with Oblivion and producer, Shane Stoneback. Hypnotic melodies accompany themes that include parting with what no longer serves you to make room for those people, places and ideas that are better aligned. “Writing these songs helped me learn to be OK with putting myself out there, with having the confidence to express what I want and what I won’t accept when it comes to personal relationships,” shared Follin via Bandcamp. Join them.  — Nicolette Shurba

Red Hot Chili Peppers
Like a cockroach, the blend of Flea’s funky bass and Anthony Kiedis’ punky SoCal scatting will outlive almost anything in pop. Tastes have changed, pandemics have descended, yet there will always be a sizable squad primed to lose their minds to “Trinidad’s got it bad for Tobago, take me to the lake where we do the avocado.” The loyal RHCP massive will descend on Camping World Stadium this week when the Peppers hit Orlando as part of a 32-date world tour. And even if a few of the live vids sadly made their way onto the Catatonic Youths Instagram, fans of the funk will get more than their money’s worth with weirdo funk god Thundercat opening — a subtle passing-of-the-torch moment. Also, the Strokes will be there and even we can admit that’s pretty cool. Is this it? Yes.  — Alex Galbraith

Bomba Estéreo
With an eclectic and bombastic style, Colombia’s Bomba Estéreo is a unique Latin music act known for their multidisciplinary techniques in composition, alongside melodies and vocals that are tricky to place solely in the “Latin pop” category. Their discography spans 15 years, with songs like 2015’s “Soy Yo” appearing in commercials, movie soundtracks and videogames, as well as collaborations with acts including Tainy, Will Smith and Bad Bunny — they featured on El Conejo Malo’s “Ojitos Lindos,” which has been streamed about 534 million times on Spotify. And now Orlando gets the chance to say “somos nosotros.”  — Lynnette Cantos

Kevin Hart
Superstar comedian and current top-billed actor Kevin Hart hasn’t been out on tour in a while. Between the pandemic and Hart’s TV and movie career, it’s been several years since the one-time road warrior toured the big rooms that he regularly filled. That’s all changed now, with Hard bringing his “Reality Check” tour to the Amway Center this weekend. “I am hype as shit to go back out on tour. There is nothing better than making people laugh … I’ve been cooking up something special and have thoughts I need to get off my chest,” Hart shared in his tour announcement. FYI: Hart is asking audience members to lock their mobile devices in Yondr pouches.  — AG

Rock & Roe
Orlando concert promoters Montgomery Drive and Red Eye Booking host a “Rock & Roe” benefit show with local bands Saturday to raise money for the Florida Access Network. The lineup for the night includes the Quilts, the Pheromones, Surf Witch. Sky Navi, Real Men, Bitters and Pretend Everything. The homegrown, nonprofit Florida Access Network funds abortion care and provides resources and support to those needing an abortion, as part of a larger (and admirable) mission of collective liberation.  — MM

Camilo
On his titular worldwide tour, Camilo will make his first appearance in Orlando and perform at the Amway Center less than a week after the release of his latest album, De Adentro Pa Afuera. The Colombian singer-songwriter’s lyrics are wistful, heartfelt and romantic, adding modern Latin pop touches to classic cumbia sounds. Since winning Colombia’s version of The X Factor back in 2007, Camilo has earned his stripes in the industry after co-producing with artists like Becky G, teaming up with Alejandro Sanz for the ballad “NASA,” and winning a Latin Grammy in 2020 for his remix version of “Tutu” featuring Colombian icon Shakira.  — Lynnette Cantos 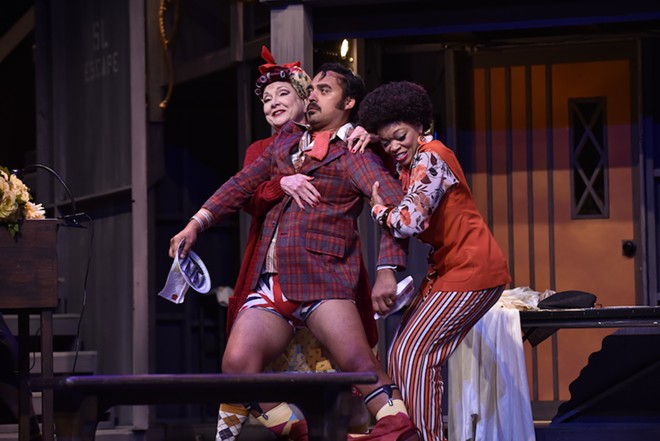 “Noises Off” at Orlando Shakes through Sept. 25

Young Frankenstein
Frederick Frankenstein hopes to carry on his grandfather’s legacy of bringing a corpse back to life in this popular horror parody musical. Osceola Center for the Arts, 2411 E. Irlo Bronson Memorial Highway, Kissimmee, $24-$29, 407-846-6257.

Dog Man: The Musical
A hilarious and heartwarming new production following the chronicles of Dog Man, who — with the head of a dog and the body of a policeman — loves to fight crime and chew on the furniture. Orlando Repertory Theatre, 1001 E. Princeton St., $15-$25, 407-896-7365, orlandorep.com.

Locomotion
An 11-year-old boy struggling in foster care after the deaths of his parents discovers that poetry helps him express his feelings about that tragedy and his new life. Orlando Repertory Theatre, 1001 E. Princeton St., 407-896-7365, orlandorep.com.