Brian Morrow has spent the last 23 years working on massive theme park lands and attractions. This year he took those skills and applied them to small-scale “tablescapes” on the reality show, “Table Wars.”

This year, he spent six weeks in New York, at the height of the pandemic, competing against seven other designers in the HGTV tablescaping competition hosted by actress Tamera Mowry-Housley, and judged by television personality Martha Stewart and event planner and designer Chris Hessney.

Attractions Magazine spoke with Morrow to find out how he went from roller coasters such as mega-thrilling Mako to dinner tables; get a few behind-the-scenes insights into the world of reality shows; and discover whether or not fierce competitors can become lifelong friends.

How did you become a contestant on the “Table Wars” series?

It happened back in March of 2020, at the beginning of the shut-down. I got an inquiry from LinkedIn, from a casting director, saying, “We think your background is really interesting. We’re casting for a new competition show for HGTV. Would you be interested?” I was like, this has got to be spam. This can’t be real. So I let it sit for a couple of days, and then I said, “I’m going to email. Let’s see what happens.”

Come to find out, totally legit. This is the company that does Chopped and other competition shows, and it was for competitive tablescaping. 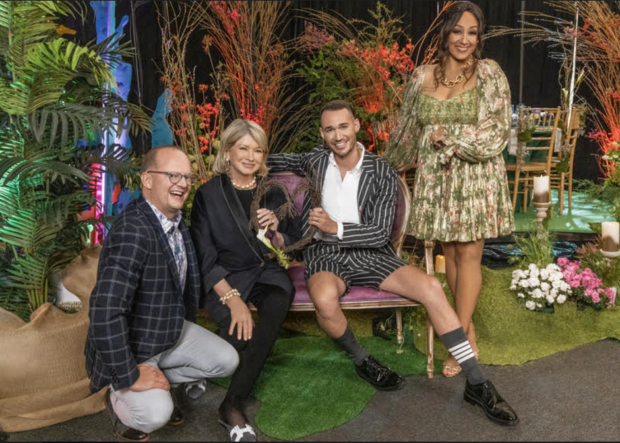 Brian with the judges and host of “Table Wars.”

I told them, “I don’t know anything about flowers, I barely know much about place settings. Why are you interested in me?” They said, “Because we want the show to be filled with creative people that can apply their skills to this new art form.”

Was it hard to get your head around creating table settings after working on theme park lands and attractions?

It’s not that different. In theme park work, we apply our skills to all categories of things — animal exhibits, roller coasters, buildings, retail, bathrooms — so it wasn’t difficult to apply my skill set to this set of parameters and objectives. Technically, I didn’t know the names of flowers, I didn’t know where to put the knife. But I’m clever enough to figure these things out quickly, and learn. My scenic skills are very strong, I know how to build things. All those things helped me excel through the program.

They put people from creative backgrounds in this bubble, and said, “Here. Figure this out.” And some people knew, but most of us didn’t. We learn, officially, from queen Martha Stewart, how to do this. From there on, they hold us to the inch.

We were vaccinated, but they still had Covid protocols in place for filming. We spent two weeks in an Extended Stay hotel suite, in quarantine, getting tested every day. The filming took four weeks, and we would do an episode about every three days. If they say there is an eight-hour challenge, usually that was done over two days. Sometimes we would have 12 hours, 14 hours. We would film sometimes three days straight, sometimes six days straight, so it was pretty intensive.

Was it difficult to be quarantined for the duration?

All throughout the show, all I wanted to do was go to a restaurant, and sit down and be served food that I didn’t make myself, or come from a catering truck. I wanted a martini in a glass, and a napkin. [The] first thing I did was go out to eat dinner when it was all wrapped up. I could make [a martini] myself, in my apartment, but it’s just not the same.

What is it like working in such a small-scale environment when you’re used to building on a large scale?

I didn’t realize how close the cameras were going to get to our work, and how detailed the judges would be studying it, because I’m very used to broad strokes. It took me a couple challenges to figure that out, and about mid-way through the show I changed my process. When we all scatter to get materials, I never went to the table setting stuff. I always went to the scenic; the carpentry and the build stuff.

I would always end up with my table stuff lacking, because I wasn’t that interested in it from a design perspective. I had to change it, because that’s really what the focus was on, so I forced myself to go to flatware and dishware first, and stopped getting stuck with mismatched silverware because everyone took everything.

I’d starting painting plates to make them all match, and everyone lost their minds. They didn’t like that, so they made us stop because somebody could copy us at home, and it’s not safe, obviously, to spray-paint your dishware!

What was it like working with another designer on the second challenge?

The most difficult part of working with another designer on that show was, we did it very early on. It was the first day when we got paired up on that second challenge. I didn’t know Yas [Quiles]. We had only seen each other for 40 hours. That was probably the trickiest thing. How do you work with a stranger?

It was one of my favorites because Yas is an incredibly sophisticated, elevated designer, because she doesn’t come from ‘theme park world,’ she comes from ‘luxury brand world,’ which I don’t do at all. Her approach and her process of thinking is very different than mine.

To be honest, I kind of took a step back and let her lead, initially, with some of the design thinking, and then I said, “Your idea is great! I love this. Let me make it better by building a world around it.” I started drawing scenic, and set-pieces, and rooms, and walls — things that she didn’t have any idea how to do. 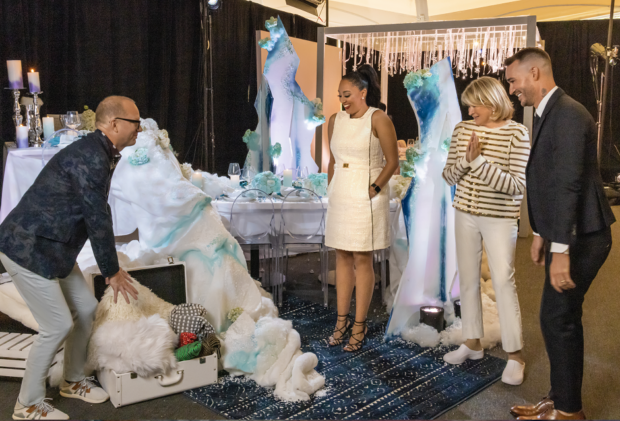 What kind of artistic temperament do you need for a challenge like “Table Wars”?

Where I found my greatest success was relying on all my years of building giant projects, and how complex and nerve-wracking, and complicated they are. I was able to see the problem in front of me in this smaller challenge, and know that it wasn’t going to work. How to stay calm and not go insane.

If I had carpenters working for me that were struggling or going slow, I don’t react with yelling and screaming and pounding my fist, I react with “How can I help?” or “How can I change my design?” so that they’re more successful.

Other competitors sometimes would approach differently, with a little bit more anger or frustration. I wouldn’t let any of that show, because I know from leading teams, that doesn’t drive any team forward.

What surprised you about filming a reality TV show?

It is a lot more real than I ever thought it was going to be. There is no scripting, and there is very little guidance or direction on anything. It is literally, “Here’s your challenge. Go finish it. See you at the end.” You are really left alone, and you are allowed to present yourself and talk however you want.

The judges were highly authentic and real with us, genuinely kind and caring. When they placed a challenge on us, or changed the rules, or added something to the challenge mid-way, they knew what they were asking was difficult, and they could see how tired we were, so they had a lot of empathy, which was lovely, but that’s the game. It’s a TV show; it has to look hard.

They were really interested in learning about each of us as individuals, and they would also come over and teach a little bit, which was really nice for people like me that don’t know the right way to cut a rose. I do now. I’m an expert at rose cutting.

What did you take away from the experience on “Table Wars”?

This was an opportunity to be placed in a position of relying only on myself, which is really important because I’ve always worked in teams. But here I’m alone, so I draw, I create, I build, all alone. They gave us help, like carpenters, but I was really responsible for my own journey, and I wanted to make sure that I could do those things alone.

That was the thing I was most proud of; it just fired off my brain in a way that traditional work in the theme park or entertainment business couldn’t have done. I don’t have clients. I was the client. It was really invigorating, horrifying, and exhilarating at the same [time]. I came back a better designer and a better Brian.

To find out who wins the title of champion and a $50,000 prize, stream “Table Wars” on Discovery+ or download the HGTV Go app for iPhone, iPad, or Apple TV.