Quassy Amusement & Waterpark recently opened the single largest investment in the park’s 113-year history, Rocket Rapids water coaster in Splash Away Bay. We sent our kid reporters out to check it out, and to learn more about the park’s history.

“This incredible new ride will cost more than our Wooden Warrior roller coaster, which opened a decade ago,” Quassy President Eric Anderson noted. “It will really take the waterpark experience at Quassy to the next level.”

Designed by ProSlide Technology, the ride incorporates the company’s patented RocketBlast water jet propulsion system. The high-pressure jets push two-person rafts up three separate inclines along the fast-paced ride. In addition, Rocket Rapids features four ProSlide FlyingSaucer elements for high-speed accelerating banked turns. The attraction is more than 600 feet in length and has a capacity of 340 people per hour.

This brings the number of water slides in Splash Away Bay water park, all provided by ProSlide, up to 16. The new ride is located in an area where the park’s Lakeside Pavilion used to be. It also incorporates additional cabana rentals. 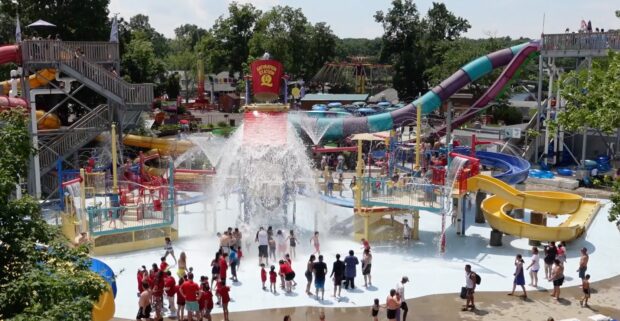 The waterpark was officially branded Splash Away Bay in 2013 with the addition of three large water slides and a splash pad for younger children. Two other additions followed, including Slide City in 2016 with five elements for younger children, and Category 5 Rapids – Extreme Waterslides in 2018, which are three huge rafts rides that launch from one tower.

Splash Away Bay is adjacent to Quassy Beach on Lake Quassapaug in Middlebury, Conn. and is included in the park’s all-day wristband. For more information about Quassy Amusement & Waterpark visit quassy.com.