Recently, The Attractions Magazine team was invited to test our skills at “The Depths,” the newest Escape room offering at The Escape Game Orlando.

This is the seventh room at the venue, which is located on International Drive in Orlando, Fla. Having already tried several of the rooms at The Escape Game and being impressed with the levels of immersion and theming, our expectations were high and “The Depths” did not disappoint!

In “The Depths,” your team takes on the role of submarine explorers sent on a mission to explore a rumored undersea laboratory. You goal is to pilot your sub to the facility, recover any research available, and get back to the surface.

You’re given your mission and updates through video messages from Dr. Leah, your boss, who goes into great detail about what you have to do and why. Of course, you only have one hour to do all of this, though the exact reason why this is lost in the exposition. 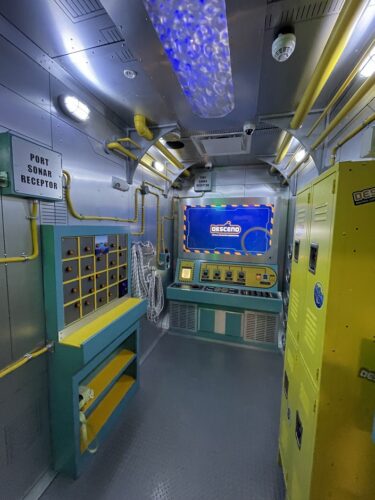 Our team was informed that the clock would not stop during these messages, but that the video times were already accounted for in the total time the room should take. This did not stop our sense of anxiety waiting for some of these videos to end while seconds ticked by.

It’s not a spoiler to say this room takes place both on the submarine and the research facility deep in the ocean. Both areas were themed really nicely, with plenty of attention to detail that, thankfully, never wasted too much time as red herrings.

The rooms do require a certain amount of suspension of disbelief common to all escape rooms. You really shouldn’t bother asking why the controls to the sub are hidden behind puzzles left scattered around the room, and on seemingly random notes.

Our team of five managed to escape in roughly thirty minutes with no clues used. We are a very experienced team of escapers, so our time may not be common for people who have not done as many rooms, but this experience was certainly not the easiest we’ve ever completed.

The nice variety of puzzles meant that different members were able to shine at deciphering, mathematics, and physical challenges.

The room follows a story line, which we enjoyed, although we felt that the climax of the experience was lacking a little “something extra” to make it a bit more exciting. We found ourselves in what were meant to be the most intense moments, just kind of waiting around for the next thing to happen.

All told, we enjoyed this room very much and recommend it for mid-level players who enjoy good theming and a nice puzzle variety. The Escape Game Orlando team are professional and helpful and the facility is very well appointed.

For more information or to book tickets visit TheEscapeGame.com.