“Our first Disney exhibit with the Archives — for their 50th-anniversary — was such a success and it was so much fun working with Disney that we said, ‘what can we do next?’” said Bowers Museum President Peter Keller.

What they’re doing next is an entirely new, specially-ticketed exhibition that explores how filmmakers use jewelry to tell stories by offering a closer look at how crowns, watches, rings, and necklaces have added extra sparkle to some of our favorite movie moments.

“Everything at Disney is about storytelling,” says Walt Disney Archives Director Becky Cline. “So, the story here is about what costume jewelry is, why it’s used — and how it’s used — and what it tells us about the characters and stories in the films. Then we picked the pieces in our collection that represented and showcased those stories the best.”

All That Glitters: Crowns & Tiaras

Many popular Disney characters are royal, so it’s no surprise that “All That Glitters: The Crown Jewels of the Walt Disney Archives” includes an extensive collection of crowns, including the tiara worn by Mia Thermopolis (Anne Hathaway) in “The Princess Diaries” (2001) and the coronet worn by Queen Clarisse Renaldi (Julie Andrews) in “The Princess Diaries 2: Royal Engagement” (2004).

Other notable headpieces are the tiny crown that perched on the massive head of Iracebeth (Helena Bonham Carter) in “Alice Through the Looking Glass” (2016), the golden horned crown worn by Loki (Tom Hiddleston) in the 2021 Disney+ series “Loki,” and the four crowns worn by Peter (William Mosely), Susan (Anna Popplewell), Edmund (Skandar Keynes), and Lucy (Georgie Henley) at the end of “The Chronicles of Narnia: The Lion, the Witch, and the Wardrobe” (2005). 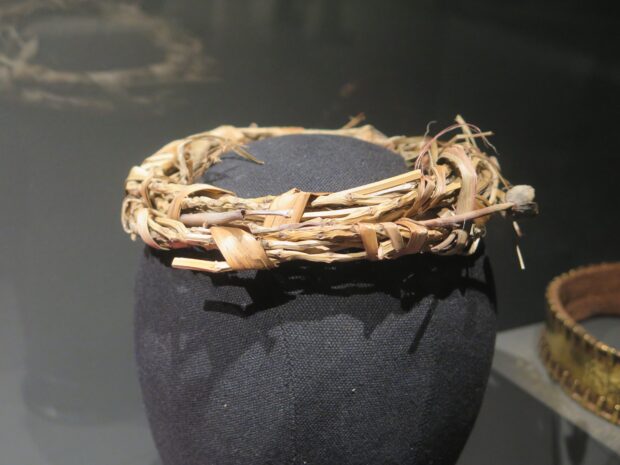 Significantly less opulent but equally important from a storytelling perspective is the humble crown worn by Chuck Noland (Tom Hanks) in “Cast Away” (2000).

All That Glitters: Watches

They may seem ordinary, but watches have played essential roles in many Disney films, from the radio watch worn by Warren Beatty in “Dick Tracy” (1990) to the pocket watch used by Ian McKellen as Cogsworth in the live-action “Beauty and the Beast” (2017).

Other pocket watches in the collection belonged to Alice (Mia Wasikowska) in “Alice Through the Looking Glass,” P.T. Barnum (Hugh Jackman) in “The Greatest Showman” (2017), and Admiral Boom (David Warner) in “Mary Poppins Returns” (2018). However, Keller notes, a particularly interesting pocket watch — or pair of watches — was used by Johnny Depp in “Murder on the Orient Express” (2017).

“Two were made of the same watch for ‘Orient Express’ because [Johnny Depp] got shot, and the bullet went into his watch, so they had to have two versions,” he explains. 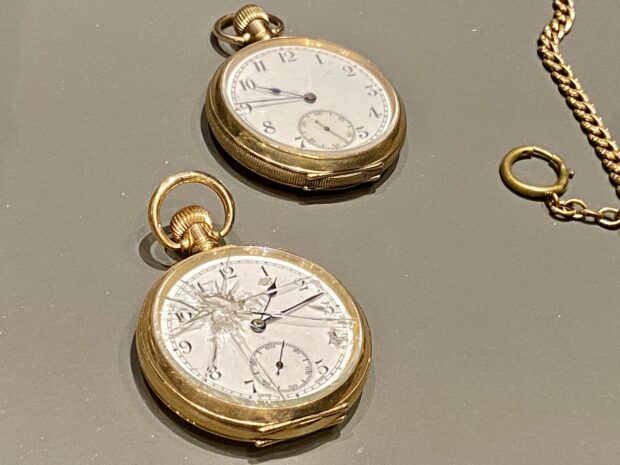 All That Glitters: Necklaces & Pendants

Many of the necklaces in the exhibition are also keys to their movies’ stories, including the gold pirate Medallion necklace worn by Elizabeth Swann (Kiera Knightly) in “Pirates of the Caribbean: Curse of the Black Pearl” (2003), the spectacular “Heart of the Ocean” necklace from James Cameron’s “Titanic” (1997), and Baroness von Hellman’s ruby necklace from “Cruella” (2021).

Also on display are two iconic pieces from the Marvel universe: “The Eye of Agamotto” worn by Benedict Cumberbatch as Doctor Strange in “Avengers: Infinity War” (2018) and a neckpiece worn by Michael B. Jordan as Erik Killmonger in “Black Panther” (2018).

All That Glitters: Rings

Rings can signify different things depending on whether they’re worn by a wizard, a rebel, a pirate, a red queen, or a scarlet witch. Among the rings included in the exhibition is the magical dragon ring worn by Balthazar Blake (Nicholas Cage) in “The Sorcerer’s Apprentice” (2010) and both open and closed Rebel rings worn by Rose Tico (Kelly Marie Tran) in “Star Wars: The Last Jedi” (2017). 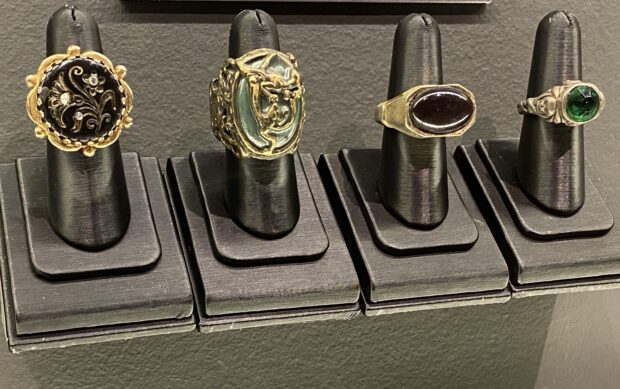 Also showcased are collections of rings worn by Captain Jack Sparrow (Johnny Depp) in “Pirates of the Caribbean: The Curse of The Black Pearl” and “Pirates of the Caribbean: Dead Man’s Chest” (2016), by Iracebeth/The Red Queen (Helena Bonham Carter) in “Alice Through the Looking Glass,” and by Wanda Maximoff/Scarlet Witch (Elizabeth Olsen) in “Avengers: Infinity War.” 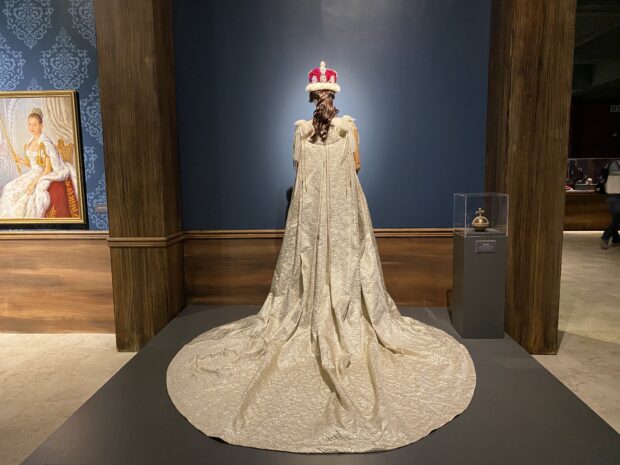 Although not a costume exhibit, “All that Glitters: Crown Jewels of the Walt Disney Archives” showcases several never-before-displayed costumes with their iconic accessories, including Mulan’s matchmaking outfit from Disney’s 2020 live-action film, the Genie costume and lamp from “Aladdin”(2019), and Princess Mia’s coronation cape, orb, and crown from “The Princess Diaries 2: Royal Engagement.”

“We have so many wonderful things in our collections, and some of them are very small, but they’re so important to Disney films,” Cline says. “This brand-new exhibit celebrates a lot of special pieces that we’ve seen on film, but […] they don’t always get the attention they deserve […] so we thought it would be fun to celebrate them.”

On Dec. 12, 2021, a panel discussion and book signing with Walt Disney Archives Director Becky Cline will begin at 1:30 p.m.

Click here for more information and to purchase tickets.