Many guests go home from a day at Disneyland with a souvenir or two, but Scott Rummell has 45,000. Rummell’s collection – one of the largest collections of Disney park memorabilia ever assembled – will go on the auction block during “Disneyland: The Auction” at Heritage Auctions in Beverly Hills, Calif. on May 21-22, 2022, and includes original park-used vehicles from Rocket Jets, Mr. Toad’s Wild Ride, Autopia, and the Skyway.

Rummell, a professional voiceover artist who served as Disneyland’s PA announcer in the 90s, started his “hobby” when, after learning his wife had about 20 Donald Duck items, he thought it would be a fun thing to collect together – but not just Donald Duck, anything that had the Disney name on it. As the collection grew, the Rummells’ house became a Disney Museum – they even called it the second happiest place on earth – but all good things must come to an end, and a decision to downsize means lucky Disney fans now have the chance to own these very rare Disneyland items.

“I obviously went a little bit crazy with 45,000 items. I get that,” Rummell said. “But I feel like there’s so many cool pieces that I just hope that the collection continues to bring joy to people.”

What’s in the “Disneyland: The Auction” catalog?

Disneyland Park-Used Original Rocket Jets Vehicle (Lot #98119) – For almost 30 years, the Rocket Jets stood as a focal point of Tomorrowland. This original ride vehicle is one of the sleek white and black rockets that replaced the Astro-Jets in 1967 as part of the New Tomorrowland refurbishment, and few of these vehicles have ever been offered for public sale (Current Bid: $11,000). 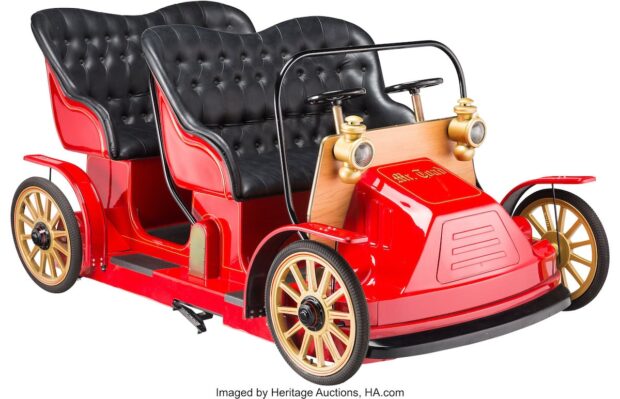 Disneyland Park-Used Original Autopia Car (Lot #98100) – This original Autopia car was used at Disneyland and acquired directly from the park. Autopia’s vehicles were designed by Disney Imagineer Bob Gurr, who reportedly fashioned this generation of the car to have a front-end inspired by a Corvette Stingray and a back-end inspired by an Opal GT. What makes this particular vehicle so special is that it’s believed to be the only Autopia vehicle ever to come to auction with all original components present, including the chassis and tires. The only thing missing is the engine, which was not allowed to be sold for safety reasons (Current Bid: $16,500). 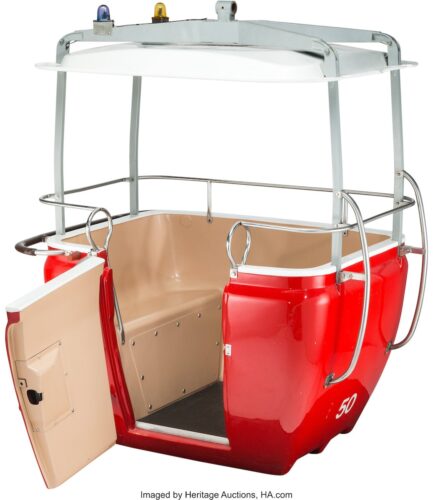 Park-Used Original Skyway Gondola (Lot #98071) – The Skyway traveled above Disneyland from1956 until 1994, but in 1965, the original round Skyway gondolas were changed to rectangular versions. Rummell’s bright red gondola has the original bucket, seats, rails, roof, paint, and lights. Making this piece even more remarkable is that it’s believed to have traveled over both Disneyland and Walt Disney World. The gondola shows wear from age and use, and there are some scratches on the side panel from where it pulled into the station, which adds to its authenticity and nostalgia (Current Bid: $14,000).

But That’s Not All! 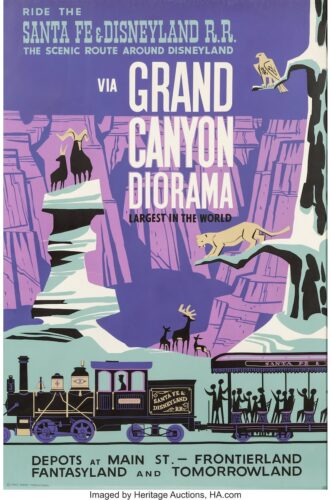 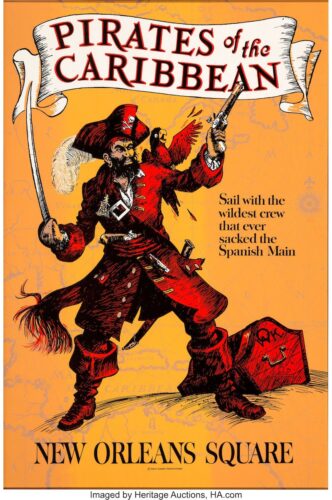 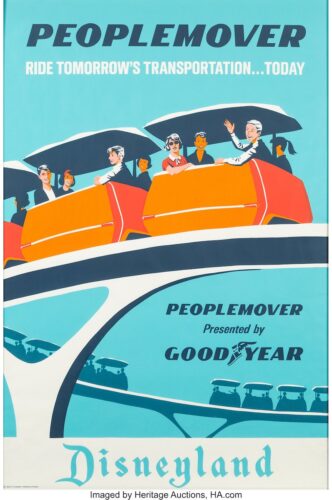 Heritage Auctions Vice President and Director of Animation and Anime Art Jim Lentz notes the sale also includes a huge selection of park-used signage as well as one of the largest and most significant collections of Disneyland park attraction posters, including hand-silkscreened posters for Rocket Jets, Tom Sawyer Island, Grand Canyon Diorama Matterhorn Bobsleds, Skyway, Alice in Wonderland, Pirates of the Caribbean, the Monorail, and two different PeopleMover posters. 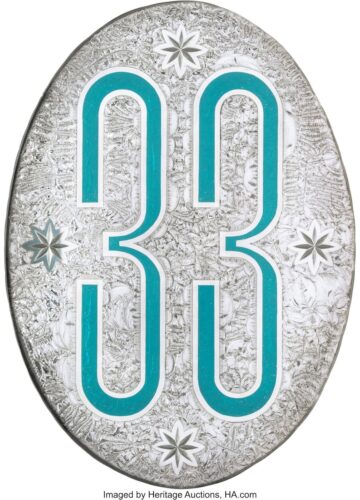 Another “Disneyland: The Auction” highlight is the Original Club 33 Sign (Lot #98193) that marked the entrance to the most exclusive, most coveted, and most desirable experiences in all of Disneyland. In 2014, Club 33 underwent an extensive renovation and expansion that resulted in the entrance being relocated, and this beautiful glass sign – previously the only identifier of the club’s existence – was removed. There have reportedly been only three Club 33 signs throughout the club’s history, and this is believed to have been the earliest (Current Bid: $16,500). 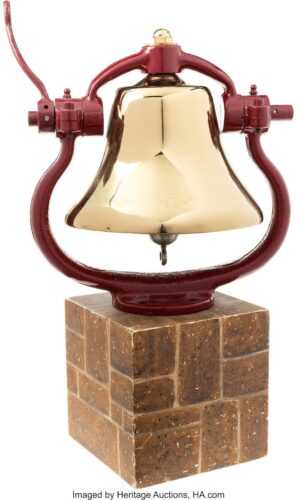 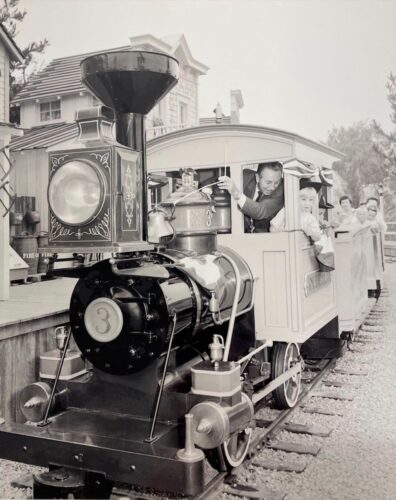 “Disneyland: The Auction” also features several lots dedicated to Walt Disney’s love of trains and the Disneyland railroad, including Disneyland and Disney World park-used drumhead signs, blueprints, actual train parts, and Lot #98025, the original bell from engine number three of Disneyland’s Rainbow Caverns Mine Train (renamed the Mine Train Through Nature’s Wonderland from 1960 until 1977 when Big Thunder Mountain Railroad took over its space). This beautiful piece of early Disney history – rung by Walt himself – was restored by the Disney Paint Department and the Disneyland roundhouse (Current Bid: $2,600).

“There’s something visceral about all of these things […] that were part of your Disneyland experience,” said Joshua Benesh, a Disney expert at Heritage Auctions. “You’re really selling a tangible memory. You’re selling a piece of magic, and that’s something that’s hard to put a price on.”

Current bids listed are as of May 10, 2022. Click here for more information.