During Attractions Magazine’s recent Q&A with Brian Morrow, he shared what the filming experience was like, what surprised him about being on a reality TV show, and some of the funny faux pas he made.

Now he has been named the show’s champion extreme tablescaper, and has been awarded the big cash first prize.

Morrow learned new skills and honed his existing talents throughout the show, but while he came in second in all but one episode leading up to the season-ender, first place remained just out of reach. He knew the final tablescape was his last chance to let his talent shine.

“There was pressure,” Morrow said of the final episode, “but when I heard the challenge was ‘Fantasy’ I knew instantly what to do. Because theme park rules always apply, I knew ‘Dragons and Castles’ would be a perfect approach to execute and make the biggest single visual impression for the judges. You know… dragons always win!”

His instincts proved correct. The elaborate Gothic castle setting he created secured him the championship win, though the victory came as a surprise.

“I knew I had done a fantastic last design, but I wasn’t sure if it was enough to secure the win, as the judges looked at our entire body of work for the show, to pick a final winner, so coming in second so many times meant I might not have secured the final win,” he said. “It was all a bit surreal to win. I really didn’t think it was on the table for me, other than my last design being very strong with the castle ruins visual language.”

What did that moment feel like? “Winning felt great,” he admitted, “like all the work to-date I had completed on the show had value, and that I was able to grow as a designer during the show. The difference between day one and the finale is starkly different in what I was able to create. [It] just proves you are never too experienced to learn new design techniques and materials.” 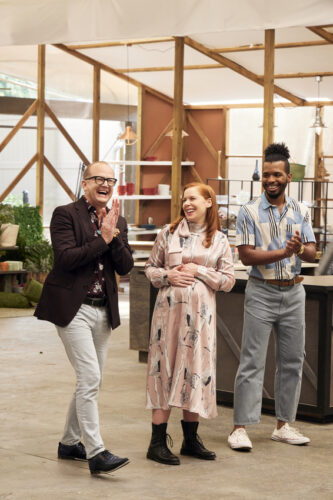 Over the course of six episodes, Morrow created a Winter Wonderland-themed ice scape based on his work on SeaWorld’s Antarctica land; a funky 1980s private party in a shopping mall during the Decades challenge; a “floating island” fit for a bride and groom in the Nature Nuptials episode; and a stunning airship blimp made from junkyard bits and pieces during the transportation-themed Party on the Move challenge.

“My most innovative table was episode five, the blimp,” he insisted. “It was a bold approach to the challenge, and I had a very clear vision in mind when creating it. One single, giant visual moment to secure a “WOW” from the judges. Plus, the reuse of old car, train, and plane parts is a category I adore playing in. I love to reimagine parts and pieces into new objects, and tell a different story to their past lives.”

It was a monumental task, made easier by the carpenters who are randomly assigned to each contestant to assist them in creating structural elements. “The blimp was nerve-wracking, due to its scale and complexity,” Morrow said, “but once I learned who my carpenters for this challenge would be, I knew we had a chance to deliver it. Once the blimp frame came into the studio space, I knew I had a solid idea that could tell a story instantly to guests, without one word of explanation — which was a repeating note other contestants got from judges — so I knew that simple visual story language was the key to success.”

In the final episode, Morrow constructed a ruined castle, with its pillars and arches covered in orchids, ivy, and other floral touches that added a distinctly romantic ambiance to the fantasy-themed setting, as a loving nod to his husband, Patrick.

The castle ruins’ piéce de résistance was its interactive element, a dragon egg that, when touched, triggered the arrival of a fire-breathing dragon just outside the castle’s Gothic window, a real “Wow” moment that came straight from Morrow’s theme-park bag of tricks. 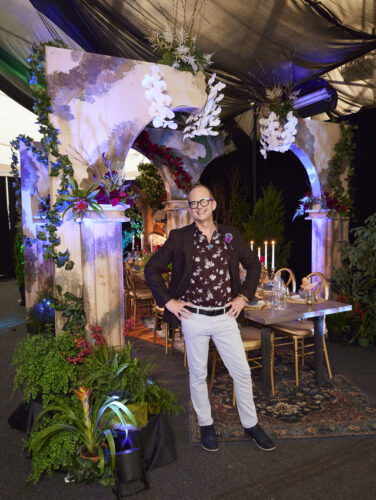 Brian Morrow stands in front of his Gothic castle-themed tablescape

While the challenges are called “extreme tablescaping” for a reason, the concept is still something viewers can do at home, and Morrow offered some tips for those who would like to give it a try.

“My advice is to start trying. Don’t stick to the normal approaches, but look in your pantry, closets, even the yard. Find objects that inspire you and then build from there. Don’t be afraid to try new ideas. Heck, I had very little knowledge of flowers or place settings when I started, but I learned and explored the materials to develop my own approach to this type of design.

“Also, do not get obsessed with everything matching. Mix your plates and flatware up — frankly, it’s more interesting, and you don’t need to go buy all new stuff. Use what you have, but in all-new ways. It can be a very fulfilling mini-design challenge right in your own home, that you can complete in under an hour. It’s a great way to activate your creative brain.”

The title of “Table Wars Champion” is grand, but what about that $50,000 prize money? Morrow has plans for the cash, too.

“On the show, I said I would spend it on my people, company, and my husband Patrick, so all that is happening,” he said. “Even this holiday season, my family is in town and I have a surprise for them. For [my] company, B Morrow Productions, well, it’s either going to be a new kitchen area, or a sprinter van. I’m going to let the studio vote on how we invest the money. The BMP studio is very transparent, and we all get a say in not only the projects we take on, but what are the next best steps to maintain and grow our business. Investing in people always pays back four-fold.

“But to be frank, I’m totally going to Dubai in January for the World Expo, and it looks like first-class plane tickets are in my future!”

From theme park land and attractions designer to the smaller canvas of tablescaping, Morrow’s talents were allowed to shine on the show, and he encourages others to push their artistic boundaries, too.

“Here’s to all the creative warriors in our industry of themed entertainment, and all the creatives wherever you might be. Go challenge yourself — you will be surprised at the results.”

To watch all six episodes and see Brian Morrow take the crown, stream “Table Wars” on Discovery+ or download the HGTV Go app for iPhone, iPad, or Apple TV.