CINCINNATI — Willie Smart Jr. has made a living as a street musician for the past three decades. It hasn’t always been easy, though.

Smart, known professionally as Brother Air, loves the freedom of being a busker—another name for a street musician—but the problem is there are few guaranteed paydays in his line of work.

Almost all of his income from playing comes from tips given to him by appreciative passersby who gather to watch him perform outside events, such as Cincinnati Reds games. The 62-year-old percussionist refers to it as “the generosity of music lovers and fans of creativity.”

Willie Smart Jr. (aka Brother Air) is a percussionist who performs on streets in cities across the country. He’s been doing in for 30 years. (Casey Weldon/Spectrum News 1)

To help promote creativity and lessen some of the financial hardship on local musical artists, the Cincinnati Music Accelerator (CMA) and Cincinnati Center City Development Corp. (3CDC) came together to create the Street Stage Project. ArtsWave serves as the primary financial supporter.

Now in its fourth year, the Street Stage Project hires local musicians to perform daily lunchtime and evening shows at several designated spots spread out across the Central Business District and Over-the-Rhine neighborhoods.

More than two dozen artists— violinists, guitarists, singers and even some brass players—will perform a total of more than 800 performances over the course of a 20-week period this summer.

The series will culminate Oct. 16 to coincide with the return of the BLINK art and light festival, which attracted nearly 1.5 million people to downtown Cincinnati the last time it took place in 2019.

“It’s a busking situation that sets up young musicians to find some success,” said Smart, best known for playing his ornate, custom drum rigs. “It’s like a gig because you’re getting paid and able to showcase your talents to new fans without having to rely on tips to get by.”

Beyond adding more live music to downtown, the Street Stage Project is a business opportunity for young artists. It aims to let them showcase their talent and hone their craft all while developing an audience.

“The younger cats like whenever they can get paid, but this is also a place for them to be creative because they don’t have to follow any rules,” Smart said. “They’re free to focus on playing their music their way, but they also know they’re going to make some money, which is always good.” 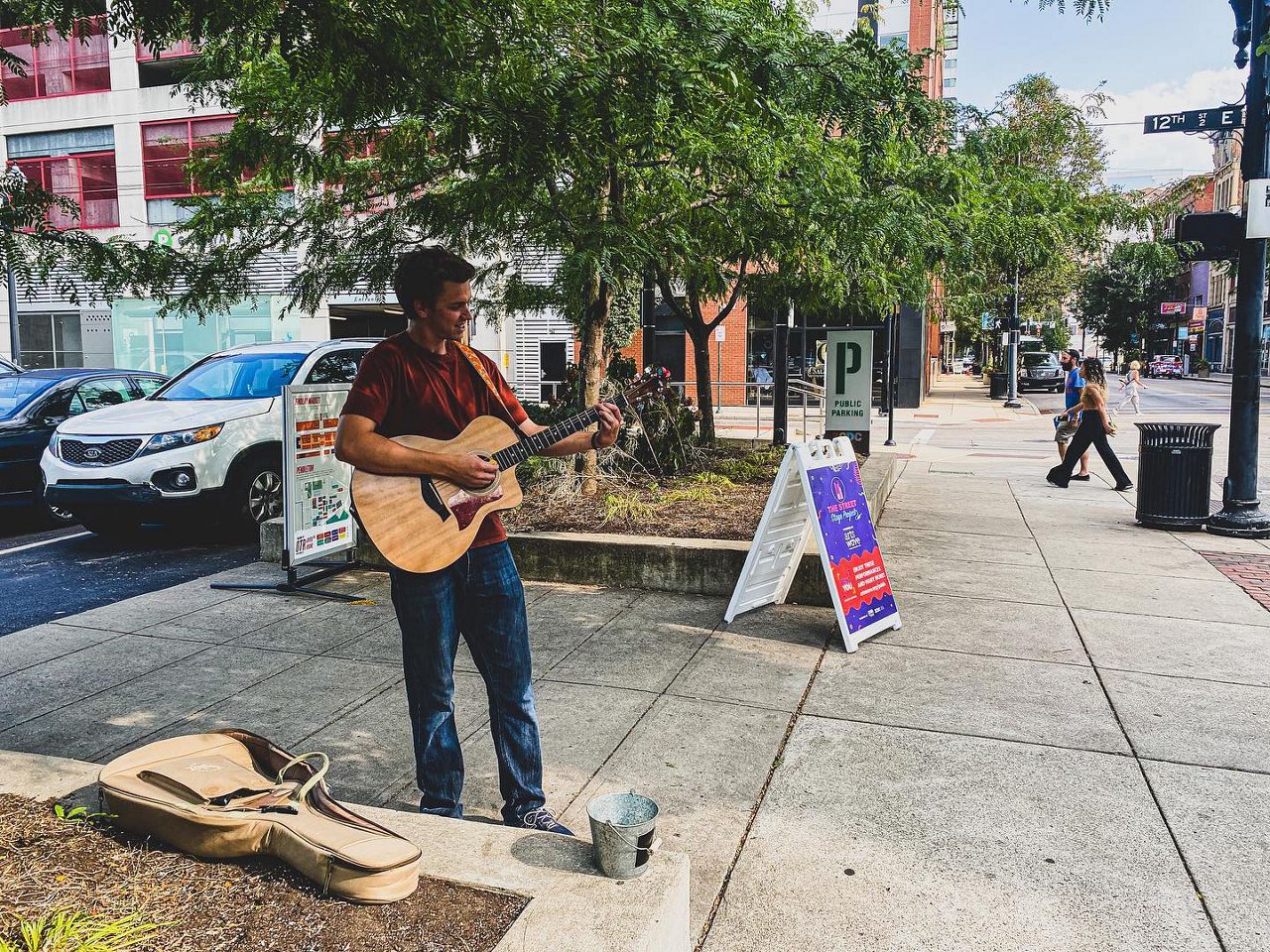 The Street Stage Project helps to promote young artists by giving them a paycheck and also providing resources to help them develop themselves as a business. (Photo courtesy of Cincinnati Music Accelerator)

Before becoming a street performer, Smart toured North America drumming for many jazz ensembles. He settled down in Cincinnati during the 1990s to focus on his family.

That’s when he went into busking full time.

Anyone who’s been to downtown Cincinnati in recent years is likely to have seen Smart pounding away on his drums.

Today, you’ll find him performing solo most of the time for events such as The Banks for Cincinnati Bengals games or outside Oktoberfest Zinzinnati. A few years ago, though, he likely would have been playing alongside his now-grown son, Haneef, who still performs.

For the past four years Smart has mostly used a custom drum-and-cowbell rig he calls “More Cowbell”—a play on the famous “Saturday Night Live” skit featuring Will Ferrell. That’s what he played during the recent Taste of Cincinnati celebration.

Most often these days he’s playing a hang, or handpan, which has a similar sound to a Caribbean steelpan instrument. He’s usually slapping on that while performing his multiple shows a week for The Street Stage Project.

“If you really want to busk, you have to travel across the country and go to all the big events and festivals,” Smart said. That means sporting events, concerts, art festivals, major happenings. “It’s not for everyone.”

That’s what makes the Street Stage Project so impactful, Smart said. It lets people try it out and see if it’s for them. He views it as a way to “meet great people and elevate the human spirit” through music.

Each of the chosen musicians comes through CMA, which operates as a self-described “music business academy.” Through the CMA music accelerator, artists learn how to monetize their talent and develop an understanding of the business side of being a professional musical artist.

The performers kicking off the series this summer are alumni of CMA’s program. They’re also looking for new acts to fill out the roster. Interested musicians can learn more on the Street Stage Project website.

”Projects like the Street Stage Project provide exposure and an opportunity for artists to demonstrate their skills to a broader audience that they normally might not be able to reach,” said Kick Lee, founder of CMA. 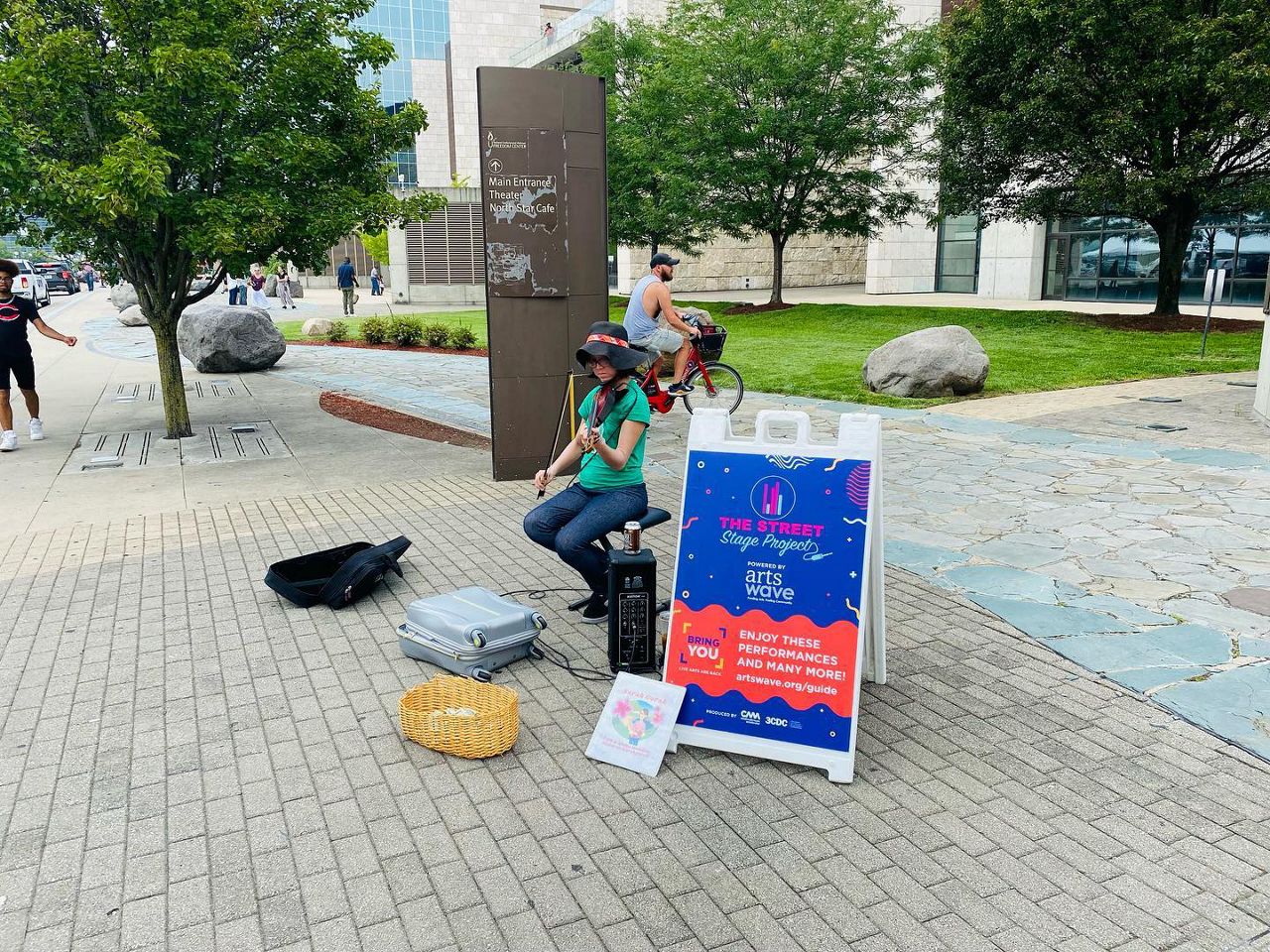 The Street Stage Project also hopes to help activate parts of downtown, many of which are still recovering from the pandemic. (Photo courtesy of Cincinnati Music Accelerator)

Another goal of the project is to activate parts of downtown and drum up sales for business. Many workers stopped coming downtown over the past few years because of the work-from-home culture created as the result of the pandemic.

With most health restrictions lifted and more people coming back to work in offices, the Street Stage Projects offers them a reason to get out and explore parts of the city they may not have experienced in months or even years, according to Jackie Bryson, vice president of the Downtown (Cincinnati) Residents Council.

Performances take place seven days a week during peak social times—11:30 a.m. to 1:30 p.m., and 5 to 7 p.m. The goal is to motivate people to grab a bite to eat at a restaurant or a drink on a bar patio while listening to music.

“ArtsWave is pleased to enliven the neighborhoods of downtown and OTR through the Street Stage Project, where you will experience first-hand that live arts are back and ready to greet and connect us all,” said Alecia Kintner, president and CEO of ArtsWave.

Bryson, a longtime downtown resident, said she’s thrilled to see the performance series return this season. She called it a “treat” to walk and listen to the wide variety of performers and music styles day and night.

Describing the pop-up shows a “welcome them back” to downtown, Bryson said she often hears from residents and out-of-town guests how much they enjoy stumbling across performances they’ve found in “random locations.”

“The streets of downtown and OTR are coming alive again with events every day, and I hope downtown visitors, employees and residents will give their full support to these musicians and events being offered,” she said.