Our editors’ picks of all the best things to do and see this week.

Michael Bublé
Velvety-smooth crooner Michael Bublé is on his summertime “Higher” tour, and the man has a date with Orlando on Wednesday. Bublé is kicking off his U.S. jaunt in the South, and there’s plenty of Florida love — shows in Orlando, Sunrise and Tampa are on the books. The multi-platinum singer — and favorite of grandparents everywhere — will be showcasing songs from his newest album, Higher. If you’re lucky, the Canadian singer might even bust out his new cover of Olivia Rodrigo’s pop hit “Drivers License.” 8 p.m., Amway Center, 400 W. Church St., amwaycenter.com, $65-$165. — Matthew Moyer

War on the Catwalk
Florida is currently having a moment of hateful stupidity regarding drag. Gov. DeSantis recently filed a complaint against a Miami establishment that hosts a drag brunch that children were allowed at, trotting out the whole “culture war” talking point that the event was an attempt to “sexualize” children. (We will now hold our breath until DeSantis serves a similar complaint to Hooters. Oops, we died.) So this has been on our minds, and the protests at “Drag Queen Story Hours” at public libraries have been on our minds. What right-wingers are breathlessly spouting about drag is wrong and disingenuous; it’s a beautiful art form that’s both a pastiche of pop-culture at its wildest and all about the ecstasy of performance as liberation. We guess all this is to say that the touring War on the Catwalk will be at the Plaza Live, with Drag Race stars including The Vivienne, Krystal Versace, Kita Mean, Kornbread, Priyanka, Kylie Sonique Love, Denali and Crystal Methyd. Make it sell out. 8 p.m., The Plaza Live, 425 N. Bumby Ave., dragfans.com, $35-$199. — MM

Anthrax, Friday at House of Blues

Anthrax, Black Label Society
If you had “Go Metal Thrashing Mad” on your summer to-do list, you’re in luck. NYC thrash godfathers Anthrax and rockers Black Label Society are bringing their U.S. co-headlining tour to Orlando this week. The tour is a belated 40th anniversary celebration for venerable metalheads Anthrax, and the band’s guitarist Scott Ian has likened the tour lineup to “the night of 1,000 crushing riffs.” Hatebreed ably serves as touring opener. It’s also worth noting that this is the only Florida date of the entire run, and it’s inches away from selling out. Who’s the man? They all are! 6 p.m., House of Blues, Disney Springs, houseofblues.com, $49.50-$92.75. — MM

photo courtesy Red Bull BC One

Red Bull BC One Cypher Southeast, Saturday at Celine

Red Bull BC One Cypher Southeast
One of the most lauded breakdancing competitions in the U.S. is going down in the City Beautiful this weekend, when the Red Bull BC One Southeast Regional pits the city’s best pop-and-lockers against each other in the hopes of advancing to the national finals. The competition will be hosted by Myverse, a local battle-rapper and MC, and the winner will be chosen by a panel of veteran dancers including Orlando’s own Naty Girl. This competition draws breakdancers from all over the Southeast to compete for a coveted spot at the upcoming National Finals in Los Angeles. The winner of the U.S. finals will then go on to represent the country at the eventual world championship in New York City. But first they have to make it out of Orlando. Limber up. 1 p.m., Celine Orlando, 22 S. Magnolia Ave., celineorlando.com, $10,& RSVP required.— Maitane Orue

The In-Between Series: Lost Noises Office
Local experimental supergroup Lost Noises Office — with members drawn from Obliterati, the Tangled Bell Ensemble and Alterity Chamber Orchestra — make their long-awaited live return in a very fitting space this week. (Surely that’s enough to mitigate the crushing pain of a Monday somewhat?) Though they’re still a new proposition live, Lost Noises Office have actually been around for a couple of years now, with initial momentum on the part of founding members Holly Tavel (keyboards, vocals) and Sarah Morrison (violin, viola) stalling due to the pandemic. The duo had previously collaborated in Obliterati. Percussionist Mario Schambon — who has worked with the likes of Damo Suzuki and Bradford Cox — was added to the group, and the final piece of the LNO puzzle fell into place when oboist Beatriz Ramirez (Alterity, Belt & Ramirez) came into the fold. Their debut show at Will’s was an outré chamber-pop scorcher, so don’t miss out. 7:30 p.m., CityArts, 39 S. Magnolia Ave., eventbrite.com, $5. — MM 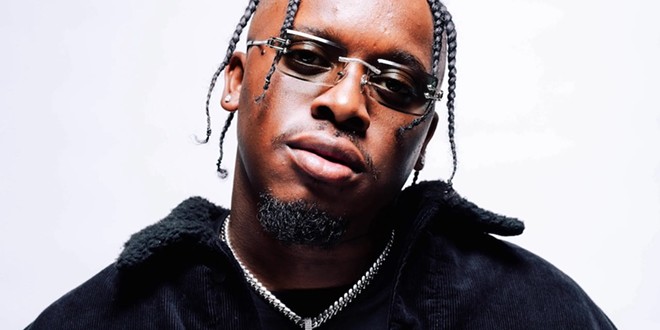 Blxst, Tuesday at the Beacham

Blxst
Just last week, Californian MC/singer Blxst got his first platinum certification for 2020 single “Chosen” (a song that boasts features from Ty Dolla $ign and Tyga). And while that’s got to feel good, Blxst is already moving forward fast, touring the U.S. behind new album Before You Go on Red Bull(!) Records. Stepping into the spotlight and out of the studio after potent production for the likes of Kendrick Lamar and YG, Blxst immediately made his mark with an R&B/hip-hop hybrid paired with personal lyrics and smooth delivery on his No Love Lost debut. This year would appear to be his for the taking: collaborating with Rick Ross, performing on the Tonight Show and taking his live show to spots as far-flung as New Zealand. Don’t miss this new talent. 6 p.m., The Beacham, 46 N. Orange Ave., foundation-presents.com, $25-$45. — MM

“The Heroic Trio,” Saturday at Enzian

“Materials and Their Impressions” by Shannon Rae Lindsey

Boundaries and Frontiers In the narratives of human history, the ocean has served as pathway, battleground, site of origin — a liminal space that is shaped and, in turn, shapes the surrounding world. Through Sept. 4. Rollins Museum of Art, 1000 Holt Ave., Winter Park, free, 407-646-2526, rollins.edu/rma.

Chris Robb: Physical Currency Local artist Robb graduated from the University of Central Florida in 1980 and immediately moved to the Lower East Side of New York. The first shows he participated in were group shows with Keith Haring, Jean-Michel Basquiat, Kenny Scharf and many others. Through Sept. 11. The Terrace Gallery, Orlando City Hall, 400 S. Orange Ave., free, 407-246-4279, orlando.gov.

Florida Byways: Jules André Smith and the Bok Fellows While exploring the surrounding byways that weave throughout Florida, Art Center founder Smith created watercolors and drawings of parts of Florida that were typically unseen by the casual tourist. Through Aug. 14. Art and History Museums – Maitland, 231 W. Packwood Ave., Maitland, $6, 407-539-2181, artandhistory.org.

The Florida Prize in Contemporary Art Artists range from emerging to mid-career, all working in Florida and all artists engaged in exploring significant ideas of art and culture in original and visually exciting ways. Through Aug. 14. Orlando Museum of Art, 2416 N. Mills Ave., $20, 407-896-4231, omart.org.

Purvis Young: The Life I See Young’s paintings reflect his observations of daily life and the fight for social justice, hope for his community, immigration and otherness, as well as the fragile balance between life and death. Through Oct. 30, Orlando Museum of Art, 2416 N. Mills Ave., $20, 407-896-4231, omart.org.