Nobody can deny that Disneyland snacks are delicious, but they can also be pricey. If you’re like me and have a big family – who are also big snackers – these sweet and savory “bang for your buck” snacks should definitely be on the menu for your next Disneyland day.

It would be impossible to talk about Disneyland snacks without including Dole Whip. The beloved pineapple soft serve is $5.99 and, according to Dole, is not only delicious but also dairy-free, gluten-free, vegan, and Kosher. 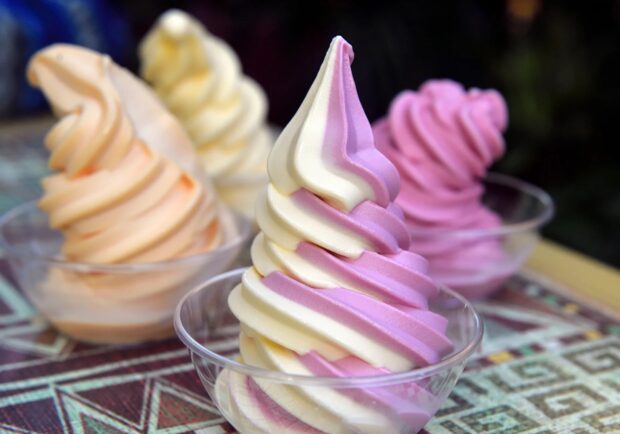 The Tiki Juice Bar at the Enchanted Tiki Room only serves pineapple (which is perfect for purists like myself), but for those who like to live on the edge, the Tropical Hideaway around the corner also offers a “swirl” option of any two Dole Whip fruit flavors for the same price.

At the “Mary Poppins”-themed Jolly Holiday Bakery Café at the castle end of Main Street U.S.A., coconut lovers can get a sweet treat that pays homage to the park’s first and most famous mountain: The Matterhorn Macaroon. 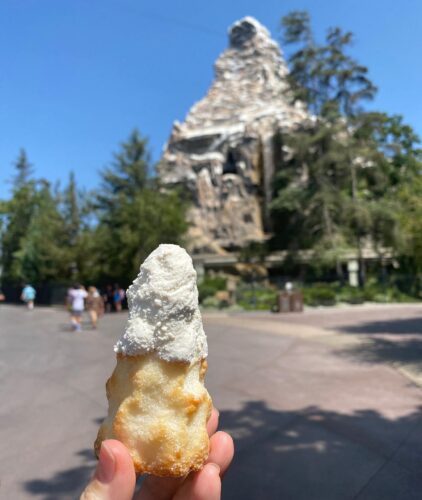 Not to be confused with the French macaron meringue sandwich cookies that appear on many theme park menus and during seasonal festivals, this is a white chocolate “snowcapped” mountain-shaped chewy coconut cookie. It’s definitely large enough to share, but at only $2.99, there’s no reason to.

Mickey Mouse foods are a Disney staple worldwide, but among the most popular mouse-shaped snacks at Disneyland are the Mickey beignets at the Mint Julep Bar in New Orleans Square. These delicious donut-like fritters are dusted in powdered sugar and are available at the bargain price of three for $5.49 or six for $8.99. 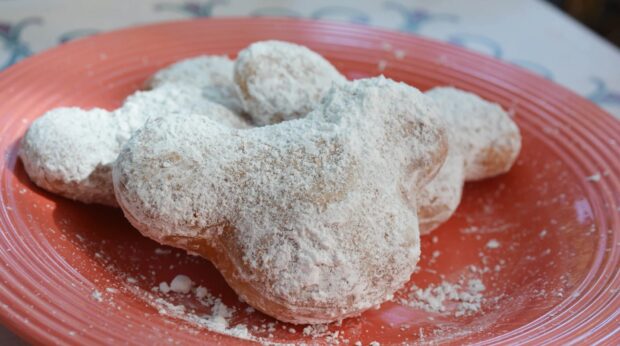 For authentic New Orleans beignets, Ralph Brennan’s Jazz Kitchen Express in Downtown Disney imports their beignet mix from Café Du Monde, the New Orleans coffee stand that’s made the iconic square doughnuts since 1862. At $9.49 for four, $10.99 for six, and $13.99 for ten, they are a bit more expensive than their in-park counterparts, but the long queue is a sure sign they’re worth it (just be sure to shake the bag vigorously to coat them thoroughly in powdered sugar). 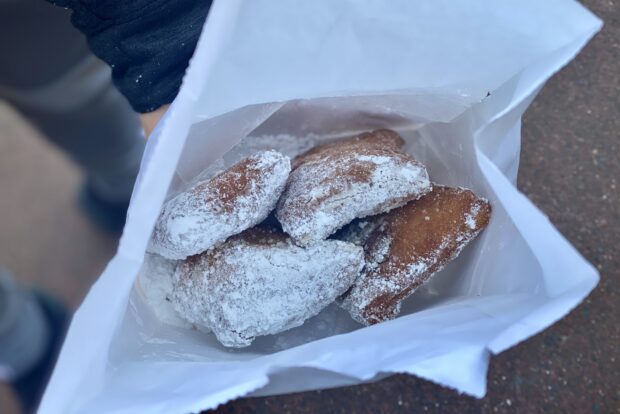 Another popular Mickey-shaped snack is the Mickey Pretzel – and I admit I’m a fan – but I’m a mustard liker, and my two sons are not, so we often end up buying more than one, which at $5.50 each ($6.50 with cheese), can add up. 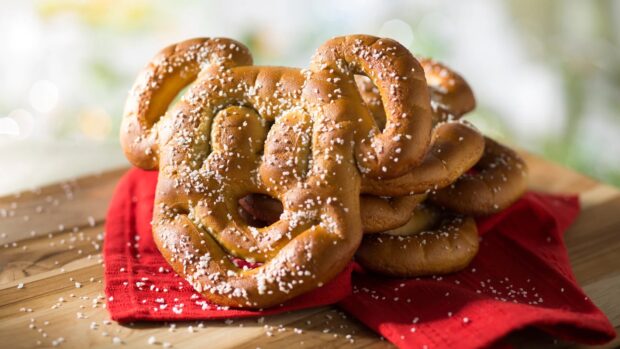 Thankfully, Pym Test Kitchen at Avengers Campus has saved the day with Experiment No. IP42. At $12.99, this 453.8-gram Quantum Pretzel with sharp cheddar cheese beer dipping sauce is not only bigger than three Mickey pretzels but also costs less. Unfortunately, the massive Quantum Pretzel only comes with one sauce container, but the good news is that extras are only 89-cents each. 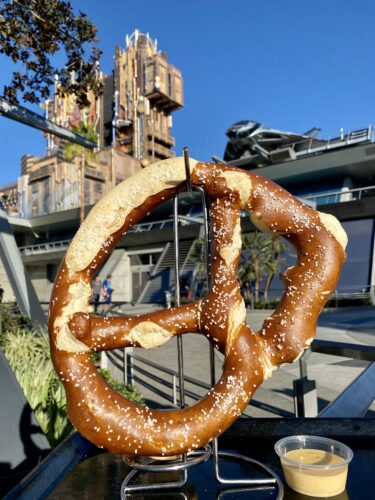 Bengal Barbecue across from the Jungle Cruise in Adventureland is a popular lunch or dinner spot, but it’s the go-to snack for my younger son, a college soccer player who frequently opts for protein over carbs. 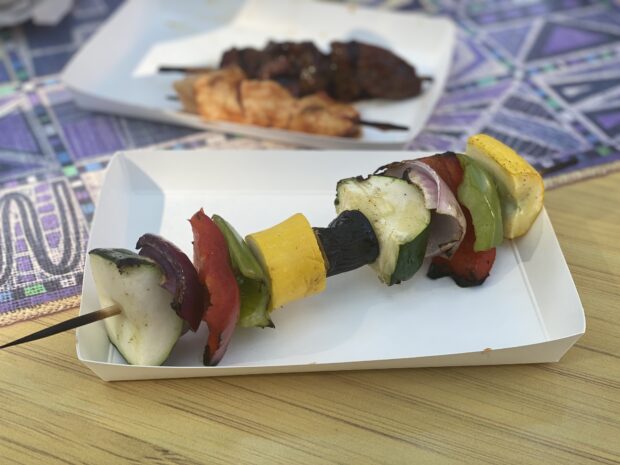 The freshly-grilled Chieftain Chicken Skewer at $5.99 and Banyan (spicy) or Bengal (not spicy) Beef Skewer at $6.49 are not the least expensive snacks in the park, but they’re certainly healthier than many others. For non-meat eaters, the $5.49 Outback Vegetable Skewer is freshly-grilled zucchini, yellow squash, bell pepper, eggplant, and onion.

“All-day snackers” will want to take advantage of a little-known option available at the Pacific Wharf Café in California Adventure – Boudin sourdough bread. Yes, everyone knows about the free samples at the Boudin Bakery Tour, but did you know you can buy an entire loaf – and even get it sliced? 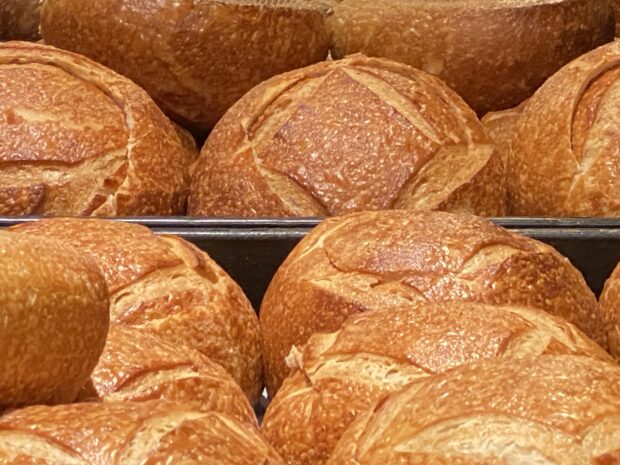 The Pacific Wharf Café sells a freshly-baked sourdough round for $5.99 (sliced or unsliced). When my sons and nephews were little they would snack all day, and I’d still have slices left to take home for school lunches; nowadays, I’m lucky if it lasts a few hours, but still totally worth it. On a recent visit, I noticed the round loaves weren’t available, so baguettes were substituted, which are also available sliced.

Pro Tip: If mobile ordering via the Disneyland app, be sure to specify sliced under “Customize Your Selection.” 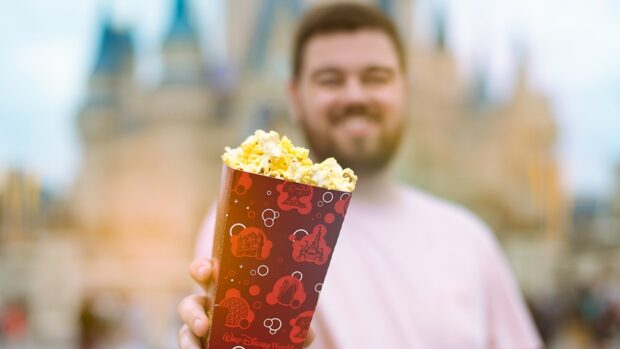 Now, let’s talk about popcorn, which we can all agree is in a category of it’s own. Disney popcorn has a cult following – and we’re not even going to discuss the character buckets – but if you’re willing to occasionally stray from the traditional $5.25 popcorn cart version, let me suggest a visit to Kat Saka’s Kettle in the Black Spire Outpost marketplace at Star Wars: Galaxy’s Edge.

The Outpost Popcorn Mix for $6.69 is a colorful combination of sweet and/or salty flavors that can change seasonally (I’ve seen both banana and chocolate and banana and strawberry), but Kat Saka also pops up other tasty combos like the current menu offering of Chocolate Popcorn with Crait Red Salt. While this snack could be a bit too “gourmet” for younger popcorn fans, it’s definitely worth trying if you’re looking for a Batuuan twist on the theme park fave. 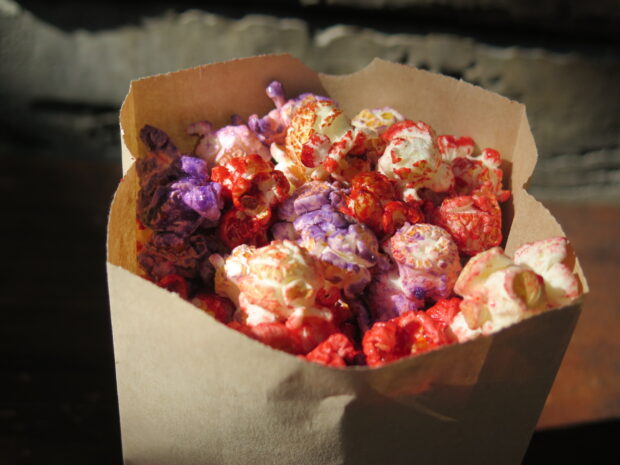 The way I figure it, snacking is an essential part of any day at Disneyland, but snacking without breaking the bank? That’s truly magical!

What are your favorite “bang for your buck” snacks at Disneyland? Let us know in the comments if we missed any must-tries!