Should cameras be allowed inside Star Wars: Galactic Starcruiser? It’s a difficult question to answer because it’s hard to compare it to any other kind of experience. It’s a first of its kind. We can try and compare it to a piece of theatre which typically doesn’t allow cameras, but it could also be compared to a theme park attraction where cameras are the norm these days. Let’s take a closer look.

In the world of traditional theatre where there is a live performance occurring on a stage in front of you, cameras are typically not allowed. If you go to a Broadway show or even a regional production, one of the last things you hear before the performance begins is an announcement stating that recording of any kind is prohibited. If you decide not to follow this rule you can be kicked out of the performance. But perhaps comparing Galactic Starcruiser to traditional theatre isn’t the best comparison.

A better comparison would be an immersive experience like “Sleep No More” or “The Nest” where you are a character living in the world of a story unfolding all around you. In both of those experiences, the rules about having your phones out are even more strict than in traditional theatre. But why aren’t cameras allowed in these scenarios and do the same situations apply to Star Wars: Galactic Starcruiser?

Part of the reason is because the content being shown is copyrighted material. Therefore, the person taking the video or photo doesn’t have the permission of the content producers or creators if they’ve established a no-camera rule. It’s very much the same reason you can’t record a movie in a movie theater. In this case, Disney hasn’t set that rule. So, apparently the owners of the material are giving permission for the full experience to be recorded in the case of Star Wars: Galactic Starcruiser. 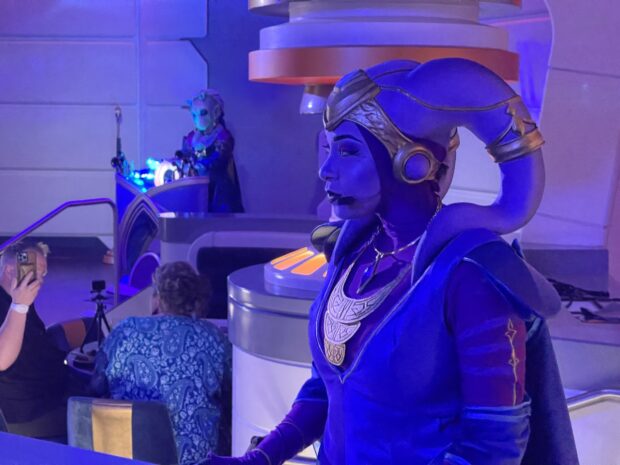 But why else isn’t recording allowed at theatrical or immersive productions? The big reason in my mind is because by experiencing something through a camera lens, you’re taking yourself out of the moment and therefore not having the intended experience. Even if you’re not the individual shooting video, seeing a mass of screens held above fellow spectator’s heads diminishes the experience for everyone nearby. The whole point of an immersive experience is to be fully immersed in the moment. We live in a world where, if proof of your experience isn’t posted on social media it didn’t really happen. Of course, that is factually untrue. It did happen. But the opposite, what feels like majority mindset, also seems to be a reality.

The fact is you can’t be fully engaged in two things at once, and you can’t be fully immersed in something if you’re not fully engaged. By taking a video or a photo in a moment, you’re taking yourself out of that moment. I know this simply sounds like “old man talk,” but the reality is that it’s true. I’m certainly not saying that I never take videos or photos of experiences or that I don’t post them on social media, but there is a time and place for everything. And its ok for some situations, no matter how grand the experience, to not allow cameras. For myself, I like to follow the rule that I don’t record or document content I’m experiencing for the first time. The exception I allow is if I’m doing it for work purposes.

From a business level, Disney and other entertainment companies partially count on social media posts from guests to help advertise their products. In the case of Star Wars: Galactic Starcruiser, it was probably a good thing that guests were able to share their experiences through video as it tended to get a better response than the professional video marketing released by Disney. But I don’t want to spend a large sum simply to market for the company I’m paying while lessening my experience. 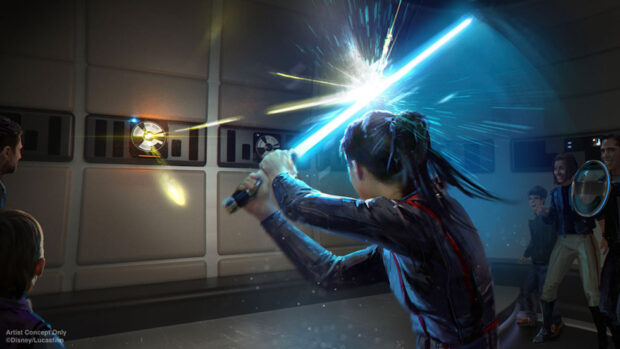 Of course, unlike a two or three-hour experience, Disney couldn’t make guests shut off their phones for multiple days. What I would do if I were the decision maker is I would only allow photos in certain locations and not allow video at all. I would also work in a system where video is being taken of guests experiencing things, like lightsaber training, and then have the footage automatically sent to the guest’s email or app. There are several benefits to a system like this. The guest would be able to live in the moment during the experience instead of shooting footage, and Disney would get to control the quality of the content being released. Think of it as an extension to Disney PhotoPass. Guests of the Halcyon are certainly paying enough and any extra perks with perceived value would make the guests even happier.

The reality is that some experiences are simply meant to be experienced in person. When a live performance or experience is conceived and directed, it is done so with the live guest in mind. There are plenty of examples of live shows being professionally shot. On Disney+ you can watch “live” productions of “Hamliton” and “Newsies.” I’m happy they exist, but there really is nothing like experiencing it in person. I love the idea of as many people having access to content as possible, but I also recognize and appreciate when something is simply meant for one format. I would consider Star Wars: Galactic Starcruiser to be something that is meant for an in-person format only.

Sometimes you’re not supposed to be able to rewind things and experience them over and over. Live entertainment has an innate fragility where it will never be seen or performed in the exact same way again. That is the excitement of live entertainment, and recording it diminishes that excitement. Knowing it will never happen in the same way again, and that it will be the only time you get to experience it, forces you to live as fully in that present moment as possible.

That sort of one-time-only experience I write about is the most exciting kind of entertainment, in my mind. I haven’t personally experienced Galactic Starcruiser myself, and I don’t see myself having the chance to experience it anytime in the near future, and that’s ok. I would rather not witness it than experience a second-rate version of it. As a creator, I would hate for anyone to experience something I created in a way it wasn’t meant to be. I would hate for someone to take my piece of live entertainment and watch it over and over until it’s dissected to the point of losing the magic. It would be like going to see the illusionist David Copperfield put on a stunning show only for him to reveal all the secrets afterward.

One thing I know for certain: every person I’ve spoken with about their Star Wars: Galactic Starcruiser experience feels the same way about one thing. Whether or not they feel the experience is worth the cost, they all agree it’s unlike anything they’ve ever done, and no video can do it justice. For me, I’d be ok with knowing little about it even if I was never able to have the full experience for myself. How do you feel about it? Would you be willing to leave your cameras behind in order to fully immerse yourself? Leave a comment and let me know.

Stay in a Haunted Mansion inspired Airbnb close to Disneyland