If you ask seven Disneyland fans where’s the best place to watch the fireworks, you’re likely to get seven different answers. That’s because “best” depends on what each person is looking for. With the “Disneyland Forever” fireworks spectacular returning today, it seemed like the perfect time to run down the list of my seven favorite viewing locations, and you can choose the one that’s “best” for you – some don’t even require a theme park ticket.

The saying “beauty is in the eye of the beholder” can also apply to picking the best place to watch Disneyland fireworks. Some people have to be able to see the castle, some really love the projections, and, let’s be honest, some are just trying to avoid the post-fireworks Main Street gridlock. But no matter which spot is the “beauty” of your eye, there’s no denying that fireworks are a magical way to end any Disneyland day.

Fun Fireworks Fact: According to Disney Legend Richard M. Sherman, Walt wanted to give guests an extra-special gift at the end of the day (he called it a “kiss goodnight”), which inspired Sherman to write the song “A Kiss Goodnight” for the finale of “Disneyland Forever” during Disneyland’s 60th-anniversary celebration in 2015.

Where to watch Fireworks at Disneyland Park

For many, the “best seat in the house” for Disneyland’s fireworks is up close and personal with Sleeping Beauty Castle – and I admit I’ve been known to stake out a spot in the hub hours in advance. Over the years, the addition of lasers, fire effects, projections, and snow (or “snoap,” as the case may be) has made the show even more spectacular from the park’s equivalent of the orchestra section. 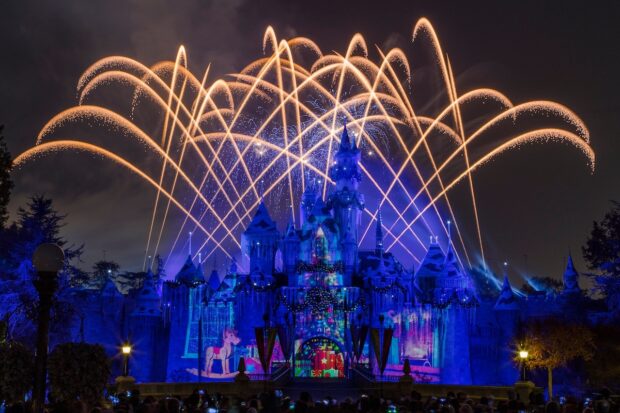 However, the prime view comes with crowds, so if standing shoulder-to-shoulder with fellow parkgoers is not your favorite, you may want to reconsider this location. Also, if you’re planning to leave the park immediately after the show, expect a slow crawl up Main Street to the exit.

With the addition of state-of-the-art projections, lighting, and lasers all the way down Main Street U.S.A., many park guests (including me) have discovered that watching the show from midway down Main Street creates a fun and energetic “street party” atmosphere. 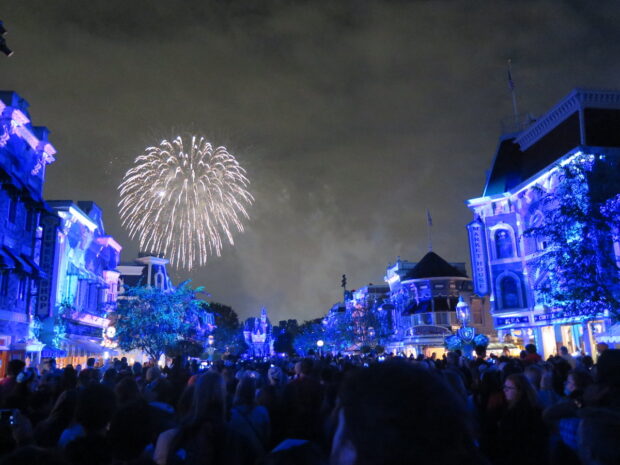 Because of that, my current favorite fireworks spot to watch is at the trolley track “Y” in front of Carnation Café, where I can be surrounded by the projections (and sometimes “pop-up” characters on the rooftops) but still see the castle. Also, standing halfway down Main Street means the exit crawl is reduced by half. Win-win. 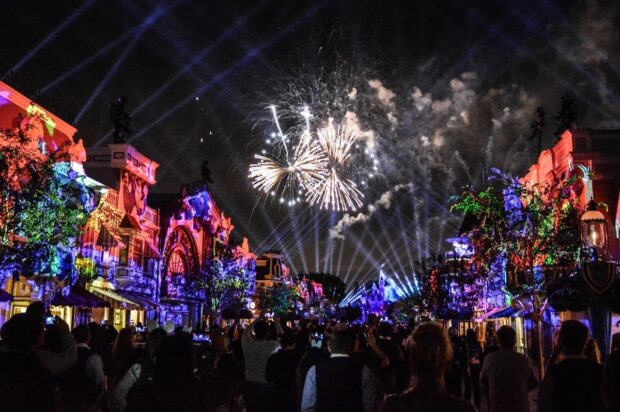 When my kids were very young, and a fast exit was the top priority, we’d watch the fireworks from Town Square (basically standing where the giant Mickey Halloween pumpkin/Christmas tree is placed). The fireworks were far away, but we could beat the crowds to the trams when the show was over. 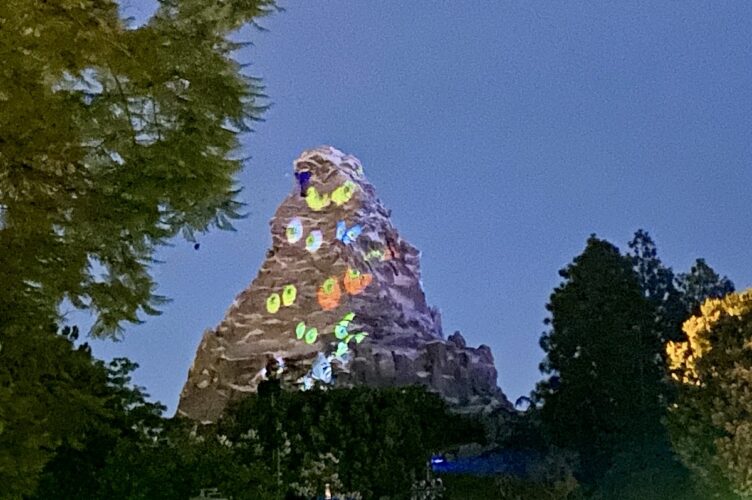 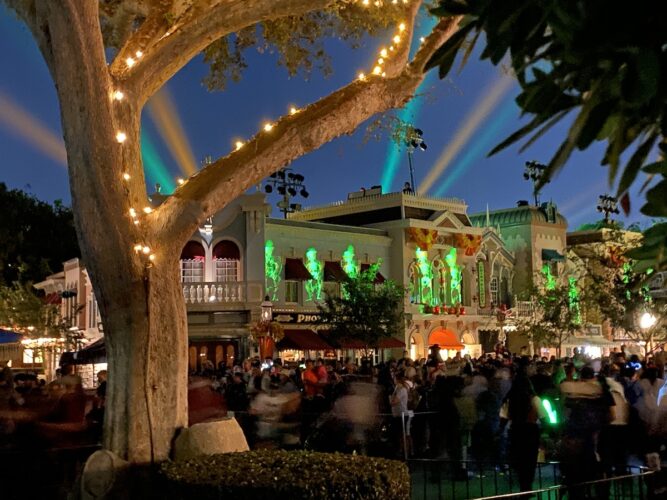 One last Main Street option I accidentally discovered during Halloween Time 2021 is to snag a table on the Jolly Holiday Café patio. The upside is avoiding the crowds (which was my goal at the time), but it was also nice to watch the show while sitting down and enjoying a treat from the bakery. The downside is that trees do obstruct the castle, but I could still see the projections on the Matterhorn and the Main Street buildings, so maybe not the best choice for first-time viewers, but something for Disneyland regulars to consider.

In recent years, I also discovered that “it’s a small world” is an excellent place to watch the fireworks – who knew? 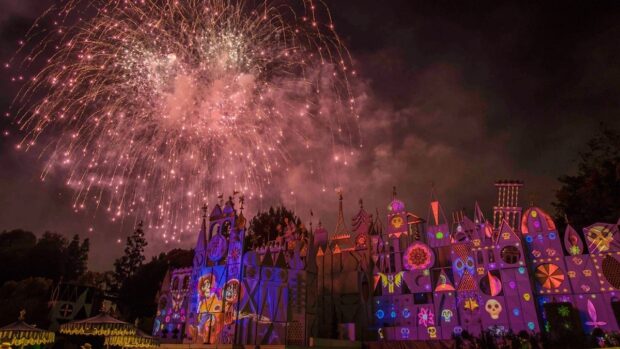 Not only are there projections on the attraction’s large façade, but the fireworks display is right above the “it’s a small world” Toy Shop – and during the holidays, the area still gets the festive “snoapfall.”

Fireworks from Galaxy’s Edge is sort of a “backside of water” situation because you’re technically behind the fireworks display. 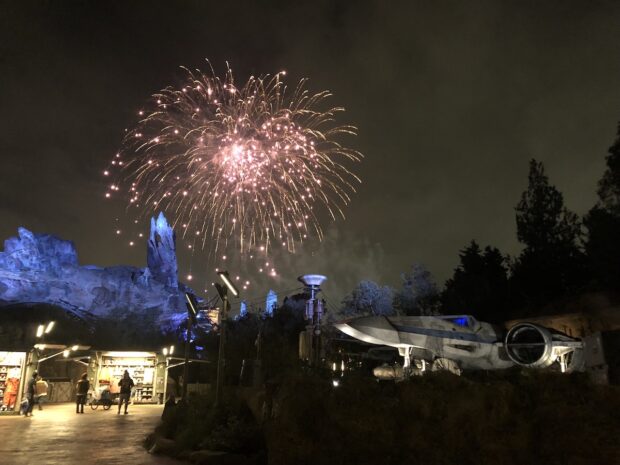 Nevertheless, seeing fireworks in the skies above Black Spire Outpost will definitely make you feel like you’re in a “Star Wars” movie – though you will miss out on the lasers, projections, music, and of course, the seasonal snoap.

No Park Ticket? No Problem!

My son played a lot of club soccer tournaments in Orange County, and because we’re a “Disneyland family,” we often headed to Downtown Disney for dinner after a game. When fireworks time rolled around, we’d hurry to the esplanade between Disneyland park and Disney California Adventure Park to catch the show.

While it’s not as magical as being inside the gates (as my son consistently reminded me), it’s still a great way to see Disneyland fireworks on a non-Disneyland day.

For Disneyland Resort hotel guests staying in Club Level rooms, the Verandah at the Grand Californian Craftsman Lounge and the E-Ticket Club in the Adventure Tower of the Disneyland Hotel both have great views of the fireworks, complete with a synchronized soundtrack and snacks. 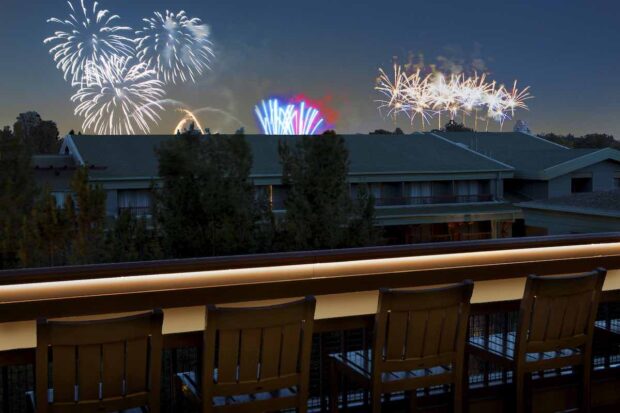 The music to the fireworks shows can also be played on all resort hotel in-room TVs, which is a definite bonus for guests who can see them from their room.

Similarly, several nearby Anaheim-area hotels have rooftop bars with great views of the parks, including the JW Marriott’s 11th-floor Parkestry Rooftop Bar and the Radisson Blu’s 12th-floor BluSky Restaurant and Bar. 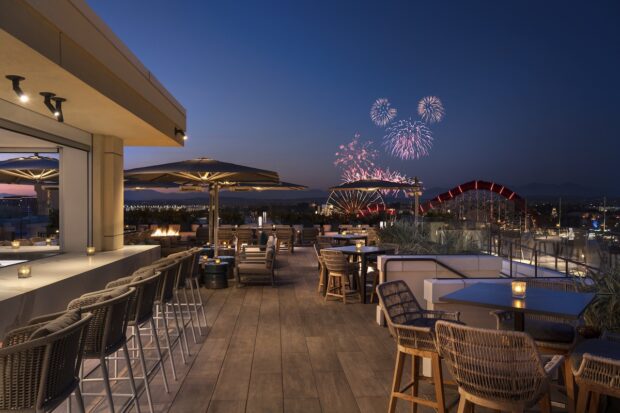 The closest to Disneyland is Rise Rooftop Lounge at the Westin Anaheim Resort, which is literally across the street from the Incredicoaster. Sadly, there’s no soundtrack at these rooftop bars – at least not yet – but these hotels also offer rooms with “fireworks views” for guests who want to watch the show in their PJs.

What’s your favorite place to watch Disneyland’s fireworks? Let us know in the comments.

And check out our video of the original “Disneyland Forever” fireworks spectacular in 2015: