IRVINE, Calif. — Like many treasures in Orange County, the new Segerstrom Shelby Event Center and Museum is tucked away in a nondescript warren of office buildings that belie one of the most esteemed car collections in American automotive history. Throw open the glass doors of the double-decker brick building, and there are more than 80 pristine Shelby cars — many of them rare, all of them spectacular.

The 83-car collection includes the only two 1968-½ GT500KR convertibles with a black ragtop, matching interior and 4-speed transmission; a 1966 GT350 factory drag car; and three Cobras with the lowest production serial numbers in history, including No. 1002, which Shelby personally autographed on the nose and driver side door.

For the uninitiated, the late, great Carroll Shelby was an auto design icon whose ideas and persona were as big as his native Texas. Best known for his work with Ford Motor Company in the 1960s, portrayed by Matt Damon in the 2019 film “Ford vs. Ferrari,” he was also a legendary race car driver who won the prestigious 24 Hours of Le Mans and whose name is synonymous with style and performance.

It was Shelby’s mystique that first drew Ted Segerstrom to his vehicles, prompting him and his wife Rae to amass what is now the fourth largest Shelby car collection in the world.

“I just liked the Mustang,” said Ted Segerstrom, whose first car was a 1966 hand-me-down from his sister. 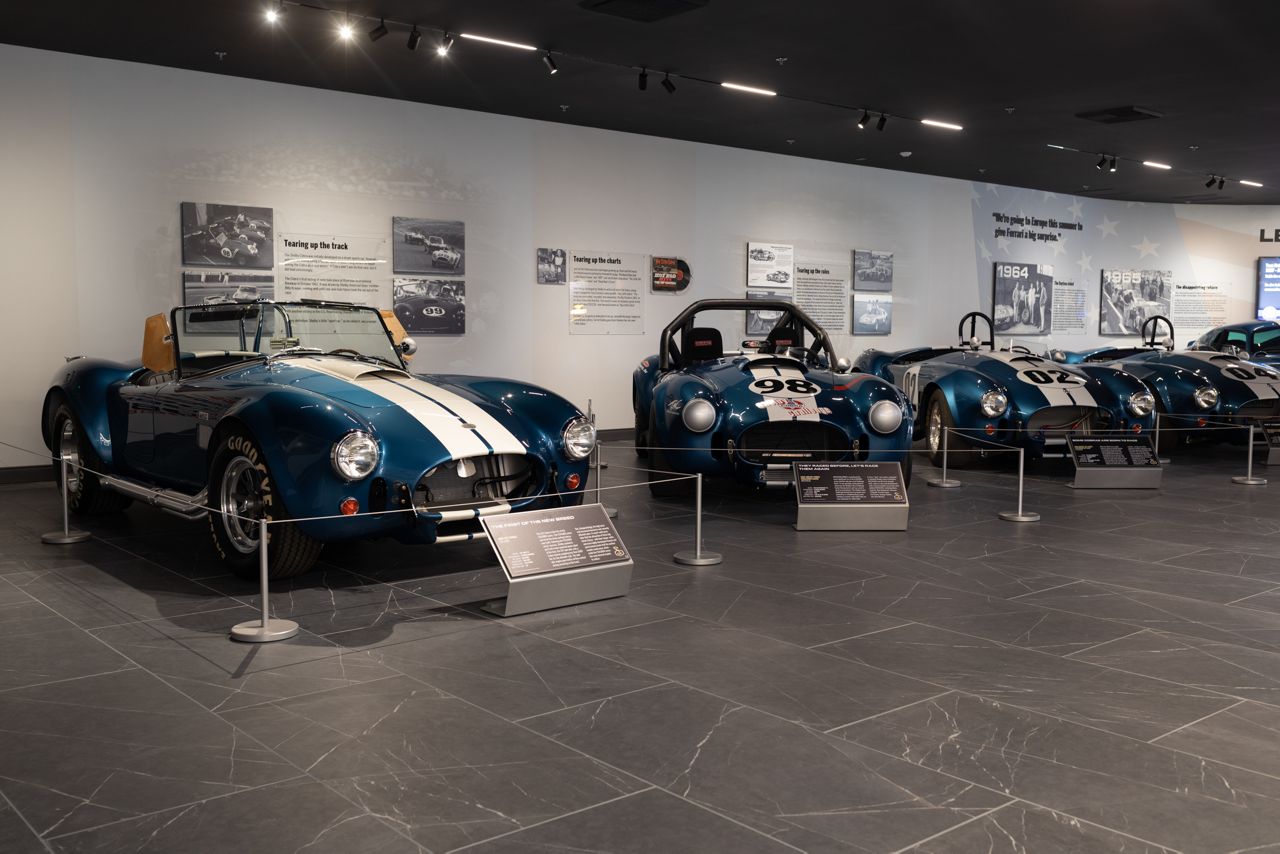 A few years later, he upgraded to a 1972 Mach 1 that he crashed on his first date with Rae in the ‘70s. Then he took advantage of the 1973 Arab Oil Embargo when people were giving up gas-guzzling sports cars to score his first Shelby Cobra — a 1967 model in green paint.

He was hooked. From there, he started seeking out Shelbys wherever he could find them – a KR 4-speed in Nevada, a Paxton Supercharged in Boston. 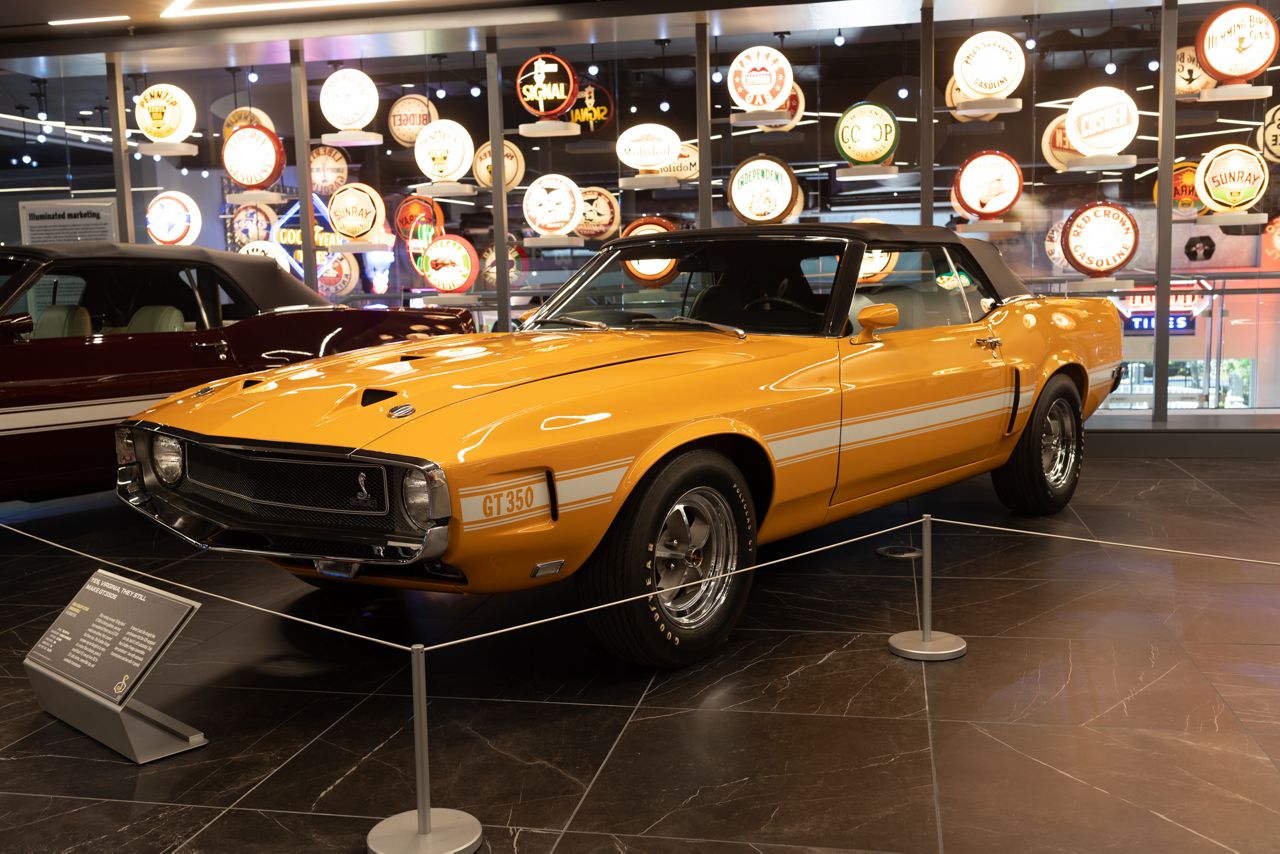 “His knowledge, his experimental mechanics led to modern-day things,” Ted said, such as the quick-change brakes in the Le Mans race depicted in “Ford vs. Ferrari.” “There’s a lot of automotive history and things to learn about Carroll,” he said, adding that how Shelby was portrayed in the movie “was tame.”

“I had a fondness for the Mustang,” Segerstrom said. “If my first car was a Camaro, maybe I would have stayed with Chevy, but the Mustang was popular. I had a lot of fun in them. They were easy to work on. And Carroll rescued the Mustang.” 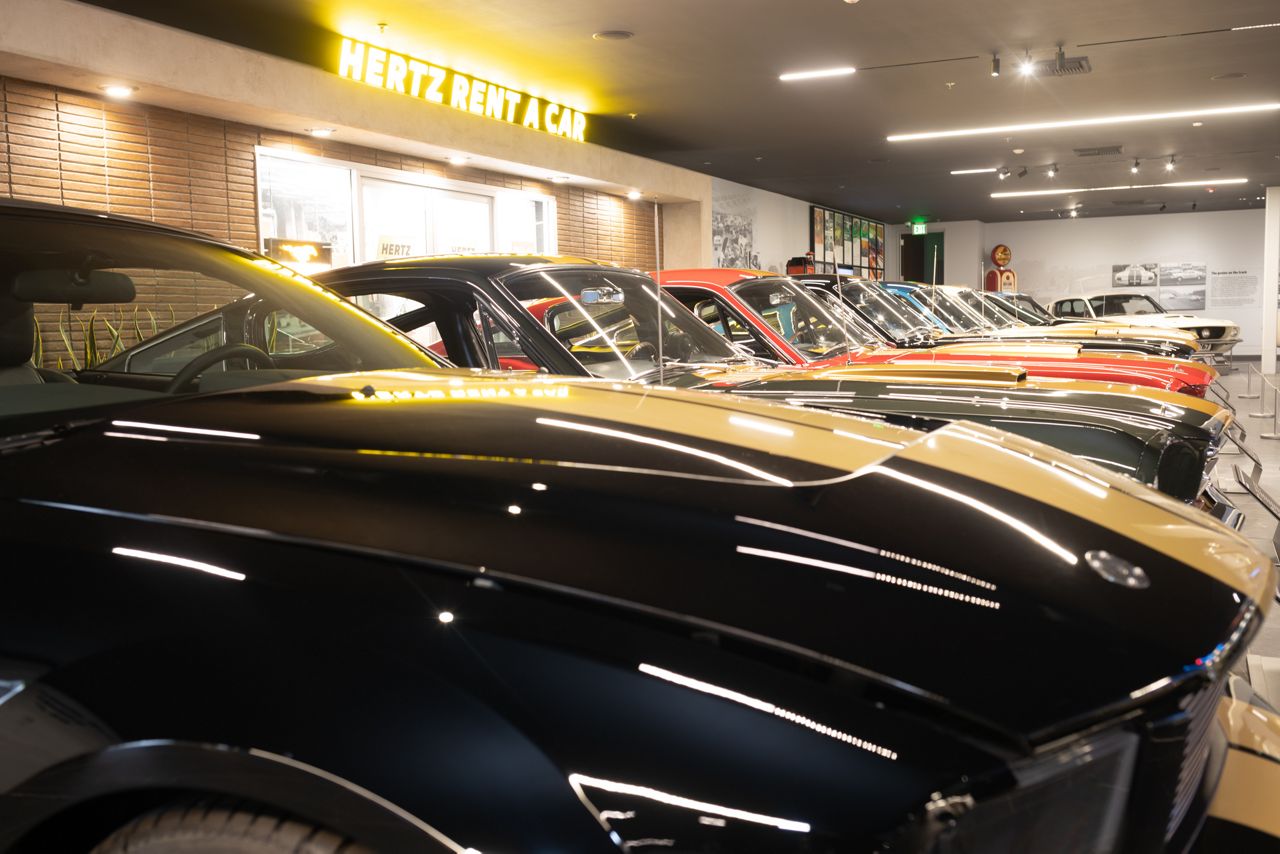 It was Shelby who suggested the Mustang be modified, the end result being the GT350. He also made 1,000 rental cars for Hertz in 1966 that became known as rent-a-racers because hot rodders would rent them to race on weekends. 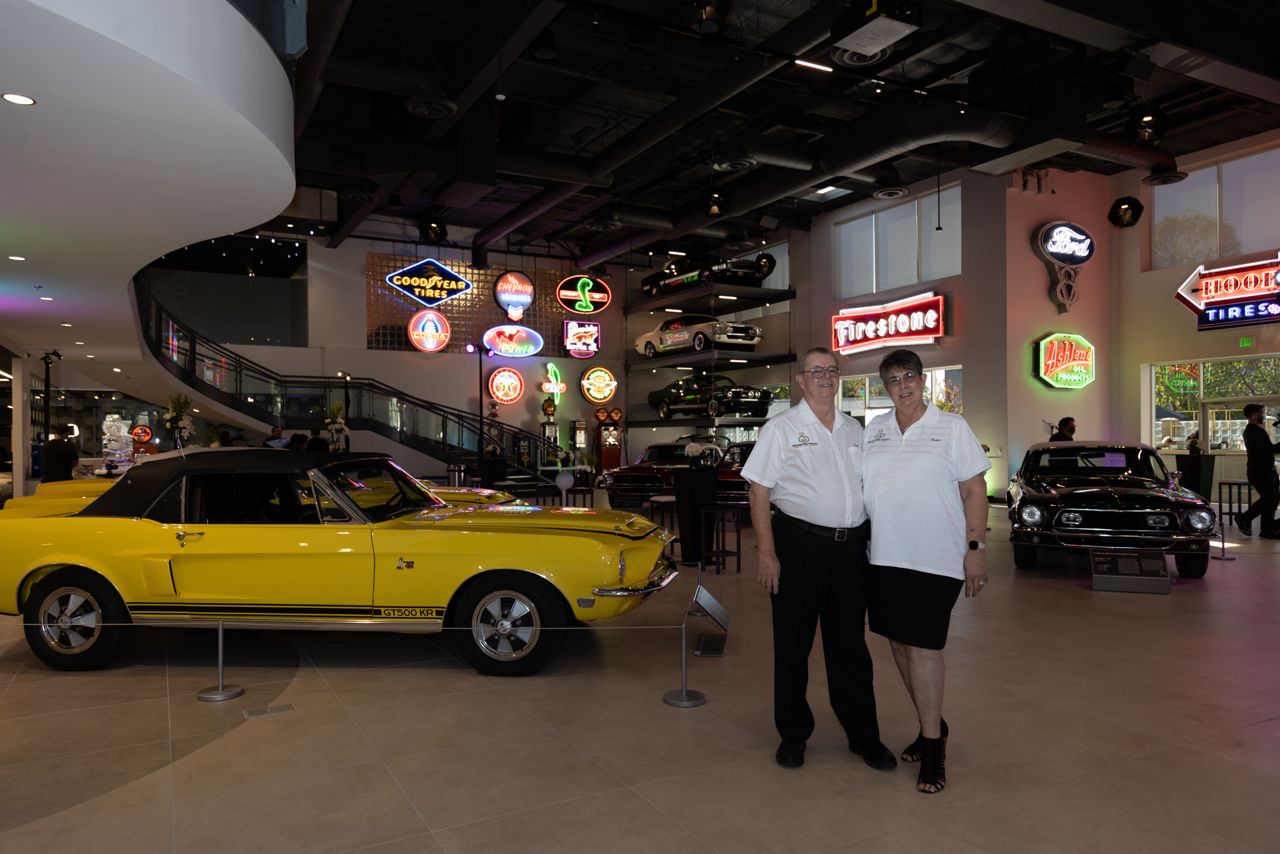 Before getting married in 2004, the Segerstroms grew up around cars in the ‘60s and ‘70s. When Rae’s dad bought her first car, he insisted she tear down the engine and put it back together. He had her check the brakes, change the oil and rotate the tires.

“He felt women especially should know about cars, so if you had to take it someplace to get it fixed, they couldn’t take advantage of you,” she said.

Ted Segerstrom grew up on the family farm in Costa Mesa around “a lot of mechanics who rebuilt their own cars so they taught me a lot about motors,” he said. 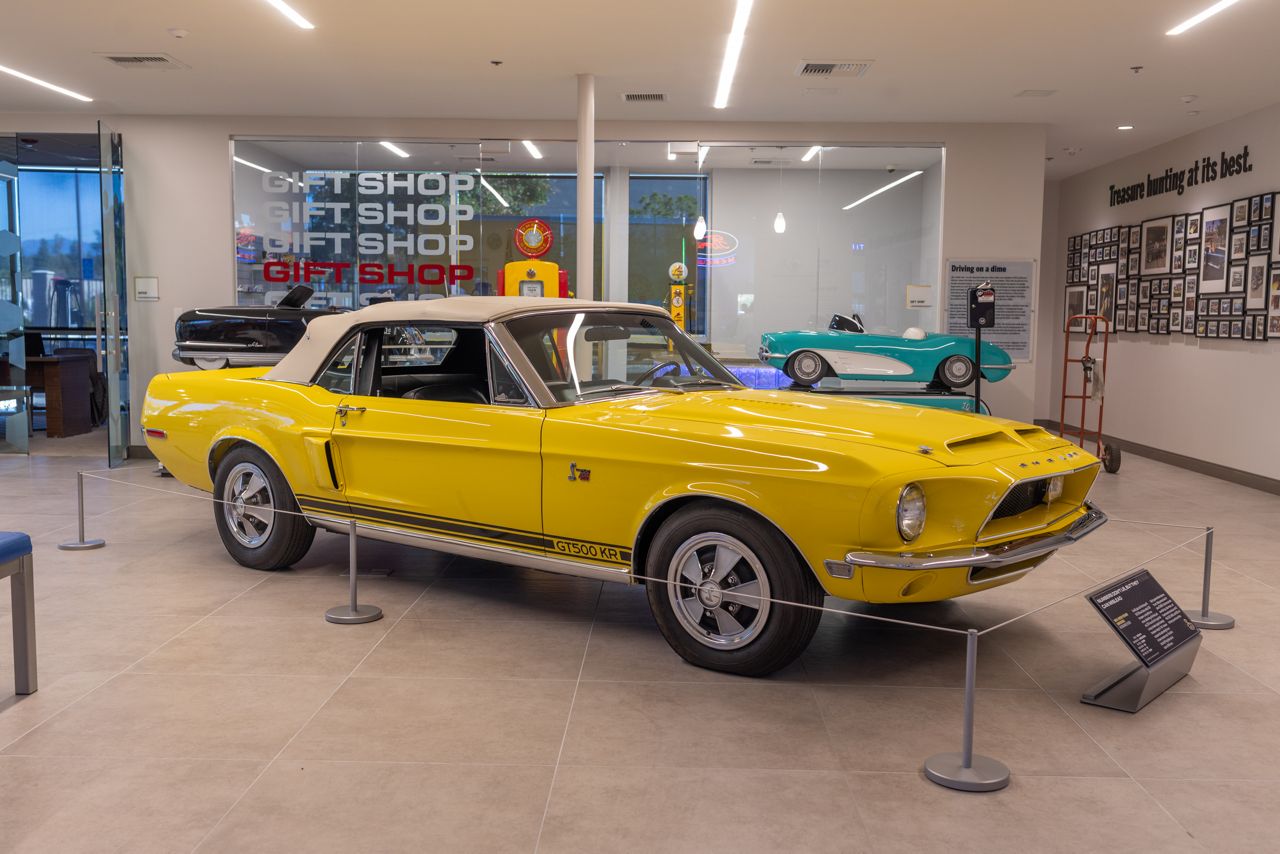 The Segerstrom family helped transform Orange County into some of the most lucrative real estate in the world after selling part of its farm to be developed into the South Coast Plaza mall. The Segerstrom name also graces Costa Mesa’s Center for the Arts.

Located one town over in Irvine, the Segerstrom Shelby Event Center and Museum is arranged by model, starting with an area the Segerstroms call ragtop royalty “because the 1968 GT500KRS convertible happens to be one of Ted’s favorite cars,” Rae Segerstrom said.

Just beyond the ragtops is a vertical, Carvana-style display of each Shelby model year, from 1966 to 1969.

And then there are the Cobras, including the very first the Segerstroms bought: the striking silver No. 1002 they bought in January 2004, which was also the first time they met Carroll Shelby in person. Shelby’s sprawling signature is inside the driver’s side door and also on the front end. The Segerstroms have since purchased Nos. 1000 and 1001 in the series. 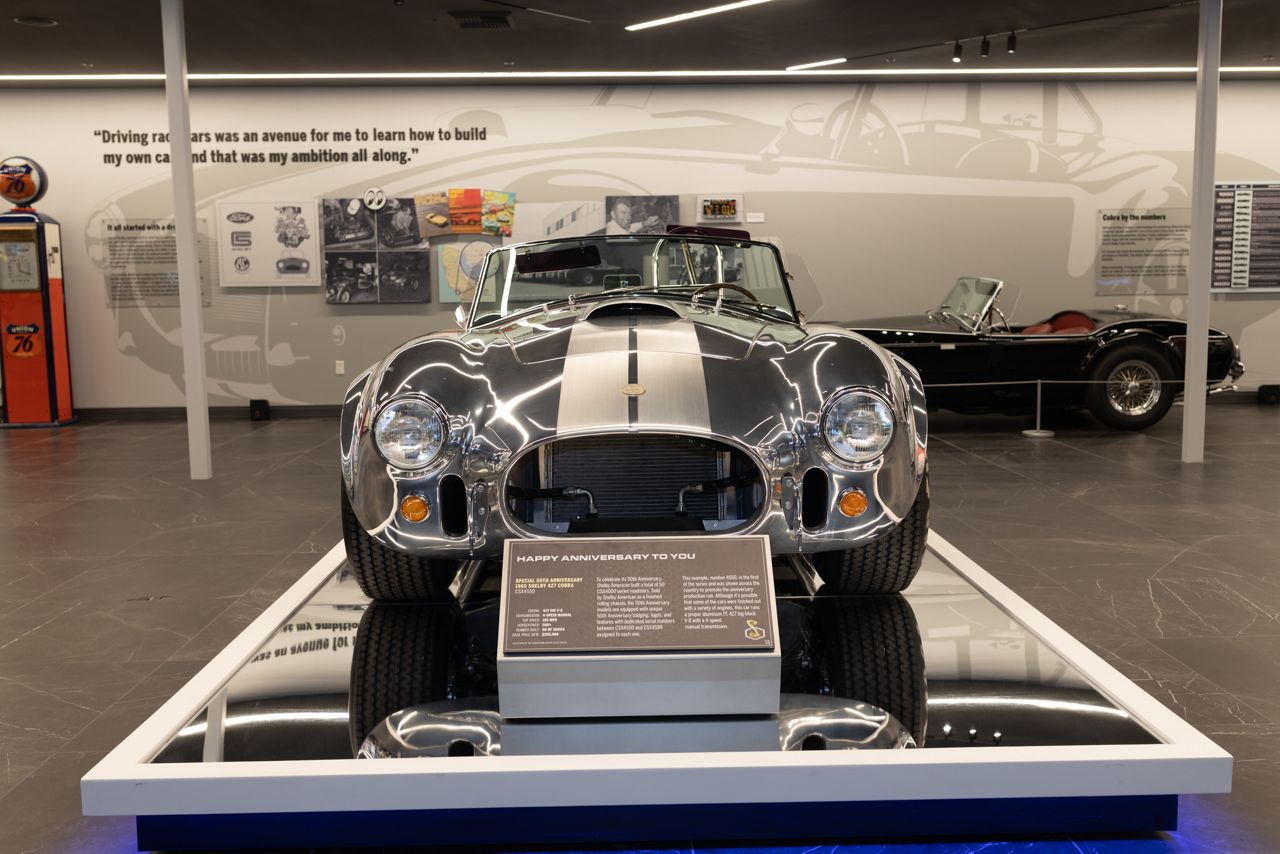 The Segerstroms won’t put a dollar figure to their collection. “People have told us it’s in the millions, but we’re not collecting them for that,” Rae Segerstrom said.

Ted and Rae Segerstrom had kept their Shelby collection in a private garage near the John Wayne Airport, but it wasn’t available to the public. And even with 25,000 square feet of space, they were running out of room.

“This started because the collection kept growing and growing,” Ted Segerstrom said of the new 32,000-square-foot building they bought in 2016 and began renovating in 2019. Architect Ulf Henriksson designed the space, adding another 10,000 square feet by converting a warehouse into the mezzanine and adding glamorous details, including a “Gone With the Wind”-style staircase.

In addition to the cars, the museum is also a treasure trove of vintage automotive ephemera, with dozens of classic neon signs promoting tire brands and vintage gas pumps.

Open to the public Thursdays through Sundays from 10 a.m. to 4 p.m., and for school tours Mondays through Thursdays, tickets cost $15 for general admission, $10 for seniors/military and $5 for children ages 6 to 12. The event center can also be rented for weddings, parties, fundraisers, private gatherings, classes, car shows and other occasions in want of a dramatic, Shelby-studded backdrop.

Well-known philanthropists, the Segerstroms are donating the profits from their Shelby Event Center to the Shriners for Children Medical Center in Pasadena, which provides medical, surgical and rehabilitative care to patients under the age of 18, and the Carroll Shelby Foundation, which also provides medical assistance to those in need.

The Shelby Event Center opened quietly on Oct. 30 and was closed over the holidays. It reopens Thursday, Jan. 6, and will hold a grand celebration Jan. 20.

Salman Rushdie on ventilator after stabbing, may lose an eye

What should the Cincinnati Zoo name its new baby hippo?