On May 14, 2022, Six Flags Over Texas opened Pirates of Speelunker Cave, a new attraction that puts guests in the middle of a pirate-themed treasure hunt foiled by original characters called Speelunkers.

The state-of-the-art boat ride replaces Yosemite Sam and the Gold River Adventure, and is a reimagination of one of the park’s first attractions – The Cave – that opened in 1964 and operated until 1991.

Fun Fact: Pirates of Speelunker Cave features 64 characters as a nod to The Cave’s opening year. 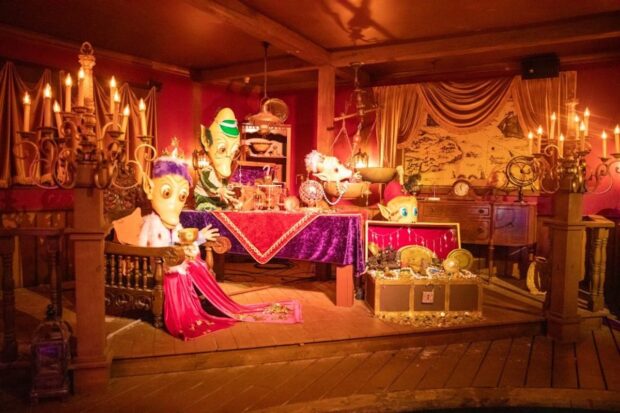 According to Six Flags Over Texas Marketing and Communications Manager Brad Malone, guests will travel in six-person boats through 17 unique scenes with cinematic projection screens, physical sets, and animatronics that all combine to tell the swashbuckling story.

“As the world’s first regional theme park, Six Flags Over Texas has built a solid reputation of providing innovative thrills and lifelong memories for generations of families,” said Park President Ron McKenzie in 2021.“What better way to celebrate our park’s 60th anniversary than [with] a brand-new attraction that pays homage to our past and launches us into the future.”