CINCINNATI – Awadagin Pratt feels his “big break” happened back in 1992 when he won the Naumburg International Piano Competition – one of the most prestigious contests of its kind in the world for young pianists. At just 26, he had become the first African American instrumentalist to win the award.

The contest helped launch the careers of some of the 20th century’s greatest pianists, such as Jorge Bolet, Abbey Simon, Kun-Woo Paik and Andre-Michel Schub.

It helped elevate Pratt’s as well.

Since then, Pratt, has gone on to play numerous recitals throughout the United States, including performances at Lincoln Center, the Kennedy Center, Dorothy Chandler Pavilion in Los Angeles, Chicago’s Orchestra Hall and the NJ Performing Arts Center.

He’s even hit the international circuit, performing in some of the most grand opera halls around the world – Germany, Italy, Switzerland, Poland, Israel, Columbia and South Africa. He’s toured Japan four times.

But none of those recitals or concerts would have happened if it weren’t for the hours of practice and endless support from his music-loving parents, and later the faculty and staff at the Peabody Institute of The Johns Hopkins University, a celebrated conservatory in Baltimore, Maryland.

Now 56, and the father of a young son, Pratt is turning much of his attention to mentoring the next generation of pianists to ensure they have the mentorship and support he had growing up.

Pratt has launched the Nina Simone Piano Competition. The biennial competition will give young Black American pianists, ages 10 to 35, a chance to shine on a major stage in front of a distinguished audience of potential mentors, fellow musicians and concert presenters.

Winners of each age group will also go home with a cash prize and performance opportunities, including acceptance into Pratt’s Art of the Piano showcase.

The competition will debut next year.

“I realized I had this really great support system growing up but many young pianists don’t have that,” said Pratt, who’s also piano professor at the University of Cincinnati College-Conservatory of Music (CCM). “We decided to step in and provide a platform for these young African American pianists to get both the exposure and mentoring they deserve.”

‘Classical’ support from the cradle and beyond

Born in Pittsburgh, Pratt is the son of Dr. T. A. E. C “Ted” Pratt and Mildred, both of whom were college professors.

Pratt said his father listened to classical music “pretty much all the time” when he was growing up, so it was inevitable he and his sister, Menah, would follow in their musical footsteps.

Menah is an accomplished pianist and violinist in her own right, although she decided to pursue a career in academia. She’s vice president of strategic affairs and vice provost of inclusion and diversity at Virginia Tech.

At the age of 6, Pratt started studying piano. Three years later, having moved to Normal, Illinois, with his family, he picked up the violin as well.

Based on his choice of career, it’s fair to say it stuck with him.

“The meaning of the music came later for me. But when I was a kid, I was always just interested in music and playing music,” Pratt said. “No kid really likes to practice per se, but for me, I also never wanted to stop playing.” 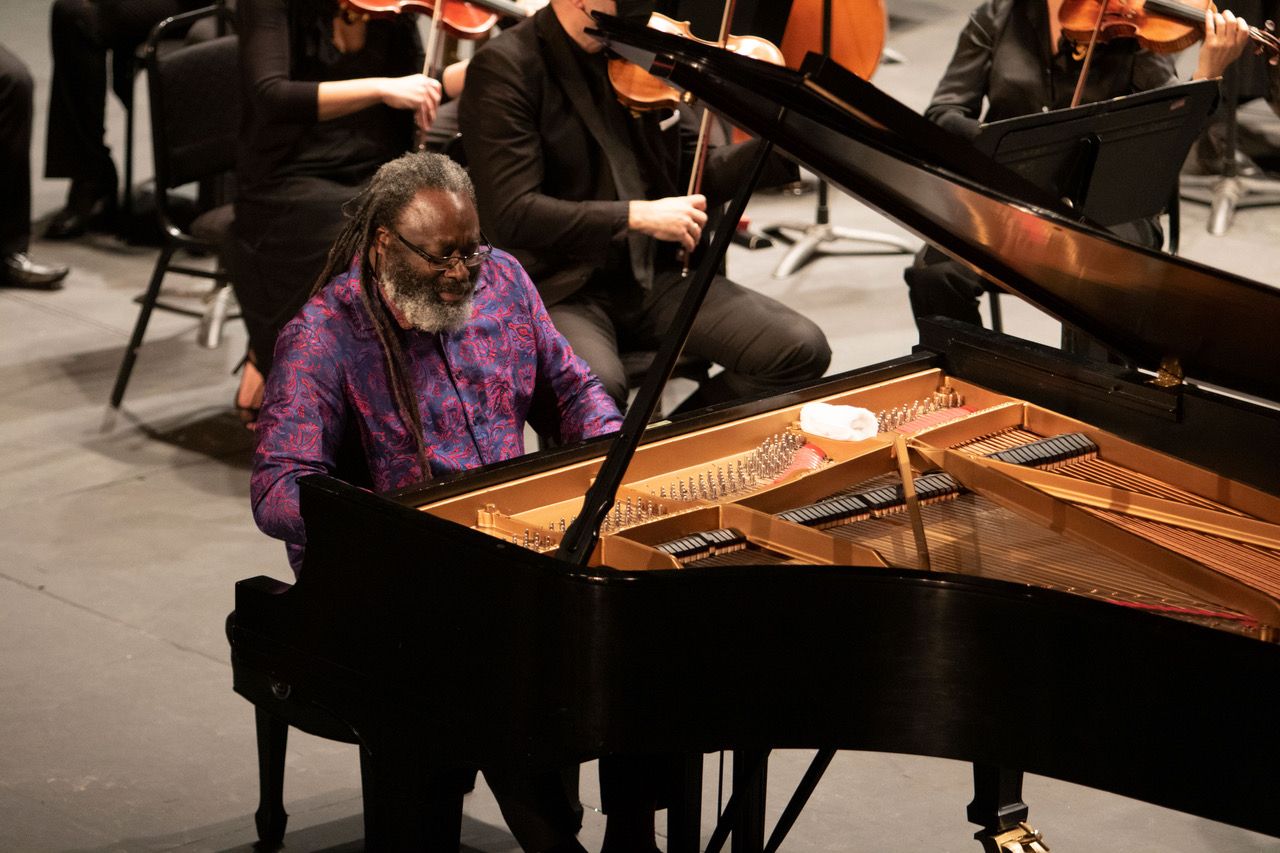 Awadagin Pratt, creator of the Nina Simone Piano Competition, has performed on some of the top stages in the country. (Provided: University of Cincinnati College-Conservatory of Music)

Pratt entered the University of Illinois at 16. He later enrolled in the famed Peabody Institute, where he became the first student in the school’s history to receive diplomas in three performance areas – piano, violin and conducting.

While Pratt was a student at Peabody, both the dean and assistant dean were Black women, which he noted was important to him and many other Black students at the school at the time.

“There was this feeling of camaraderie, that you weren’t the only one,” Pratt said. He noted it made him feel “supported and seen” by the administration. That was important to him in a couple different junctures in his education.

“I was a double major, the only double major, and needed to practice in the practice rooms more than other people. And so I got permission from the dean to have access at some point to the school 24 hours a day, as opposed to having to leave at 2 a.m. like every other student,” Pratt added.

That guidance also provided vital to him just trying to figure out what he wanted to do with life.

“What I’ve seen over the years are these really great young pianists who’ve been stifled  in their growth, in a way, by not having had either the support or the opportunity that they should have had,” he said.

Pratt feels it’s not just about learning to play the instrument or read music. It’s about developing an approach to life – whether that’s learning about a competition or opportunity or getting an introduction to someone that could change the course of their life, Pratt said.

Obviously winning the Naumburg competition was a big deal for Pratt. He said the first time I performed with the New York Philharmonic was a big deal, same with my Carnegie Hall debut,” he said.

He has performed at the White House three times. Two of those invitations came during the Clinton Administration.

In November 2009, Pratt was one of four artists selected for a classical music event hosted by the first lady Michelle Obama. The day event featured student workshops as well as a concert for guests, which included President Barack Obama.

“I view each of those occasions as such incredible honors,” he said. If you ask Pratt’s peers, especially those not in the music industry, they’re most jealous of his appearance on Sesame Street.

“Some of them think that was my defining moment. And I’m not going to take that away from anybody,” he said laughing. It’s a show he has watched with his son, Ayrton, now 8, who he is raising with his wife, Jill Meyer Pratt, in their North Avondale home.

But while his resume may be star-studded, Pratt said at this point in his career it’s not about checking boxes on professional milestones or individual accolades. It’s about continuing to “try to make a contribution.”

One of the things that keeps him going? He’s making a difference to people, both when he’s on and off the stage.

“I think it’s that feeling when it’s communicated to how you’re making a difference to people, you know? A measure of gratitude that’s shown after a performance by somebody or from a student,” Pratt said. “It helps keep things in perspective.”

In spring of 1997, Pratt, his mother and sister started the Pratt Music Foundation in honor of his father who had just passed away.

The nonprofit works to promote classical music education for young people in McLean County, Illinois, especially the cities of Bloomington and Normal. They do so through a scholarship program, which gives individual music instruction, in piano or string instruments, to talented, motivated students who have financial need.

The program is open to students in second grade through high school. This year alone they benefited 37 students.

“The purpose of the foundation isn’t to find the next Mozart or something – although some of these kids do go on to study music at a high level. It’s really about making sure those who want to study music, who want instruction, can have access to it,” Pratt said.

While teaching his students piano, Pratt also strives to give young Black artists a platform for their artistic voices to be heard.

Pratt got the idea for the Nina Simone Piano Competition while doing research about a grant program sponsored by the Sphinx Organization. It’s a social justice organization with a strong focus on classical music that aims to transform lives and communities through the power of diversity in the arts.

The idea Pratt pitched was to have a tiered contest for top-tier pianists at various age levels.

The goal is to give young artists a very visible platform to showcase their skills, gain experience and meet some influential people along the way.

In fall of 2021, Pratt was one of three recipients of $100,000 in grant funding from Sphinx. In addition to funding the competition, he plans to use some of the award money to commission new works from a diverse set of composers.

Pratt named the competition in honor of American singer, songwriter, musician Nina Simone, who was also a prominent civil rights activist. She trained to be a classical pianist at The Juilliard School in New York City.

“That’s really why we started this competition: to make sure that the higher level or older students can have a platform where people can say, ‘Oh wow, look at this really amazingly talented, gifted kid,’” he said.

For the younger kids it’s about giving the kids a chance to see “up the hill,” meaning they know what’s up next for them or what their future could be, Pratt said.

He gave the example of tennis phenom Carlos Alcaraz who grew up idolizing superstar Rafael Nadal. The 18-year-old just became the third-youngest player to crack the top 20 in the the support, surpassing Nadal in the process.

“They see that person, they’re like, ‘oh, you know, I could do this too.’ Each age group can look up and see somebody that looks like them, who is doing exactly what they’re trying to do, having been exactly where they are,” Pratt said. “They know that people just like them can go to great places if they have the talent and put in the practice to get there.”

Applications will be accepted starting this December.

“I still love to perform and I am excited to be back out on the road. But this project I think can be really special and be a great platform for some amazing young talent,” Pratt said.