A recent study revealed Mickey Mouse, Moana, and Wall-E are among the most-searched Disney character terms worldwide, earning them the title of “World’s Favorite Disney Characters.”

Images courtesy of Compare the Market

The debate among Disney fans about which character is the “best” can never be won, but to mark the 50th Anniversary of Walt Disney World, Australia-based Compare the Market took on the challenge to find the brand’s most popular characters based on global searches.

Disney lovers know “it all started with a mouse,” so it should be no surprise to anyone that the term “Mickey Mouse” landed in the top spot in the category of Mickey & Co. (aka Mickey and Pals) for 114 out of the 120 countries in the study, with the remaining countries won by the search terms “Minnie Mouse,” “Goofy,” and “Donald Duck.” 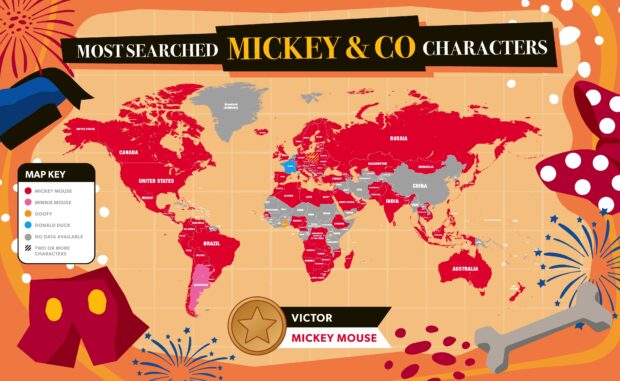 Among Pixar characters, the clear winner is “Wall-E” as the most searched term in 55 countries, followed by the term “Mike Wazowski” in 27 countries, and “Nemo” close behind in 26 countries. 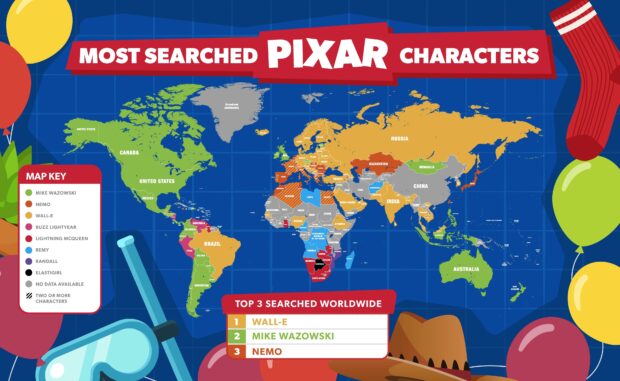 For Disney royalty, the term “Moana” came out on top in more than 50 countries, with “Cinderella” in second place by topping the list in 20 countries. However, the most surprising result was a five-way tie in Finland, with the search terms “Cinderella,” “Ariel,” “Pocahontas,” “Rapunzel,” and “Elsa” sharing that country’s top spot. 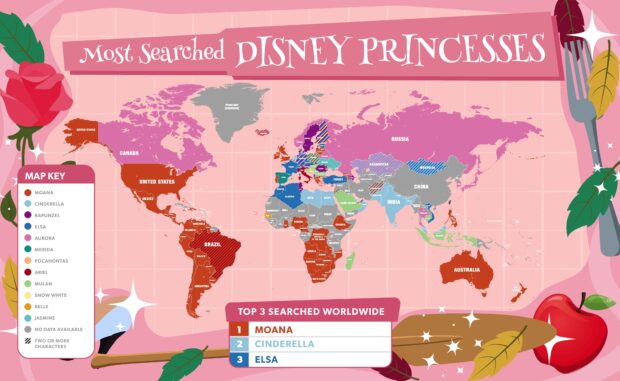 Because Disney’s princess characters have been introduced over many decades, the study also evaluated relative eras to determine whether “classic” or “modern” princesses were more popular, and results showed princesses from the 2000s/2010s (like Rapunzel and Elsa) were the most popular, winning more than three times the number of countries than those from the 90s (like Ariel and Belle). Search terms for the earliest princesses (Snow White, Cinderella, and Sleeping Beauty) landed in second place. 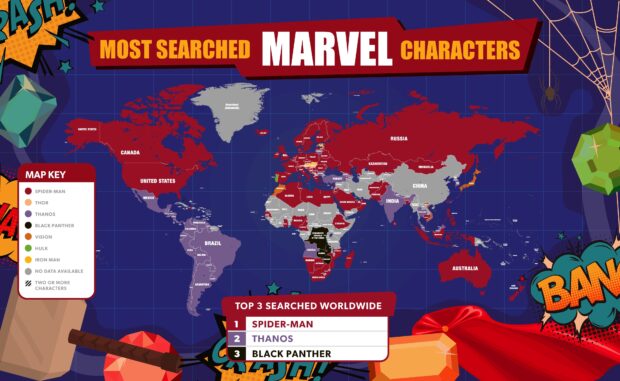 After those two, the search terms “Black Panther,” “Iron Man,” “Thor,” “Hulk,” and “Vision” garnered only a few countries each, but that could be because the MCU encompasses such a large number of franchises and characters.

Compare the Market researched the search volume for character search terms within the Star Wars Universe, and not only was “Darth Vader” the top searched term in 95 of 120 countries, but the term “Jyn Erso” came in a distant second with just eleven country wins. 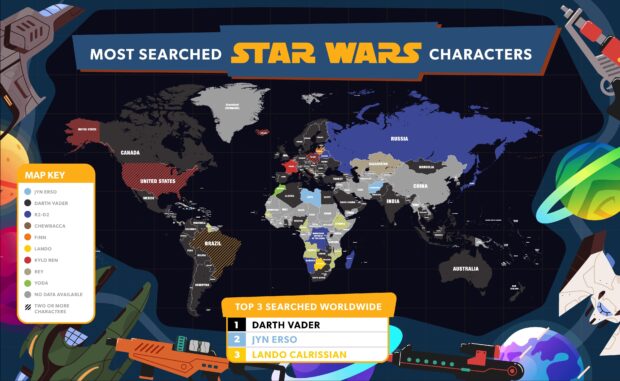 Compare the Market also divided Star Wars results into Light Side vs. Dark Side, and the Dark Side of the Force secured the overall win with 101 countries even though 24 of the 35 characters analyzed align with the Light Side. Compare the Market attributed this result to the fact that, while the terms “Darth Vader” and “Kylo Ren” were the only two Dark Side characters to win any country’s most searched title, the number of searches for the OG Star Wars villain gave the Dark Side the edge. 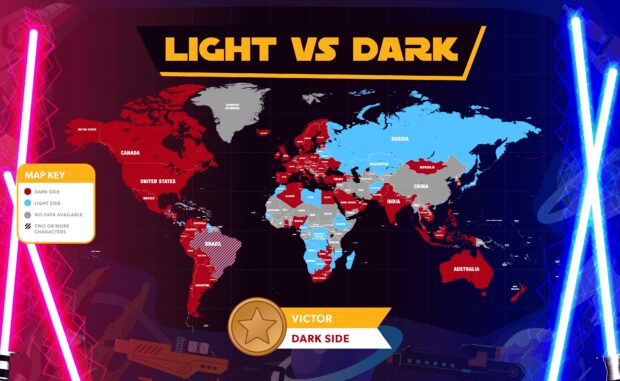 When Star Wars characters were divided according to their era – prequels, originals, and sequels (with “Rogue One” grouped with the sequels) – the results showed no prequel characters winning any countries, with the originals earning the most country wins, and Darth Vader (an original character) taking the top searched title in 117 countries.

Although the study didn’t include characters from any of the Star Wars TV series, just for fun, Compare the Market compared global searches for Star Wars film characters to those of “Baby Yoda,” who unsurprisingly catapulted into first place with 3,350,000 searches per month (as of May 2021) with more than double the search volume of “Kylo Ren” which was in second place with 1,400,000 monthly searches.

One hundred eight character search terms were taken from Disney films (the study did not include those who only appear in TV shows). When characters are known by multiple names, the most popular search term was used (“Princess Leia” instead of “Leia Organa”). For Marvel characters, only superhero names were used (“Iron Man” instead of “Tony Stark”). Search volumes were gathered for each character across all 120 countries for May 2021 and are the average of the previous 12 months.