When you board the Star Wars: Galactic Starcruiser, whose official name is the “Halcyon,” you truly enter the universe of the Star Wars movies, and your first point of total immersion is through the story’s characters.

Travelers quickly become an integral part of the story, too, through the conversations they have and the relationships they form with those characters. But be careful; not everyone is who they seem to be!

From a few whispered words in a corner, to dancing with the ship’s superstar entertainer, or explaining yourself to a Stormtrooper, the unexpected turn your cruise takes plays out through these encounters.

Characters you’ll meet on the Halcyon:

Captain Ryola Keevan – Captain Keevan is a Pantoran who has served aboard Chandrila Star Line’s star cruiser Halcyon for some time, and her experience, strength, and dedication make her a captain worthy of the role. Tough and strong-minded, she also enjoys meeting her passengers and engaging in pleasant conversation. 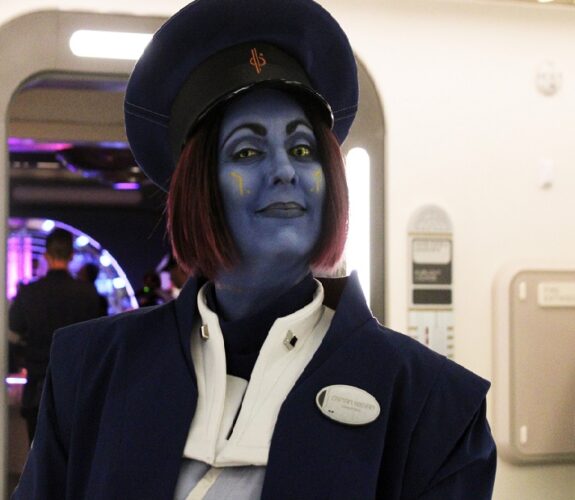 Cruise Director Lenka Mok – Lenka is everything a starcruiser could want in a cruise director. As Captain Keevan’s right-hand person, she knows everything and everyone, and while her official duties center around the ship’s onboard entertainment and ensuring every voyage is memorable, it quickly becomes obvious she is capable of so much more. 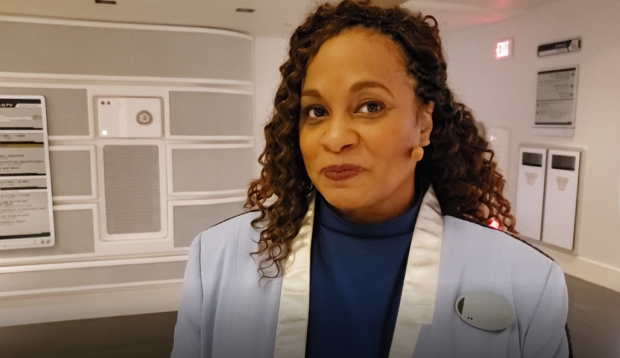 SK-620 – This adorable astromech serves as Lenka Mok’s assistant cruise director, making sure passengers’ experiences run smoothly and on time. He roams freely among the star cruiser’s guests, happy to stop for a photo or a bit of droid-style banter. But his skills run deeper, and he can be counted on to pitch in if things go horribly wrong. 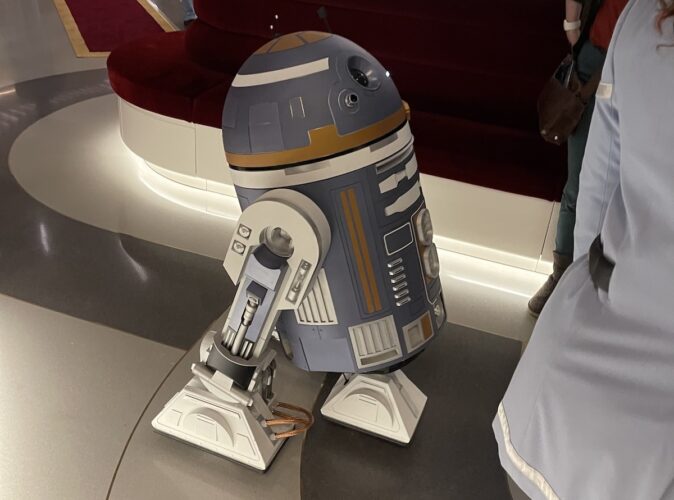 Sammie – A humble mechanic? Maybe. Sammie is a new arrival on the Halcyon, and his charm and ever-present sense of humor have endeared him to crew and passengers alike. A born mingler, he is always ready to engage in witty banter, while still, somehow, getting his job done. But this young recruit may have a deeper story to tell. 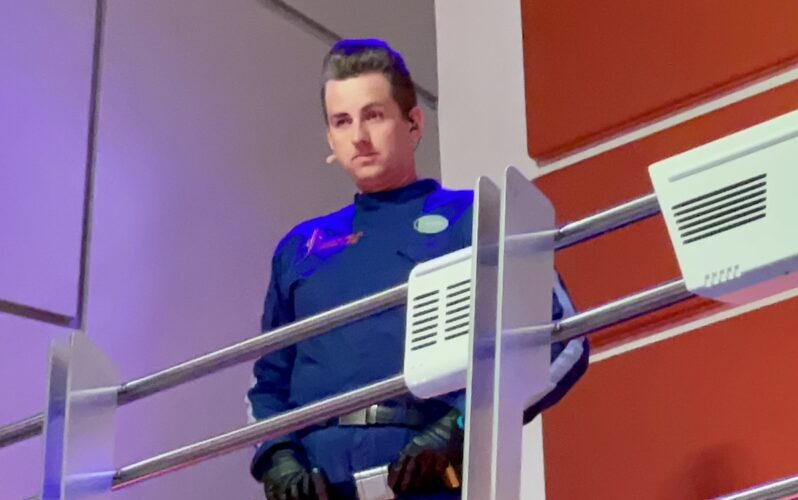 Gaya – The crew feels they are in the presence of a true galactic superstar as singer/songwriter Gaya graces the Halcyon for an exclusive evening performance in the Crown of Corellia dining room. The elegant Twi’lek’s powerful vocals truly get the room rocking. There may, however, be a less obvious reason for her time onboard. 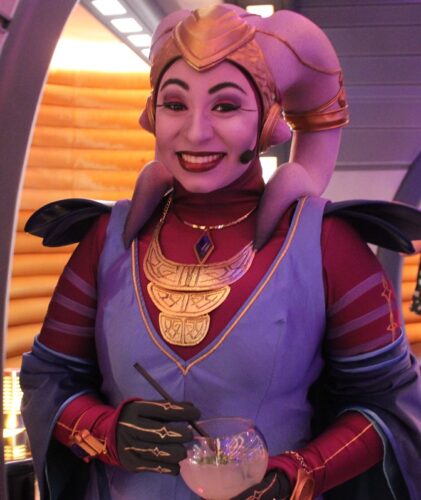 Raithe Kole – Gaya’s omnipresent manager spends a lot of time chatting with guests while also stopping at nothing to make certain his leading lady has everything she could need or want. Even unwritten contracts are set in stone, in Raithe’s mind, and he’s not above doing whatever it takes to secure Gaya’s share of the pie. 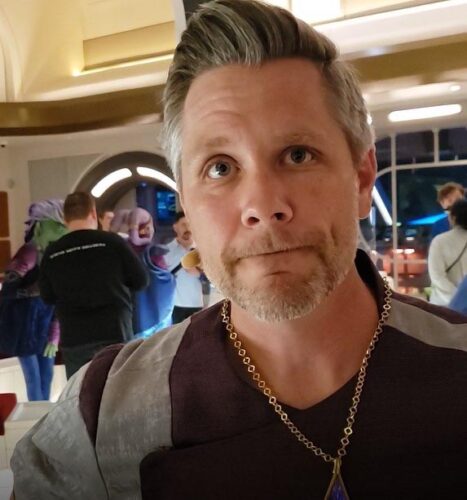 Ouannii – No one could look at the Rodian musician Ouannii and not find her absolutely adorable. Perky, friendly, and speaking a language no passenger can understand, but everyone finds fascinating, she is also a highly accomplished musician, and Gaya’s onstage helper. She is the same species as the well-known Greedo, but, interestingly enough, she speaks Huttese, the language of Jabba the Hutt. 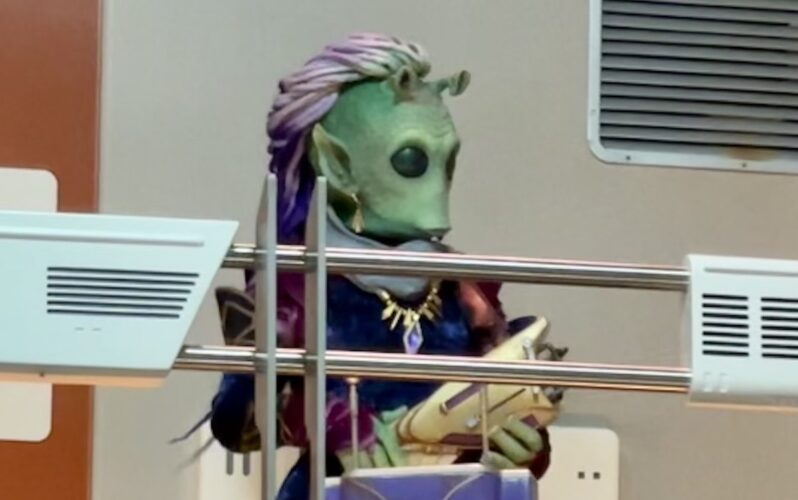 Sandro Alimander – An aspiring musician himself, Sandro is the quintessential fan boy when it comes to his idol, Gaya. The Togruta humanoid’s orange coloring makes him easy to recognize, as does his ever-present stringed instrument. Passengers will frequently find him in the atrium looking for inspiration for his next great song. 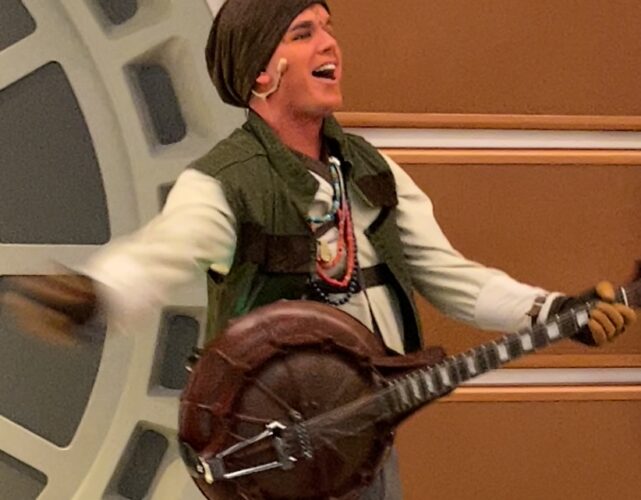 D3-09 – This talkative droid spends all of her time behind the scenes, but she’s no less important a crew member as she runs the ship’s logistics and has a vast wealth of knowledge when it comes to each passenger. Travelers on the Halcyon have direct access to her through a vidscreen in their cabin, where she is eager to hear about what they’ve seen and done, and to answer questions from her centuries of travel with the Chandrila Star Line. 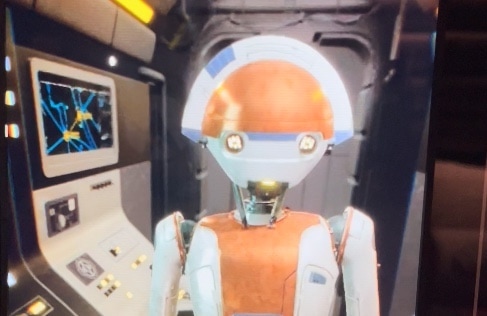 The Saja – Experts in lightsaber training and extremely sensitive to the Force, the Saja have found a refuge on the Halcyon after their ancestors – the Guardians of the Whills – scattered across the universe when the Empire destroyed the Jedi temple in Jedah. Passengers will come under their tutelage when learning the ways of the Force, and every individual’s connection to its mystical power, during sessions in the ship’s lightsaber training pods. 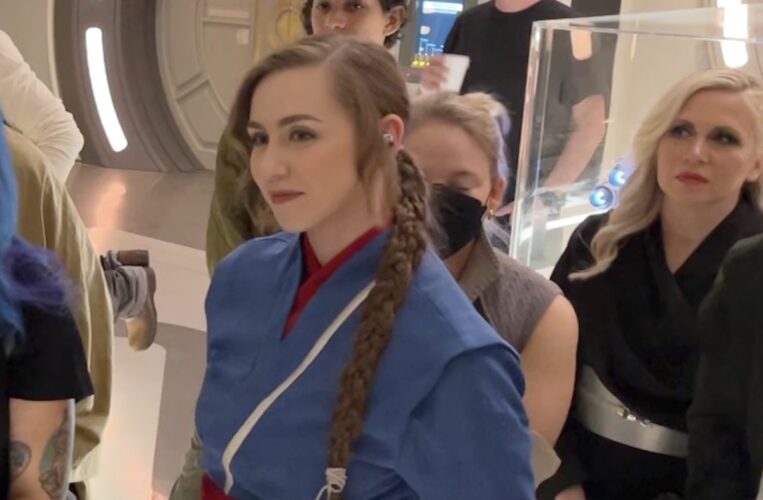 Some of the characters Galactic Starcruiser passengers may encounter are old friends – or enemies — from the Star Wars saga. 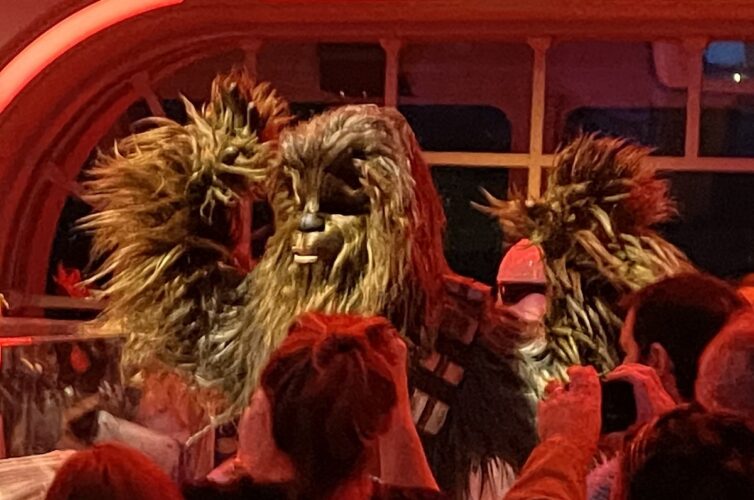 Rey – Hero of the Resistance, Rey has boarded the Halcyon to help save its passengers from the First Order, while also collecting information that will help the Resistance’s ongoing cause. 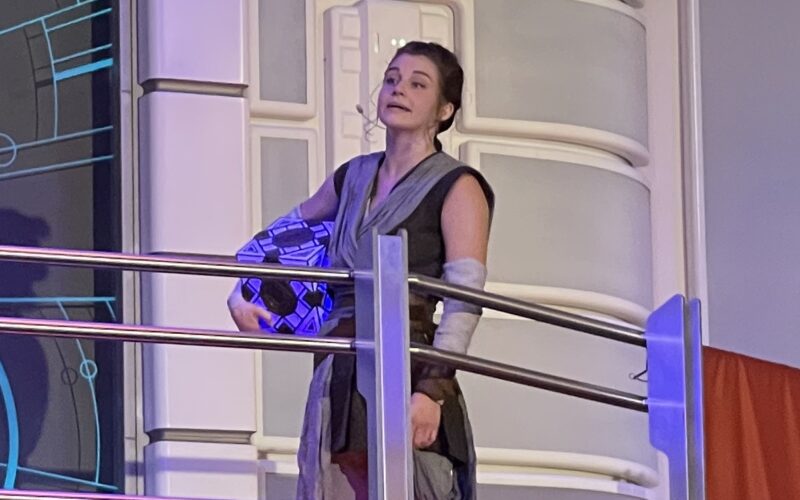 First Order Lieutenant Harman Croy – Both ambitious and hugely intimidating, Lieutenant Croy has a powerful drive to move up in the ranks of the First Order, and he has made it his special mission to expose any Resistance fighters who may be onboard the Halcyon. 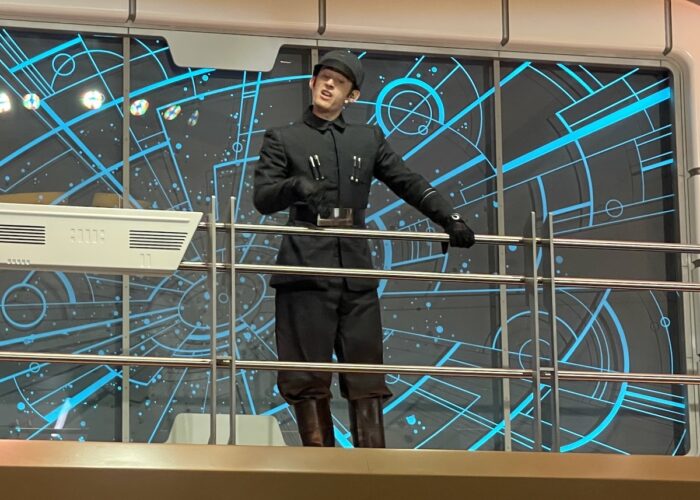 First Order Stormtroopers – These First Order infantry show up in the most unexpected places as they help Lieutenant Croy root out Resistance operatives hiding among the crew…and the passengers. 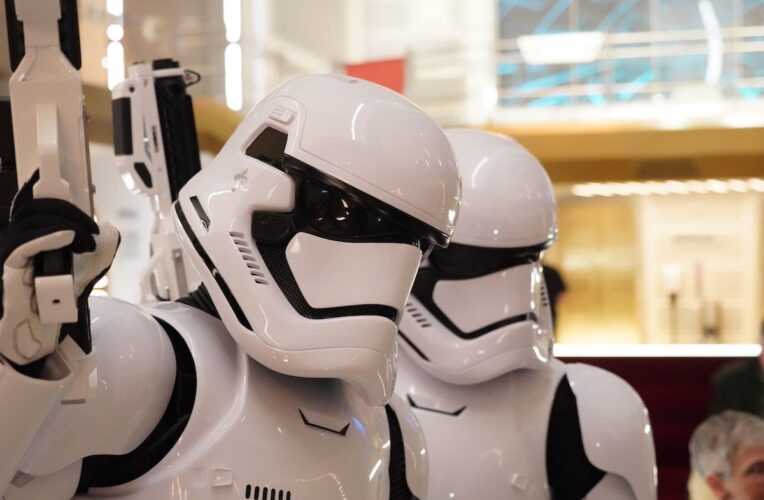 Kylo Ren – The terrifying Supreme Leader of the First Order isn’t just on a mission to destroy the Resistance wherever he finds it, he has also specifically targeted Rey. If he finds her, there is certain to be a battle of epic proportions. 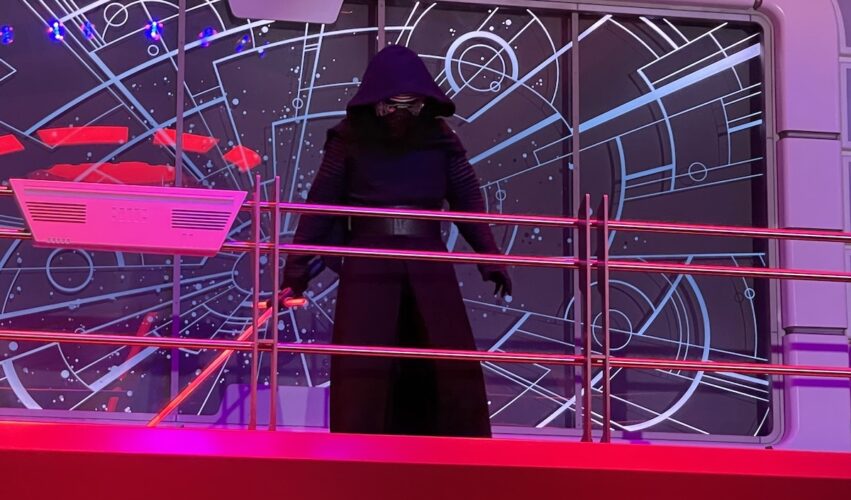 Star Wars: Galactic Starcruiser is an immersive two-day adventure, and engaging fully with the characters makes their story your story.

For more information or to make a booking, visit Disneyworld.com.