The Magic Kingdom at Walt Disney World in Orlando will officially debut the much-delayed Tron Lightcycle/Run ride in the spring of 2023.

That was one of the key announcements from the sold-out D23 Expo in Anaheim on Sunday, September 11, 2022, with Chairman of Disney Parks, Experiences, and Products Josh D’Amaro admitting it has been a frustrating wait for the park’s eye-catching new coaster.

Tron was originally scheduled to open as part of Walt Disney World’s 18-month 50th anniversary celebration, which started on October 1, 2021, but its construction was hit by the onset of the Covid-19 pandemic in 2020.

The impressive attraction, which first opened at Shanghai Disneyland in 2016, was then penciled in for 2022, but experienced more delays, as D’Amaro acknowledged on stage during the expo’s eagerly-anticipated “A Boundless Future” presentation.

“But I’m telling you it is really close to being ready for show-time, so close, in fact, I got a chance to take an early test ride, and I figured I’d give you a sneak peek. Take a look…”

D’Amaro then showed a video with clips of him on the ride, along with some of the Imagineers and other cast members who have been working on the eye-catching coaster. 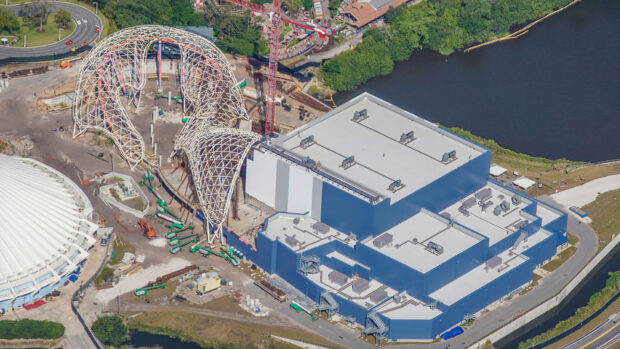 And he added: “I will admit I have a really cool job, but what you saw there was just a little taste. It was great riding with some of the team members who have been so committed to this attraction through all its unforeseen twists and turns.

“They are working on a lot of finishing touches right now and we are excited for you all to experience it, and that is why I am thrilled to announce that Tron Lightcycle/Run will debut in the spring of 2023.”

The fact it won’t open until next year will obviously be a disappointment for some, but with this latest announcement it does mean there is really something to look forward to in the spring.