Take control of your smart home devices with this new Harry Potter Magic Caster Wand! Through the power of tech, and a bit of Wizarding World magic, your home is under your command.

Powered by smart technology, the wand, when used with the free companion Harry Potter: Magic Caster Wand app, allows users to cast many of the iconic spells they know and love from the Harry Potter series. By connecting the Harry Potter: Magic Caster Wand to the companion app, motion-gesture spells including Expelliarmus, Lumos, Expecto Patronum, Wingardium Leviosa, and more interact with Bluetooth-enabled and Wi-Fi-connected smart home devices, such as compatible light bulbs, speakers, and smart TVs.

At launch, the Harry Potter: Magic Caster Wand and companion app will be available in the United States and the United Kingdom (excluding Northern Ireland) with expansion into other territories to follow. Fans will be able to learn and master more than 50 spells at launch. Each wave of the wand connects with the free companion Harry Potter: Magic Caster Wand app to generate lighting, sound, and haptic effects through connected compatible smart home devices.

The library of spells will continue to be updated, along with new compatible smart home devices, activities, and functionality. The wand usually chooses the wizard, but here, the owner has the choice. There are three different wand designs, plus a limited-edition wand design exclusively for Harry Potter Fan Club members. 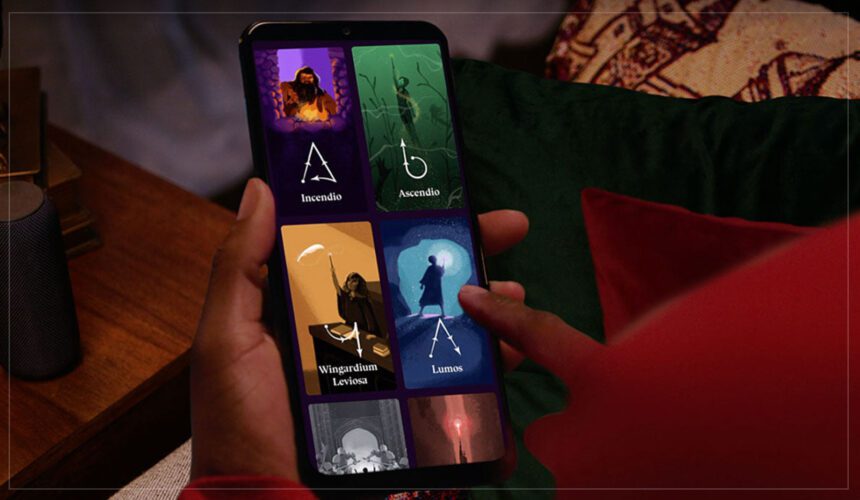 The Harry Potter: Magic Caster Wand app connects to compatible smart home and Bluetooth devices. It is completely free and serves as a spell book, provides tutorial instruction, unlocks new spells and actions, and responds to spells. It will also interact with other Magic Caster wands with connected smart phones or tablets to allow a wizard duel.

Registration for a free account is required to unlock the full functionality. Users can personalize their experience by creating a account where they can select their Hogwarts house, Patronus, and wand traits.

Witches and wizards can choose from four different wand designs. Each offer their own backstory, lighting elements, and unique crafted look.

Heroic – Crafted with elegant curves and ornate details, this wand was designed with magical innovators and inventors in mind. It exudes confidence, purpose, and trust, appealing to a brilliant mind that appreciates unusual versatility and adaptability.

Honourable – Rugged and aged in appearance, this wand was designed for those with powerful intuition and an affinity for the magic of the natural world. Its warmth will draw those with strength, courage, and conviction. For the best or worst of times, this wand feels as exemplary as the one who wields it.

Loyal – Ethereal and hypnotic, the design of this wand is truly captivating. Striated with a round orb at the end of its handle, it exudes a protective feeling. Appealing to owners who are wise beyond their years, it is a perfect match for those who value grace and artistry.

Defiant – Imposing in appearance, the design of this wand is slightly bent and features visible cracks. These attributes, rather than imperfections, embody a sense of internal strength. It is a perfect match for those who hold fast to their beliefs, regardless of how they are perceived.