Loki, God of Mischief, is teleporting straight to Madame Tussauds New York in Times Square after an official debut at New York Comic Con. To celebrate the arrival, Madame Tussauds placed the Loki figure in front of Grand Central Terminal, an iconic view immediately recognizable by Marvel fans as the site of the first major Avengers battle and one of the most historic New York City landmarks.

The Loki figure is inspired by his character from the iconic New York battle sequence featured in Marvel Studios’ “The Avengers,” making New York City the perfect home for The God of Mischief. The notorious Asgardian trickster is sporting his classic headpiece, glowing scepter, and green and gold cloak. No, this Loki doesn’t shape-shift. But, the figure is based on the likeness of English actor Tom Hiddleston.

“We’re so excited to introduce everybody’s favorite villain, Loki, into the Hall of Heroes,” said Madame Tussauds New York Marketing Executive Ben Shapiro. “The Loki figure will live around the corner, but never in the shadow, of his brother and frequent foe, Thor. We know fans of the Marvel Cinematic Universe will be beyond thrilled to encounter the mischievous Prince of Asgard at Madame Tussauds New York.” 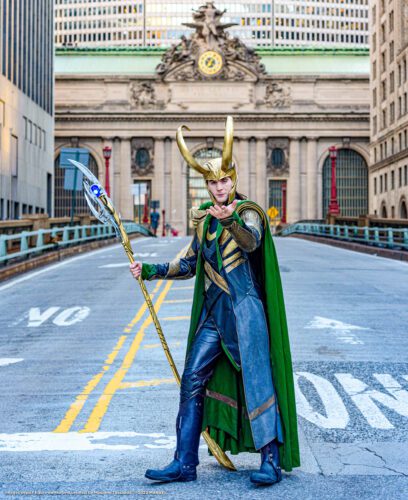 “Our teams at Marvel and Madame Tussauds have been working together for years to bring some of our most iconic characters to life, so we’re thrilled to see Loki join their lineup of Marvel Super Heroes for fans to see for themselves in New York,” said Brian Crosby, Director of Themed Entertainment Development at Marvel.

Each figure created by Madame Tussauds represents people, characters and icons who have reached the top of their field or made a significant impact on the world or within pop-culture. As one of the all time favorite arch-supervillains turned anti-hero in the Marvel Cinematic Universe, Loki is a perfect character to receive the royal wax figure treatment. He stands among other Marvel Super Heroes, including Black Panther, Spider-Man, Thor, and the legendary creator Stan Lee.