CINCINNATI — Fans of vintage arcade games will soon have a new place to become reacquainted with old friends like Donkey Kong, Ms. Pac-Man and Space Invaders.

Nearly 18 months after 16-Bit Bar+Arcade closed its doors in Over-the-Rhine, a longtime Columbus-area establishment with a similar concept is moving into its former space.

Level One Bar + Arcade is expanding and opening a second location at 1331 Walnut St. in the Mercer Commons project, according to Cincinnati Center City Development Corporation (3CDC).

The bar’s 4,595 square-foot space will feature a collection of pinball machines and vintage arcade games, along with a robust menu featuring local beers, cocktails and nonalcoholic beverages.

The bar plans to open in early December. Terms of the lease weren’t available.

“We’re elated Level One has decided to break into the Cincinnati market; we think it’s a great concept for the space and will add new life to this block of Walnut Street,” Lindzie Gunnels, a senior commercial leasing officer with 3CDC, said in a statement.

Owner Paul Burkhart opened the original Level One in Columbus in 2015 after a lifelong obsession with pinball machines, retro-style video games and arcade culture.

At the peak of his personal collection, Burkhart owned more than 60 pinball machines and 20 arcade games. He used about half of those to jump-start Level One’s Columbus location.

“About 25 years ago, I bought my first pinball machine. Then another, and another,” he said. “We had a house built around a walk-out basement where I could bring in machines.”

Beyond video games, Level One-Cincinnati will have a beverage program focused on both state and local beers. Initial plans call for at least two-dozens taps.

Level One won’t have a kitchen or offer food, but guests can bring in food purchased elsewhere, per 3CDC. Burkhart also plans to use a digital system designed to streamline the ordering process from nearby eateries. There’s a similar system in place in Columbus.

While many aspects of Level One Columbus will carry over to the new Cincinnati space, there are a few differences. Perhaps the biggest is the location itself.

The original Level One is in the Crosswoods neighborhood of Columbus, a more suburban area than the site in OTR, he said.

There’s “no specific demographic for arcade-lovers,” Burkhart said. He noted that Cincinnati‘s urban core was the best fit for ensuring the bar/arcade was available to “all walks of life.”

Kelly Adamson, executive director of the Over-the-Rhine Chamber of Commerce, believes the opening of Level One is good for the neighborhood in various ways. 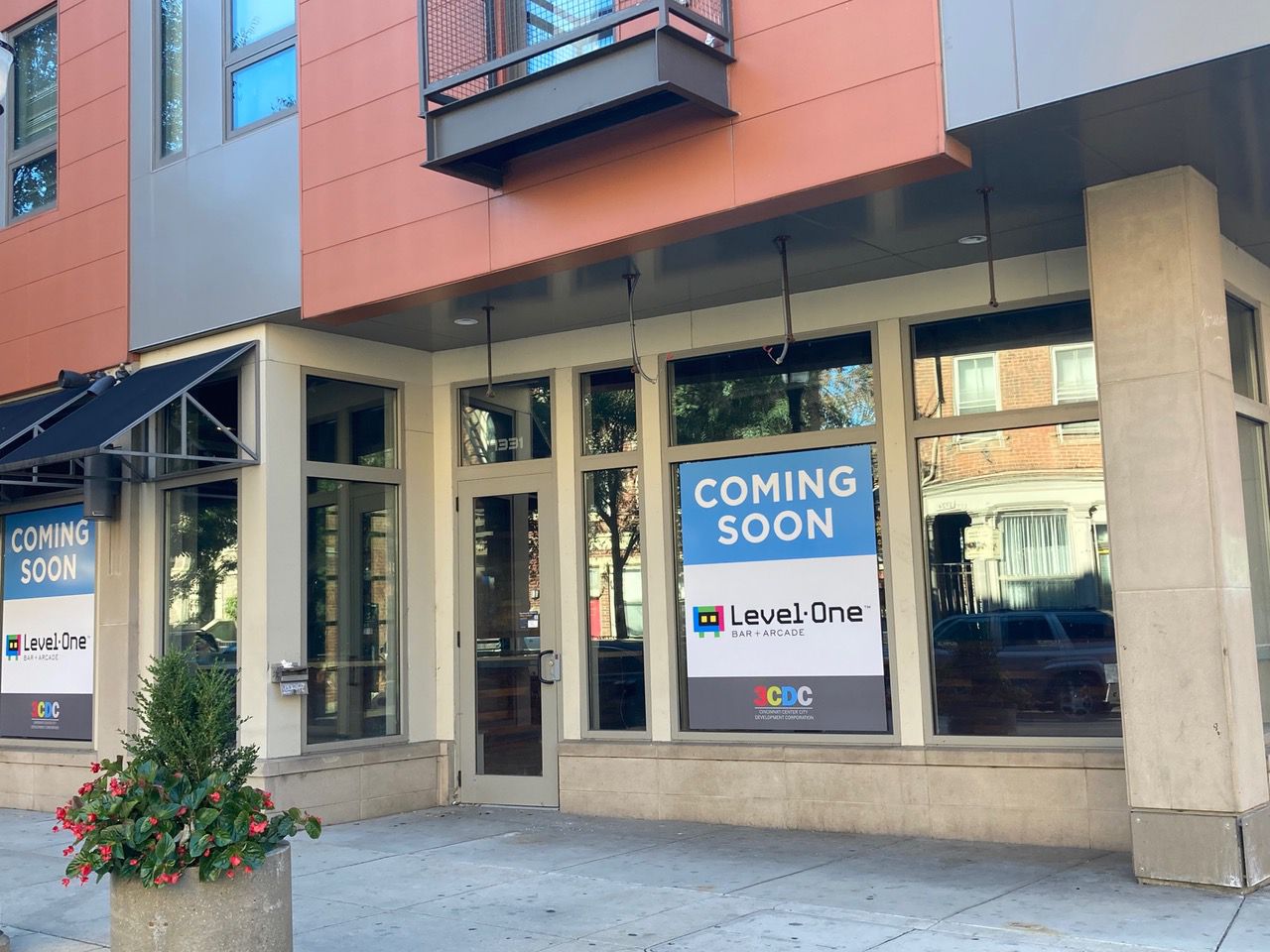 The future site of Level One Bar + Arcade in Cincinnati’s Over-the-Rhine neighborhood. (Photo courtesy of 3CDC)

Overall, small business growth is increasing, Adamson said. She noted OTR has seen a 14% year-over-year growth in small businesses since 2019.

At the time, the 16-Bit team wrote on its social media after six years at its Walnut Street location, “the time has come to bring the family together under one rooftop patio.” The two bars have shared a space since April 2021.

Level One’s new Walnut Street location is in a still-developing part of the neighborhood. It’s sandwiched between the primarily entertainment districts of Main and Vine streets. Currently, the area is home to a few scattered bars and restaurants.

Opened in 2016, Mercer Commons is a mixed-use development between the 1200 and 1400 blocks of Vine and Walnut streets. Its current commercial tenants include Unity Visual Solutions, Rhinevest, Community Barbershop, ERA Realty and Oasis Face Bar.

The Mercer Commons development includes 23 condominiums, five townhomes, a 340-space parking garage and 14,500 square feet of commercial space. There are also 67 mixed-income apartments, 30 of which are affordable units.

“I’m thrilled Level One is coming to Over-the-Rhine,” Adamson said. “I’m always happy to hear of a new business opening in the neighborhood, but I’m especially excited for this one because it’s an area that needs some activation and vitality.”

One aspect Adamson especially likes is Level One’s potential to be an entertainment option for families and young people.

The 3CDC spokesperson noted Level One will welcome children, but the management team is still finalizing details.

At its existing Columbus location, Level One is all-ages Monday through Friday, from 4 until 7 p.m. They have the same policy in place from noon to 6 p.m. on Saturday and Sunday.

“Frankly, we need more of those types of options in the area,” she said. “We want Over-the-Rhine to be a neighborhood or for everyone. It’s incredibly important to have a business where kids in the neighborhood can hop over to and have some positive play and social interaction.”

Burkhart plans to provide updates about its opening in Cincinnati on the Level One website.