Sometimes, in a grand and glorious moment, breakfast and dessert collide. When such a culinary miracle happens, it’s a cause for a happy dance all the way around. Friends, today we will make such a snack. It could be dessert, or, of course, a snack, but it could also be breakfast. And on a fall weekend morning, this is just the breakfast we need. 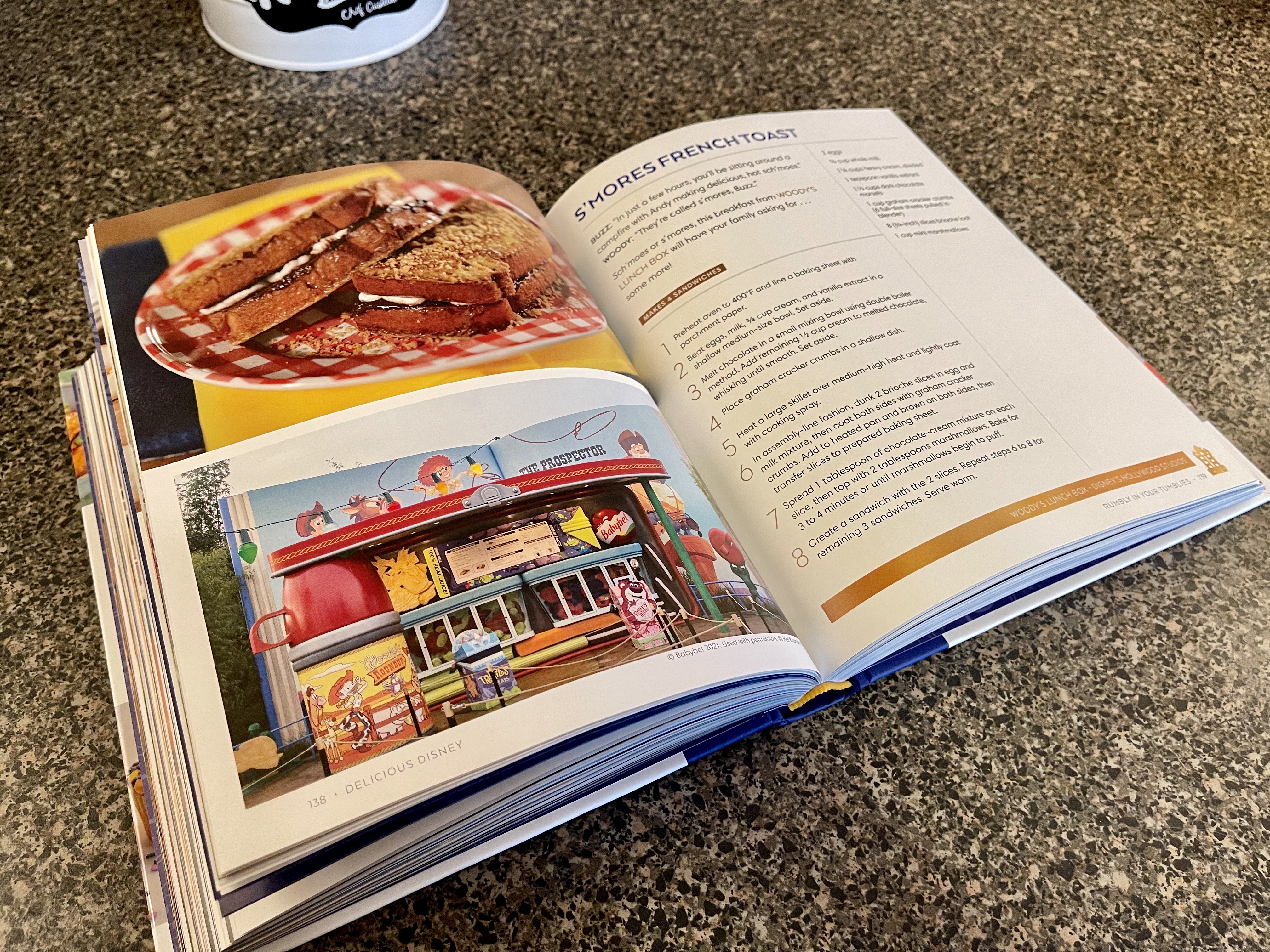 Today’s Saturday Snacks recipe is for the S’mores French Toast that was originally found at Woody’s Lunch Box in Toy Story Land. Since the reopening of the park last year, the S’mores French Toast has given way to two breakfast bowls on the quick service location’s menu, but we can find the recipe for the breakfast treat in the new Delicious Disney Walt Disney World Recipes & Stories from the Most Magical Place on Earth cookbook. 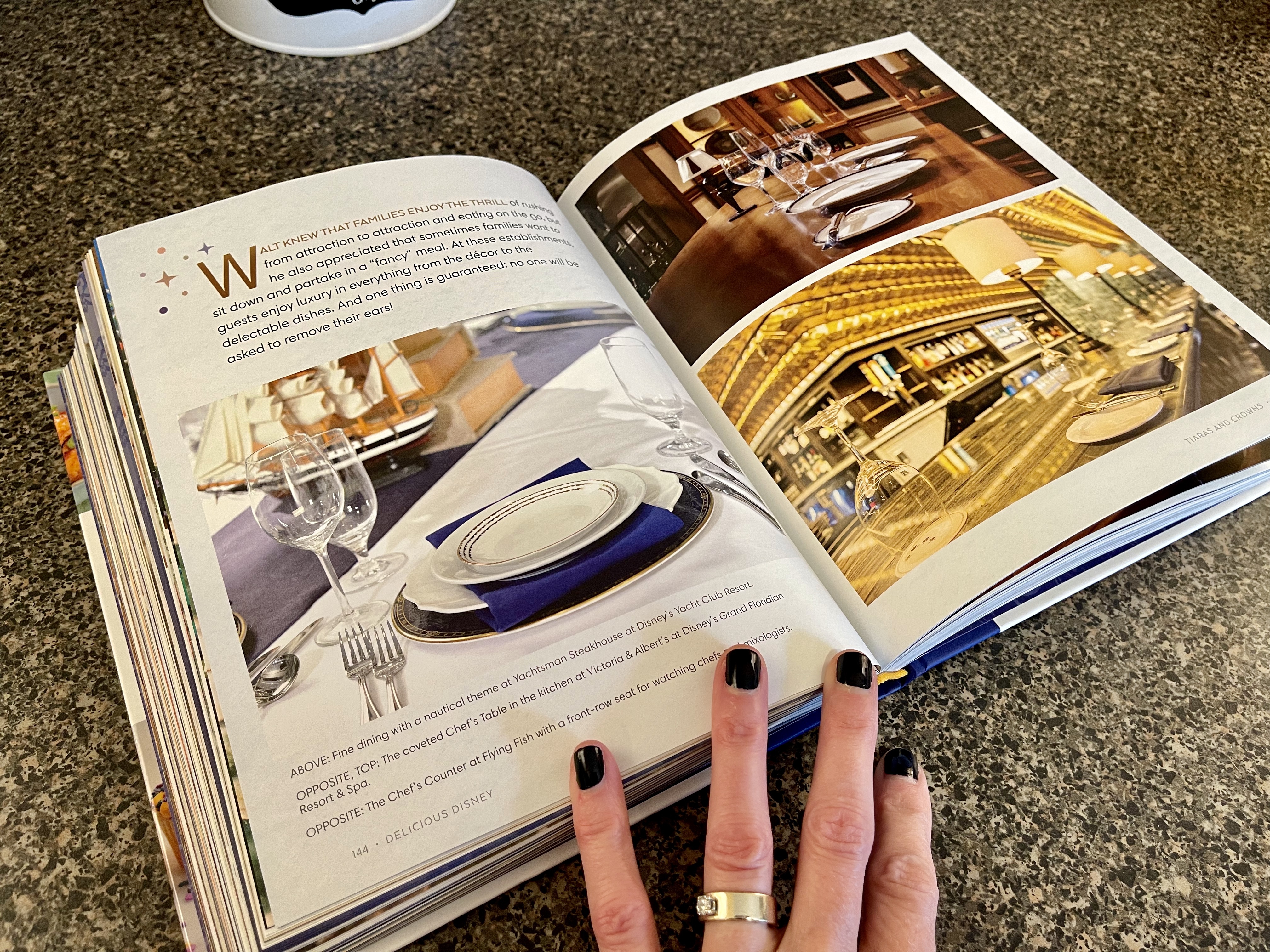 Speaking of the 50th Anniversary cookbook, I can’t recommend getting this cookbook highly enough. If you’re a fan of Disney World recipes, Walt Disney World history, or both, you’re going to want to get your hands on a copy. I’m not a huge fan of the Walt Disney World stock photos that are found scattered throughout, but that’s a pretty minor complaint because the book really is a legit treasure trove. 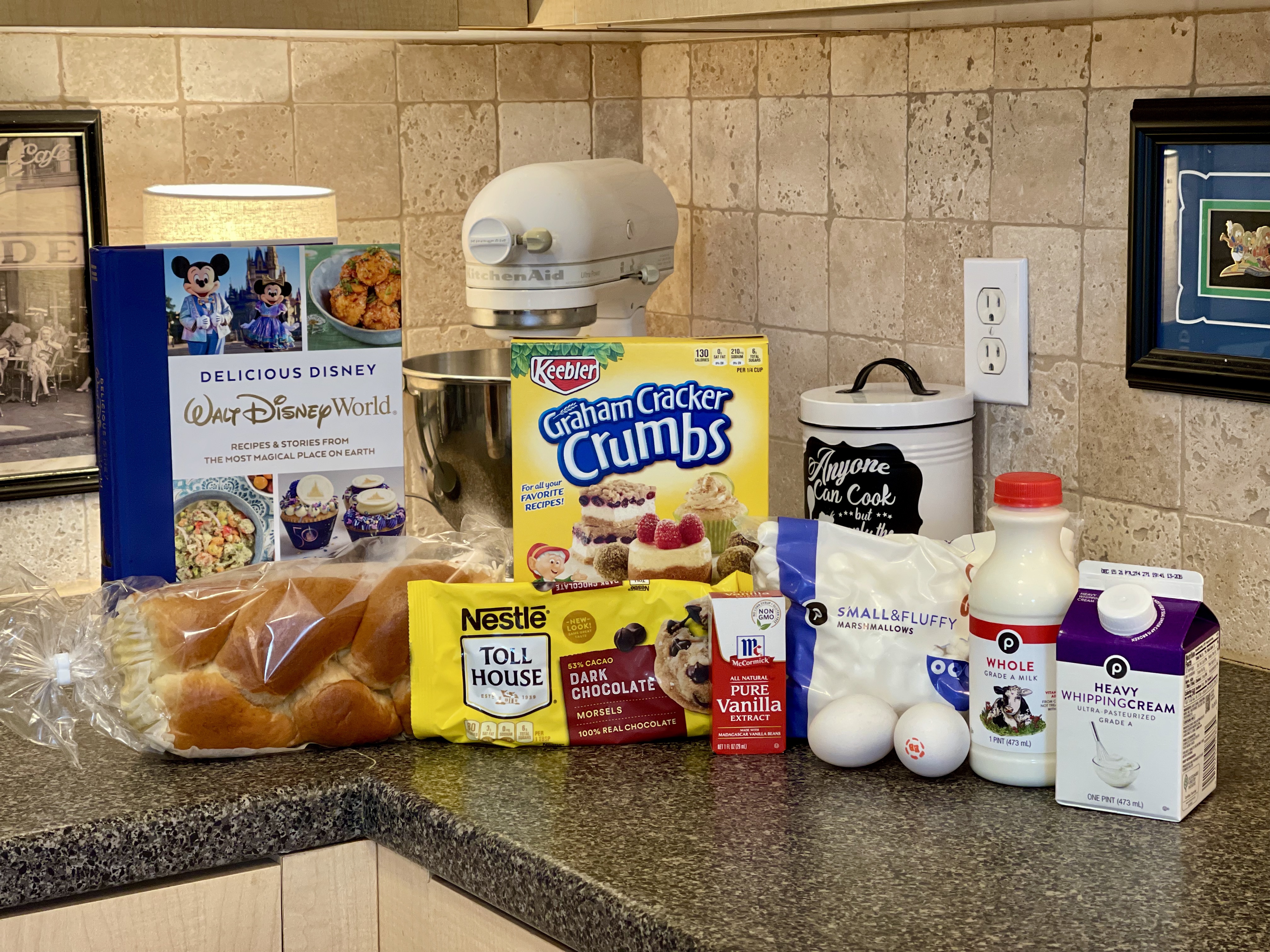 This week’s list of ingredients had me once again exploring the nooks and crannies of my local grocery store; this time focused in the bakery section. Side note: a huge shout out goes to the bakery team member who helped me find the brioche bread display (he admittedly said it’s hard to find as it moves locations all the time). Double shout out to him for being able to produce a ruler when I asked him for one. I didn’t have a ruler on hand, and the recipe asks us to use a loaf of brioche bread that has slices that are 3/4-inch thick. The pre-sliced loaf of brioche bread for sale had slices that looked slightly larger than 3/4-inch, but I wanted to confirm my suspicions. His neon green ruler proved me to be correct, and I purchased the unsliced loaf so that I could govern exactly how thick those slices would be. I suppose I should drop a ruler in my purse when I next head to the store to shop for Saturday Snacks ingredients. I’m afraid that eventually they’ll have my picture behind the counter in every department of the grocery store advising team members not to help this lady who asks the most random questions. Like if she could borrow a ruler to measure bread. And whether or not the eggplant in question could be classified as medium-sized. And on and on and on…

Back at the ranch, we’ll need both whole milk and heavy whipping cream for today’s recipe, which should tell both you and I right off the bat that this is going to be good. You’ll also need graham cracker crumbs, or as the recipe states, 6 full graham crackers that have been pulsed in a blender to create crumbs.

This is another recipe where I would recommend you doing a mis en place and getting all of the ingredients ready to roll before getting started. Of course, I did not do such a thing. Again, this is a perfect example of learning from my mistakes. I make the mistakes so you don’t have to. Ha ha. 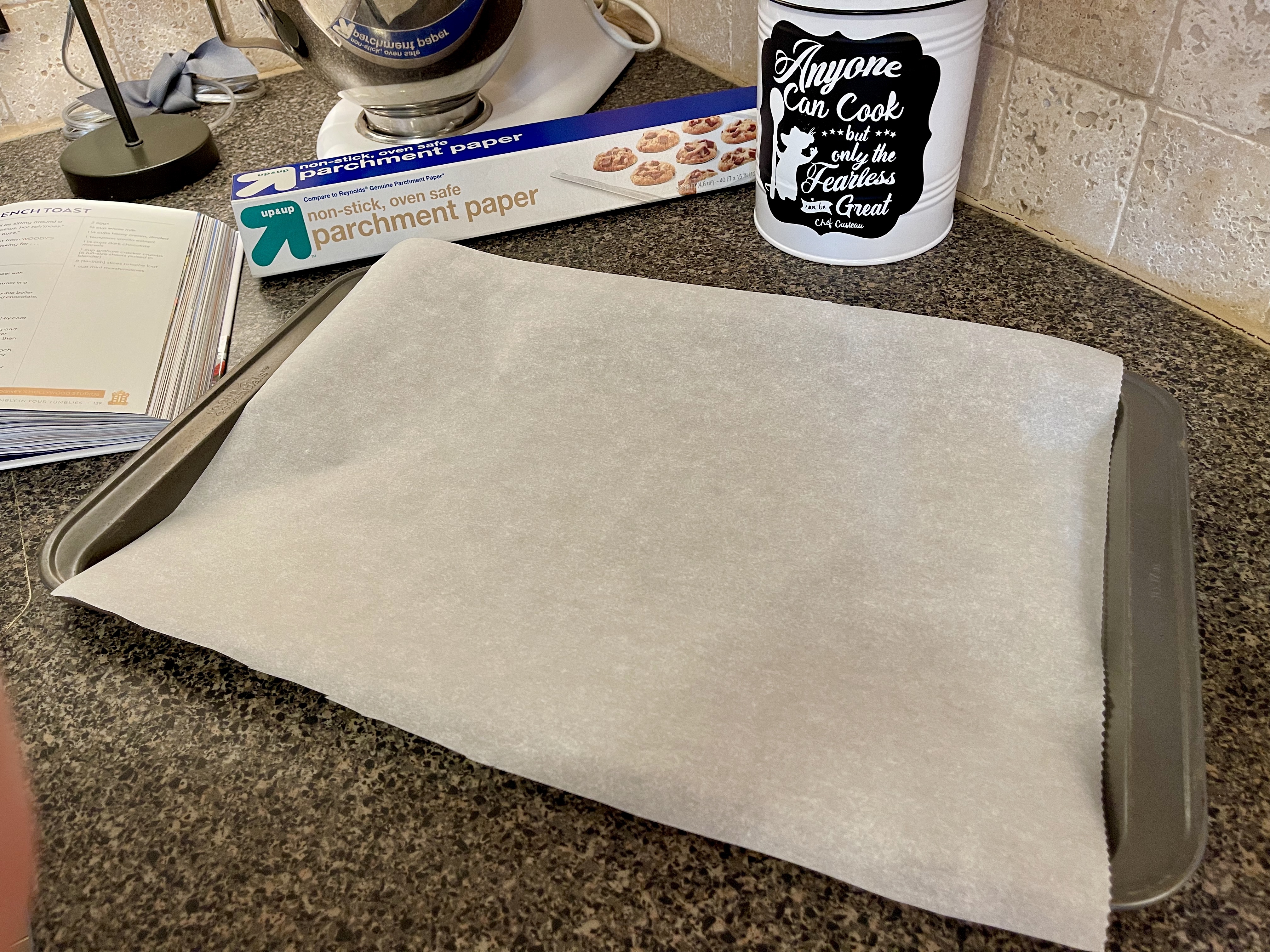 You’ll want to start things off by lining a baking sheet with parchment paper. After the French toast is done in the skillet, we’ll need to spread creamy chocolate over them and pop them into the oven, and having them on a large baking sheet just makes everything easier. You could also go ahead and preheat the oven to 400° at this point, but if you choose to wait just a bit, no worries. We have a few steps to tackle before getting to the point where we pop things into the oven.

Next step is to grab a fork and beat the two eggs, 3/4 cup of whole milk, 3/4 cup of heavy whipping cream, and 1 teaspoon of vanilla extract in a medium-sized bowl. Once you’ve got everything beautifully combined, set the bowl aside. 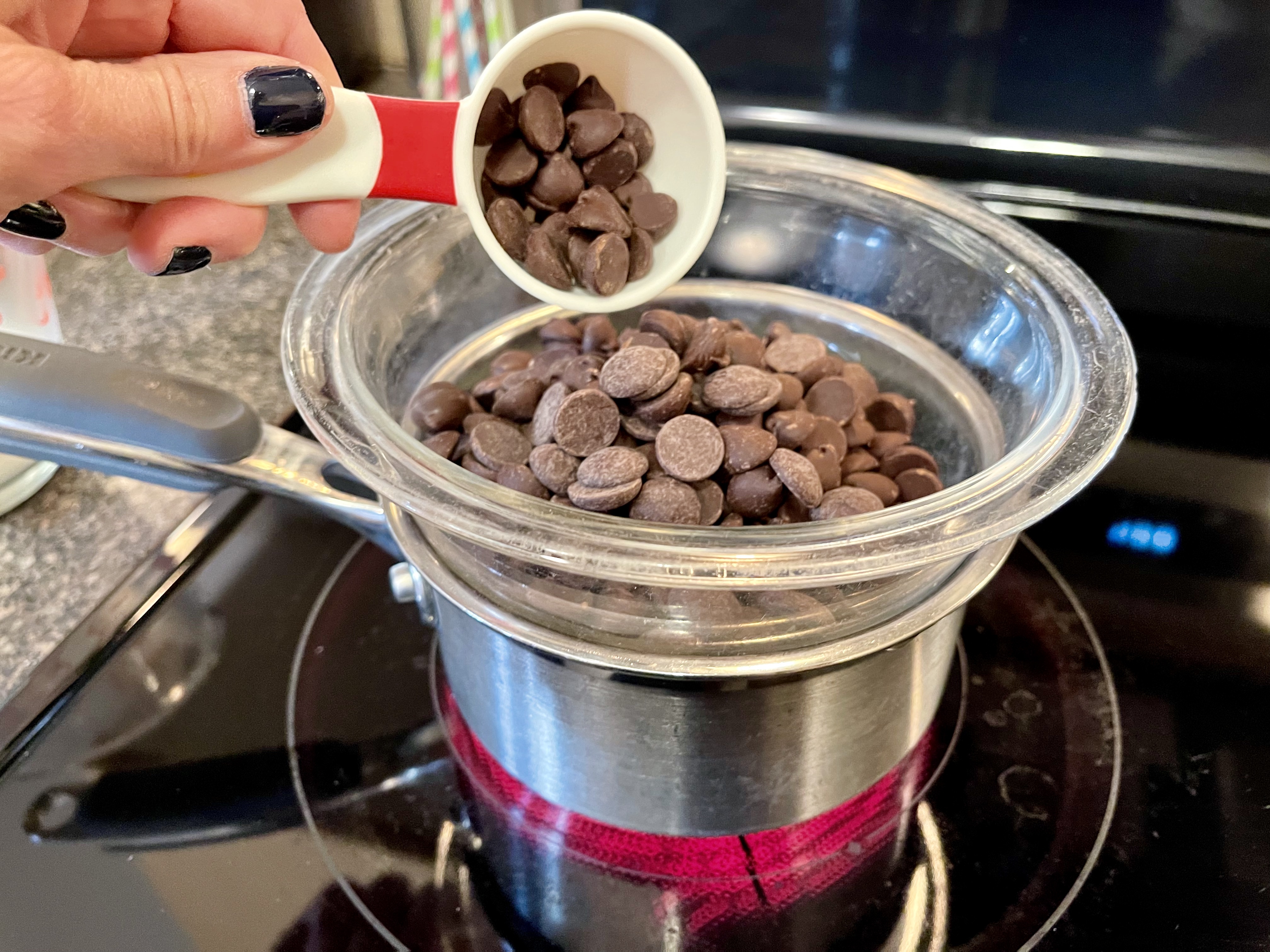 Our next step has us cracking open a fresh bag of dark chocolate morsels and melting them using a double boiler method on the stove top. If you haven’t done the step before, it’s fairly simple. All you need is a small sauce pan and a glass bowl that can sit on top of it. Fill the sauce pan halfway with water, and let it come up to a rolling boil on the stove.

When the chocolate melts, add the remaining 1/2 cup of heavy whipping cream to the melted chocolate, and whisk everything until nice and smooth. This step can take a little bit of both elbow grease and patience; hang in there, your persistence will pay off. The end result will be a lovely creamy chocolate spread. When things look nice and smooth, set the bowl aside.

While we’re focused on the creamy chocolate spread, I’d like to give a shout out to the chefs who created this dish. A lot of the sweet treats that we’ve seen come out of Woody’s Lunch Box contain hazelnut spread. As someone who is allergic to hazelnut, and who only truly learned of the extent of said allergy after eating one of Woody’s hazelnut lunchbox treats one evening (sigh), it’s so nice to have a sweet treat that isn’t centered around hazelnut. And, spoiler alert, you’ll have plenty of that creamy chocolate spread left over to do with as you please. Want to dunk your S’mores French Toast in that leftover spread? Go for it. Have a hunk of a Gideon’s cookie hanging out in your freezer from your last trip to Disney Springs? That’ll be fantastic topped by that chocolate spread. Just about anything and everything can be dunked or covered in that spread. 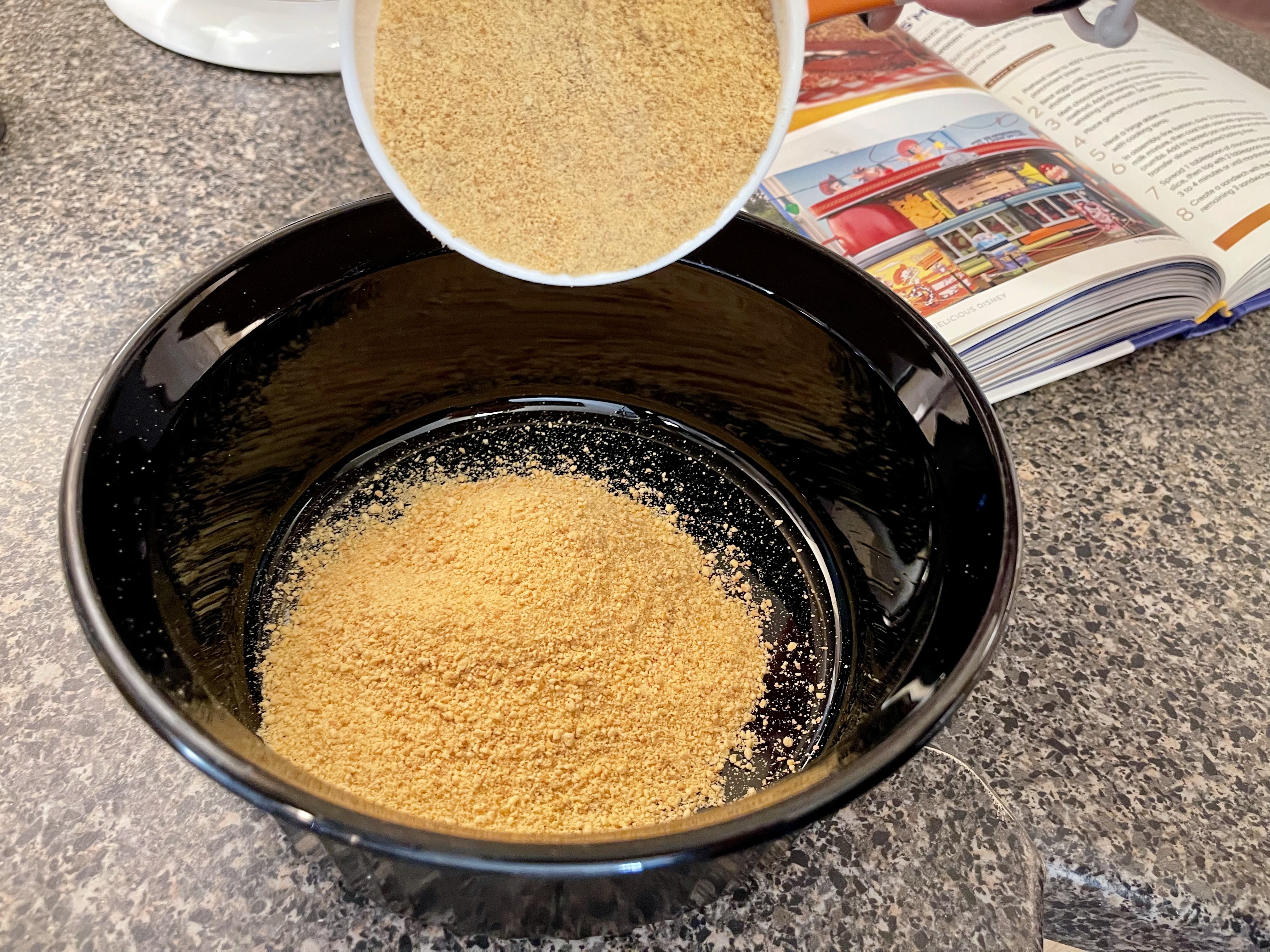 You’ll next want to grab another medium-sized dish and pour 1 cup of the graham cracker crumbs inside. You’re going to make a French toast assembly station right here on your kitchen counter, and those cracker crumbs are the last thing that your slices of brioche get covered in before hitting the skillet.

It’s now time to cut the slices of brioche bread to the recommended 3/4-inch thickness. I grabbed my ruler and my sharpest of knives, and proceeded to cut each one according to the recipe.

When all was said and done, I deemed that the sandwich in the picture that accompanies the recipe is actually made with 1/2-inch thick bread. So really, you and I need not stress over the thickness of that bread. Want it a little bit thicker and an end result that is a bit softer? Use a thicker slice of bread. Want things just a little bit more on the crisp side? Use a thinner slice of bread. You’re the boss of that French toast. 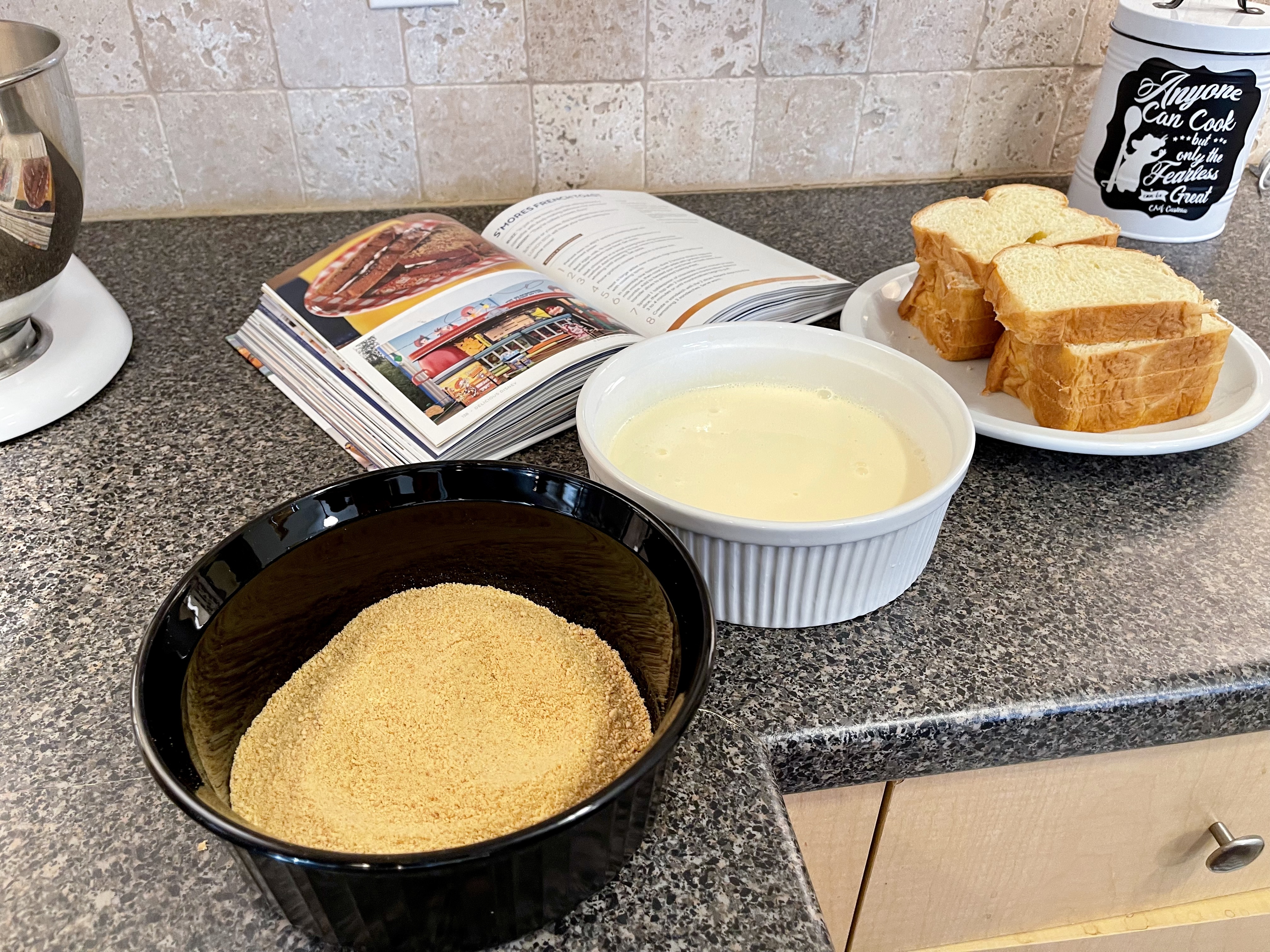 You might need to sprinkle some of the crumbs on top of the slices if you have spots that don’t pick up crumbs. I wanted every single bit to be covered in those yummy crumbs, so I sprinkled crumbs where I needed to. 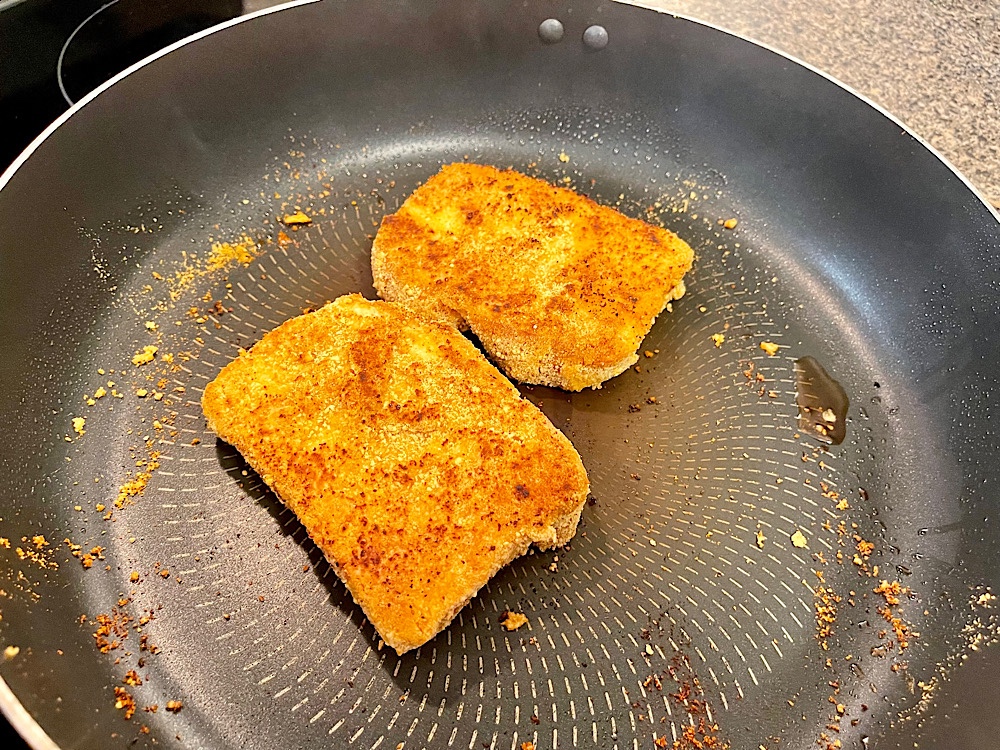 We’re asked to heat the pan that we’re going to use for the French toast over medium-high heat. I gave the skillet a good coat of cooking spray and brought things up to temp. I placed two slices of brioche bread at a time in the center of the skillet and allowed them to cook until I saw dark brown areas on the surface of the toast. I didn’t want to get things too done, so once they had little dark brown spots, I pulled them out of the skillet and placed them on the parchment paper-lined baking sheet.

Now comed the glorious moment that you and I get to utilize that chocolate-cream mixture. The recipe asks us to top to each slice with 1 tablespoon of the chocolate (all the way to the edges, friends…yummm) and 2 tablespoons of mini marshmallows, which equates to 12 marshmallows. Once everything was topped with chocolate and marshmallows, I placed the pan in the oven for 3 or 4 minutes or so. We are to take the pan out of the oven when the marshmallows begin to puff up. 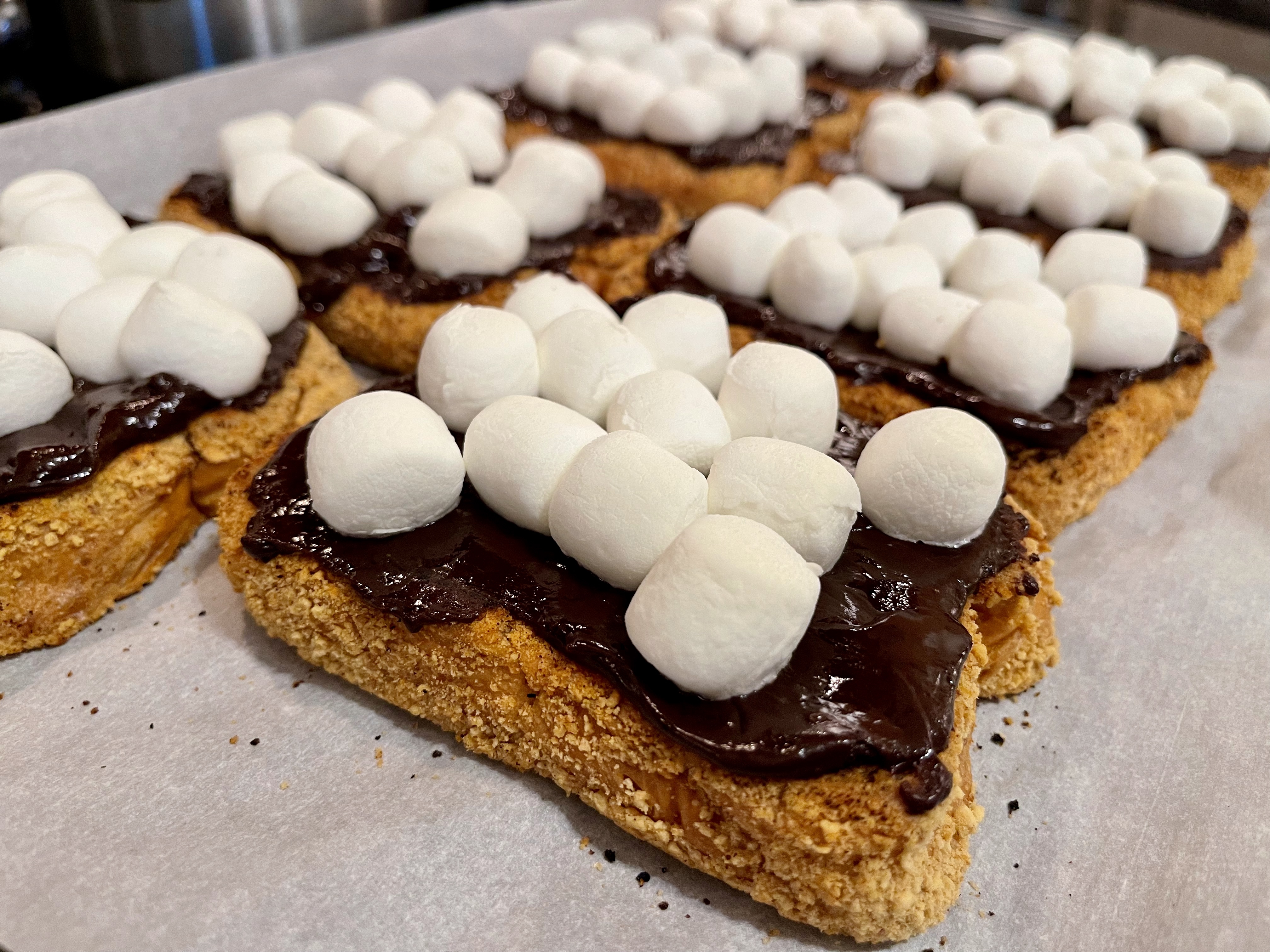 Once the marshmallows are nice and puffy, pull the pan out of the oven and create a sandwich with two of the slices. You get to do you here: wait and allow the marshmallows to cool a little bit and they’ll hold their shape a little bit more or slap to those hot slices together and gobble it up with a fork and knife in all its gloriously melty goodness. You’re the chef in this kitchen, and you get to call the shots. 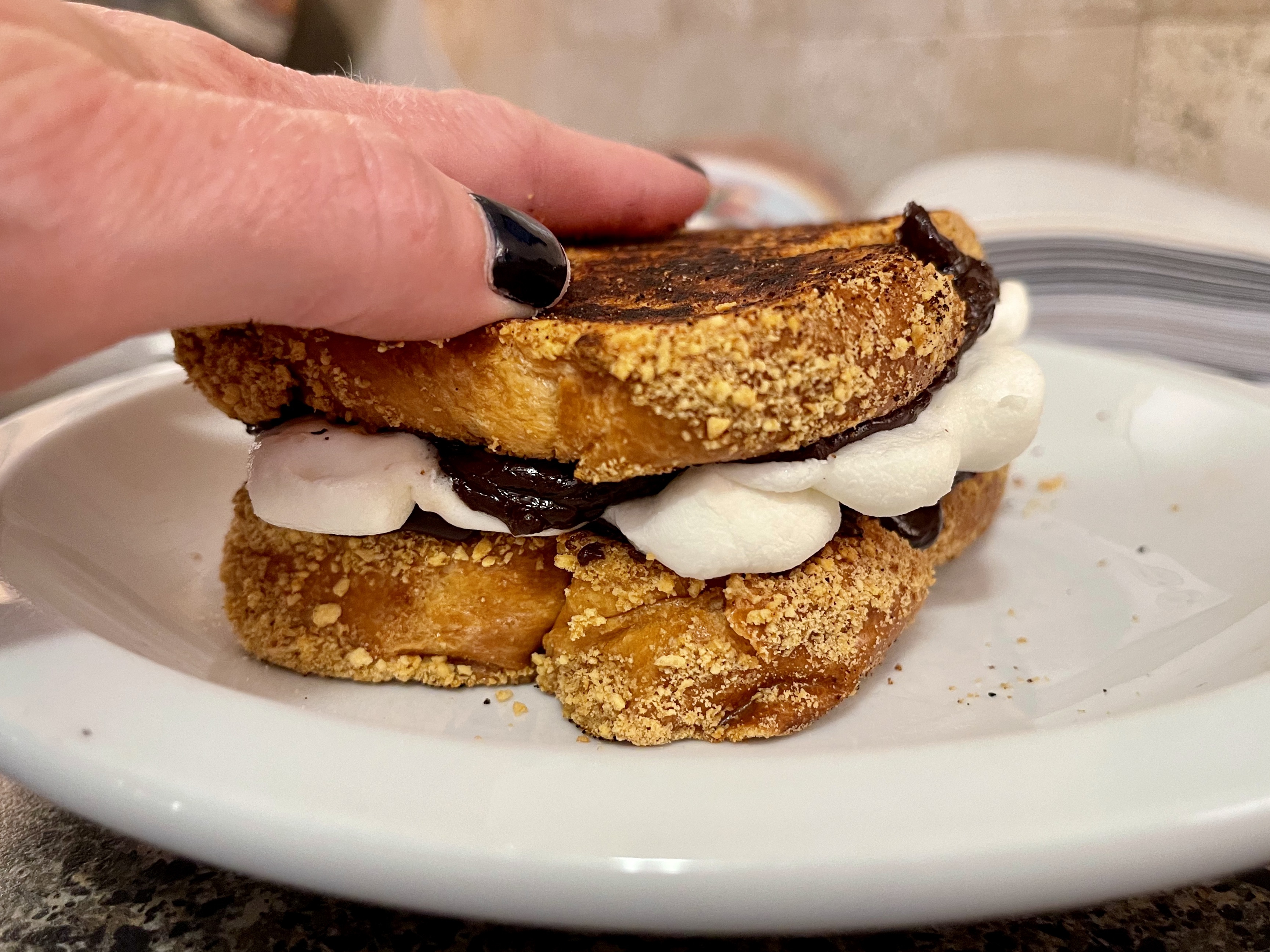 Because of my natural somewhat impatient inclination when it comes to food, the first two slices went together right away. And it was so melty gooey and good. 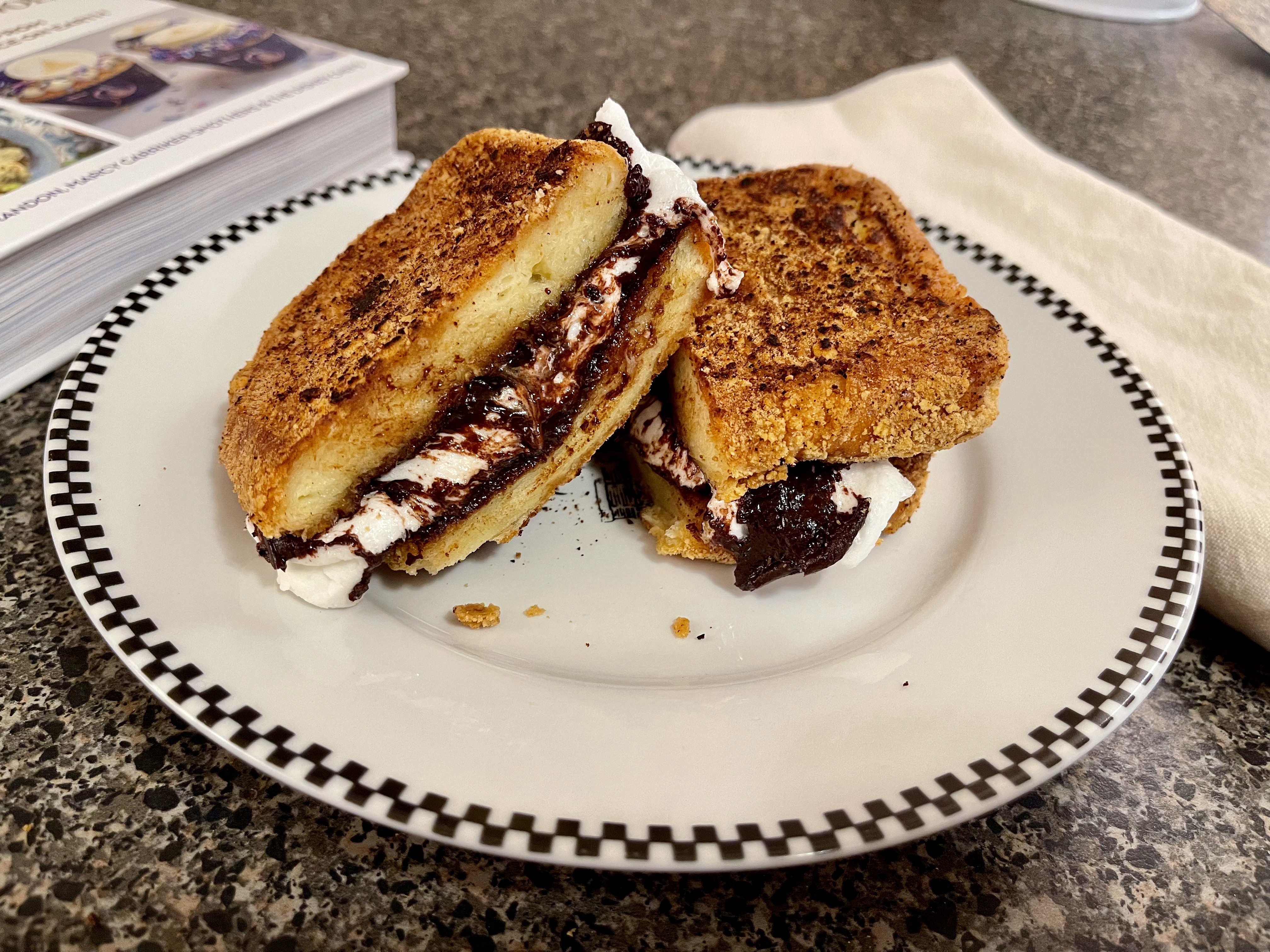 The second sandwich was a tad more aesthetically pleasing, however, because I waited just a bit to allow the marshmallows and chocolate spread to cool slightly. I could actually pick up and eat the second sandwich as a sandwich, while the first sandwich definitely required a knife and a fork. 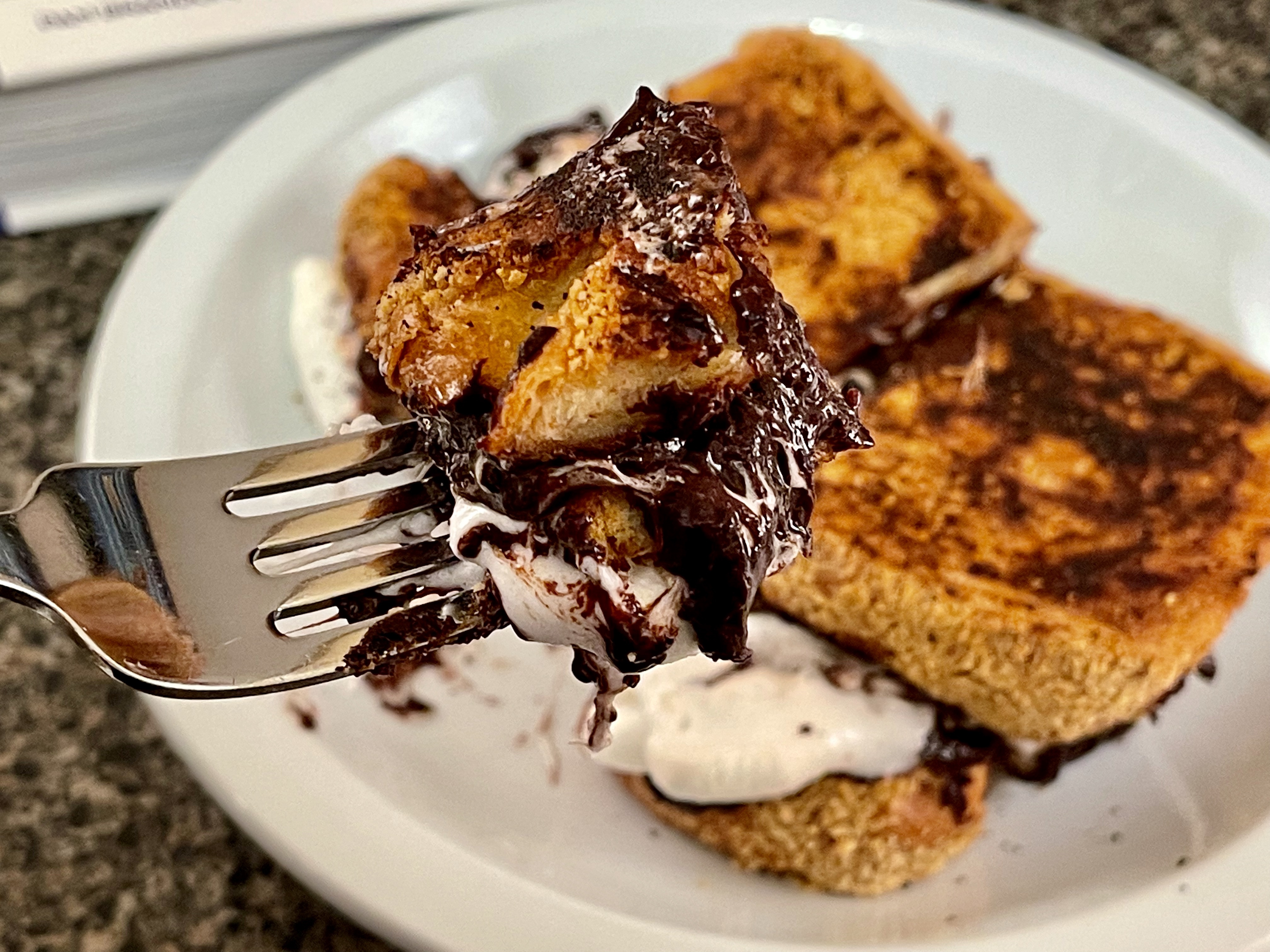 Dear friends, this is the perfect treat for a weekend. It combines all of your favorite s’mores flavors in one delightful breakfast-adjacent treat. It is, as you would expect, very sweet. But those graham cracker crumbs help tone things down just like they do when you’re making a s’more over a campfire.

For someone who loves s’mores, this was a delightful treat, and if you’ve got kiddos in your house, this is something they’re going to love getting to put together. Of course, if you have kiddos in your house and you feed them this for breakfast, you might also need them to do laps around the house later in the morning to burn off the resulting sugar high. Just a warning. 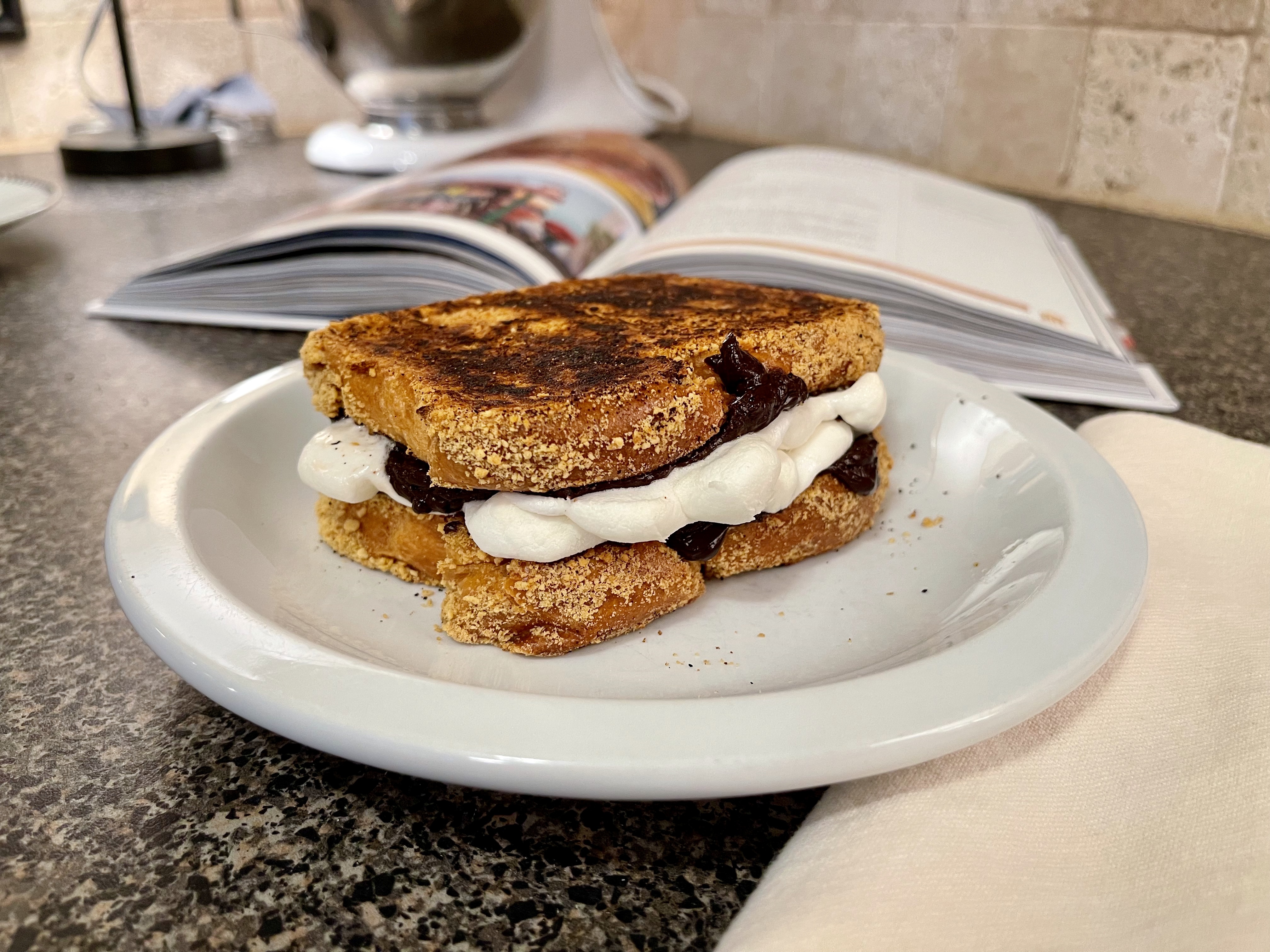 Fall and Walt Disney World and s’mores. For breakfast. It doesn’t get much better than that.

If you decide to make Woody’s Lunch Box’s S’mores French Toast, please let me know what you think in the comment section below.

I hope that your weekend is a great one. Savor the cooler weather (there is actually a little bit headed our way, too!) and love every minute of it. Thanks so much for reading!

Ready to whip up some sweet and delicious Walt Disney World fun in your kitchen? The recipe for Woody’s Lunch Box’s S’mores French Toast is below: