I’m not exactly sure where along the line soufflés got such a bad reputation for being incredibly difficult to make, but alas, they did. The soufflé is usually beautiful to look at and delicious to eat, and can be a fairly easy thing to make. It does require a bit of gentility and patience, however. And you’ve only got a short time to stand there and admire it when it’s done, so when it comes out of the oven, quickly gather all of your loved ones in the kitchen to oooh and ahhh ‘cause that beauty is short-lived.

The search for this week’s recipe had me looking for something that would be fairly quick and easy to make, and that involved a lot of chocolate. You know those days when you just need chocolate? And something warm and comforting and good for the soul? Yep, that was required, and thankfully, I came across the Grand Floridian’s Classic Chocolate Spice Soufflé recipe to meet the need.

Chef Erich’s soufflé recipe can be found in Cooking with Mickey. To be very honest, this was a cookbook that I put in the cabinet months ago and swore to never use again. Several of the recipes that I tried for Saturday Snacks out of this cookbook just did not pan out. Not one bit. I cursed the cookbook and stuck it in the cabinet, and the fact that I’ve pulled it back out for this weekend’s Saturday Snacks recipe should indicate how very desperate I was for a little something easy, warm, and chocolatey. And it should also indicate that there’s a bit of precariousness involved in today’s snack. It could come out beautifully, or horribly. It’ll be chocolate with a side of tension. 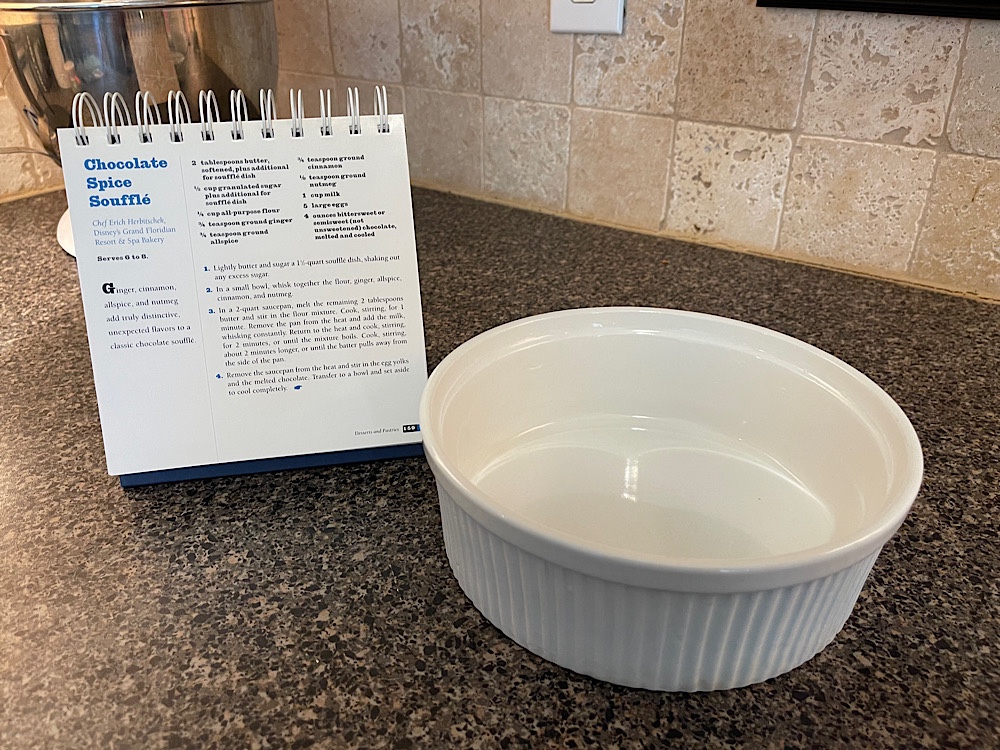 To get started with the recipe, you’ll need a flat-sided soufflé dish. Thankfully, they’re easily found in stores and not too expensive to pick up. And also thankfully, I’ve been given two of said dishes along the way. I’ve made all sorts of things in those soufflé dishes, and it’s always fun to actually be able to use it for its intended purpose. 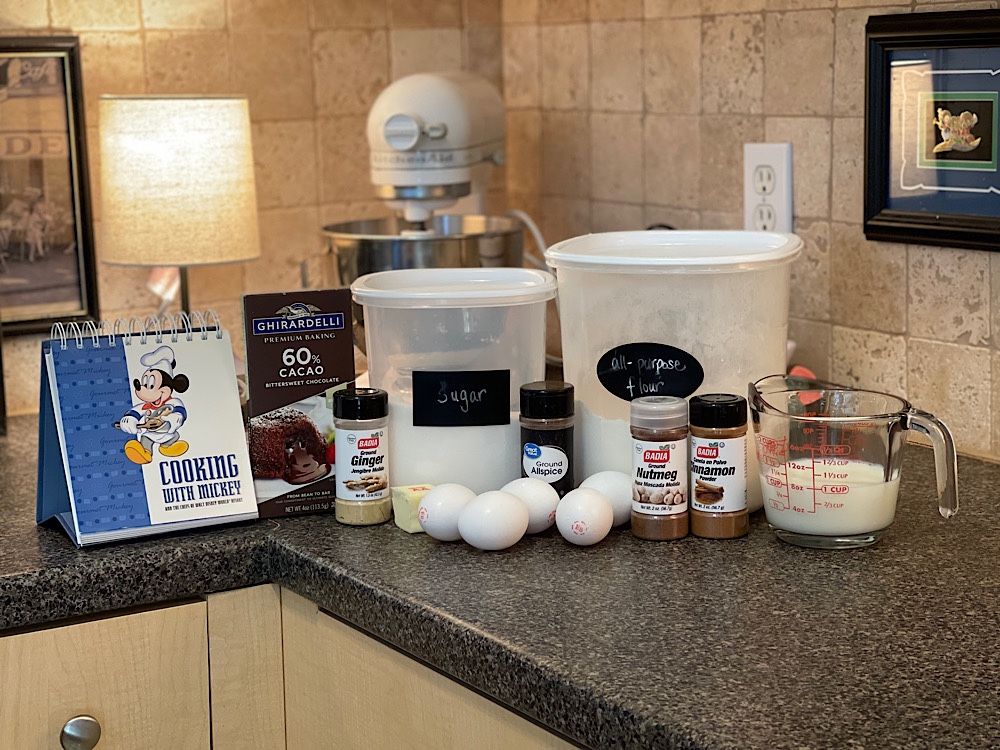 The second thing we’ll need for the recipe is 4 ounces of bittersweet chocolate. We’ll also need 5 eggs, so be sure to pick up a fresh dozen at the store when you’re getting that chocolate. 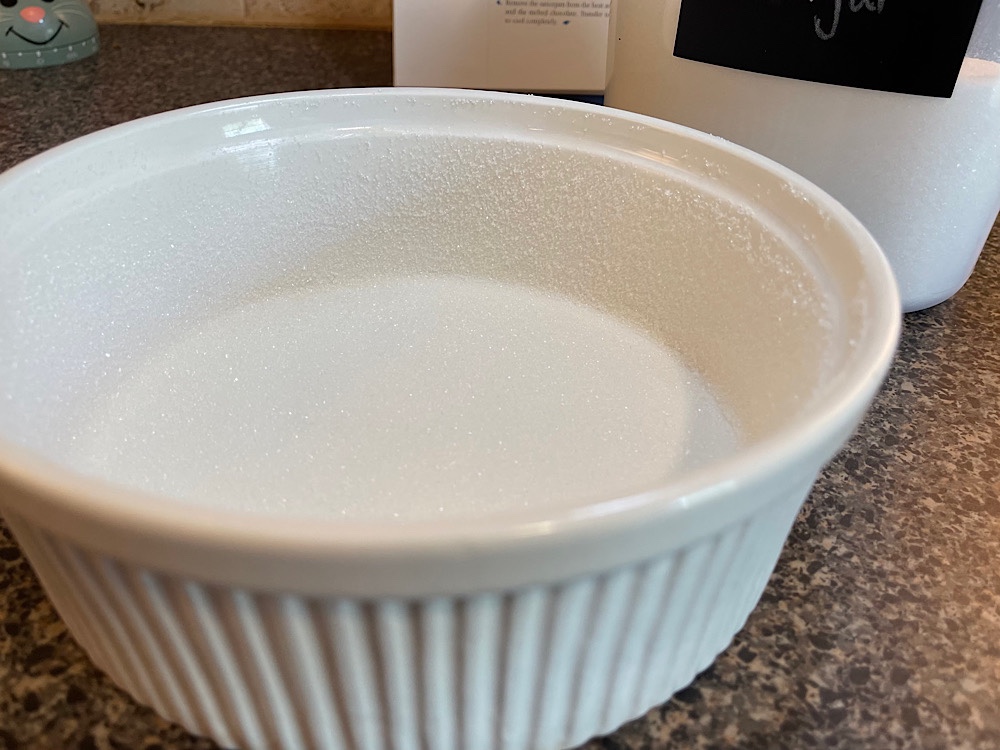 Go ahead and grab a pat of butter from the fridge (separate from the 2 tablespoons of butter that needs to sit on the counter and come up to room temp just a bit) and coat the inside of the soufflé dish with it. After buttering the dish, sprinkle in a bit of sugar and roll it around until the entire inside of the dish is coated. 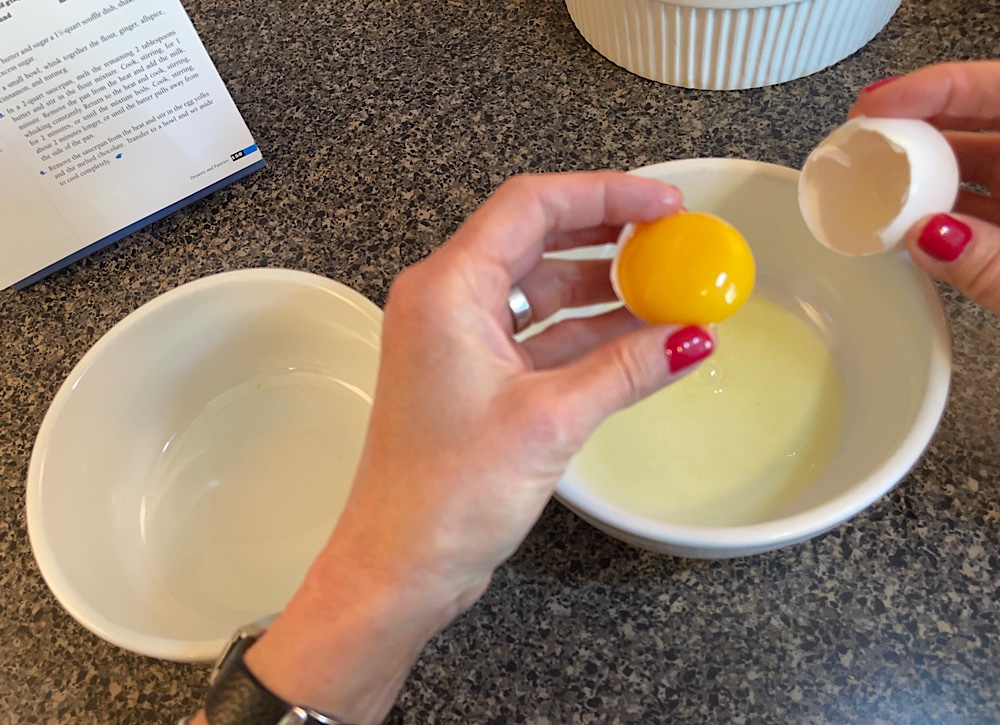 Another step that I tackled at this time was to crack open the eggs and divide the yolks from the whites. The recipe doesn’t specify that the eggs must be divided, but they do. Getting this step done and out of the way early made things go more smoothly later. 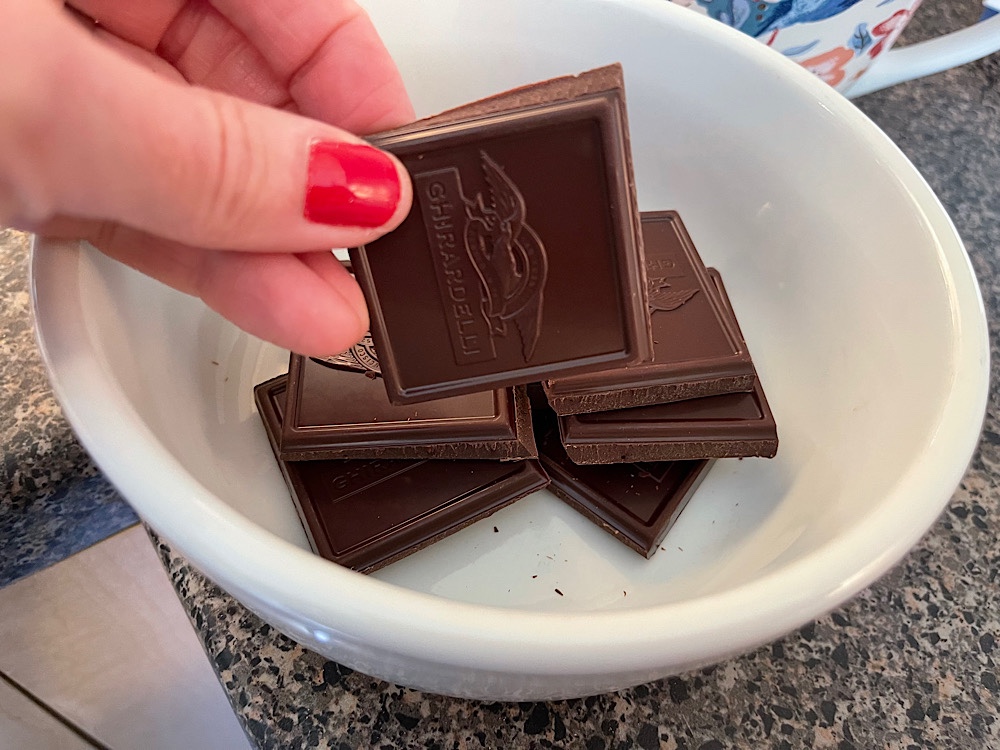 The other thing that I would recommend doing at this point would be melting the 4 ounces of bittersweet chocolate. I skipped this step and found out halfway through the whole shebang that that needed to have been done. Place your squares of chocolate in a microwave-safe bowl, and pop that baby in the microwave for 90 seconds at 50% power. 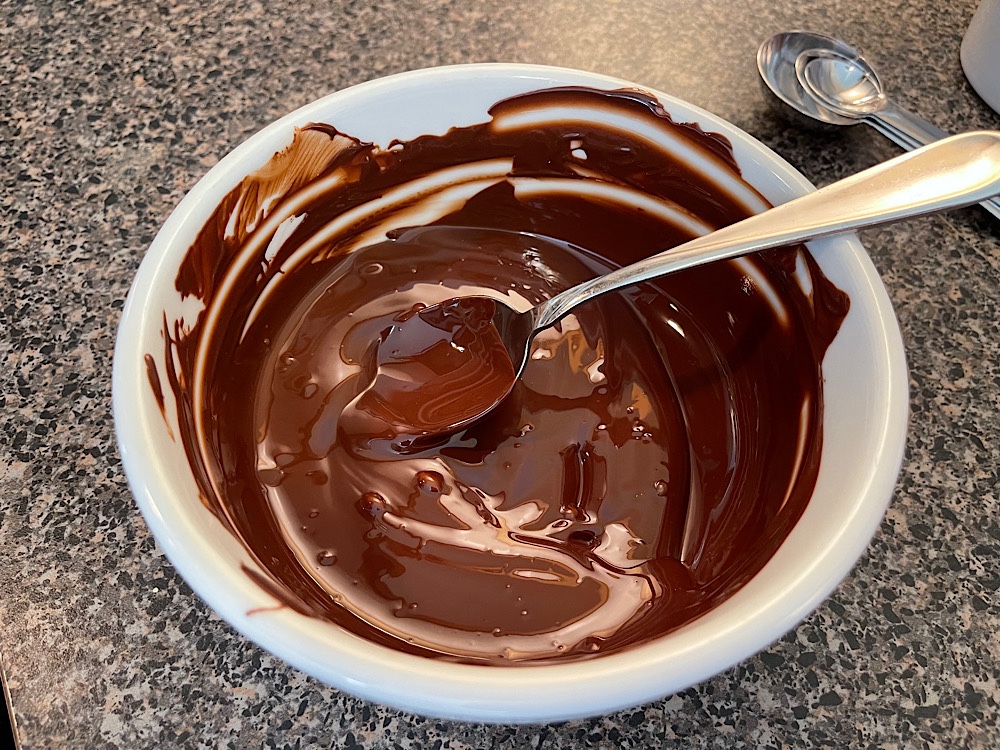 Give it a stir when the 90 seconds are up, and pop it back in for 30-second intervals. Stir and stir and sooner or later, your chocolate will be smooth and glossy. I popped my bowl of melted chocolate into the fridge to speed up the cooling process since I was late to the game with the whole melting the chocolate step. You do you. Get that chocolate cool however you need to. 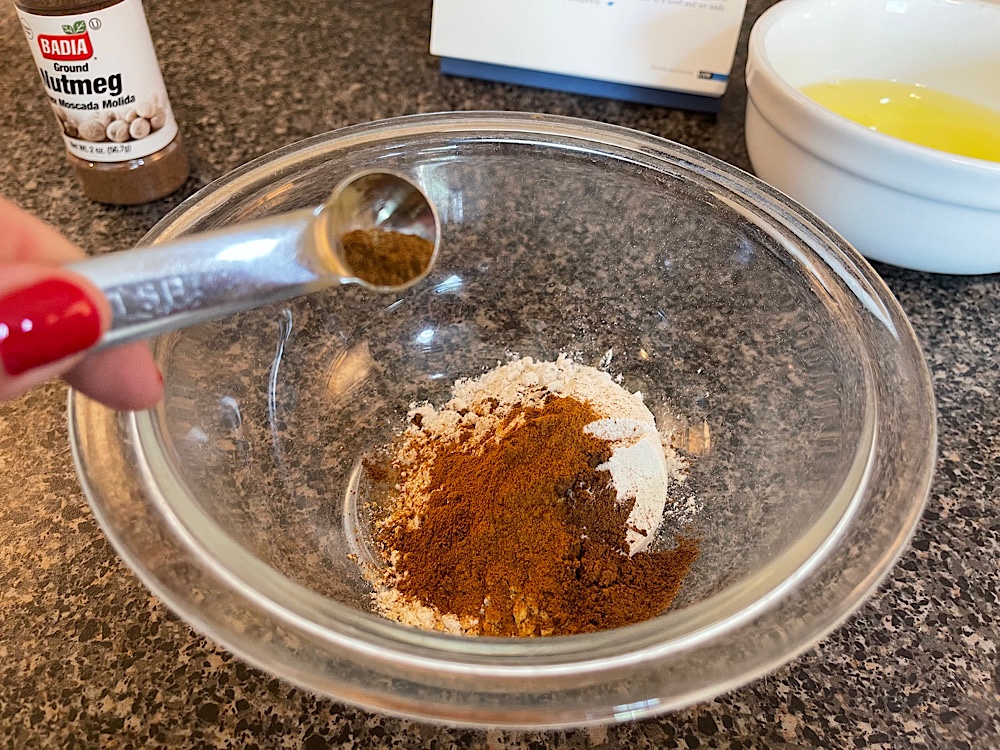 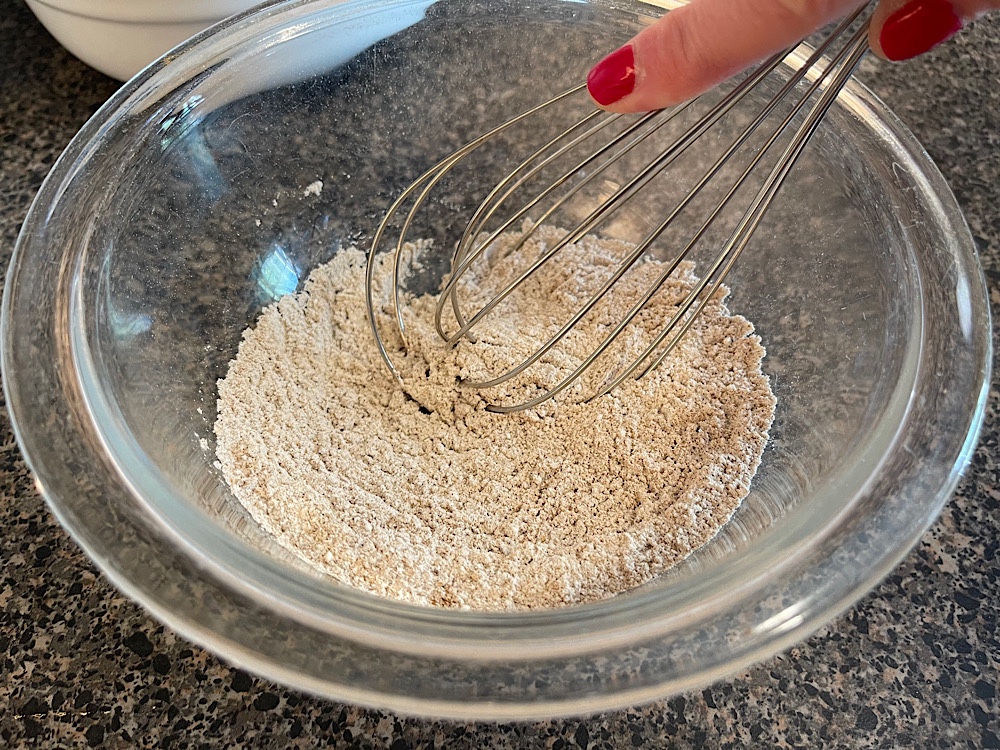 I whisked everything until the ingredients were thoroughly combined. Before you set the bowl aside to move on to the next step, breathe in what you just mixed up in that bowl. The beautiful, rich scent of those spices are intoxicating. 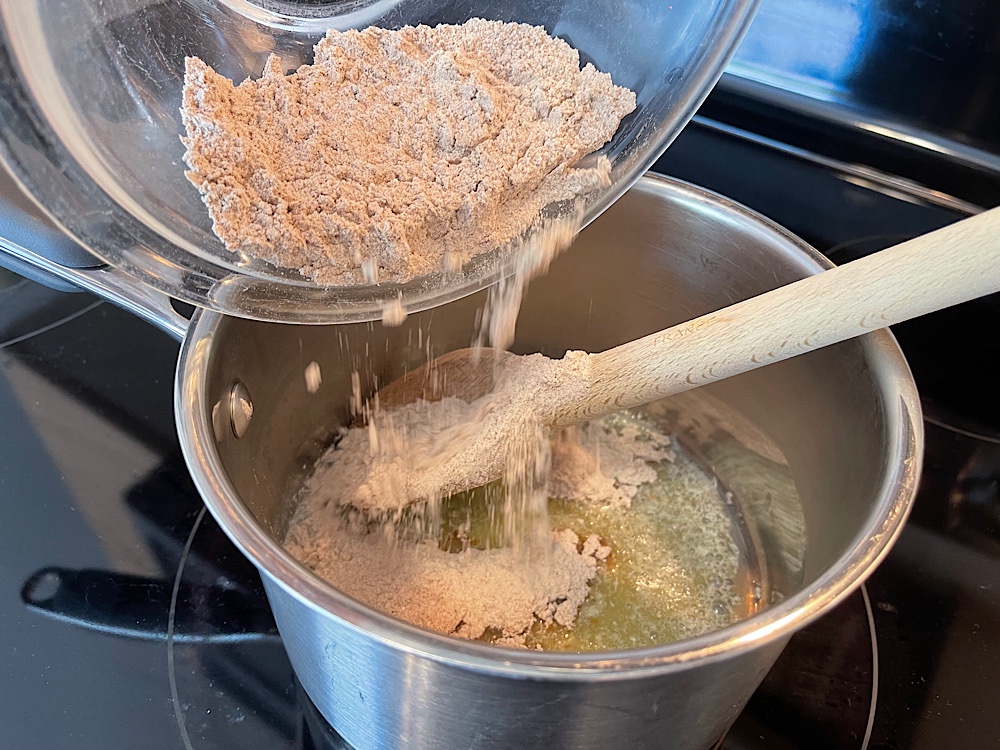 I grabbed my medium saucepan and quickly melted the 2 tablespoons of butter. To the melted butter, I added the flour mixture and whisked and cooked it on medium heat for a minute. 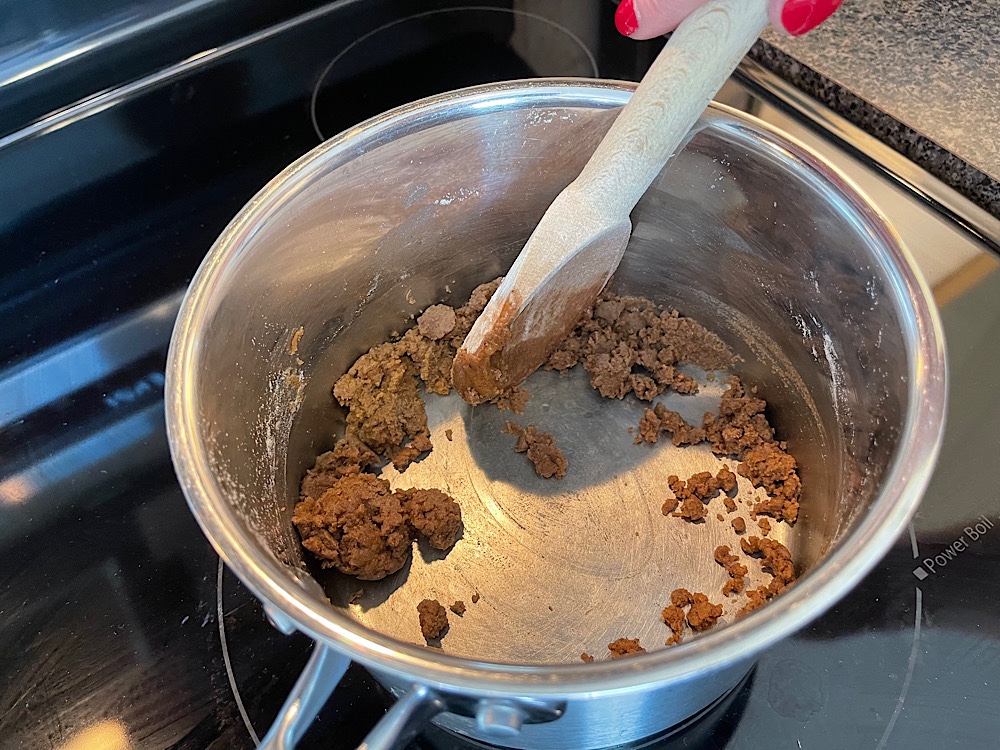 Things got clumpy, but I stayed with it. 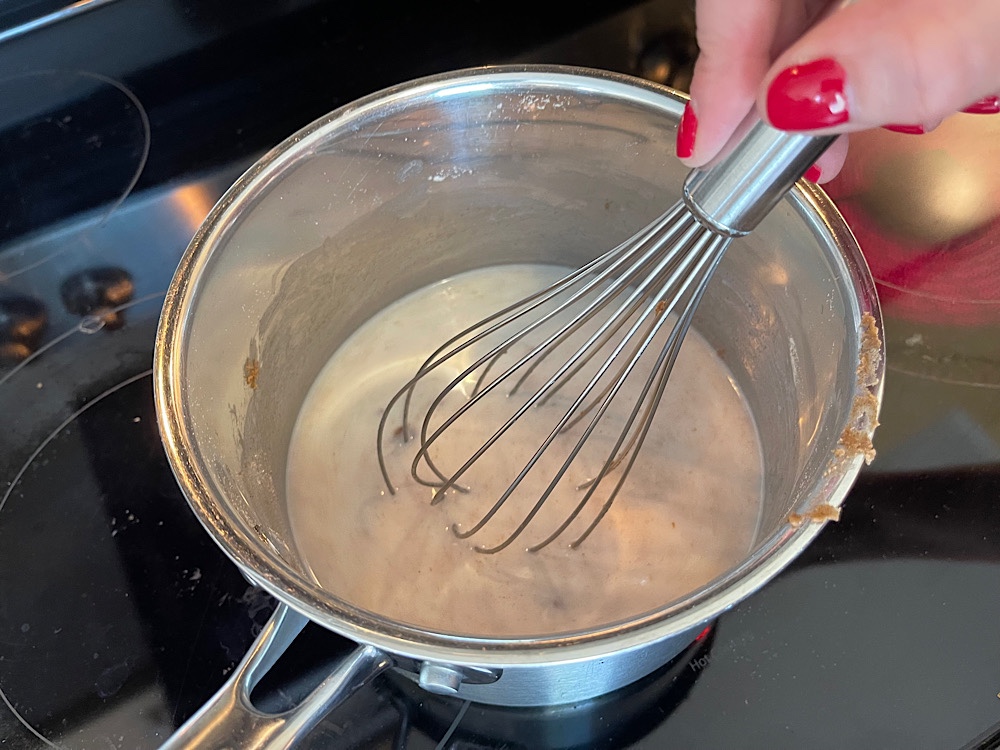 When the minute was up, I pulled the saucepan off of the heat and poured in the one cup of milk. The recipe says to do so while whisking, which was a small step that I missed along the way. I made up for it by giving everything a thorough whisking once it was said and done. 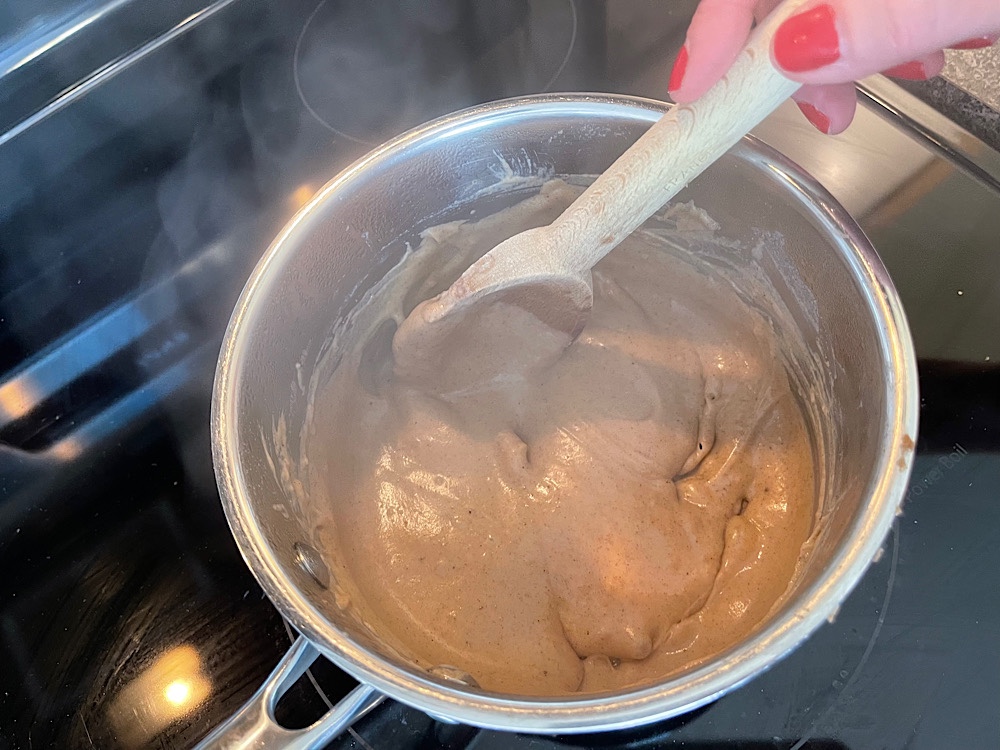 I put the pan back on the medium heat and stirred and cooked the mixture for two minutes. Once the mixture begins to boil, we’re supposed to continue stirring and cooking for two additional minutes. As things cook, they’ll become thick. 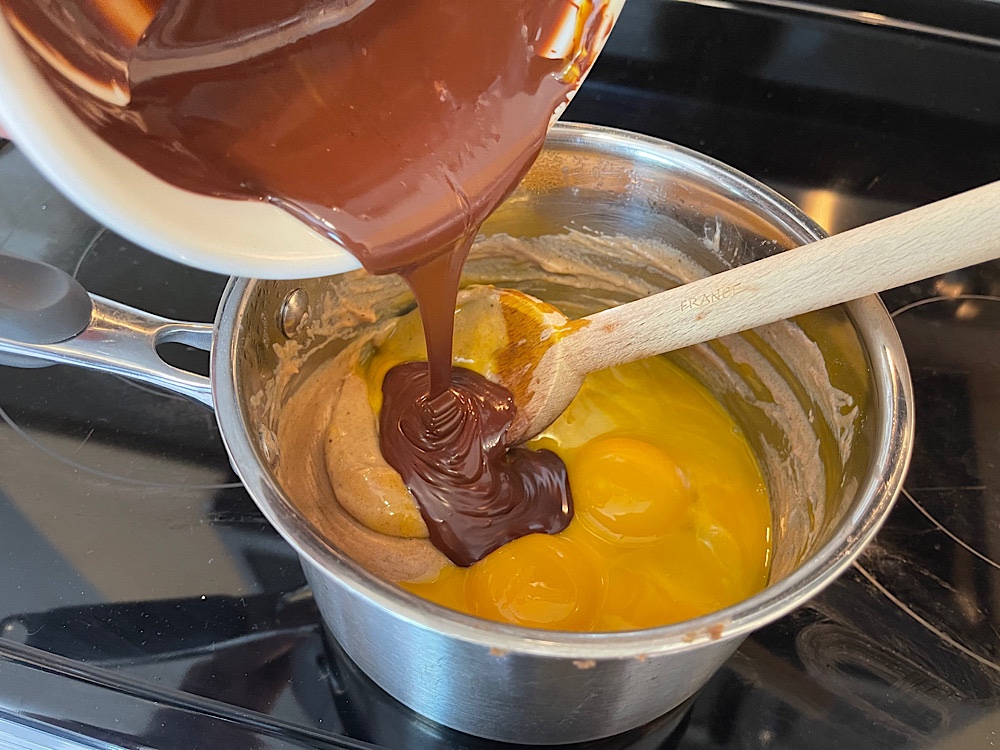 When the batter pulls away from the sides of the pan, pull the saucepan back off of the heat and stir in the egg yolks and melted chocolate like the recipe instructs. 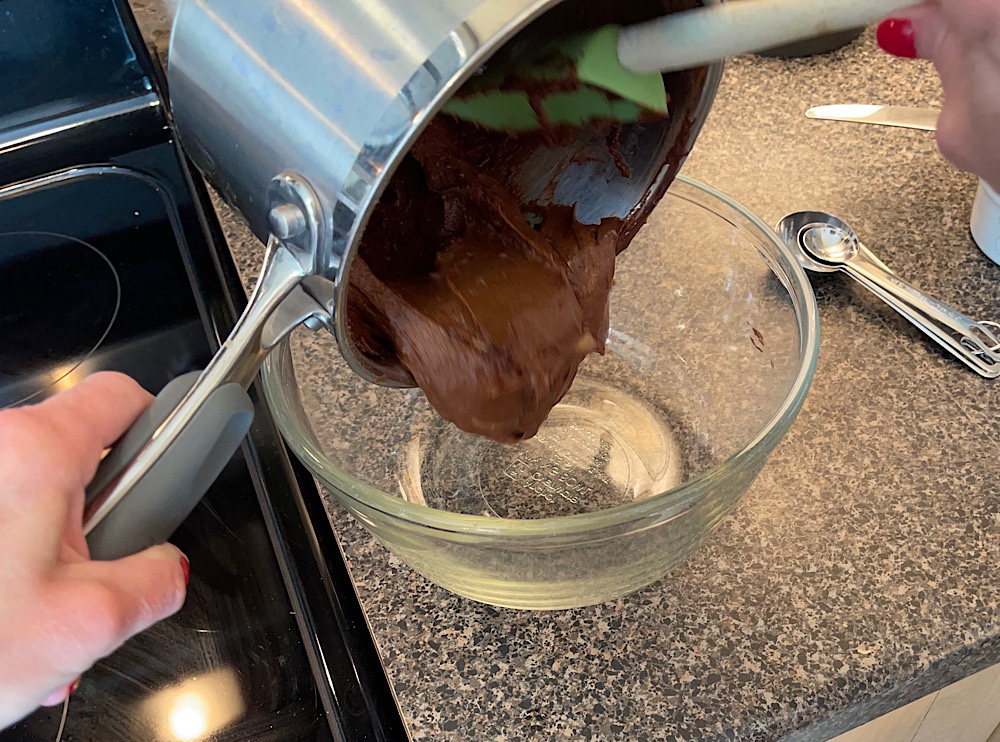 Once you’ve got everything nice and combined, transfer it into a bowl to cool. 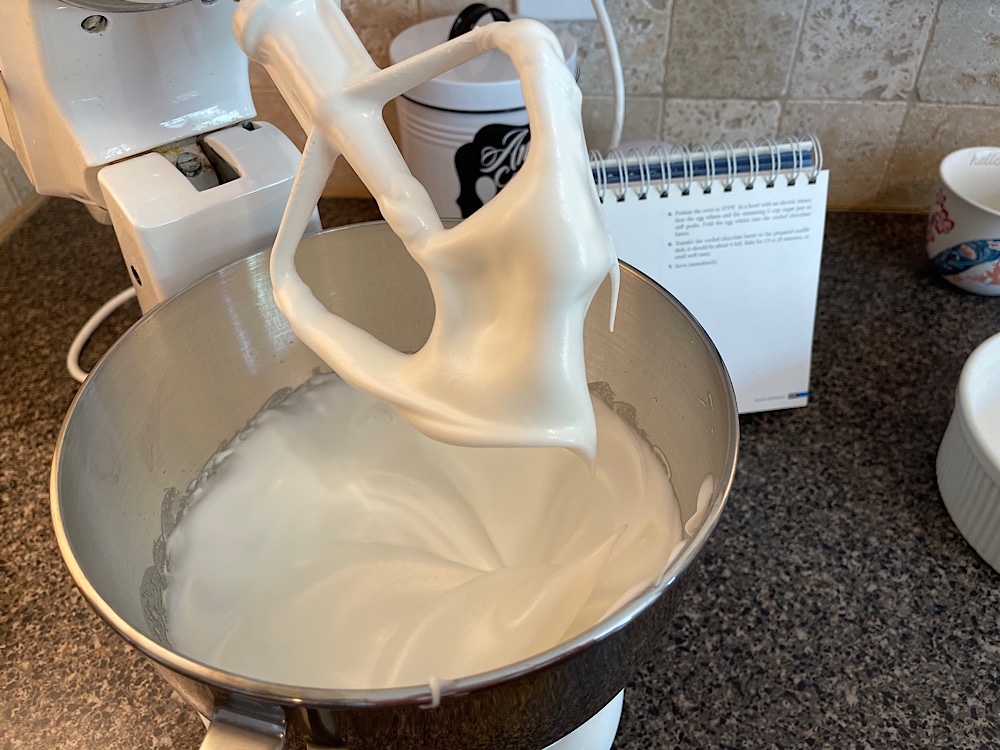 The next step in the soufflé process was to create the egg white mixture that will be folded into the chocolate mixture before everything goes into the oven. I tossed the egg whites into the bowl of my stand mixer along with half of a cup of sugar, and cranked the mixer up to medium-high. We’re supposed to get those egg whites to the point where they are just at forming stiff peaks. 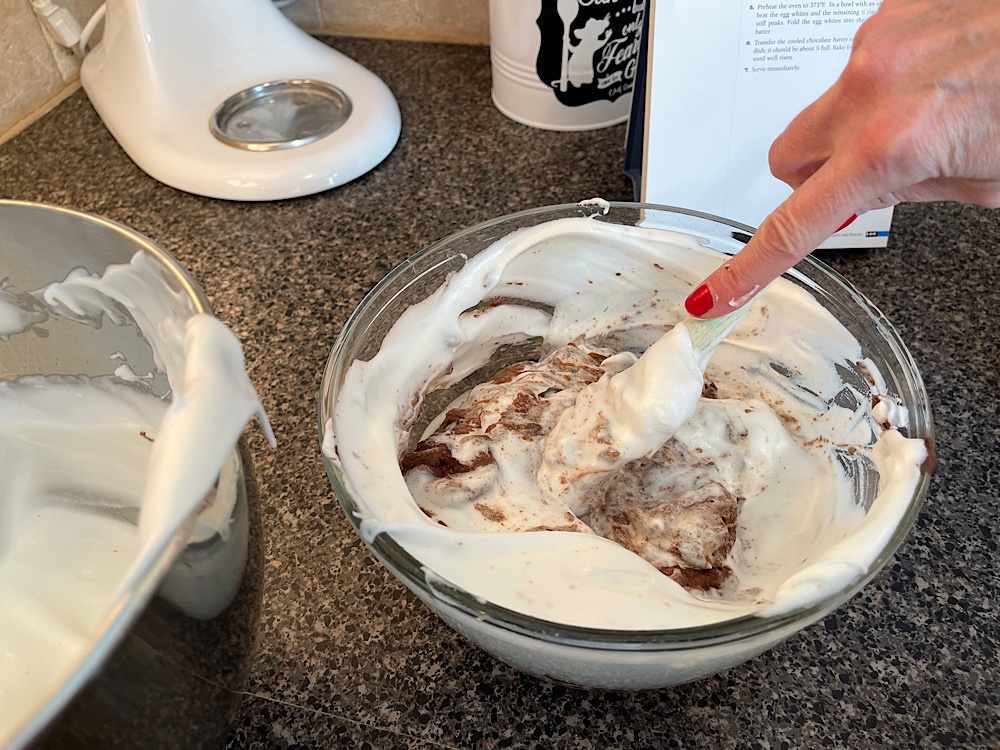 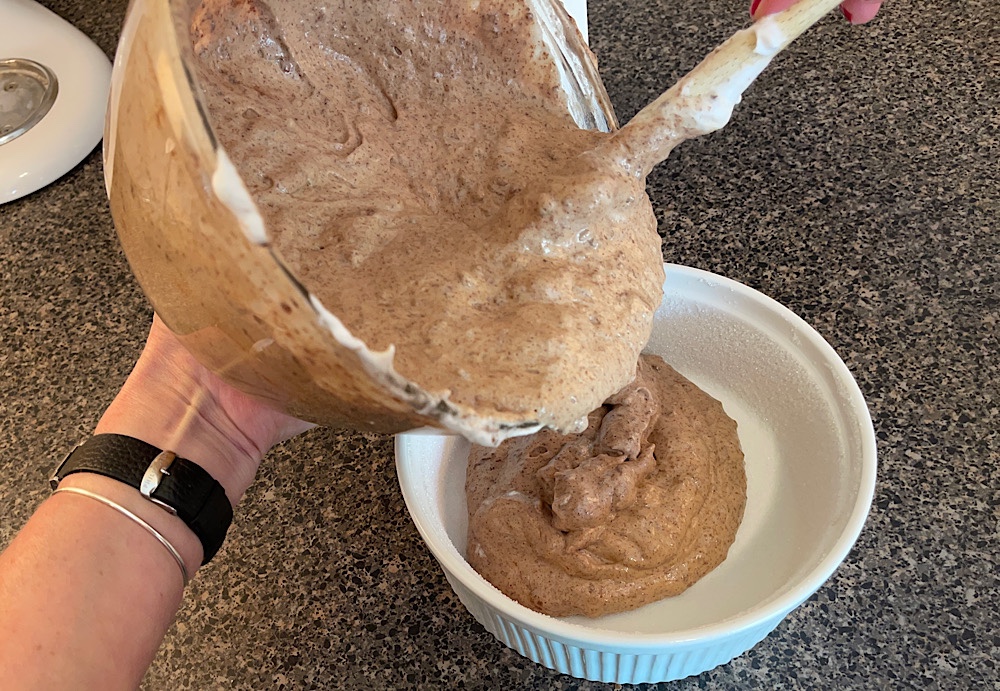 When everything was nice and combined, I poured the batter into my sugared soufflé dish. 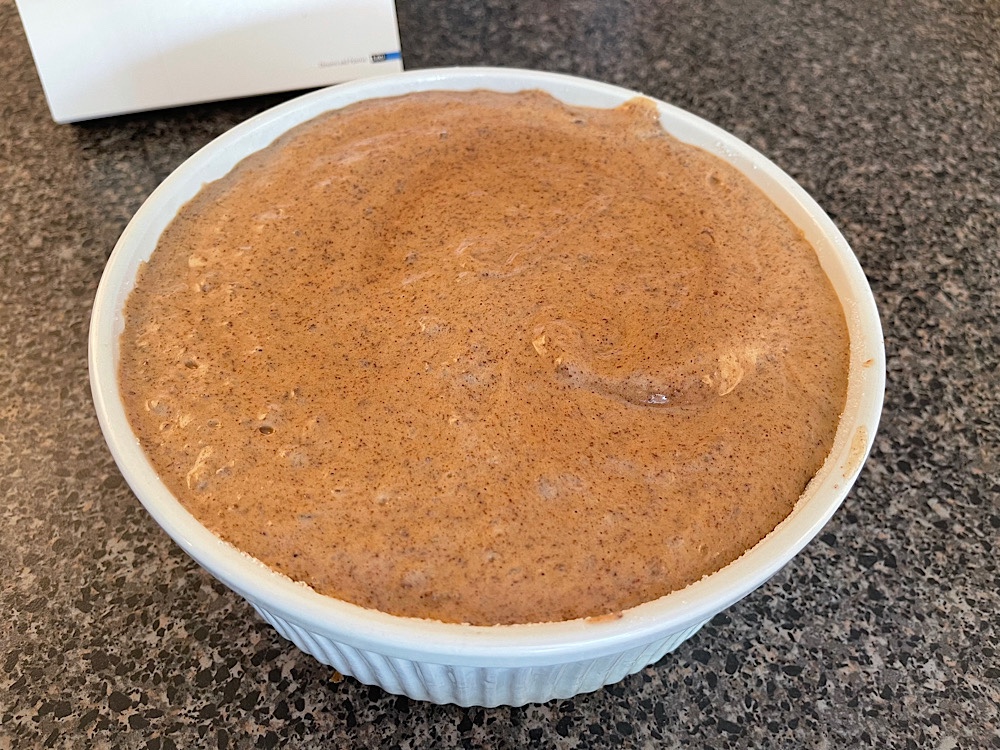 The recipe says that the batter should fill the dish to 3/4 of the way full, but as you can see in the picture above, it was all the way to the top. And I decided not to reserve any batter. I poured it all in there. I guess I wanted to live dangerously. 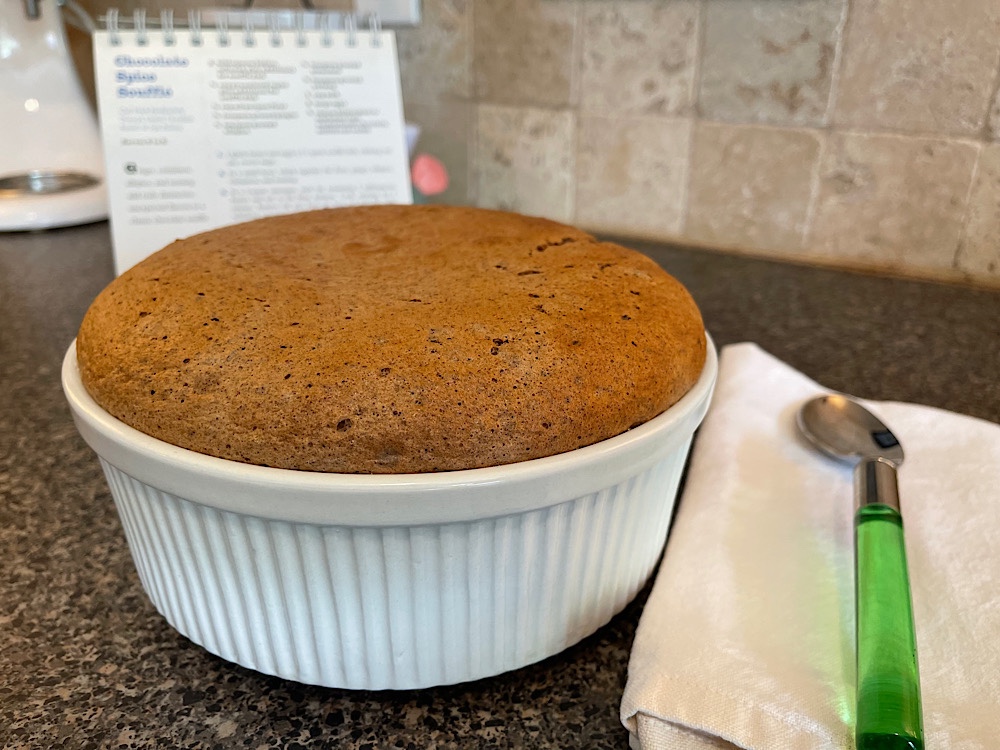 I popped it into a 375° oven and set the timer for 15 minutes. The recipe said it would take between 15 to 20, or until “well risen.” It seemed like a short amount of time to me, but I set a timer anyway. At 15 minutes, the soufflé clearly wasn’t done. At 20 minutes, it was starting to get a bit brown around the edges, so I took it out. I snapped a bunch of pictures, all the while thinking that it seemed much too jiggly. When I stuck a spoon into the top of the soufflé, my fears were fully realized: that soufflé was nowhere near done. Darn you, Cooking with Mickey. You did it again.

At this point, I referred back to last year’s Victoria and Albert’s Chocolate Soufflé Saturday Snacks article. The recipe for V & A’s soufflé asks for us to use a typical water bath in order to bake the soufflé, and put the cooking time right at 45 minutes. 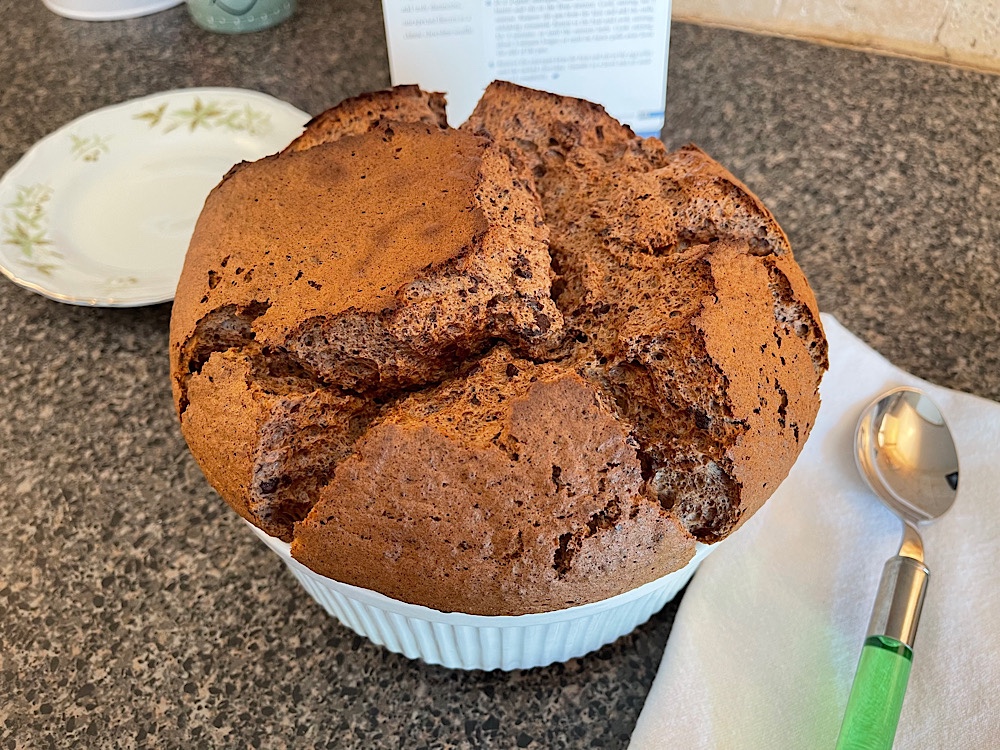 What was a slightly frustrating but fully expected moment melted away when the soufflé emerged from the oven. While the surface was cracked, the height was what it needed to be. And it smelled amazing. And you know what? Who cares what it looks like. Yes, you’d like a soufflé to look like a soufflé if you’re putting all the effort into it. I get that. I’m right there with you. However, when you have to back up and punt like this, who cares what it looks like? Let’s talk about how it tastes. 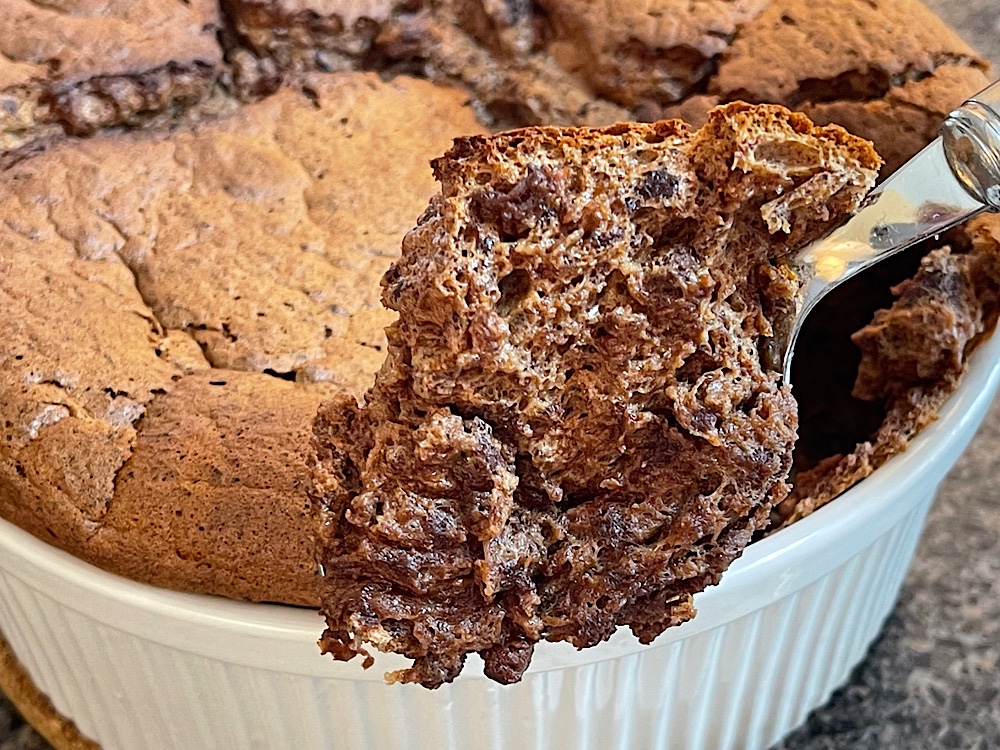 That soufflé? Delicious. The warm spices gave everything a comforting, somewhat autumnal feel. And even though it’s March and nowhere near fall, I loved it. I welcomed it. And dare I say, I needed it. 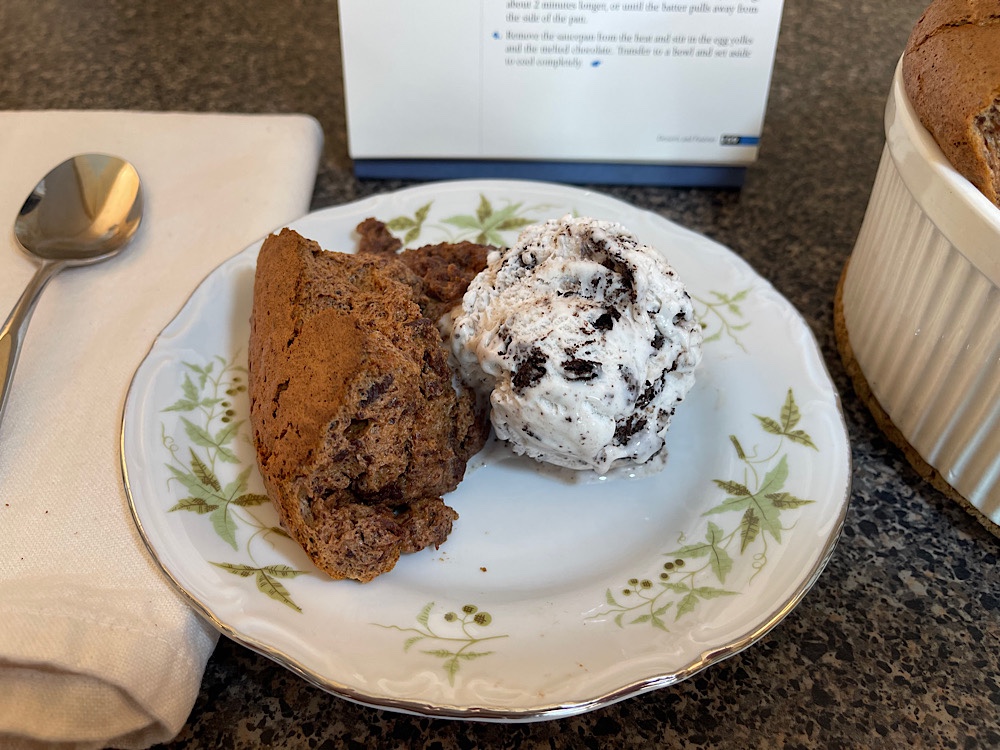 I scooped myself a generous helping of the soufflé and paired it with Cookies and Cream ice cream. It seemed like the right thing to do. 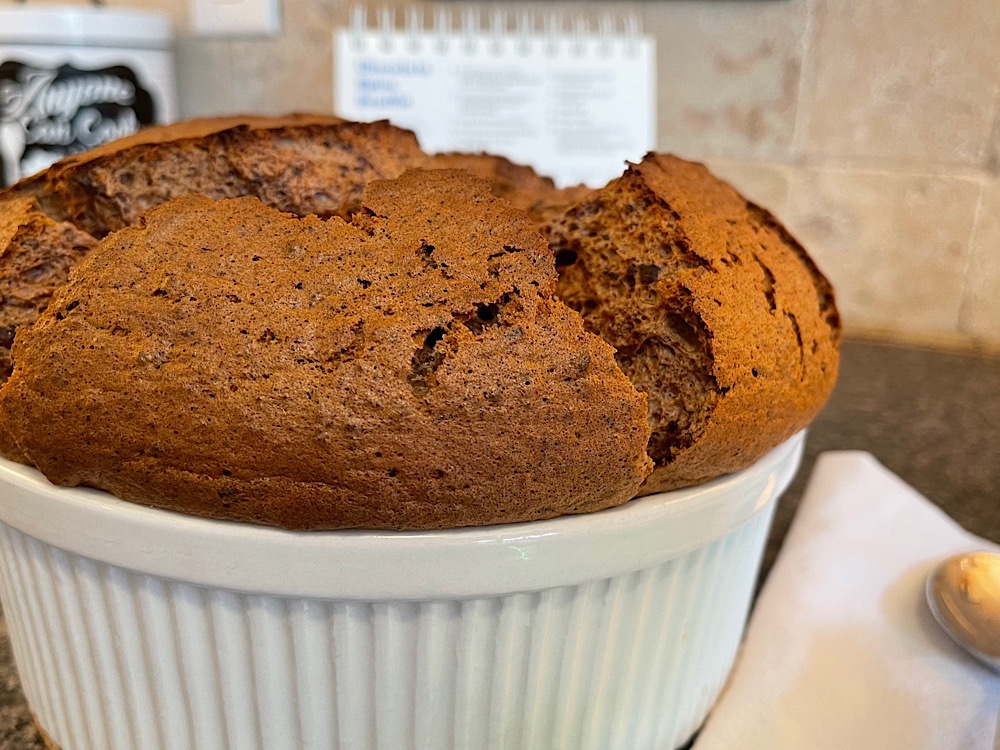 Rich and chocolatey and deep in flavor with a toasty exterior, the soufflé was lovely. Chef Erich, while the baking times were slightly off, got this one right. 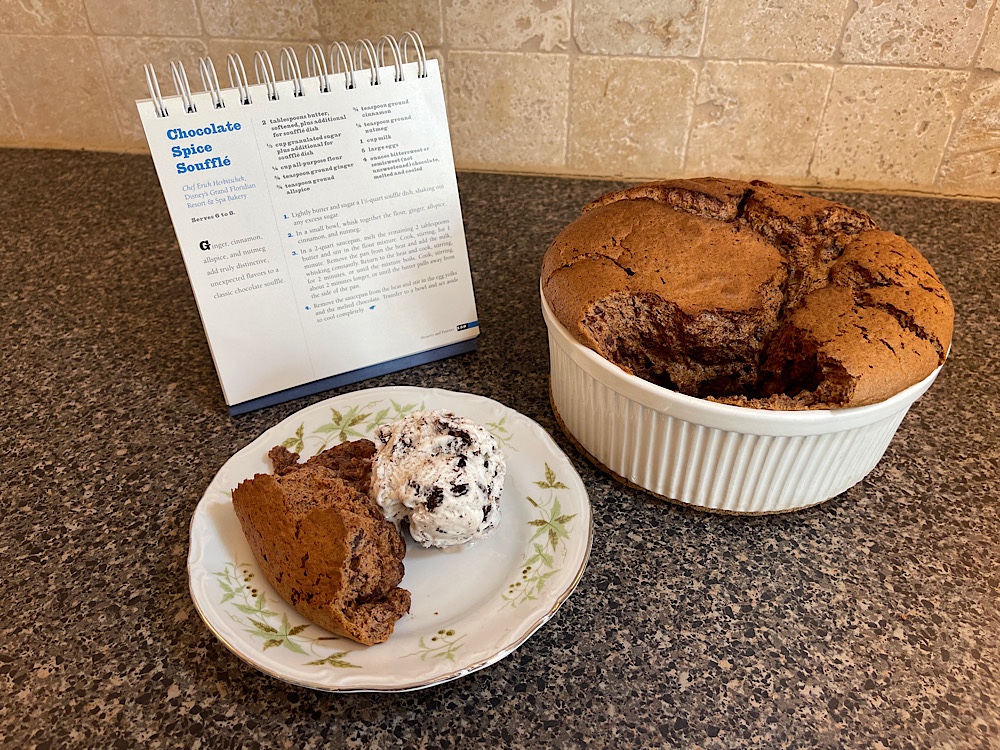 If you give this recipe a shot, I recommend skipping the whole 15 to 20 minute nonsense. Set that timer for 40 minutes and keep an eye on it, of course. And gather your friends and family around. Or simply snap a picture for the ‘gram. Either way, enjoy every bite.

Next Saturday is a big one around the Saturday Snacks side of town. It’s our 100th recipe, and I feel like celebrating. I hope that you’ll be able to stop by.

Thanks so much for giving this a read. I can’t thank you enough. I hope that your weekend is a wonderful one. Me? I think I’ll put Cooking with Mickey back in timeout in the cabinet. I’m sure I’ll eventually pull it back out when I’m really desperate. Ahem.

Ready to try your hand at the Grand Floridian’s Chocolate Spice Soufflé? The recipe is below: