Rest in peace, yeast. I hardly knew ye. Good morning, friends. I’m in the middle of a moment of silence for my first batch of beignet dough. You see, with one swift blow (or one swift pour of boiling water), I killed the yeast, or at least I thought I did. I threw the first batch of dough for today’s beignets into the trash. But I digress. There’s hope on the horizon. Let’s back things up to the beginning.

Disney declared this past week to be World Princess Week throughout the parks and resorts, and to celebrate Tiana, they released the recipe for Tiana’s New Orleans Beignets. I was going to approach today’s Saturday Snacks article using her recipe (I mean, who doesn’t love Tiana?) until I dug a little deeper and discovered that Tiana’s recipe was actually a re-release of an older recipe. And the older recipe? Well, it’s none other than the classic recipe from Disney’s Port Orleans Resort – French Quarter. While I’ve made beignets using a choux pastry recipe in the past, I’ve never gone the yeast-based route that French Quarter’s recipe utilizes. Today’s the day!

In the spring of 1988, my dad had a work conference scheduled in New Orleans. Since the conference coincided perfectly with Spring Break, the trip became an adventure for the whole family. My mom, my dad, my little sister and I stayed in the French Quarter and spent afternoons and evenings exploring the magic that is New Orleans. One of the stops on our adventures had us gobbling up fresh beignets by the river at Café du Monde. Those beignets? They had me at hello.

Port Orleans Resort – French Quarter’s version of the beignet recipe includes a few very important additional details that Tiana’s version doesn’t. We’re told what temp the warm water should be and how long the yeast mixture should hang out before you use it, and we’re told to let the dough rise for a possible fewer 30 minutes. Tiana, we love you, but we’ll be leaning on the added details found in French Quarter’s recipe today. Here goes nothing. 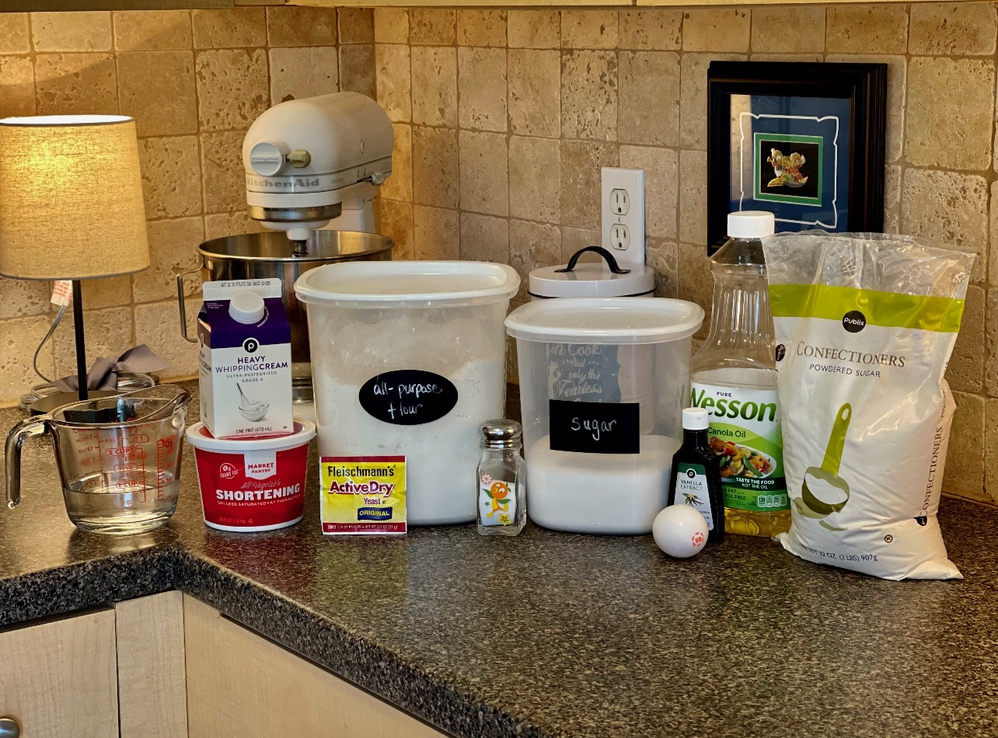 There’s nothing over-the-top on the list of ingredients for French Quarter’s beignets, and I thankfully had everything on hand and was ready to go in just minutes. 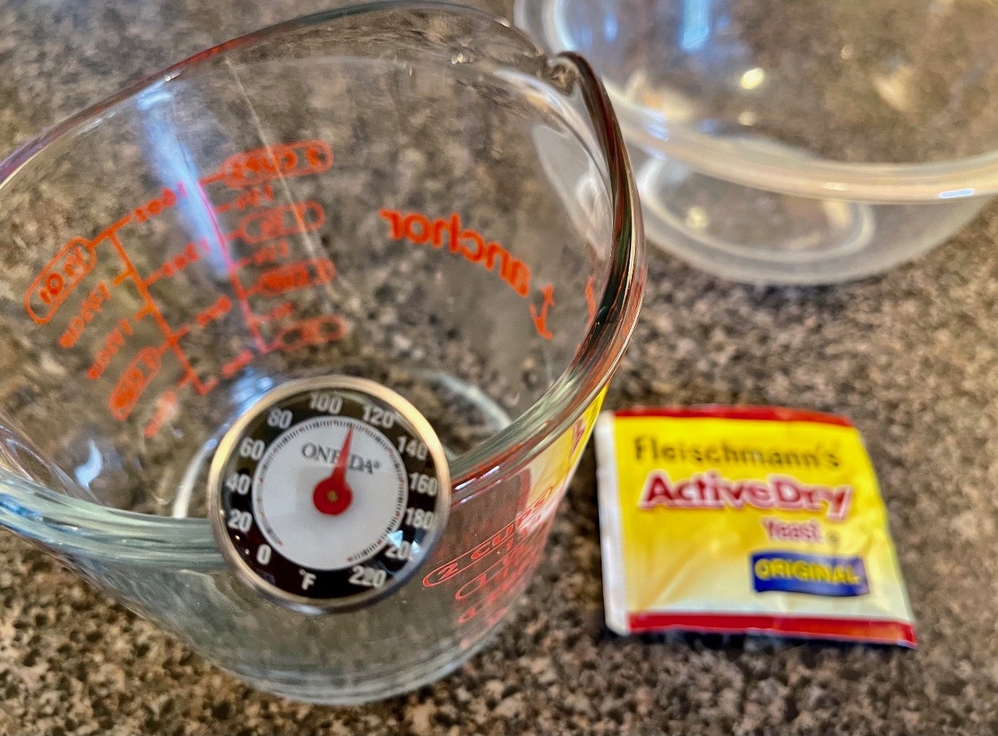 We begin today’s recipe by dissolving 1/2 teaspoon of dry yeast in 1/4 cup of warm water. As I’ve learned the hard way, when a recipe says warm, it really means between 100-110 degrees. French Quarter’s recipe goes a step further and asks us to make sure that the water is 105 degrees. I double checked the water’s temp, poured it into a bowl, and sprinkled the yeast on top of the water. 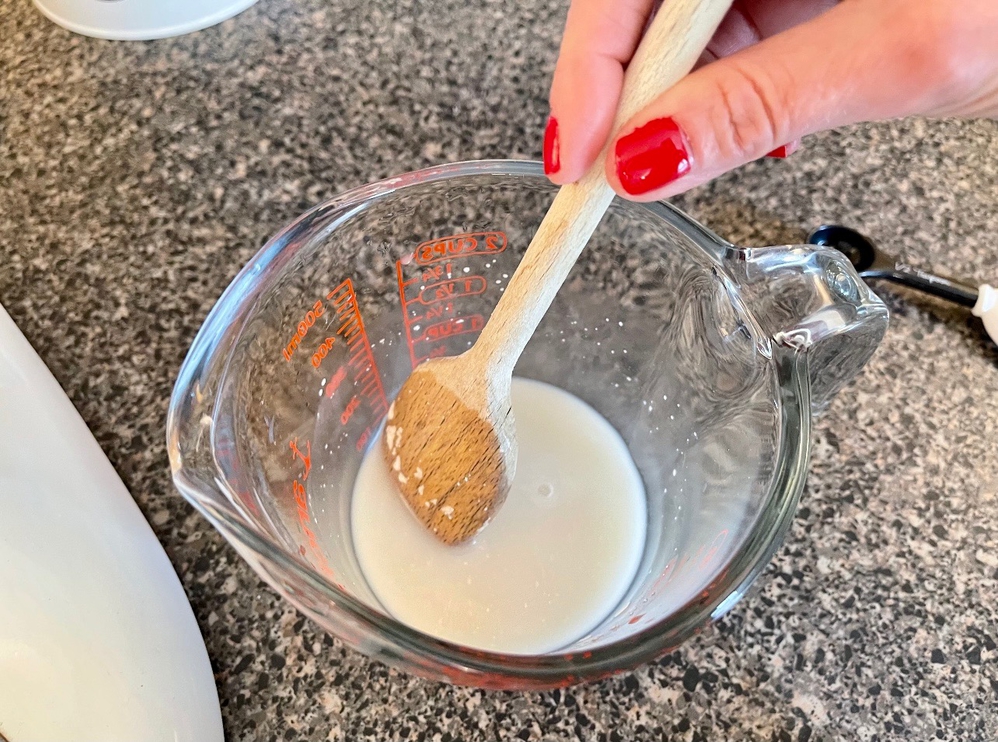 The first time ’round (the batch that ended up in the trash), I whisked the yeast to dissolve it. I stuck with a kinder, gentler spoon for the second batch.

While the yeast is proofing for its required 5 minutes, we’re to throw the next 7 ingredients in a large bowl. Ultimately, the mixture gets transferred into the bowl of a stand mixer that’s been outfitted with a dough hook attachment (something that Tiana’s recipe doesn’t have us do), so if you’d like to save a step (and a dirty bowl), just throw everything into that stand mixer bowl. 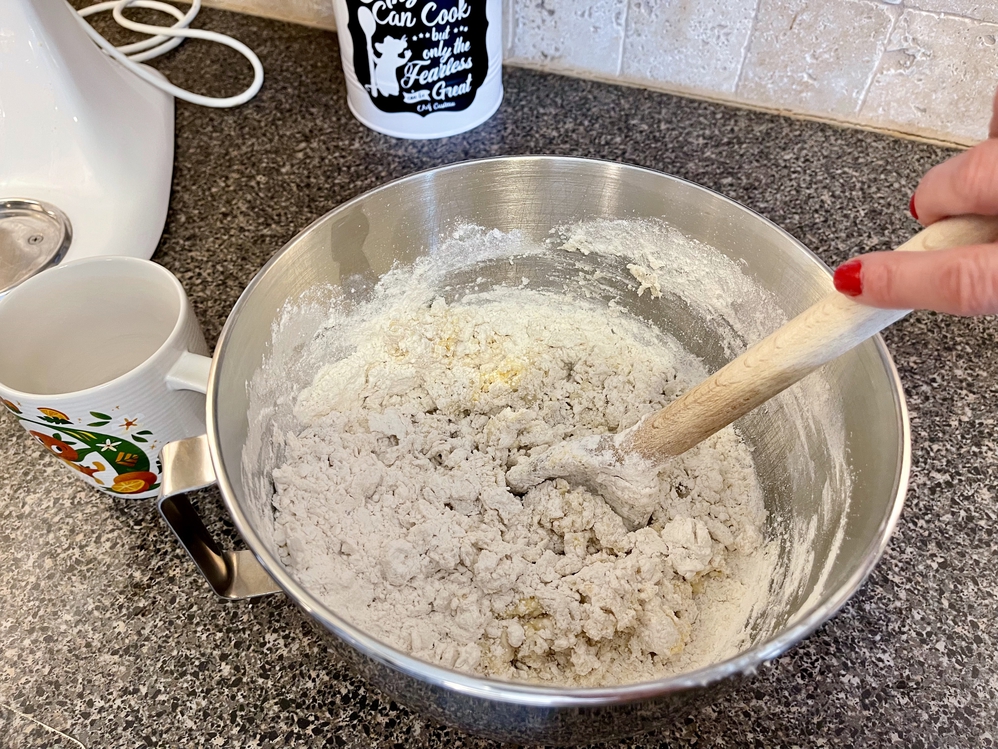 Into the bowl went 1/4 cup of granulated sugar, 2 tablespoons of vegetable shortening, 1/2 teaspoon of salt, 1/2 cup of heavy cream, 1 egg, and 4 cups of all-purpose flour. The recipe asks that we then pour in a 1/2 cup of boiling water, combine all of the above, and then add in the yeast mixture. The first time around, I, unfortunately, did not do that. I zapped the 1/2 cup of water in the microwave, added the yeast mixture, and then added the hot, boiling water. Whoops.

I turned the mixer on and mixed the dough until it was just combined and as smooth as I could get it. I placed a kitchen towel over the bowl and let it rest for 30 minutes in a warm spot as directed.

After 30 minutes, I came back to find the same lump of dough sitting in the bottom of that bowl. Nothing had happened, and I had it in my head that something should have. Never mind the fact that dough takes an hour or two to rise, not just 30 minutes, but I thought that I had killed the yeast (which is likely since I poured the boiling water in after the yeast), so into the trash went the dough. 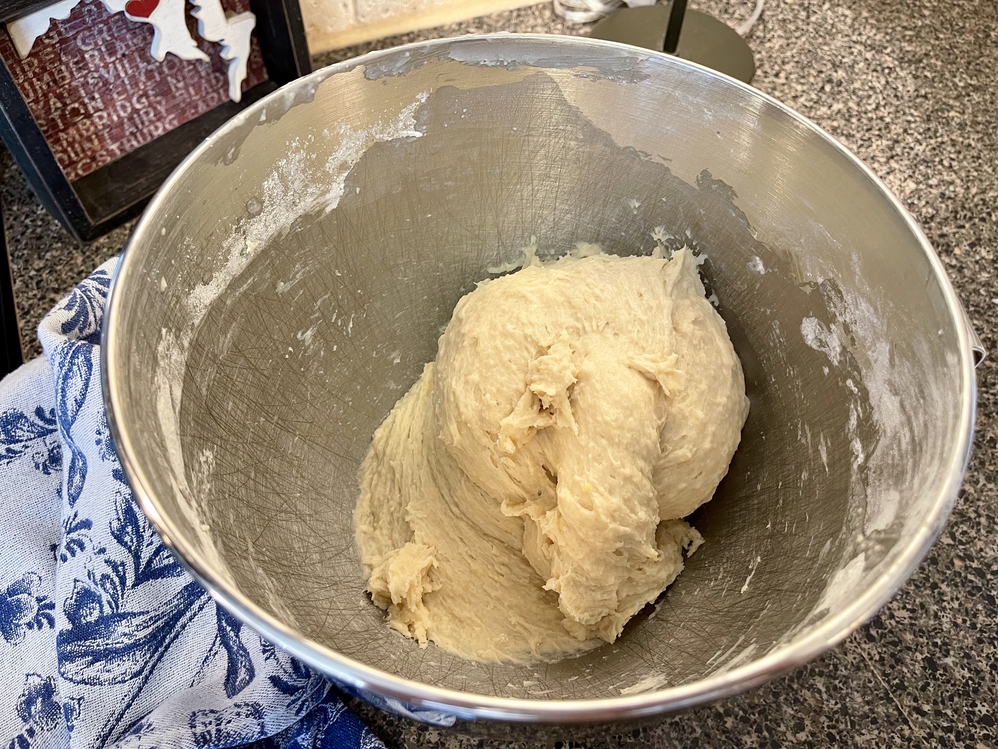 I began again and motored right through the steps, making sure to pour in the boiling water and combining the ingredients before adding in the yeast mixture. I got things going in the mixer with the dough hook and, once the dough was smooth, I covered it up for its 30-minute nap. 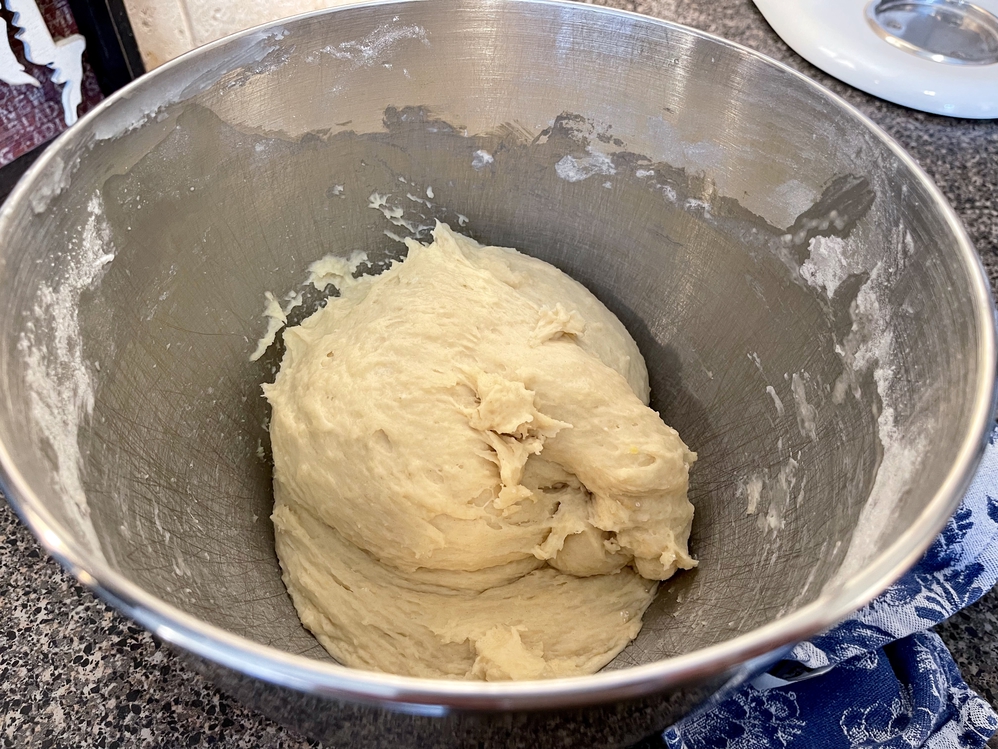 After 30 minutes, though nothing miraculous had occurred, I determined that this was okay, and turned the dough out onto my flour-covered counter. Looking back now, the dough is definitely smoother than the first batch and just looks better all the way around. 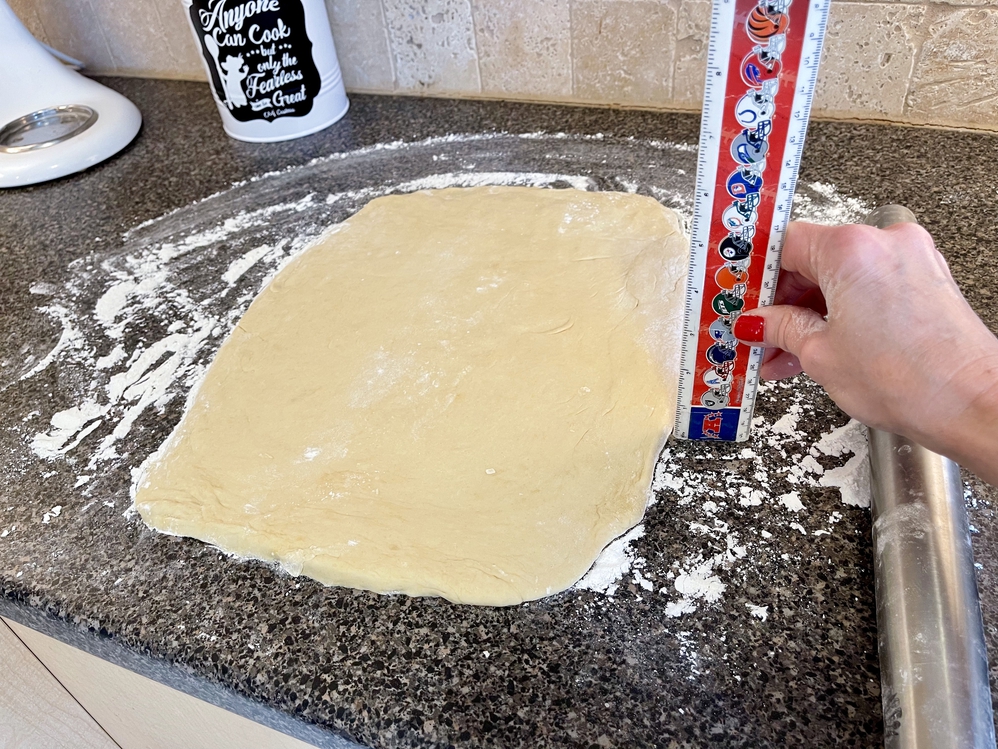 The recipe asks that we roll the dough out to 1/4-inch thickness, so I grabbed my trusty 1996 AFC ruler and my rolling pin (floured to encourage the dough not to stick), and made sure that the dough was where it needed to be. 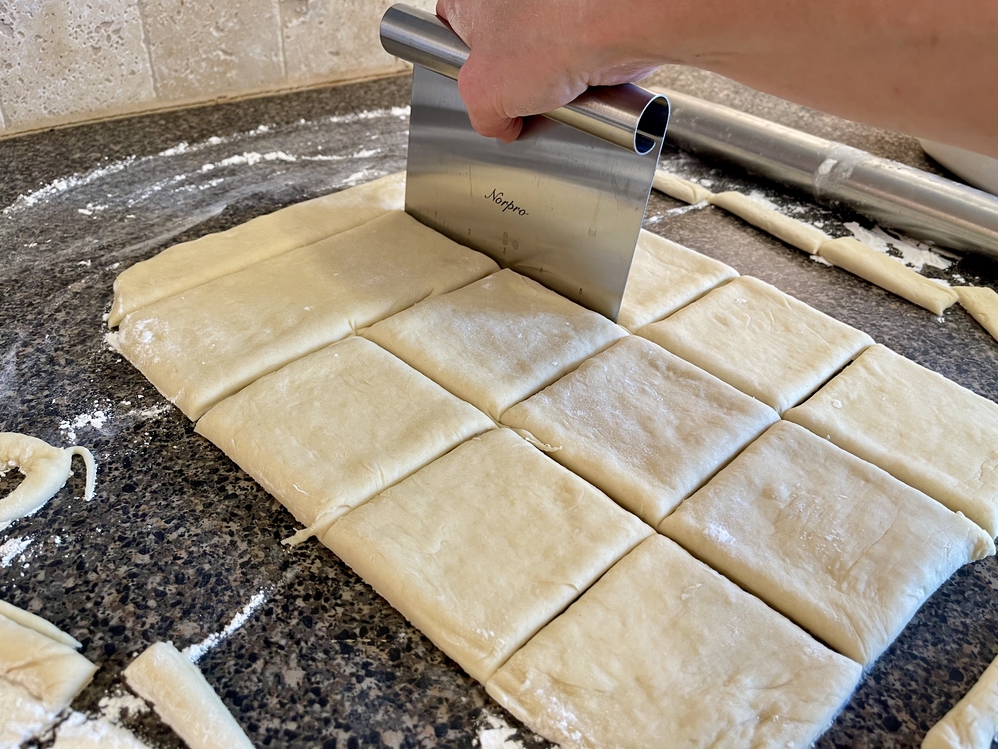 Once the thickness was correct, I grabbed my recently-purchased pastry cutter, which by the way, is another kitchen tool that I wish I had picked up years ago. It has a million uses and I feel so professional (lol) when I use it. I cut the dough into approximate 2×3 inch rectangles, cut off the edges so they were straight (we’re professionals, remember…ahem) and covered the dough squares with my kitchen towel for another nap. 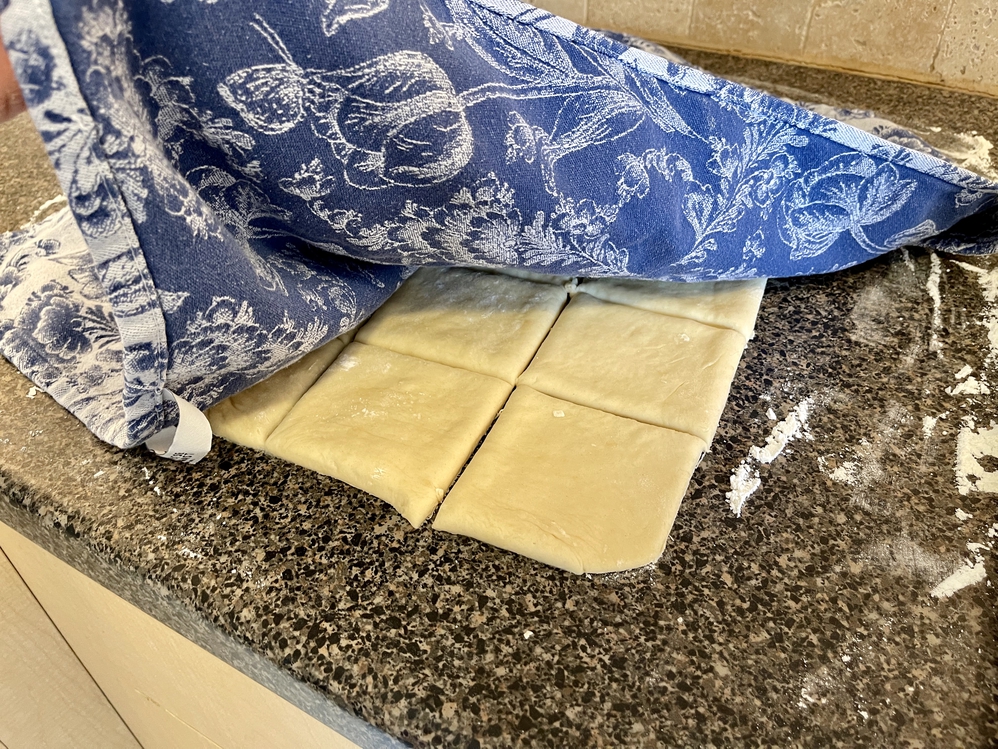 And here’s another slight difference between the two recipes: Tiana’s calls for us to allow the dough to rise for 2 hours, and French Quarter’s thinks it should take 1 to 1 1/2 hours. I decided to set the timer for an hour and a half and then ended up tacked another 30 minutes or so on the end. The dough is supposed to rise to double in size. When the 2 hours was up and I took a look at the dough, I had to remind myself that “doubled in size” would only be half of an inch. 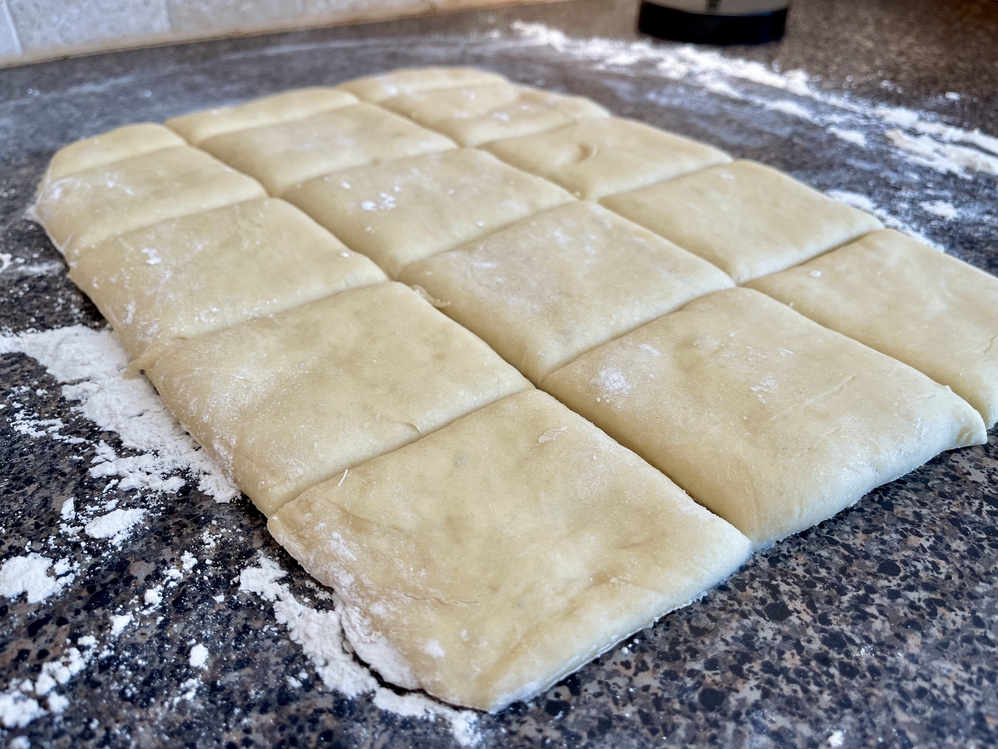 I patted the dough down gently like the recipe instructed, and poured the vegetable oil into a pan. The dough was firm, and I knew it was what it needed to be. Cue the excitement. This just *might* work.  “We’re almost there…” 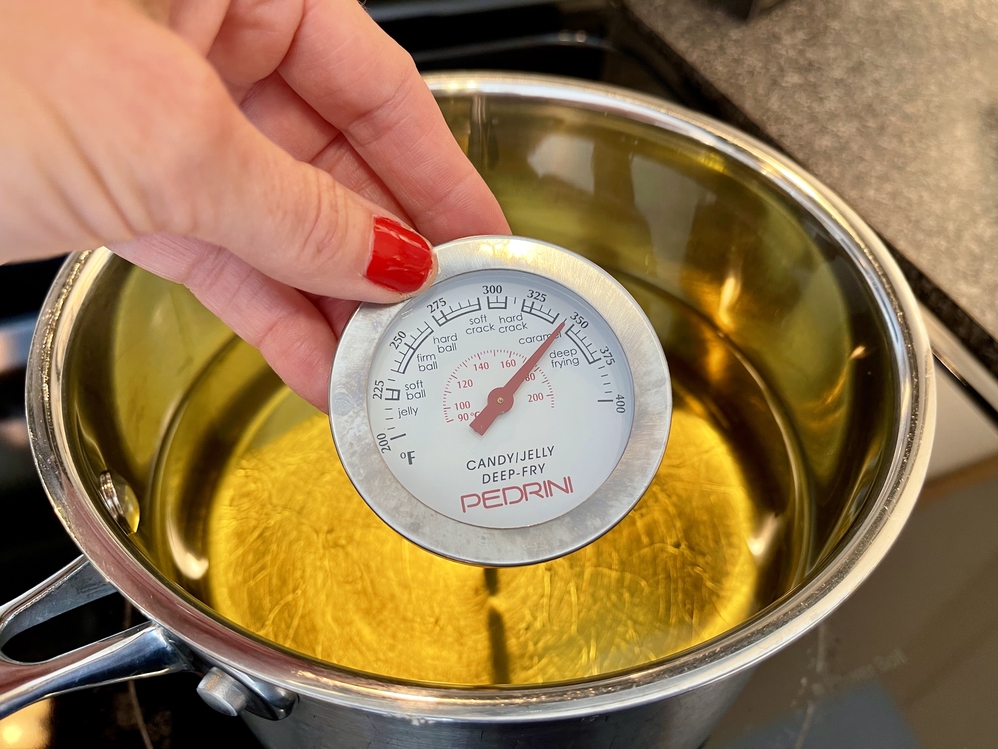 I had decided that I wasn’t going to use my biggest pot and have a crazy amount of oil to get rid of after the beignets were done, so I grabbed my large saucepan and poured in enough oil to have roughly 2 inches of oil in the pan like the recipe suggests. I did a fair amount of research before attempting to heat the oil so that I could hopefully avoid the Scalding Hot Oil that Never Stops Getting Even Hotter event of 2021 (aka making Pongu Lumpia). The recipe asks that we heat the oil over medium heat, and I played it just shy of that. I knew from my research that low and slow would be best, so I tried to muster as much patience as I could (we’ve come this far; we can have just a bit of additional patience, right?) and eventually the oil reached 350 degrees. 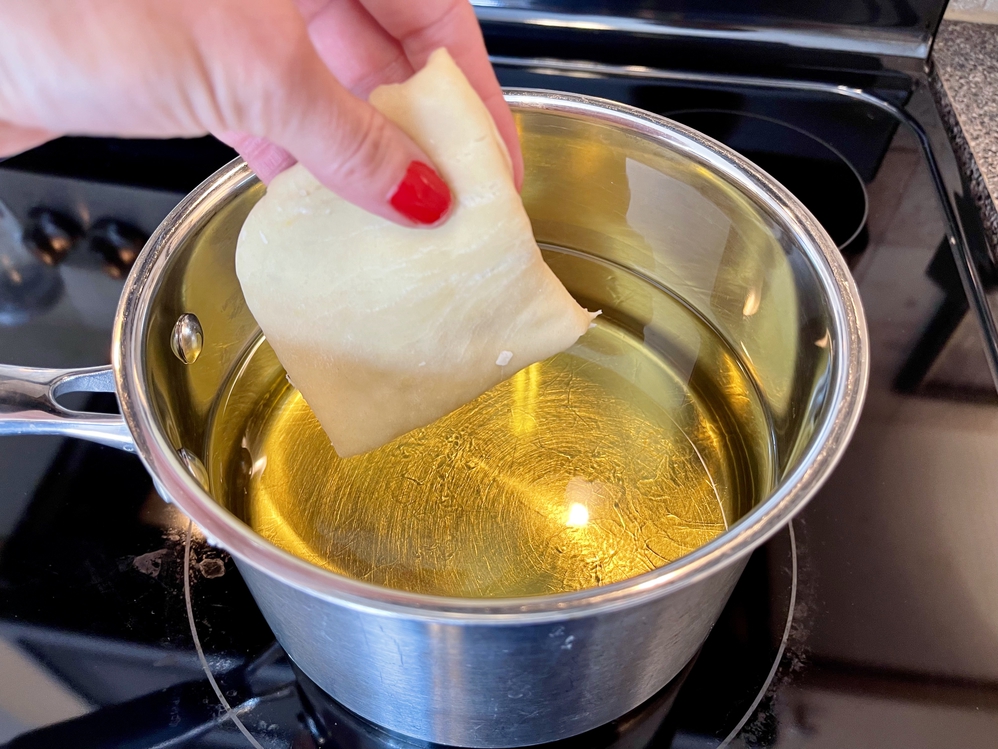 As soon as the dial hit 350 degrees, I dropped the first rectangle of dough into the oil. I then dropped in a second and tried to separate them as best I could with my skimmer. 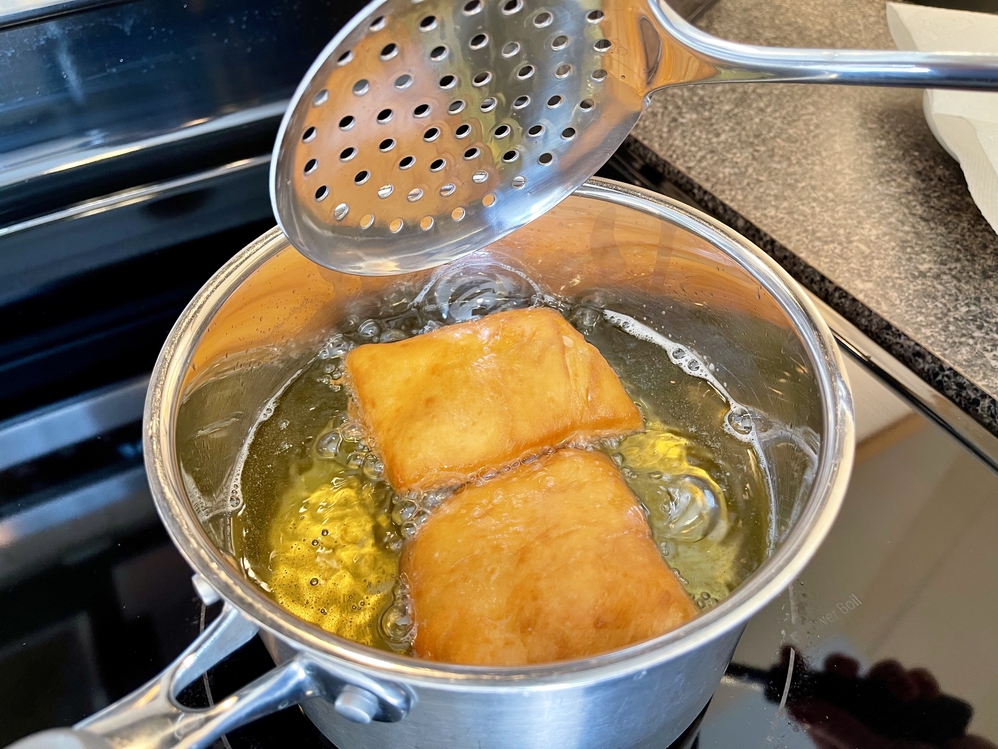 Once the beignets were golden brown on the first side, I flipped them over to allow the other side to do the same. Don’t leave your stove because the whole process takes just a couple of minutes. Once the beignets were golden and toasty, I pulled them out of the oil and placed them on a paper towel-lined baking sheet to drain. It’s at this point that you and I can do a little a happy dance ‘cause IT’S HAPPENING. HOMEMADE BEIGNETS ARE HAPPENING!

I continued the process of dropping two pieces of dough into the oil at a time and I turned the heat down slightly and then back up as needed. There was no way that I was letting the temp of the oil get out of hand again. Those beignets had to be protected, and I was determined to keep the upper hand. 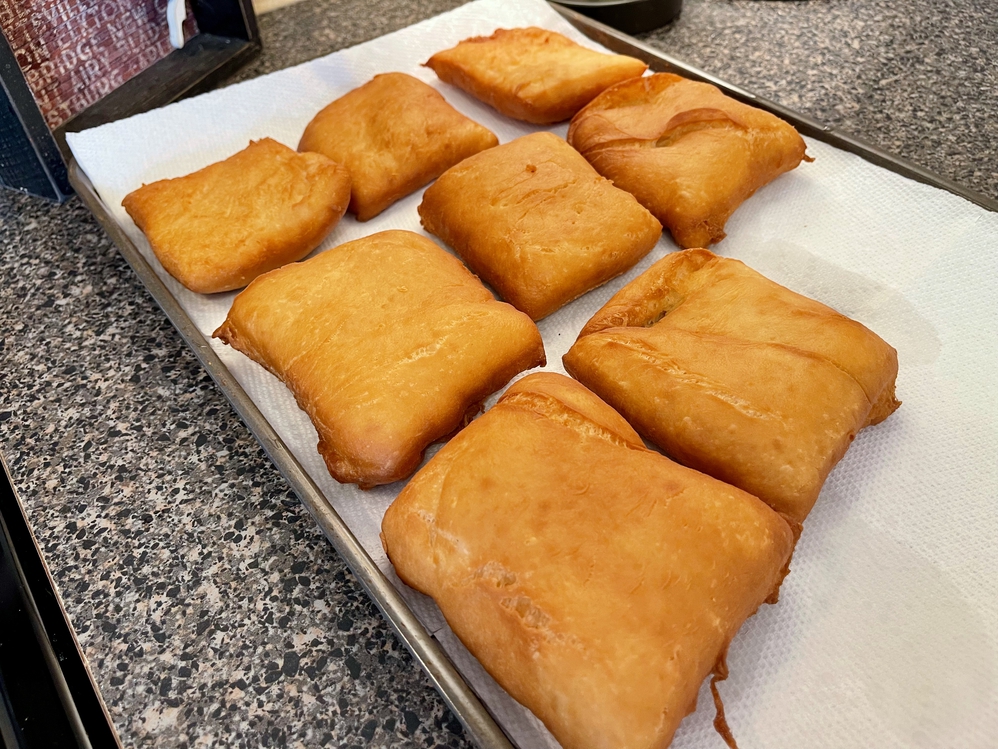 Thankfully, the oil did just what I wanted and every single beignet came out of that oil looking mighty fine. 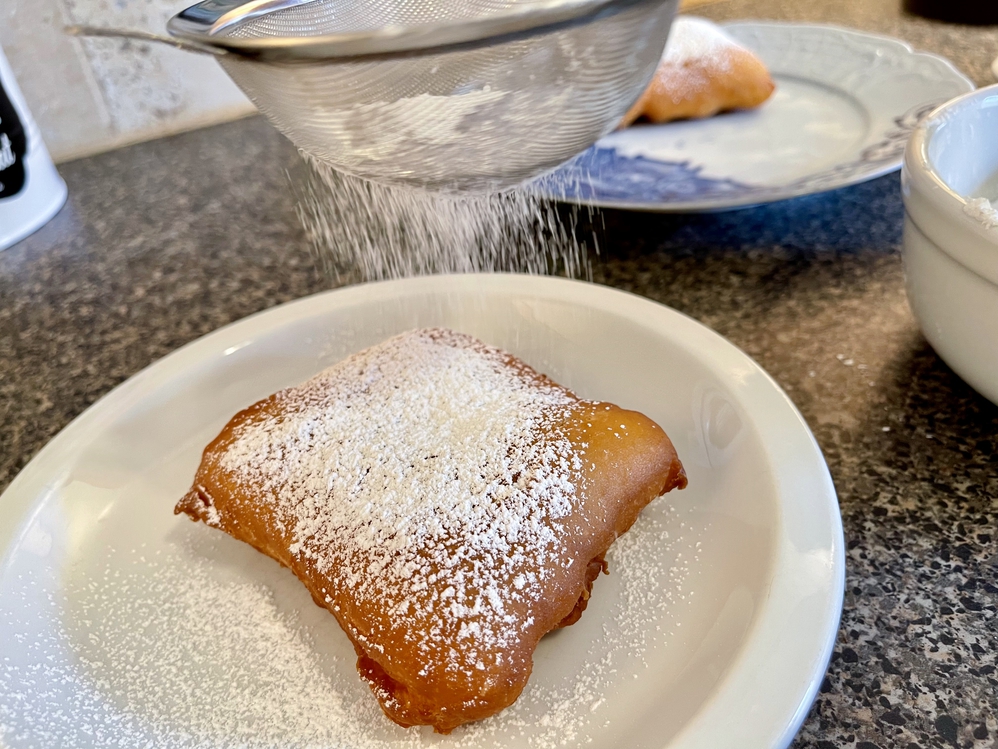 After giving them time to drain, I gave them a generous sprinkling of powdered sugar and stood back to admire what I’d done.

Yes, I’ve made beignets before, but that was a completely different method, and this is Port Orleans Resort – French Quarter’s recipe. This is special. 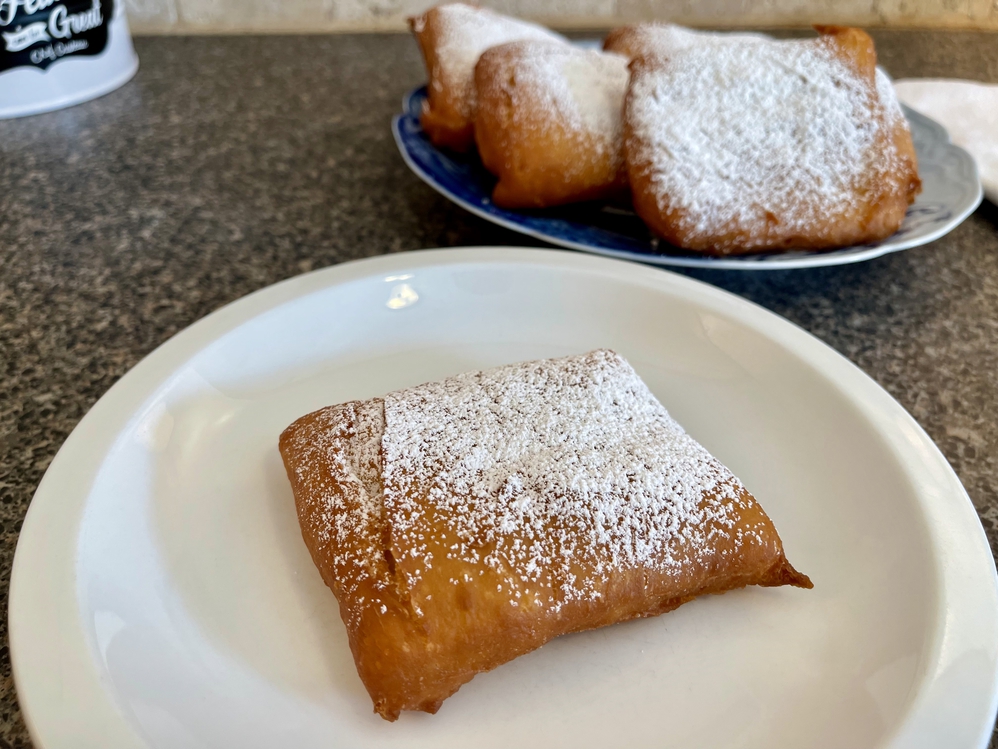 Friends, these beignets? BEHOLD. The first bite of these scrumptious little things was a hallelujah moment in my kitchen. I quickly ushered my husband into the kitchen so that he too could behold their amazingness. Disney snack success like this has to be shared, after all. We were two very happy campers. 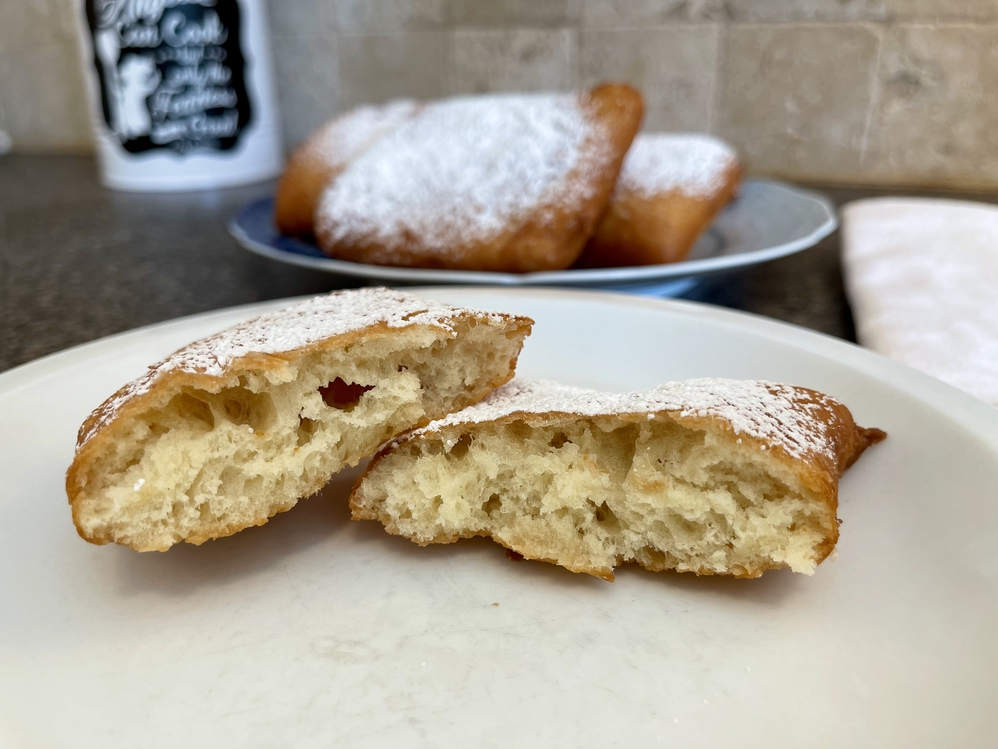 The beignets were just what you’d want them to be: toasty on the outside and light and soft with air pockets throughout on the inside. The layer of powdered sugar gave them a delightful sweetness, and my goodness, but please pour yourself a cup of coffee and savor them. The beignets are best warm after just a few minutes out of the oil. And they are the perfect thing to grace a weekend morning. We only need special snacks on the weekend, and these beignets definitely fit into that category.

I can’t wait to step foot into Port Orleans – French Quarter for a cup of chicory coffee and a beignet after the resort reopens on October 28th. In the meantime, you and I can savor a taste of the resort in our very own kitchens.

Thank you so much for stopping by and reading! I hope that your weekend is incredible from start to finish!

Ready to give Port Orleans – French Quarter’s beignets a whirl? The recipe is below: