Friends, I was given an assignment and I chose to accept it. The mission was to show up at a Disney Vacation Club resort and create three Saturday Snacks recipes in one afternoon using the setup and, for the most part, only the utensils and kitchen gadgets included in the villa. This Saturday Snacks mission was given to me by Pete, and was to be in collaboration with DVC Fan. I thought and chewed on it, did a little planning, and accepted. We here at Saturday Snacks can do just about anything, right?

I pored over my cookbooks and chose recipes that wouldn’t call for me to use my stand mixer (not hauling that to Old Key West Resort, that’s for sure) or items that the villa might not have. The first of the three recipes? Napa Rose’s Wine Country Wild Berry Cobbler from Chef Mickey: Treasures from the Vault & Delicious New Favorites. We’re again swinging for the fences by going with a classic from this beloved Grand Californian Hotel restaurant, but it fit the bill as far as using simple items, and I knew that we could do it. 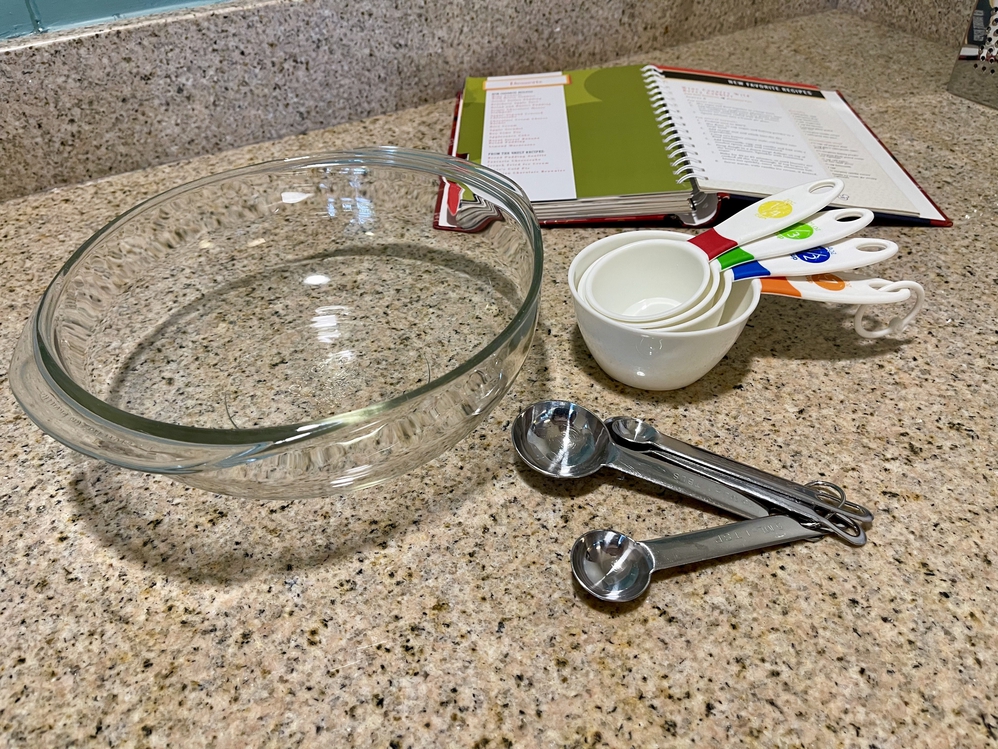 First things first: let me start by saying that I did actually take two kitchen items with me: my set of measuring spoons and my set of measuring cups. I wasn’t 100% sure that the villa would have them, and I wasn’t about to show up without them. And, to be honest, when I was standing there in that villa trying to process what I needed to do in order to pull off three recipes in the span of 4 hours (plus taking pics, filming videos, and washing items in between), a wave of THIS IS IMPOSSIBLE came over me. Believe it or not, having those little cups and spoons brought me comfort and eased my anxiousness. They were something familiar in the midst of an unfamiliar environment, and I was so glad that I had tossed them into my bag. If you’re headed down to stay in a DVC villa, those two familiar items are small enough to pack in your suitcase with your Mickey ears. A stand mixer? Not so much. 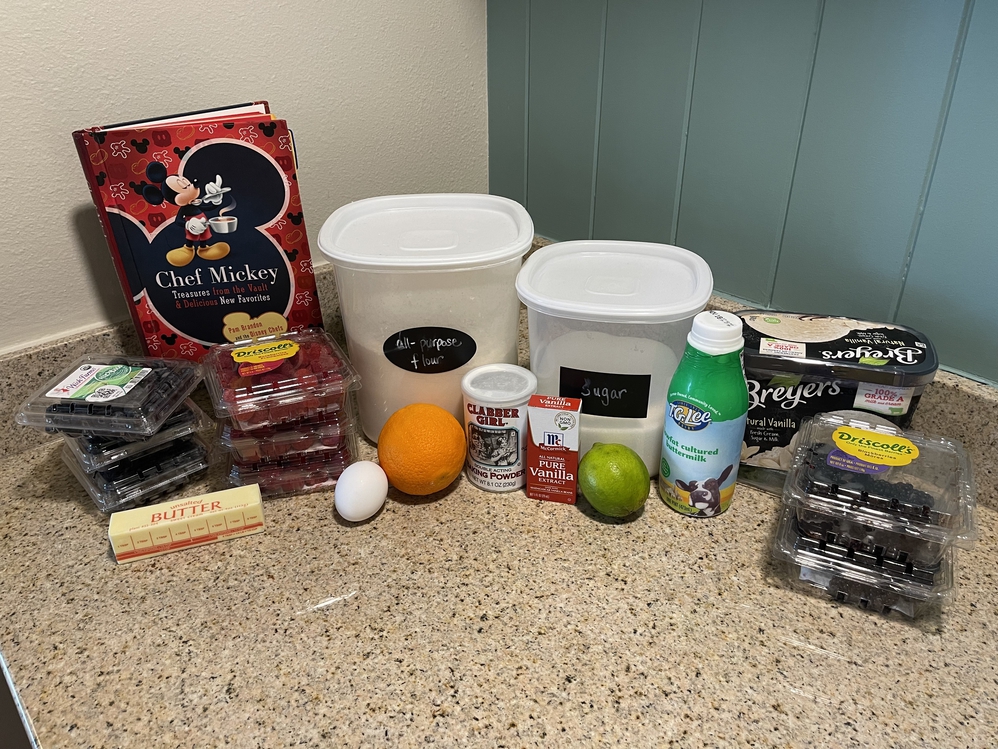 All of the ingredients were readily accessible via Instacart. I normally do the Saturday Snacks shopping myself, but this week’s jam-packed schedule left me with very little wiggle room. If you’re staying in a villa, a stop on the way by Publix, Walmart or Target or an order with a service like Instacart will allow you to have what you need. While I brought my flour and sugar containers from home, you’d likely pick some up at the store or, like Jackie’s done in the past with her family, measure out and pack pre-portioned baggies filled with the dry goods that you need. How brilliant is that?!

Let me first say that I had to back up and punt right off the bat. The cobbler is to be made in a 9-inch pie plate, and the villa at Old Key West was short one 9-inch pie plate. Sigh. As I quickly opened every single cabinet in the kitchen frantically praying that a pie plate would materialize, I landed on using a 2-liter Pyrex glass bowl. The bowl was ovenproof (check), came close to being 9 inches across (double check), and it would just have to do. If I were in my kitchen, I would have my choice of two pie plates. I guess not many DVC guests are baking pies while at Walt Disney World, so I can’t fault them for not stocking the kitchen with one.

The only drawback to using the Pyrex bowl would be that it is deeper than the pie plate and was not quite a full 9 inches across, which could hinder the baking process of the cobbler’s biscuit topping. I told Fiasco (who was there to film the process for an upcoming vlog about the adventure) about my concerns and kicked things off. It couldn’t be helped, and whatever came out of that villa’s oven would be good enough.

I proceeded to wash 2 cups of fresh raspberries, 2 cups of fresh blueberries, and 1 cup of fresh blackberries. This would’ve been a great time to stop and do a complete mis en place and prep all of the ingredients, but you know me better than that. I just washed those berries and jumped right in. 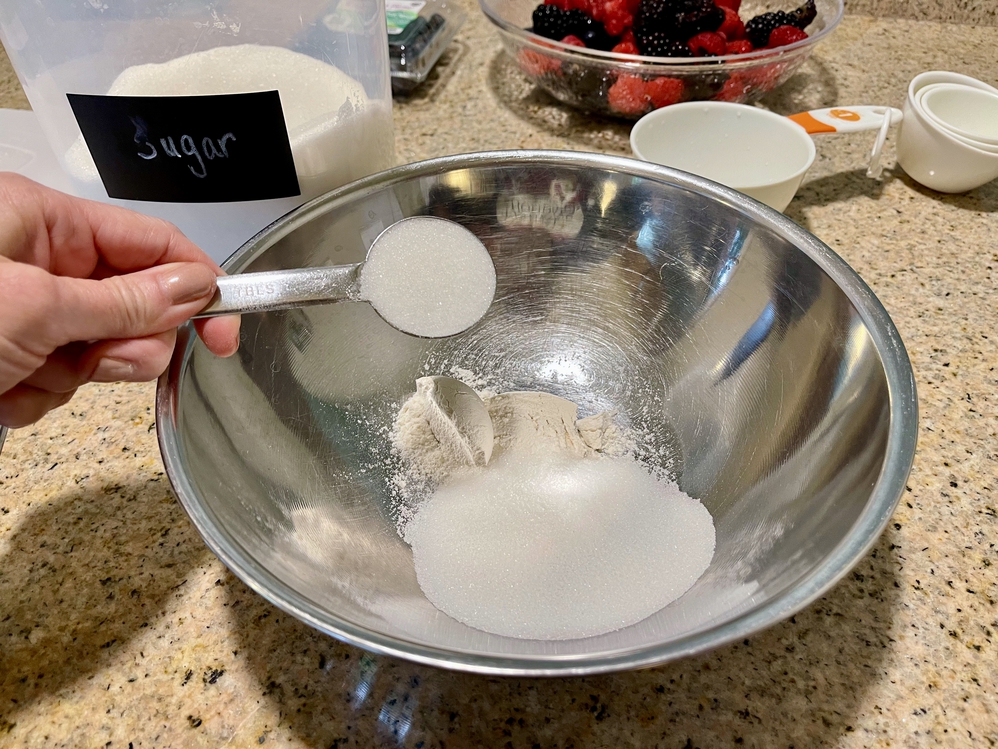 I next combined 6 tablespoons of granulated sugar and 2 tablespoons of flour in a mixing bowl. The recipe calls for you and I to use a large mixing bowl, but the metal bowl in the picture above was the closest I could get to large. And, thankfully, it did the trick. 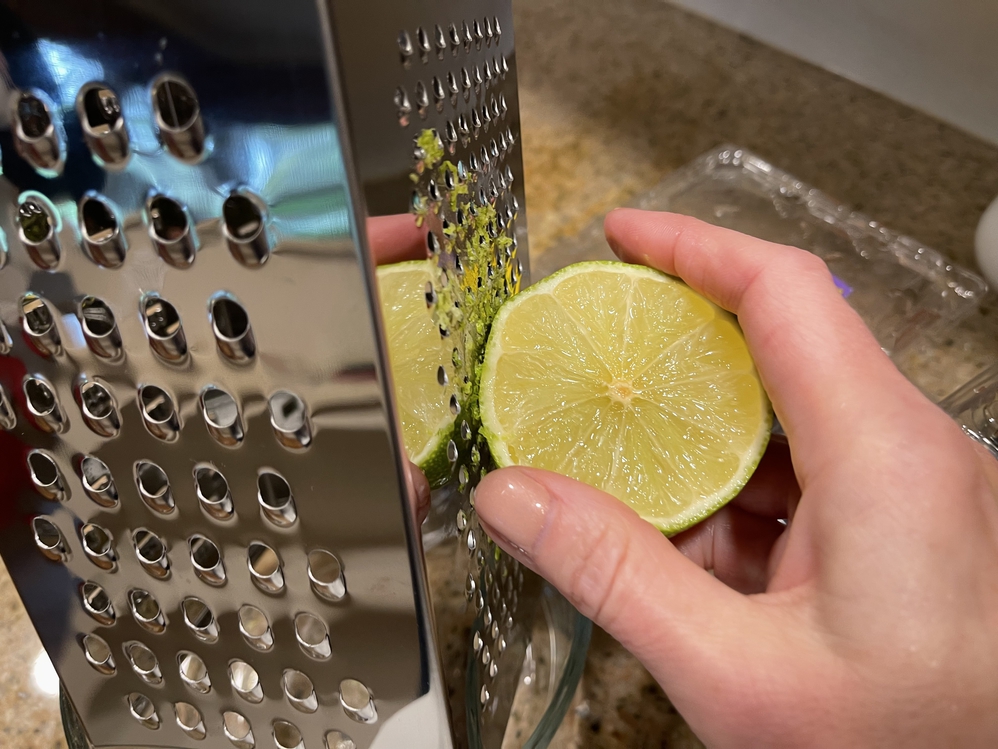 We need 1 tablespoon of lime juice and 1 teaspoon of lime zest for the next step, so I was happy when I spied a box grater in one of the upper cabinets in the villa’s kitchen. Whew. 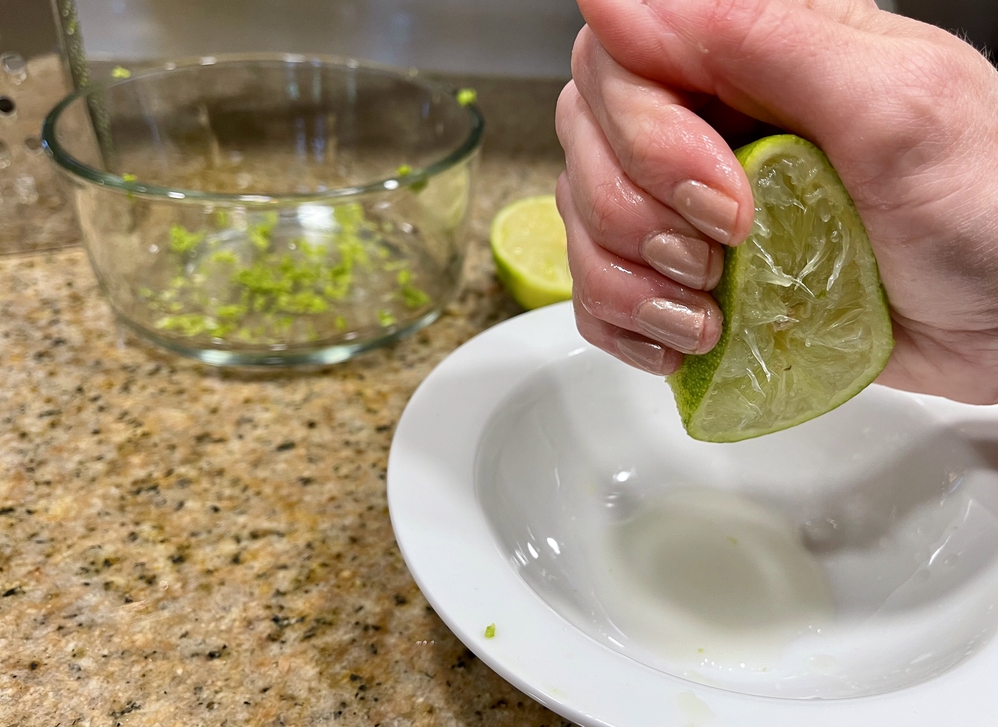 I grated the lime and got a total of just under one teaspoon of zest (close enough, right?) and squeezed that lime by hand. 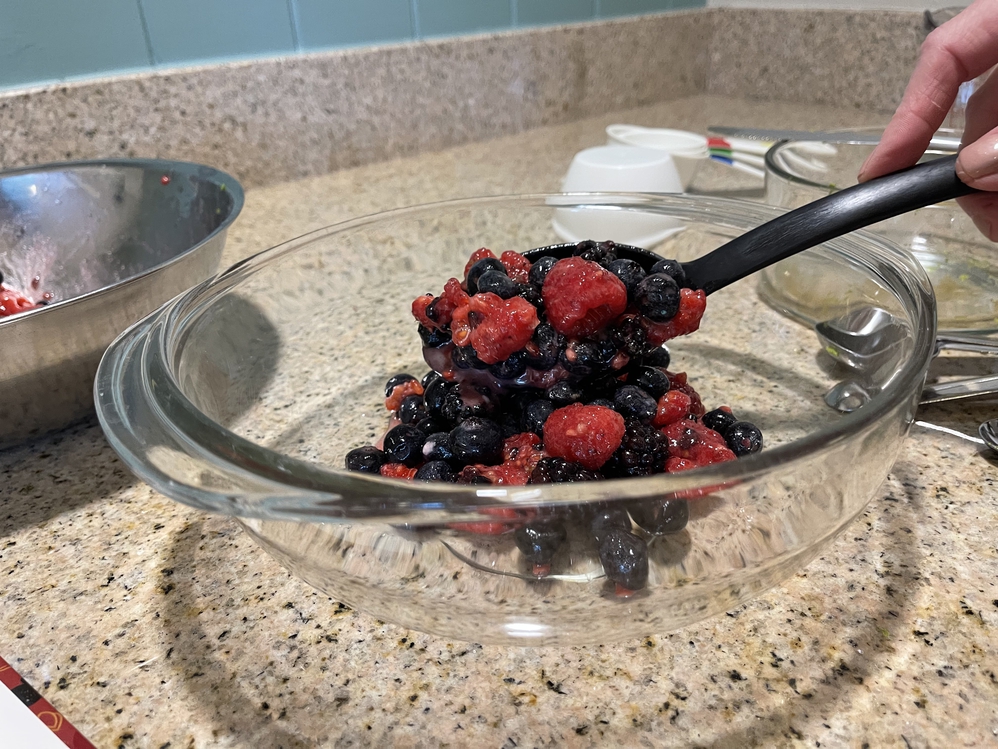 If you’re making this recipe at home, this is the point at which you would pour the berry mixture into a pie plate. If you’re short one pie plate, you can pour the mixture into the next best thing: a Pyrex bowl.

Once the berries were in the bowl, it was time to turn my attention to the cobbler portion of things. We get to make a yummy biscuit topping for the cobbler, and, spoiler alert, I loved the end result. Thank you, Napa Rose chefs. 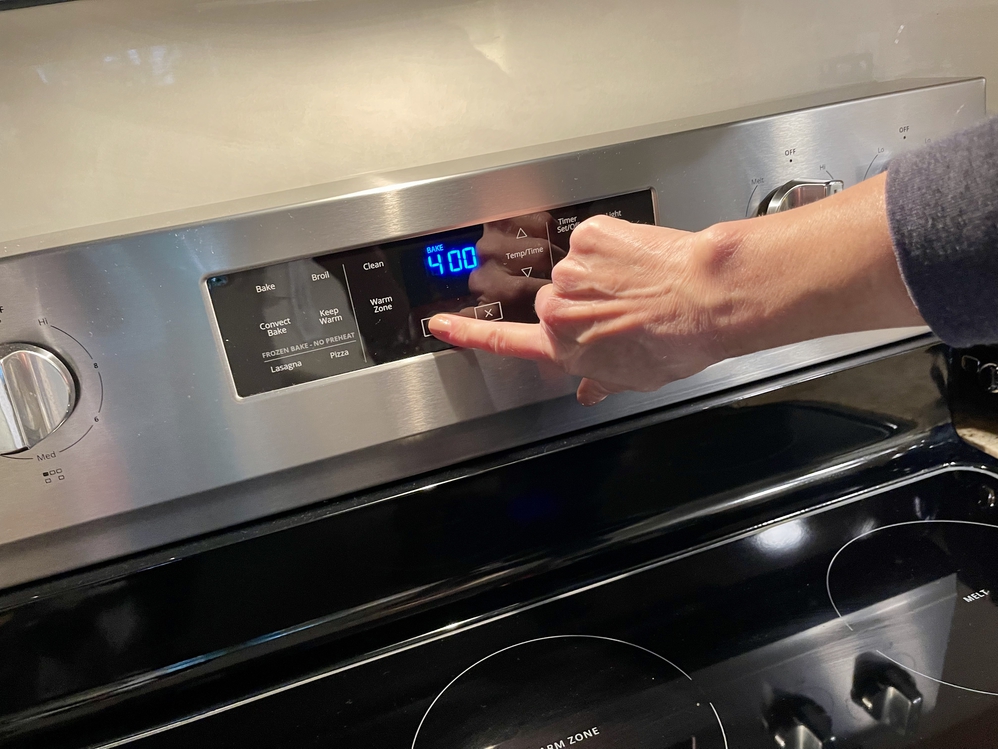 First things first: I preheated the oven to 400°F. And I prayed that it would be true to temp. These are the risks that we take with an unfamiliar kitchen, right? It turns out that the oven took quite a bit to preheat, but the wait wasn’t too long between the time that I was done preparing the biscuit topping and the time that it was finally preheated.

I did actually stop to do a mini mise en place before proceeding with the biscuit topping. I diced one stick of cold butter and zested an orange. And I washed the metal mixing bowl. You might not have multiples of a certain item in a DVC villa kitchen, but thankfully, a quick wash of the bowl was all that it took to be able to move on to the next step. 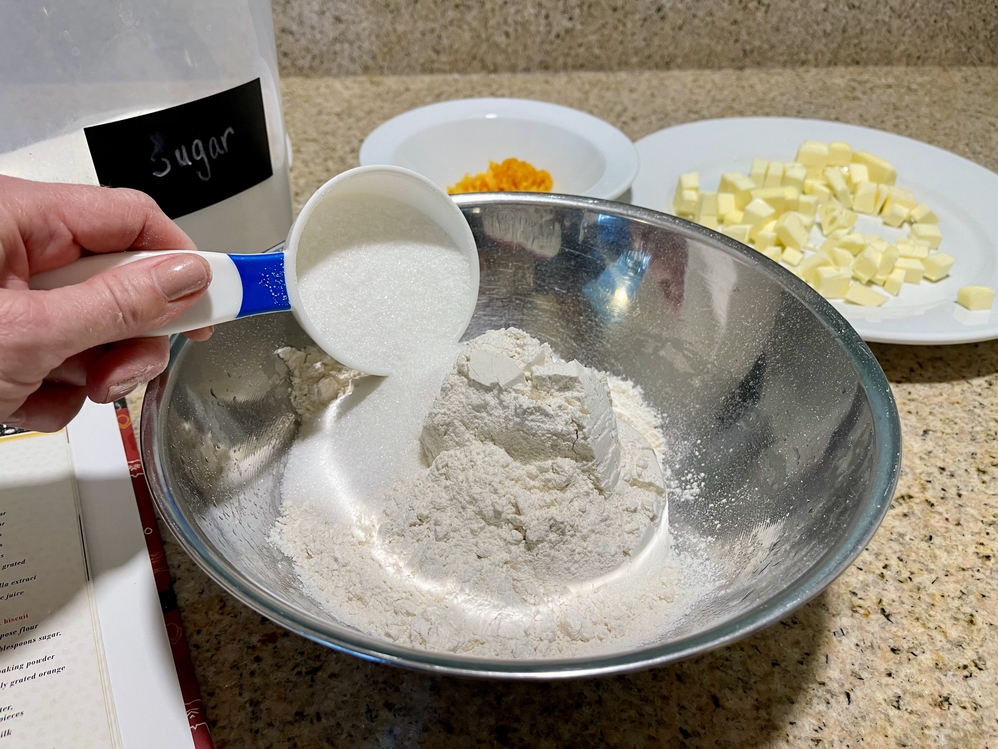 Into the mixing bowl, I tossed 2 1/4 cups of all purpose flour, half of a cup of granulated sugar, and 2 1/4 teaspoons of baking powder. I mixed things together to make sure that they were thoroughly combined. 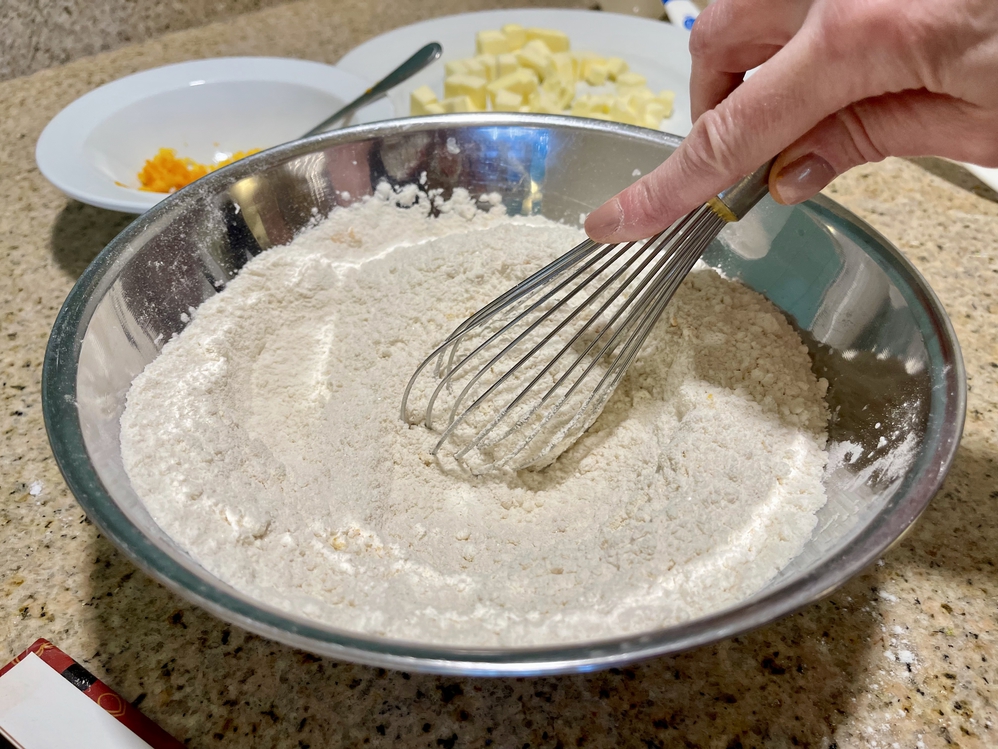 It was now time to toss in 1 teaspoon of that freshly grated orange zest and whisk everything together. Can I just stop and say for a quick minute how amazing the entire villa smelled when I was grating and juicing the lime and the orange? Fiasco was the first to mention it, and he was right. It was so lovely. Again, thank you Napa Rose chefs. 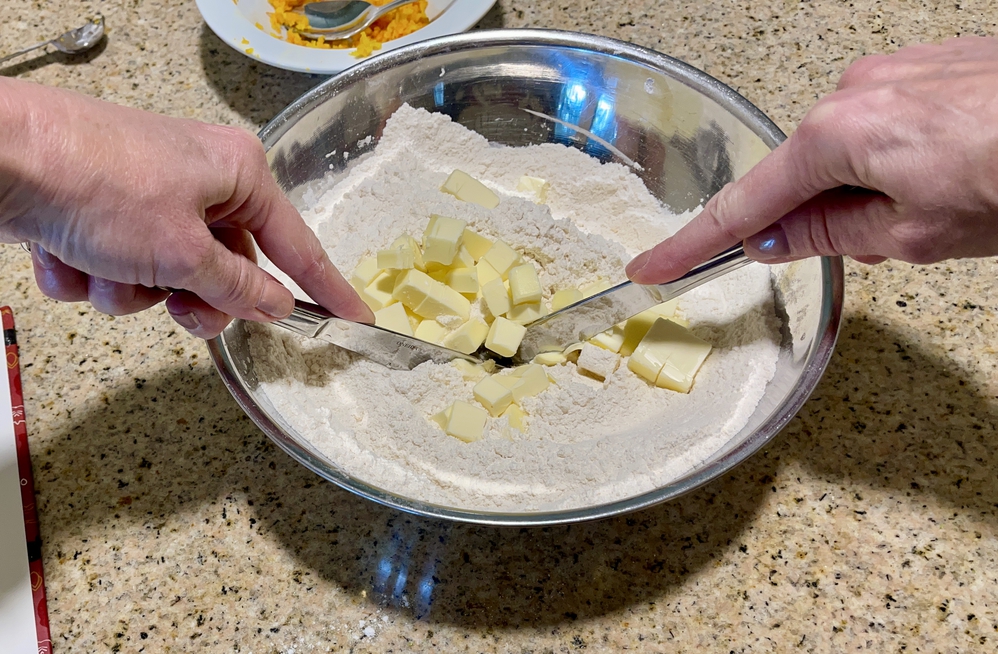 It’s now time to cut the diced cold butter into the dried ingredients. The recipe asks for us to use two knives scissors-style, which simply means we cross them back and forth in the ingredients to cut down and combine the butter. If you have a pastry cutter at home, that would do the trick beautifully. 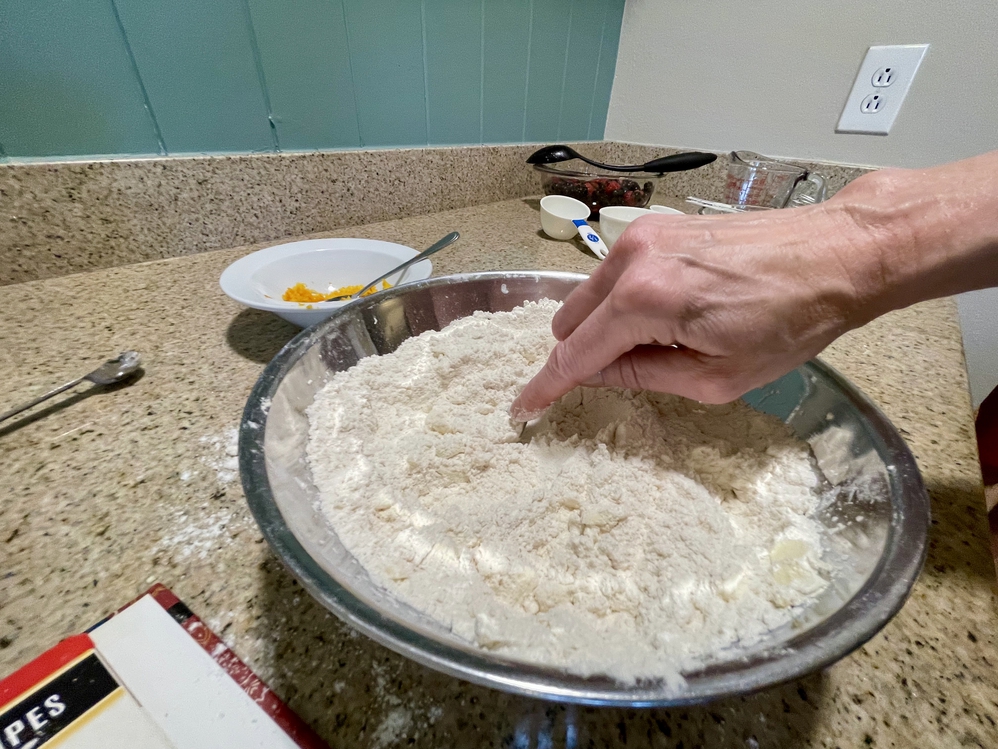 Before everything was said and done, I ended up grabbing a fork out of the utensil drawer and using it to mash the butter into the dried ingredients. Ultimately, you want the mixture to resemble fine breadcrumbs, but I got it as close as I could and hoped that it would be okay. 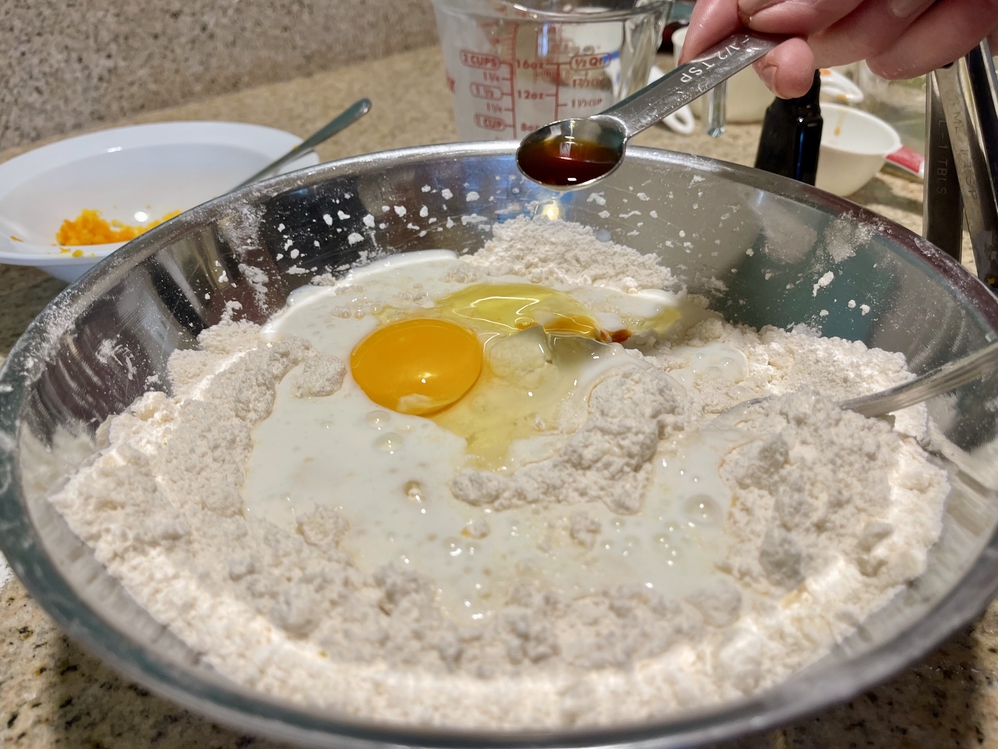 The next step had me adding in 3/4 of a cup of buttermilk, one egg, and half of a teaspoon of vanilla extract. The recipe asks that those three ingredients be folded into the biscuit topping dough with a wooden spoon. 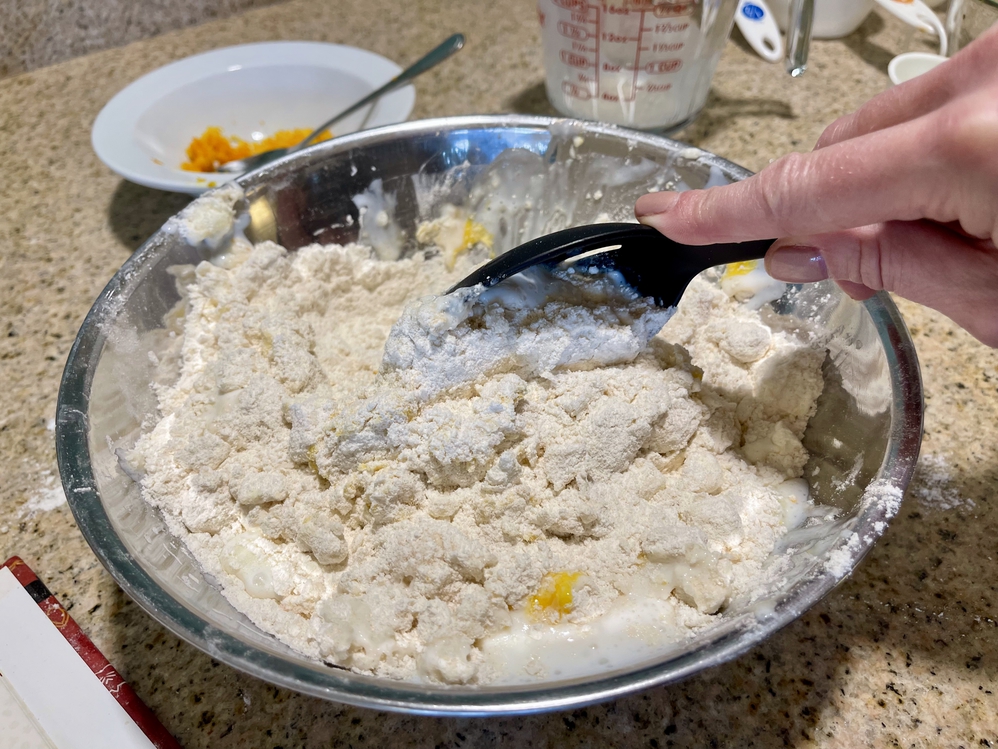 Alas, the kitchen did not come equipped with a wooden spoon, so I grabbed one of the available large plastic spoons and made it work. It wasn’t the easiest thing, but the dough eventually came together. 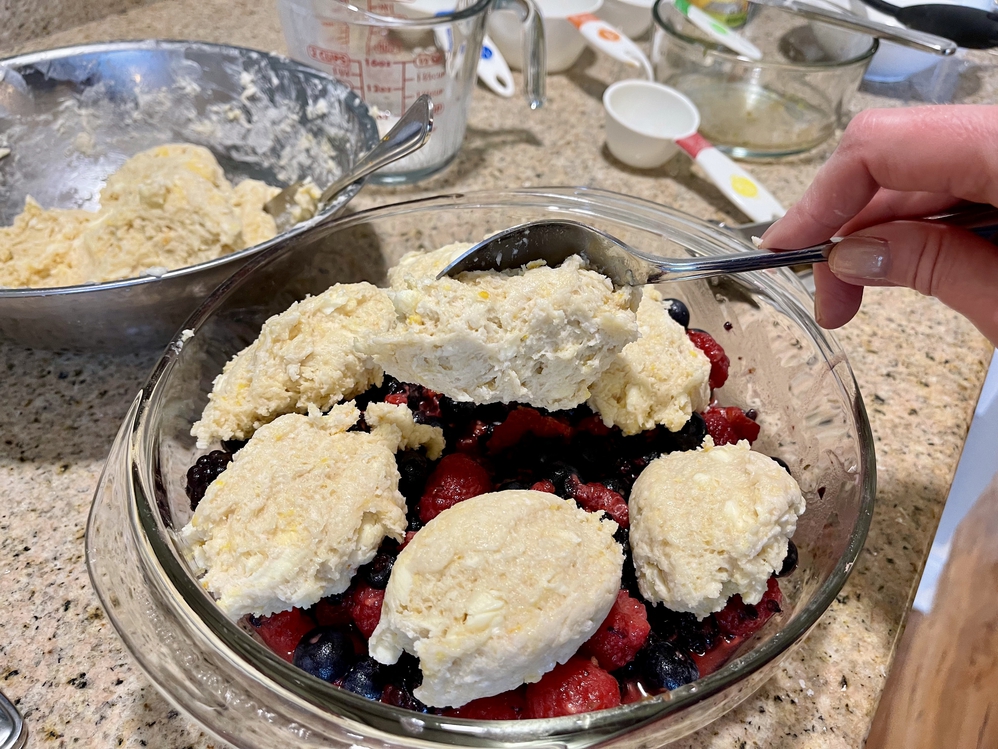 We are now to drop the dough in a dozen large dollops on top of the berry mixture and sprinkle the whole thing with an additional 2 tablespoons of sugar. 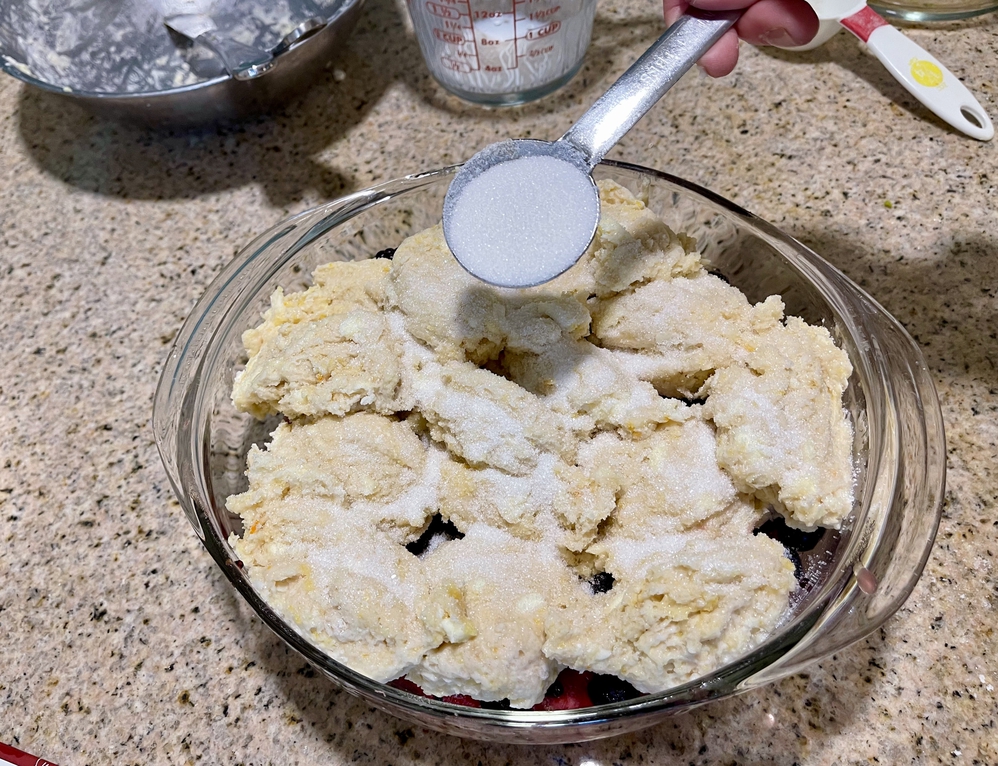 As I was dropping the dough onto the top of the berries, it quickly became apparent that the smaller size of the bowl would impact the cobbler. I was able to fit all of the dough on top of the berry cobbler, but I would definitely suggest holding back just a bit of the dough if you’re using a smaller dish. The very middle of it needed a bit more time in the oven once the cobbler came out.

Once the oven reached 400°, I popped the Pyrex bowl in and wished the cobbler good luck. The recipe states that you and I can top the cobbler with a piece of aluminum foil if the biscuit topping starts to brown too quickly. I set the timer for 40 minutes, and went about prepping the next recipe.

The smell that was wafting through the villa as the cobbler baked? Goodness gracious great balls of fire. It smelled so good. 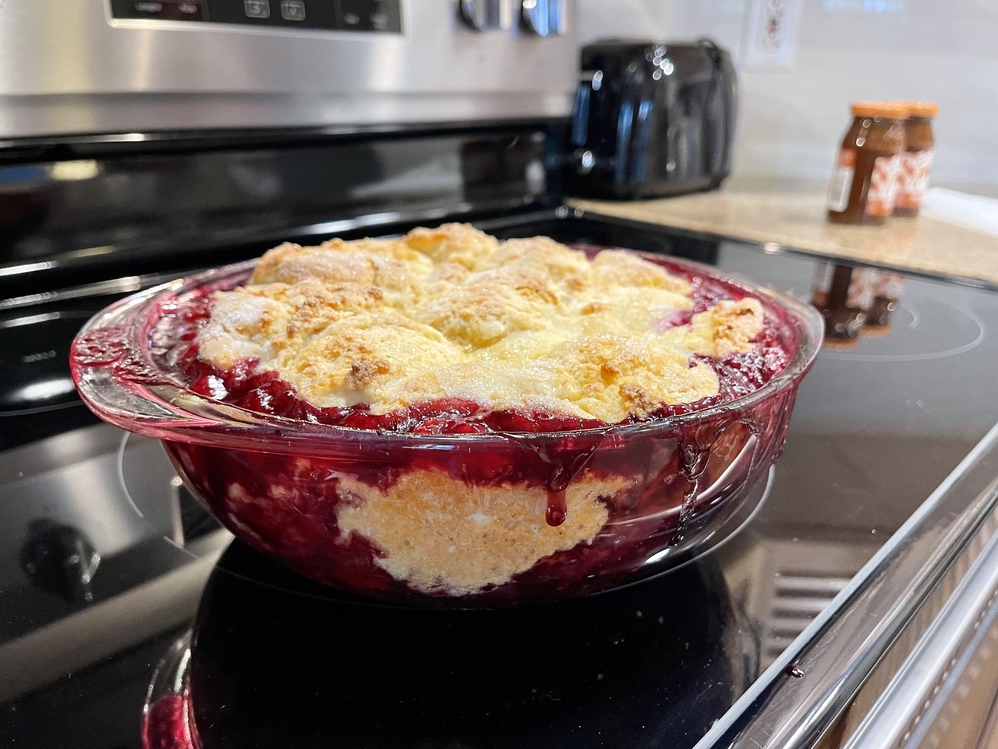 Once the timer sounded at 40 minutes, it became apparent that it needed another five. I wanted things to be a bit more golden brown than they were. 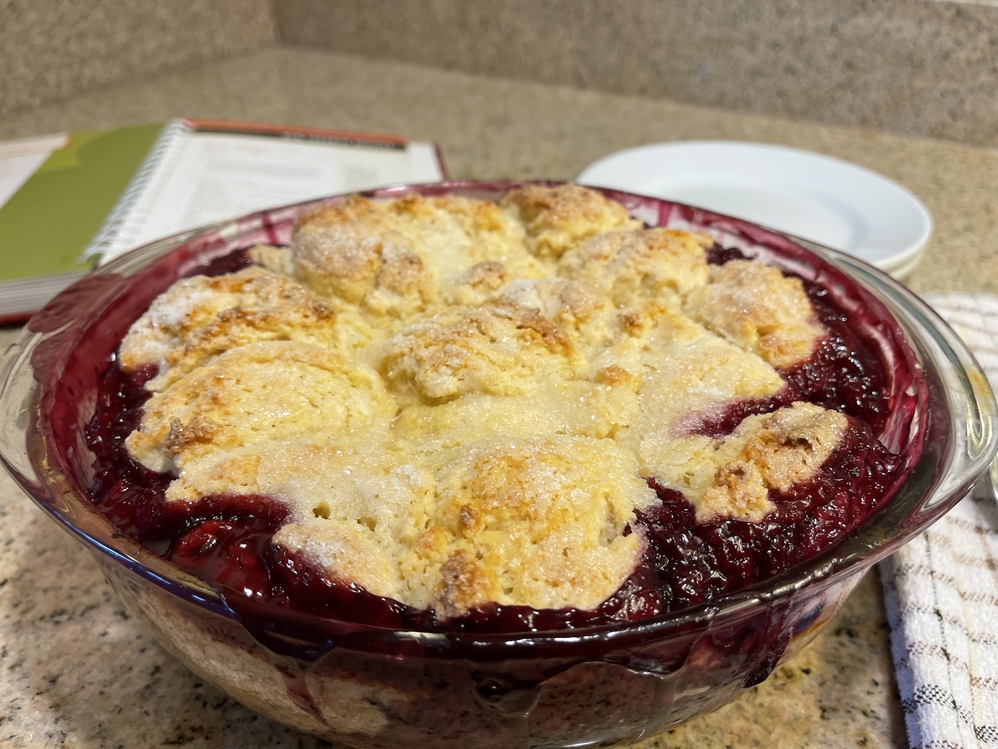 And after the five additional minutes, the cobbler looked amazing. The berries were bubbling the granulated sugar on top of the biscuit topping was glistening. And all was right with the world. 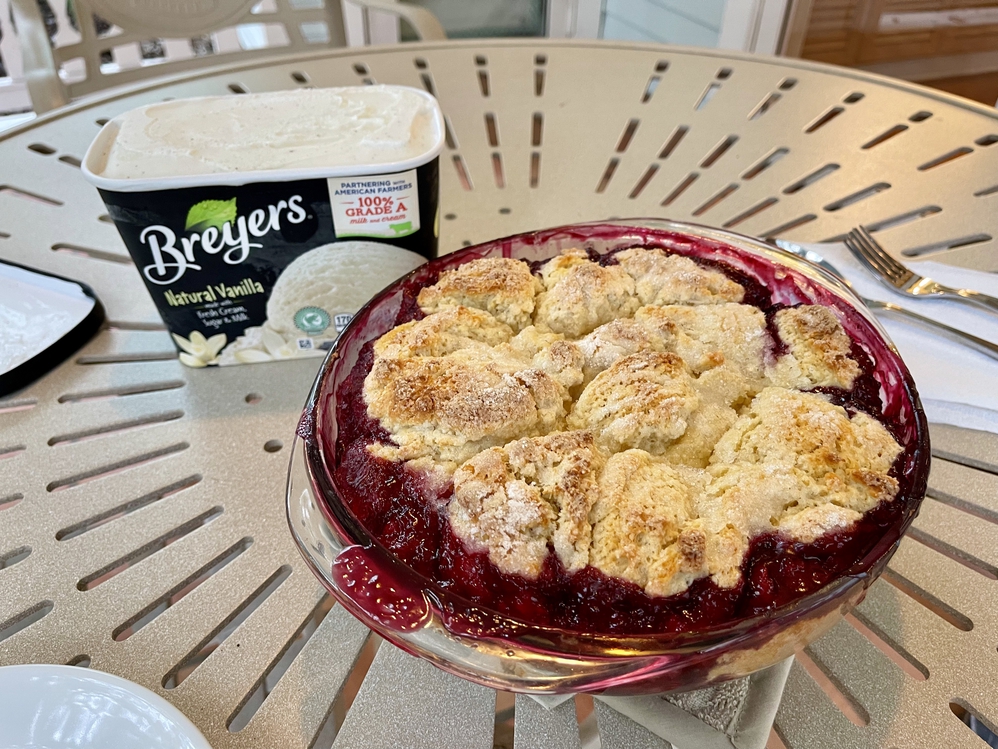 The recipe suggests that we serve it warm with vanilla ice cream, if desired. Yes, recipe. We always desire ice cream with our cobbler, thank you. Fiasco and I enjoyed the cobbler on the patio of the DVC villa. It was a not-too-muggy afternoon, with a light rain falling, and there we sat with this gloriously beautiful, amazing-smelling, fresh-from-the-oven cobbler. I felt like we should invite the neighbors; other people just had to come and enjoy this cobbler with us. It would only be right. Alas, it was up to the two of us to savor this amazing Disney snack. And savor it we did. 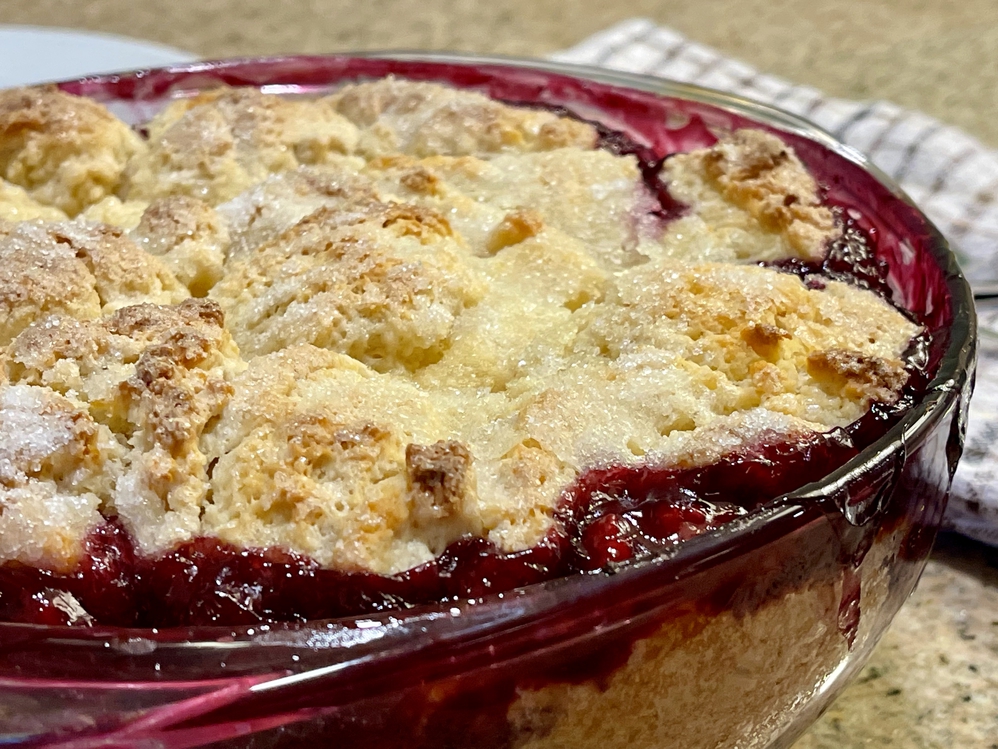 I can’t say enough good things about this cobbler. Yes, we need to zest a lime and an orange and we need to juice that lime, but all in all, it was very easy to put together. And the end result was simply amazing. The berries were so fresh and sweet, thanks to all that sugar that we added.

But my favorite part of the entire cobbler was the biscuit topping. Specifically, it was the orange zest woven throughout the biscuit topping. Friends, you and I have had cobbler after cobbler. This one is different thanks to that orange zest. There were bright citrus notes in every bite, and it was both surprising and delightful.

The very middle of the biscuit topping wasn’t quite baked all the way through, so I tossed the remaining cobbler back into the oven to bake for just a bit. Things eventually got done, but it did cause the cobbler to be a little unevenly done. 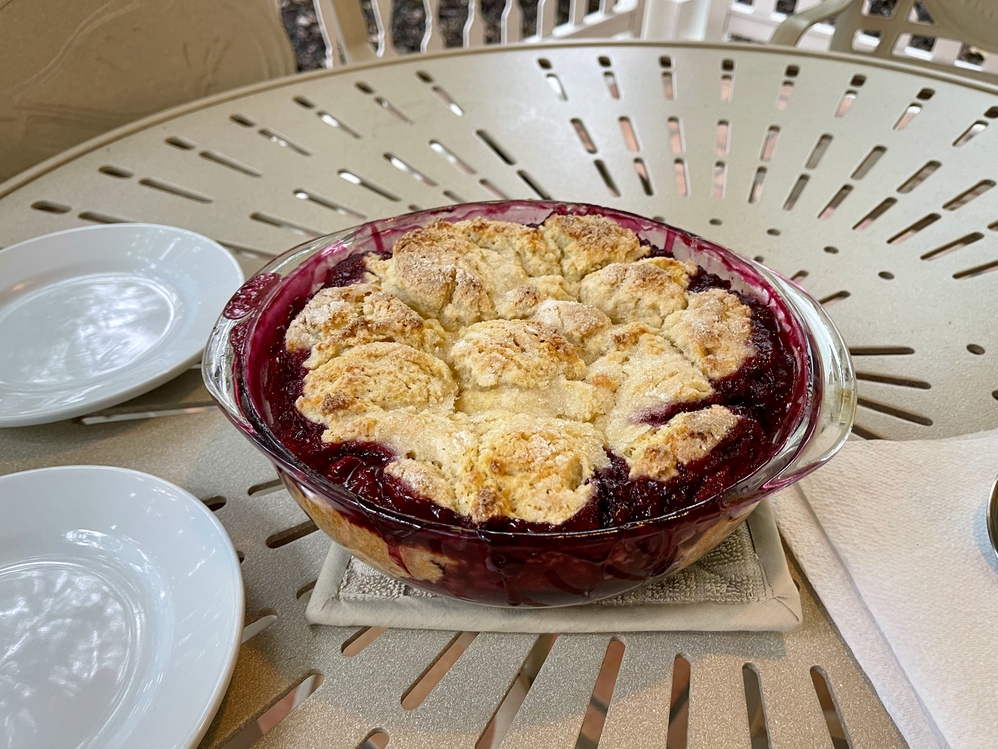 Baking and then snacking on cobbler and ice cream in the comfort of a Disney Vacation Club villa? I highly recommend it. Sitting on that patio, I was so happy that my first mission was complete, and that the recipe had such great results. Mission accomplished.

Whatever impossible missions are ahead for you this weekend, I hope that they are made just a little less impossible as you begin to work through them. And please make sure to work in just a bit of fun (and perhaps the bright notes of a cobbler) into the next two days. Whatever you have coming, may it be something that you savor.

Thank you so much for reading, friends.

PS If you’re new to Saturday Snacks, click here to catch up on the Disney snack-making adventures that we’ve had thus far!