Today is a day to celebrate. It’s Saturday Snacks’ 2nd birthday, and the day before the Super Bowl. If ever there was a time for a celebratory, football-worthy Disney snack, this is it. And today you and I will bring our A game. We’ll leave it all on the field, and we’ll enjoy every bite.

Half of the fun of a big game like the Super Bowl is creating the menu for the event. I don’t care if it’s just the two of you, if you’re flying solo, or if you’re having a group of friends over; the food is important. And the chefs at Disney’s Hollywood Studios are here to help us just in time for the big game! They’ve created a snack that borders on an entrée that is completely Super Bowl-worthy. Today, we will be making Toy Story Land’s Totchos. 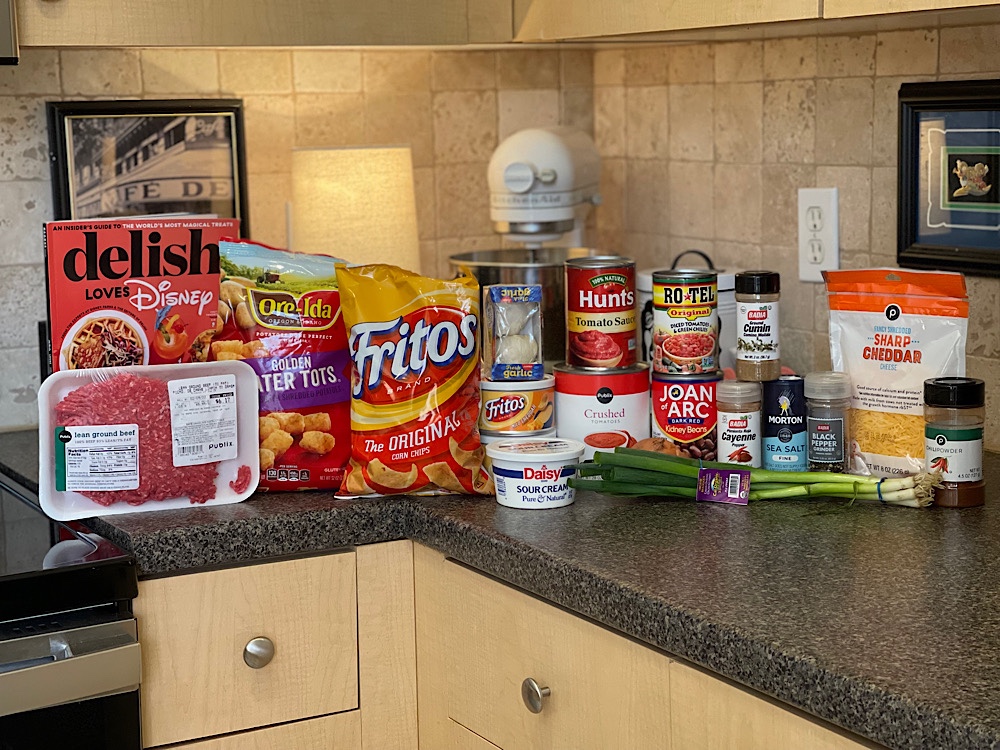 The ingredients list had me once again sorting through the produce section of my local grocery store. We’ll need fresh garlic, a bunch of green onions, and a medium yellow onion, in addition to other things that we’ll find among the middle aisles of the store. We’ll also be needing a pound of lean ground beef, so be sure to grab a package as you head around the back of the store.

Toy Story Land’s Totchos entered the Walt Disney World snack scene with quite a flourish when the land opened almost 4 years ago. I’ve never had Totchos in-park, but I was more than intrigued when I once again stumbled across the recipe in the Delish Loves Disney special issue. I’ve loved the recipes that I’ve made so far from the collab, and I highly recommend picking up a copy if you’re able to.

Our first step in getting down to business and getting prepared for the big game snack is to grab our biggest pot (or as the recipe asks, a Dutch oven) from the cabinet and brown the ground beef. Use medium heat for this step as opposed to the screaming high heat that I’ve used to brown ground beef for basically all of my life. Ahem. 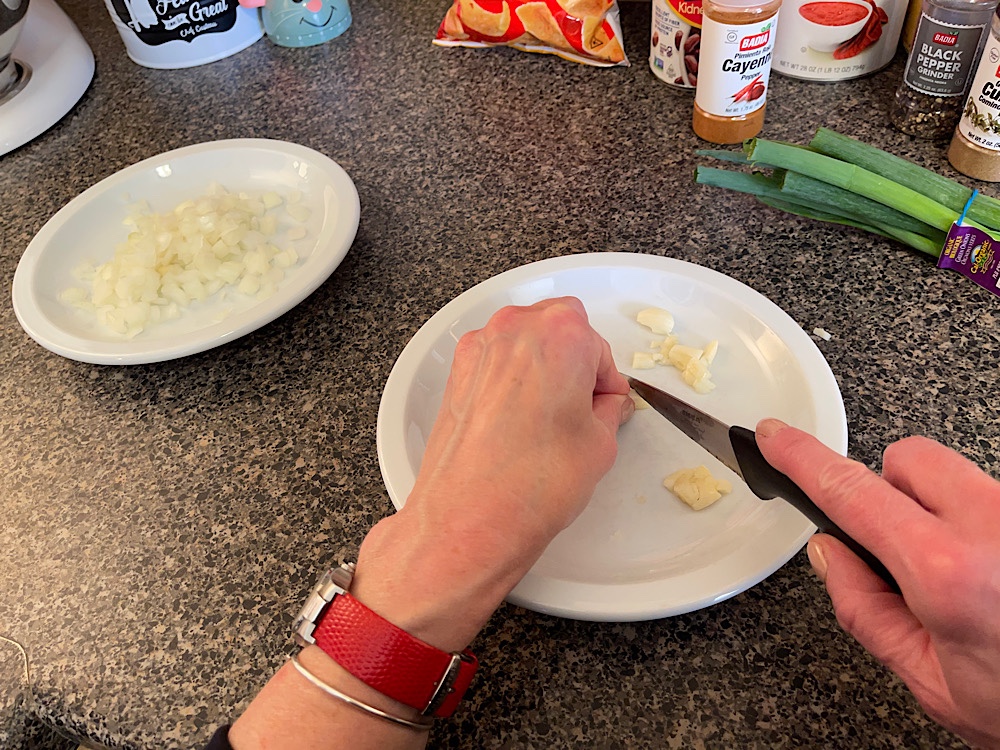 When the beef was brown, I took it off of the heat and gave myself a few minutes to dice the medium yellow onion and smash and mince the 3 garlic cloves. I tossed the onion and garlic in with the browned beef and sautéed things for 5 to 7 minutes on medium heat. We are to continue sautéing until the onion becomes translucent. Hang in there; this step takes a few minutes, but it’ll get there. 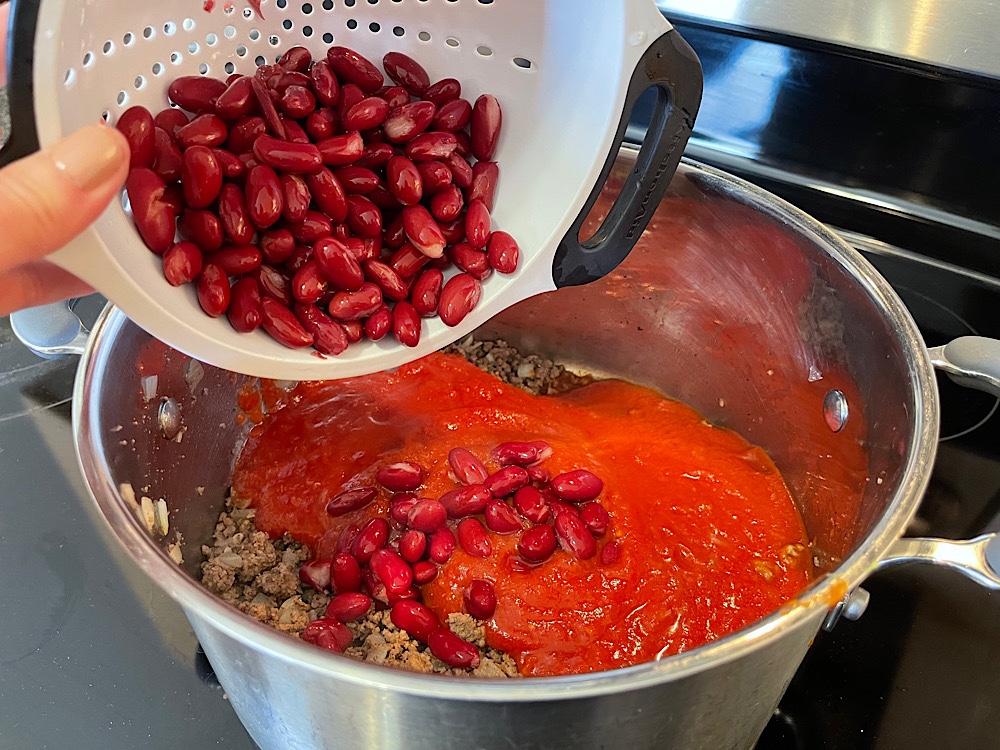 Once the onions turn translucent, toss in 14.5 ounces of crushed tomatoes, a 15-ounce can of tomato sauce, one can of kidney beans (be sure to drain them first), 2 tablespoons of chili powder, 1 tablespoon of ground cumin, 1 tablespoon of coarse salt, and black pepper and ground cayenne to taste. 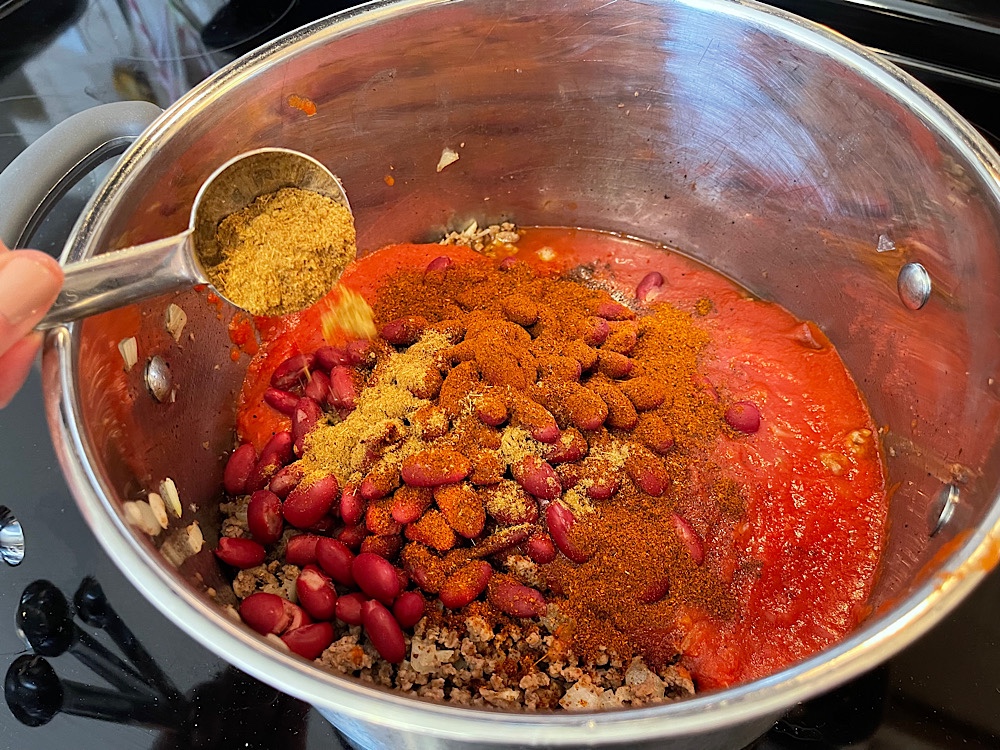 I love when Disney recipes have us dump a bunch of ingredients in one fell swoop into a big pot and it turns into something magical. This is no exception. We’re making the chili and beans that will top the tater tots, and this chili is going to be a nice hearty one. 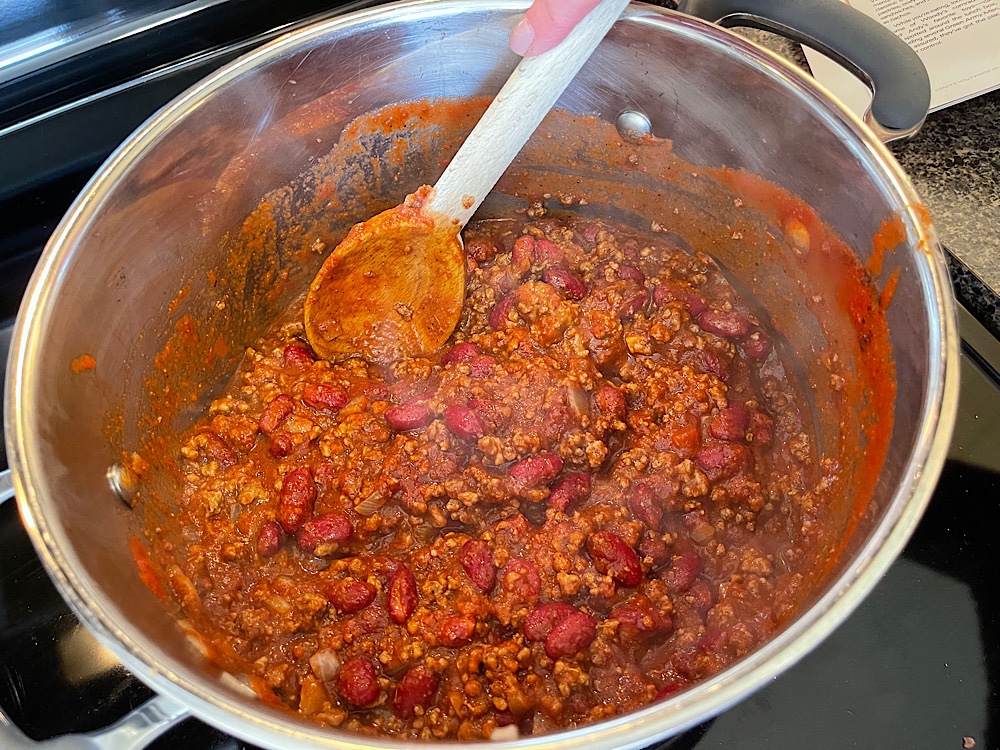 Let the chili simmer for 20 minutes while you get things ready for the queso sauce that’ll top it. Queso sauce, you say? Yes, friends. Glorious, cheesy, nothing-real-about-it queso sauce.

While you’re starting to turn your mind toward all things cheese, also go ahead and preheat your oven to the temp called for on the back of your 2-pound bag of tater tots. You’re gonna want really hot tots at just the right time, so it’s best just to get that oven up to temp now. And please, by all means, rip open that bag of Fritos (umm I mean corn chips), and pop a couple in your mouth. Making Super Bowl-worthy snacks is no small task, and you need the perfect salty sustenance for the job. 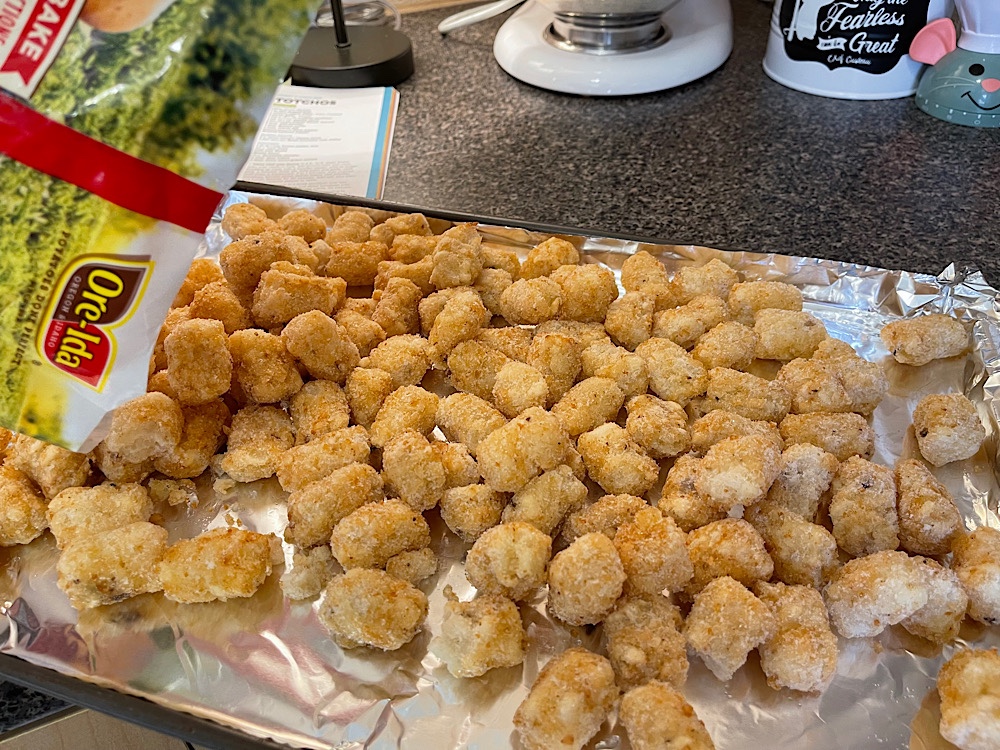 If your tater tots are anything like mine, now is the time to pop them into the oven. To make an entire bag of tater tots, the bag suggested that I give them 25 to 30 minutes in the oven. Unfortunately, the tater tots bag did not say to give the pan a little spray oil. I thought about doing it, but I wanted to stick to what was suggested. Halfway through baking, my tots were one with the foil that they were sitting on. AUGH. I scraped those tater tots (while trying not to absolutely lose my cool) off of the first sheet of foil and transferred them to a fresh sheet of foil that had been coated with a little spray oil. 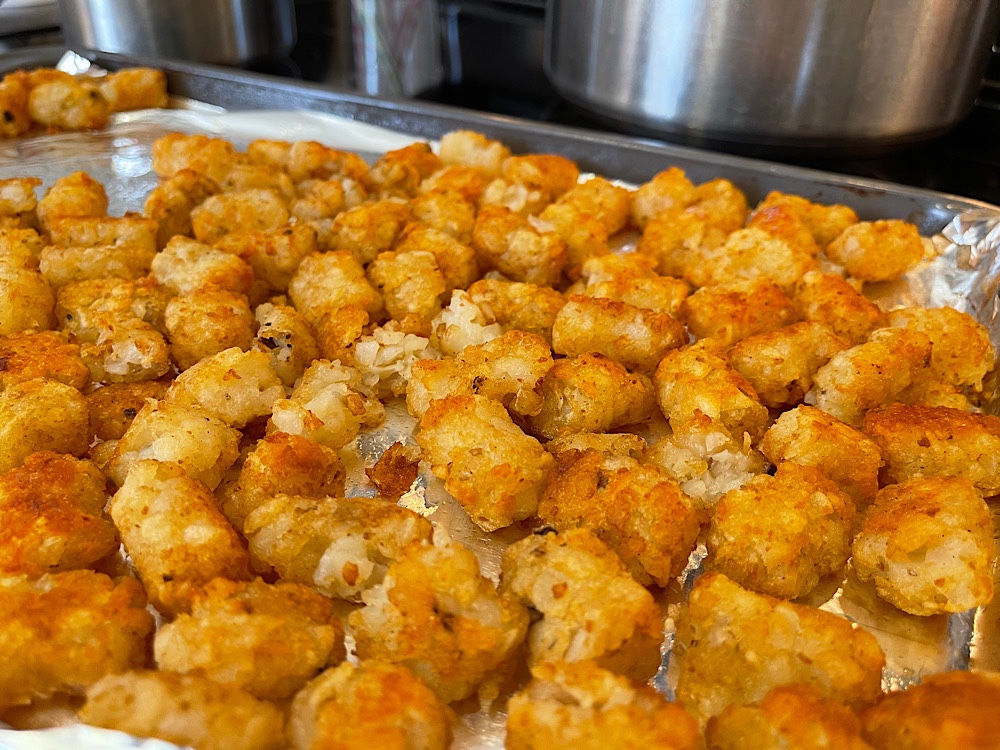 Some of my tater tots would look a little worse for the wear in the end, but it didn’t really matter. Those tots were about to get covered with yummy chili and beans, queso sauce, and an assorted amount of other things. It wasn’t going to matter that my tater tots weren’t perfect. 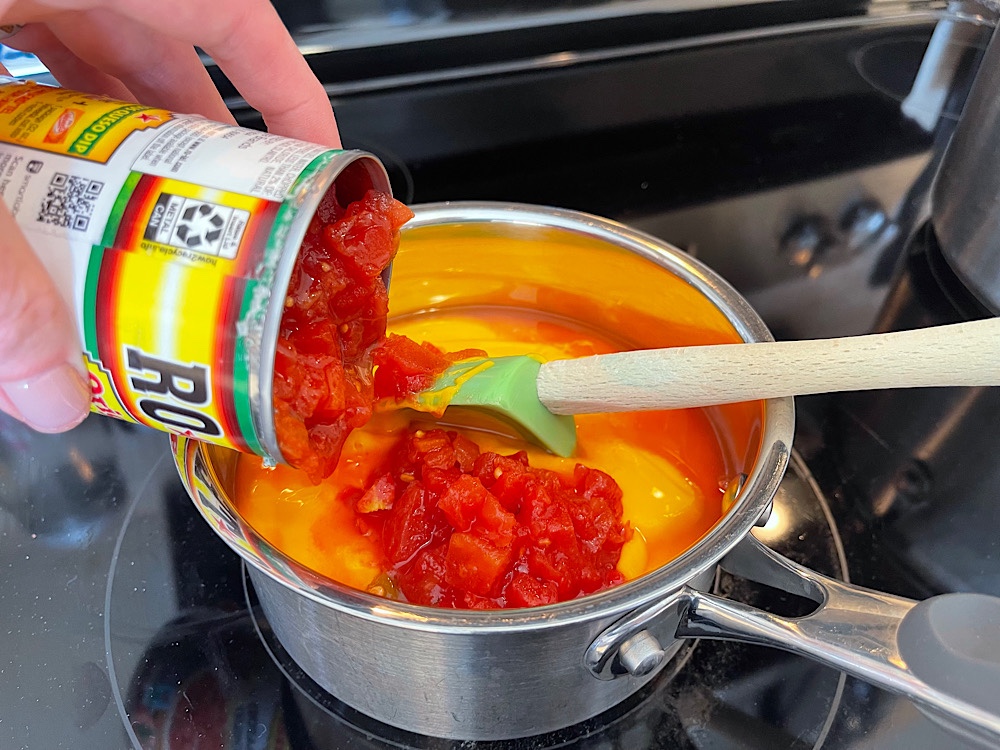 I then grabbed the smallest sauce pan out of the cabinet and carefully scooped 2 cups of jarred cheese sauce into it. I also dropped in an undrained can of Rotel diced tomatoes and chilies. Honestly, is it really a big football game without one of the dishes being served using a can of Rotel? I think not. 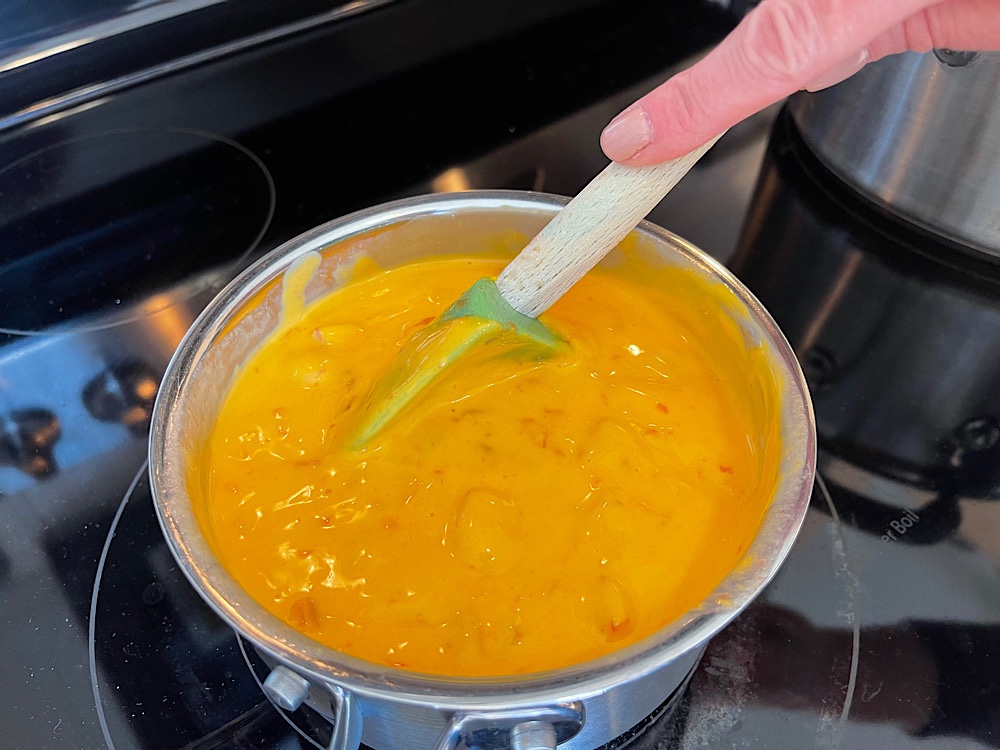 I followed the recipe and brought the queso up to temp over low heat over the course of 10 minutes or so. I kept it warm until it was time to build the individual bowls of totchos. 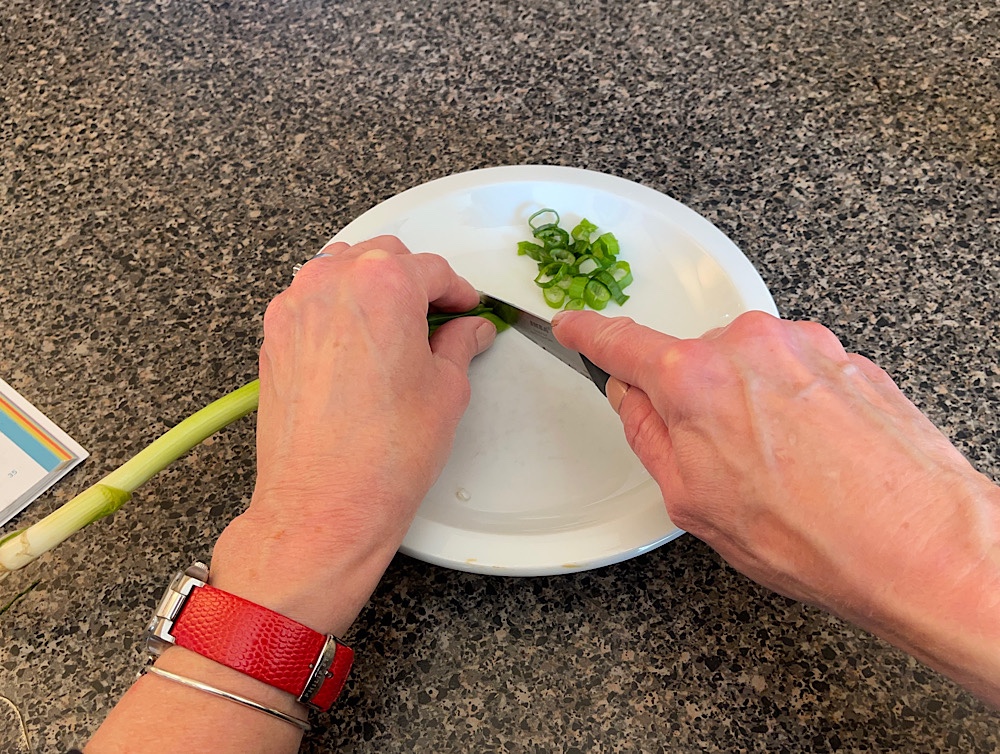 While the tater tots were still in the oven, I took a few minutes to thinly slice a green onion. I also pulled the sour cream and shredded cheddar cheese out of the refrigerator. I wanted to have everything ready to go when those hot tots were done. I just couldn’t wait to build the bowls and dig in. I hoped this would be epic. 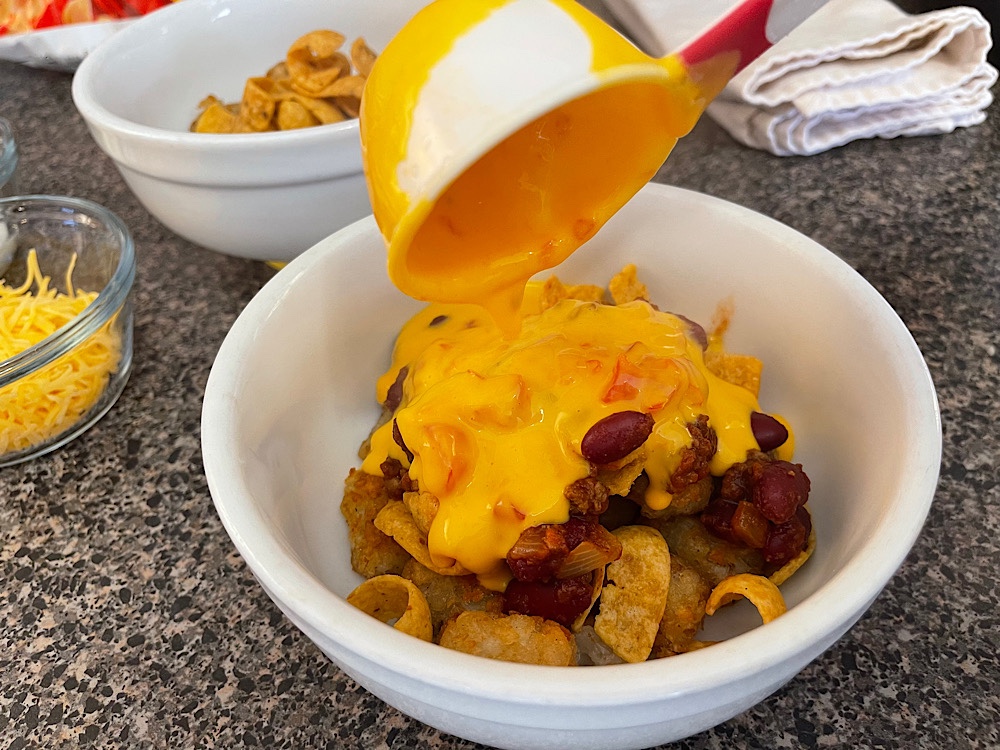 When our tater tots are done, we are asked to divide them among six bowls. We then top the tater tots with 1/4 cup of corn chips, 1/4 cup of beans and chili, and 1/4 cup of queso sauce. 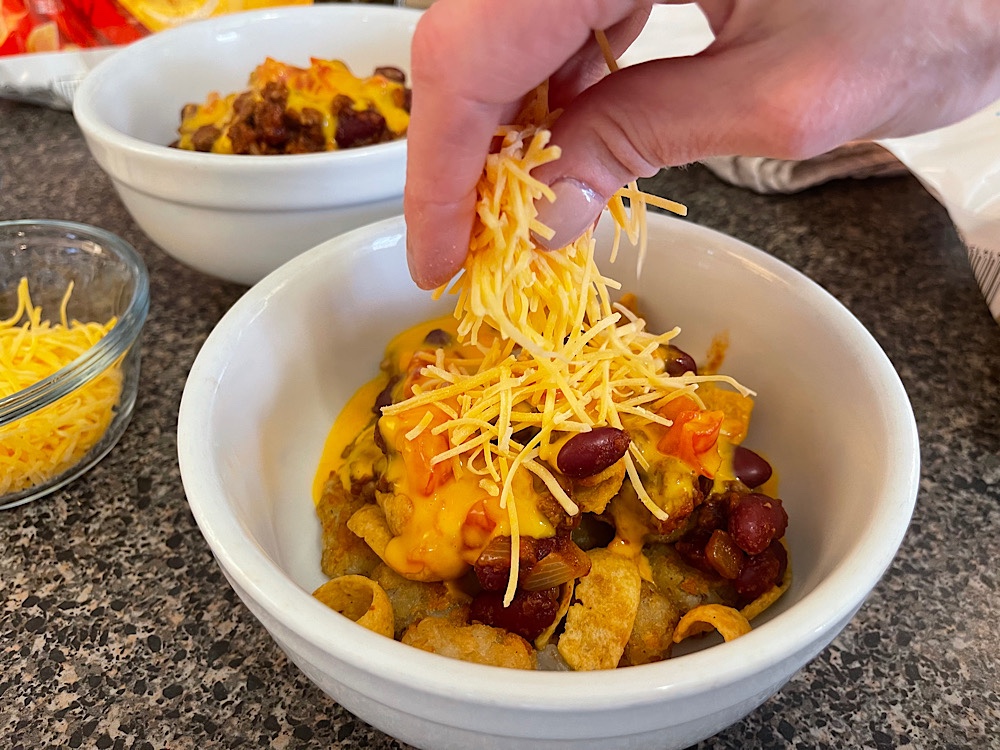 To top the whole enchilada (ummm Totchos), we’re asked to add 2 tablespoons of shredded cheese, 1 tablespoon of sour cream, and 1 teaspoon of green onions. Of course, you do you. If you don’t like sour cream or shredded cheese or green onions, leave them off. This is your Super Bowl, and you’re calling the plays. 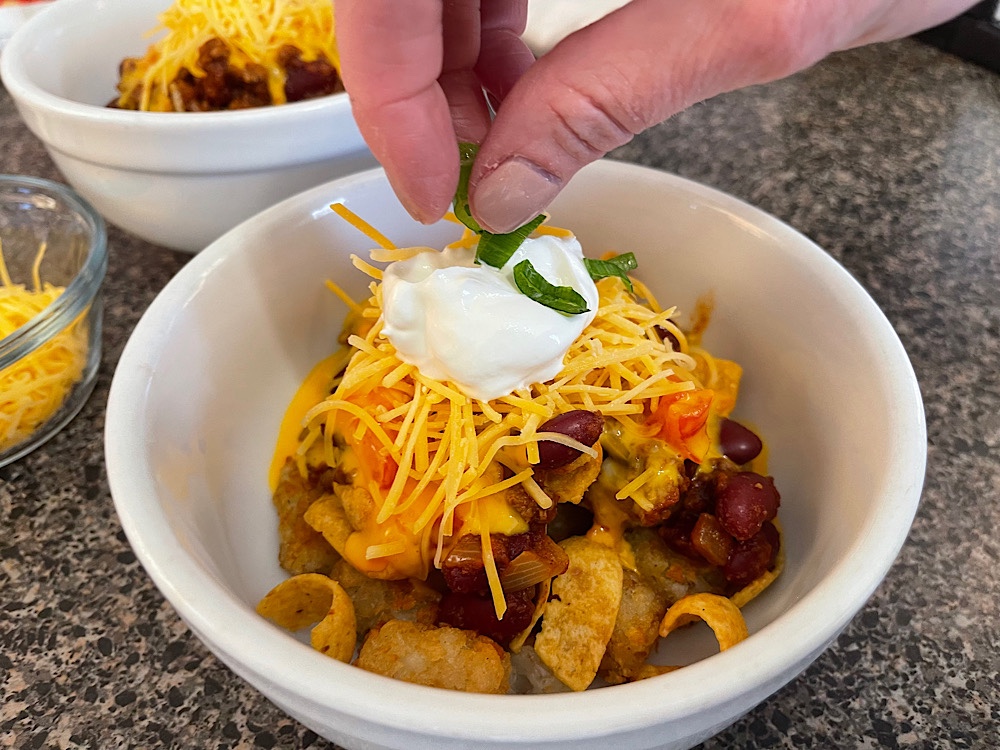 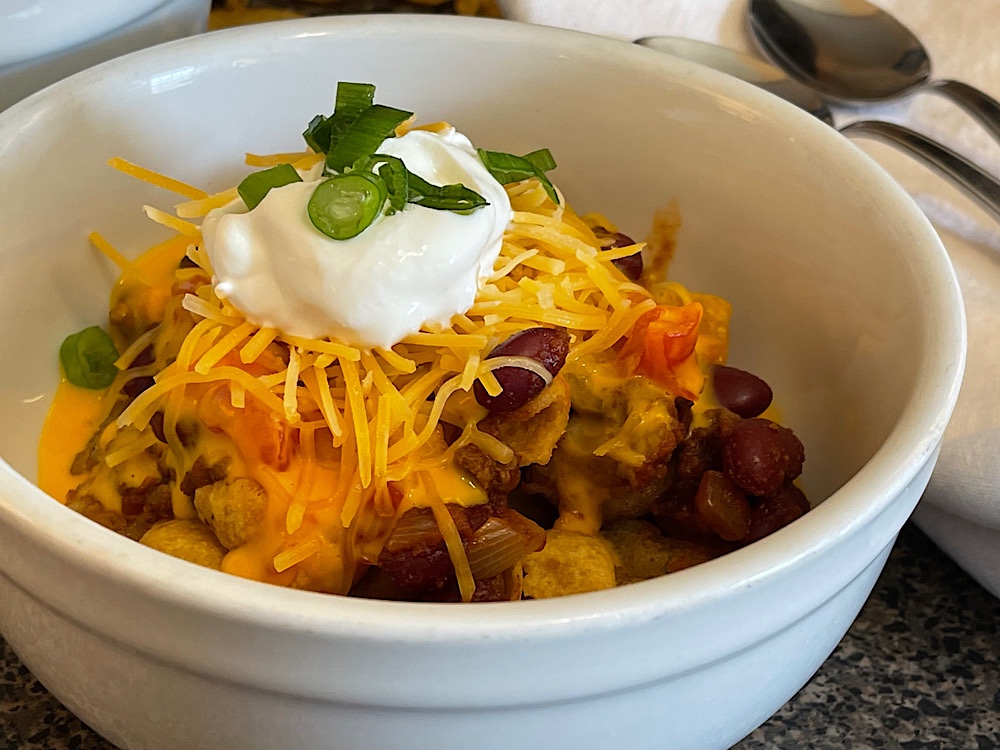 Toy Story Land’s Totchos are not for the faint of heart. They’re hearty and salty and oh so good. This would be the perfect thing to have ready at halftime and invite friends and family into the kitchen to build their own bowls as they see fit. If you’re not wanting to fire up your oven and heat up the house and you’ve got an air fryer on hand, those tater tots can be tossed in there and kept warm until they’re needed. That pot of chili and beans can simmer on the stove and the queso sauce can be kept warm until the time is right. 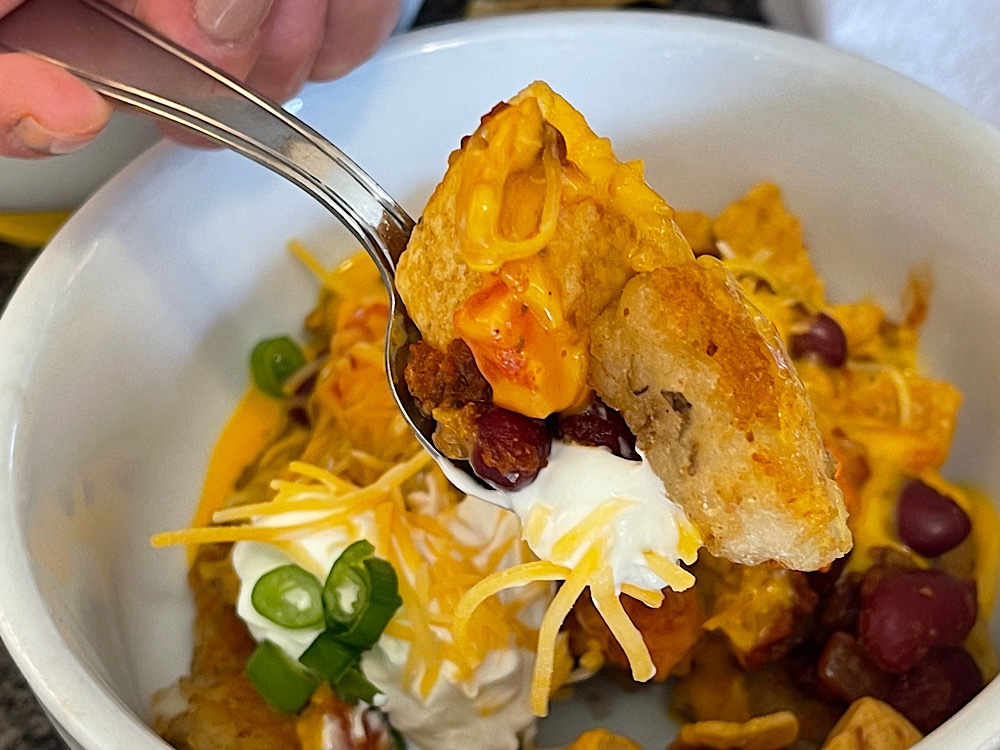 The individual layers of a bowl of Totchos meld together to create a beautiful and filling Walt Disney World snack. Would I want to be eating this on a hot summer’s day in Disney’s Hollywood Studios? No, I’m not so sure I would. But a cooler, football-frenzied February evening? Absolutely. 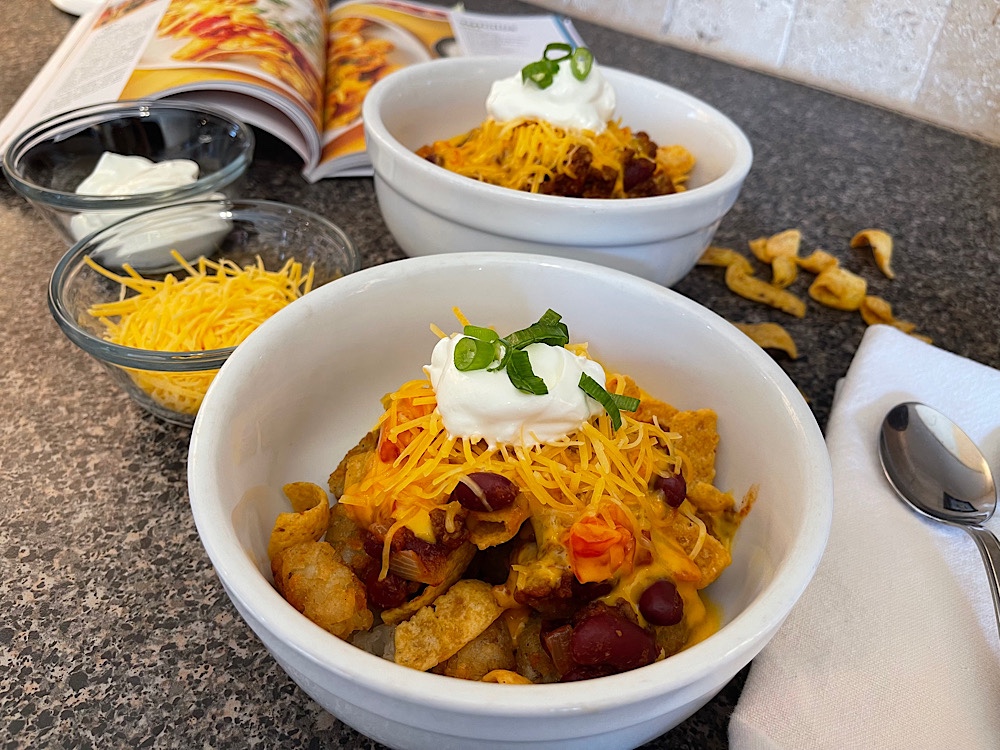 This is Super Bowl-worthy Disney snack magic. Those Disney chefs have gone and done it again. And anyone who digs into the Totchos that we make will be better for it.

Whether or not your team wins or loses this weekend, I hope that it’s a good one. Stay warm, eat a delicious snack or two, and take good care. We’re all on the same team, and we’re all in this together.❤️💪

Ready to create the perfect halftime Walt Disney World snack? The recipe for Toy Story Land’s Totchos is below:

For Chili with Beans: