Friends, with today’s Saturday Snacks recipe, you and I are channeling a bit of Babe Ruth a la the 1932 World Series. We are stepping up to the plate, pointing toward the centerfield fence, and swinging for a home run. Of course, it’s been hotly debated as to whether or not Ruth was actually pointing at the centerfield fence or Cubs’ dugout instead, but for our purposes, we’ll say it was centerfield, okay? Today’s recipe is a big task, but we’re willing to go for it.

Today, we’re going to make Disney’s Polynesian Resort’s Tonga Toast, and, while I was a bit wary going into it, I wasn’t quite as nervous as I normally would have been. I knew that you and I would get as close as possible to the real thing, and we’d roll with it along the way. And, thankfully, I had a bit of help in getting it as close as possible to what guests are served at the Poly. 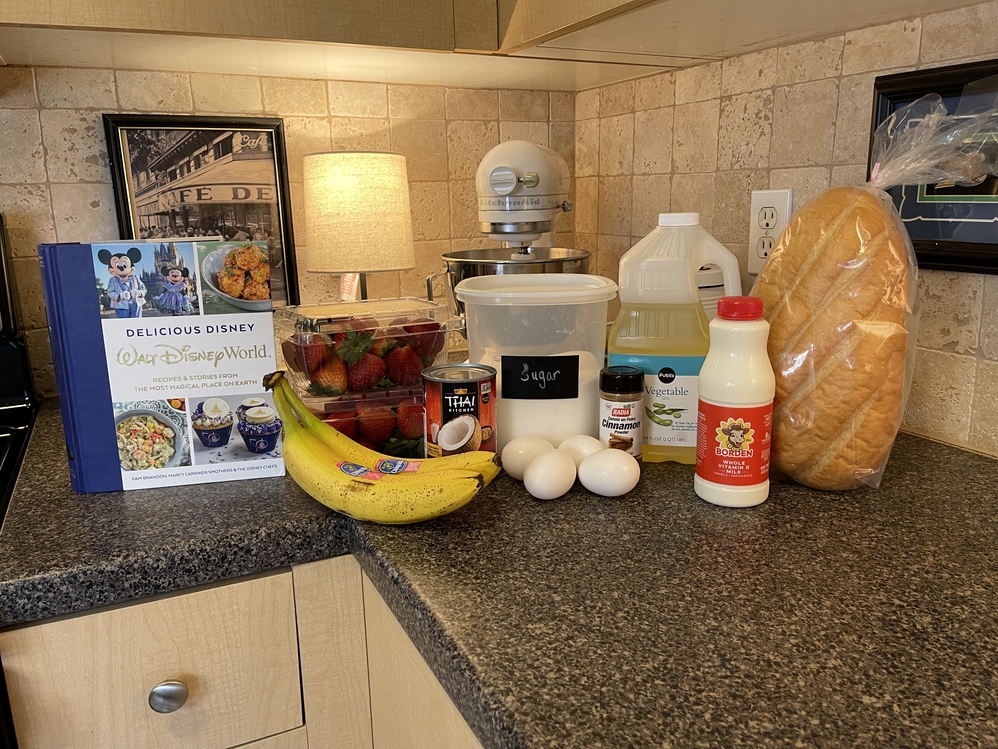 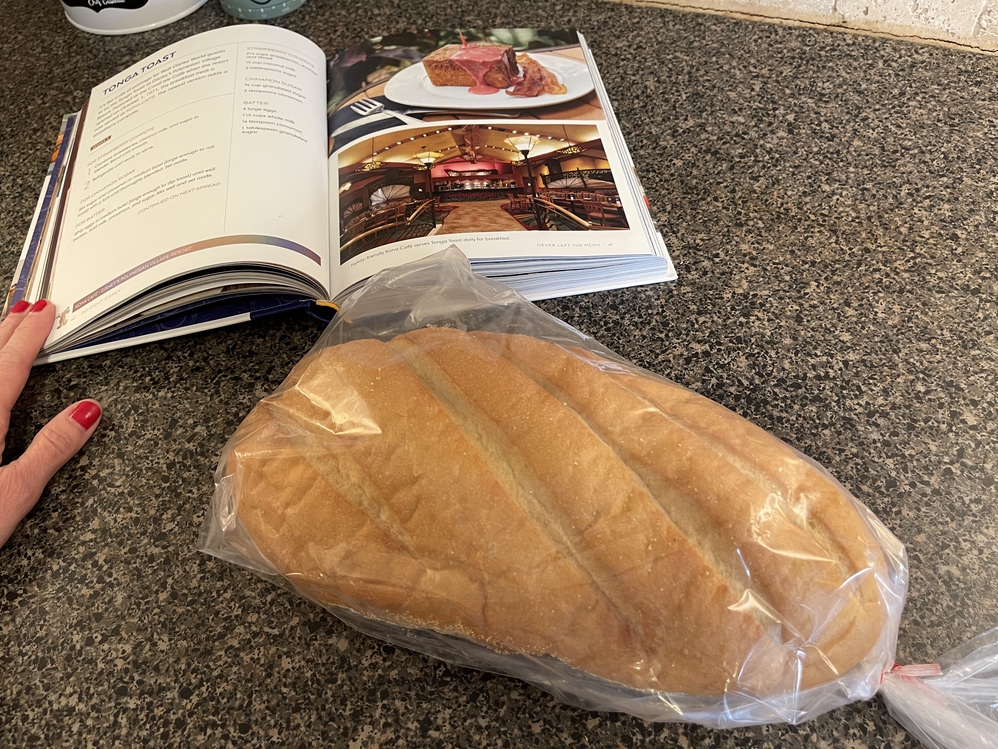 The amazing bakery staff at my grocery store offered to bake me a sourdough loaf in the shape of a regular loaf of bread. It wasn’t going to be 12 inches long like the recipe asks, and it wasn’t in the shape of a perfect rectangle, but it was pretty close, and I was very happy. I came back the next day to pick up my specially-baked loaf of bread. You are the best, Publix.

I’ve toyed in the past with the idea of attempting Tonga Toast for Saturday Snacks, but one thing was missing all along: the recipe for the strawberry compote that accompanies the dish when it’s served at Kona Café. As of the last time that I enjoyed the Tonga Toast at the resort’s quick service location (Captain Cook’s), the strawberry compote is not served with the dish. In my mind, you shouldn’t have one without the other. That compote is just that good.

Thankfully, Delicious Disney Walt Disney World: Recipes and Stories from the Most Magical Place on Earth includes the strawberry compote recipe. Bring on the Tonga Toast! 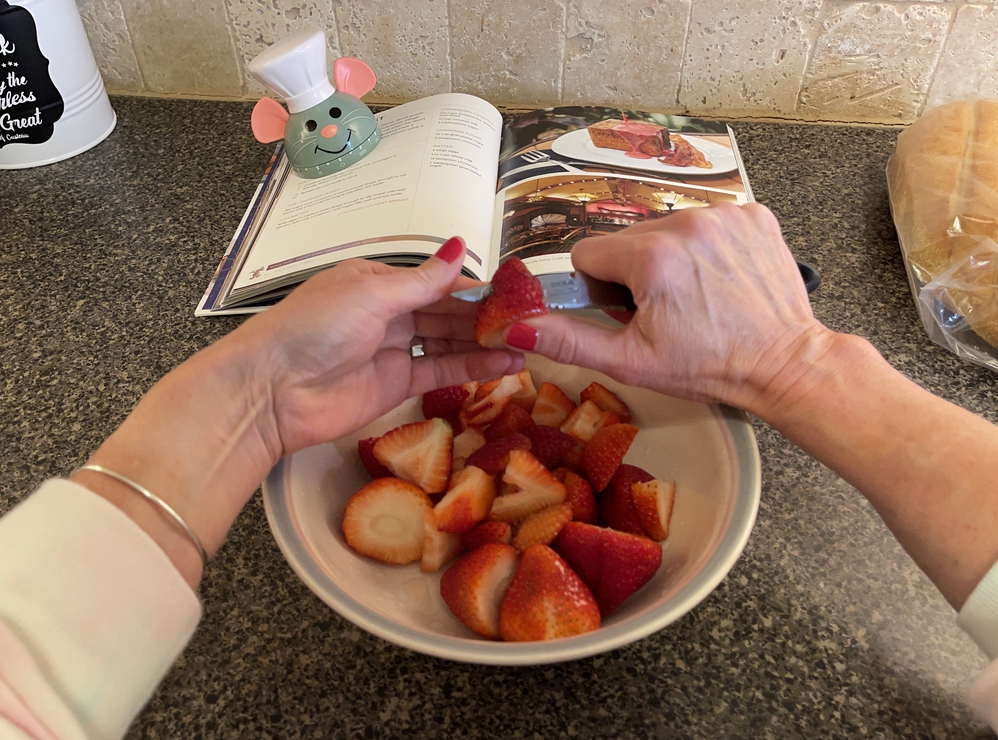 The first step to creating Tonga Toast is easy enough: you and I are asked to wash and slice 2 1/2 cups of fresh strawberries. When I had everything washed and sliced, I tossed them into my blender and added in 1/3 cup of coconut milk and 3 tablespoons of granulated sugar. 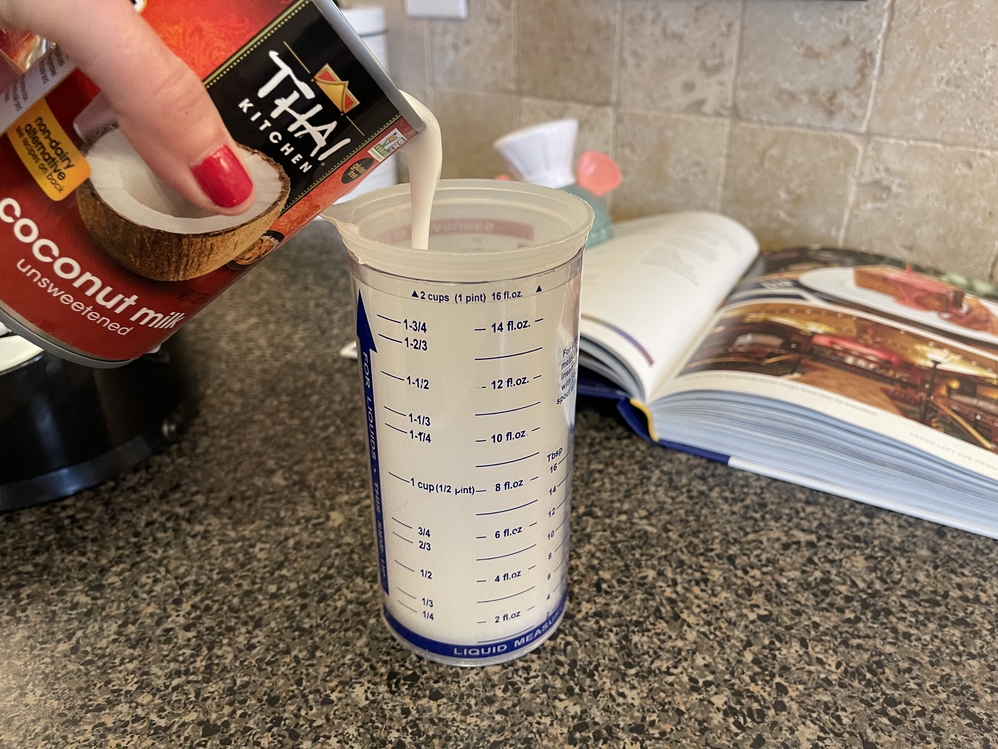 Before you start pouring your coconut milk, be sure to give the can a really good shake. Things in that can have settled as it sat on your grocery store’s shelf, and you’ll want to make sure that everything is good and combined before you attempt to pour it out.

Run your blender until everything is nice and smooth (I gave it plenty of time to break down as many of the strawberry seeds as possible), and place the strawberry compote in the refrigerator to get cold while you assemble the toast.

As I began to prepare the batter and coating for the Tonga Toast, I noticed a theme: sugar. Sugar, sugar, and more sugar will go into this recipe, and to be honest, I’m not complaining. If you’re looking for something on the savory side, this isn’t the dish for you. 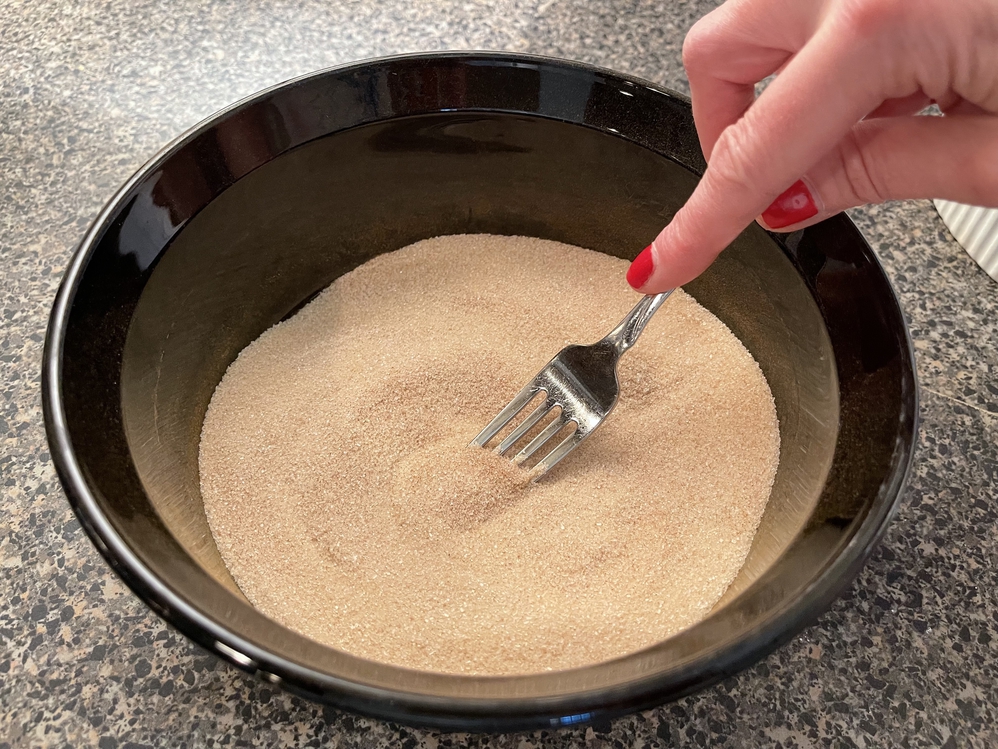 I next pulled out a medium-sized bowl and tossed in 3/4 of a cup of granulated sugar and 2 teaspoons of cinnamon. Using a fork, I made sure that everything was mixed together. I then set the bowl aside. 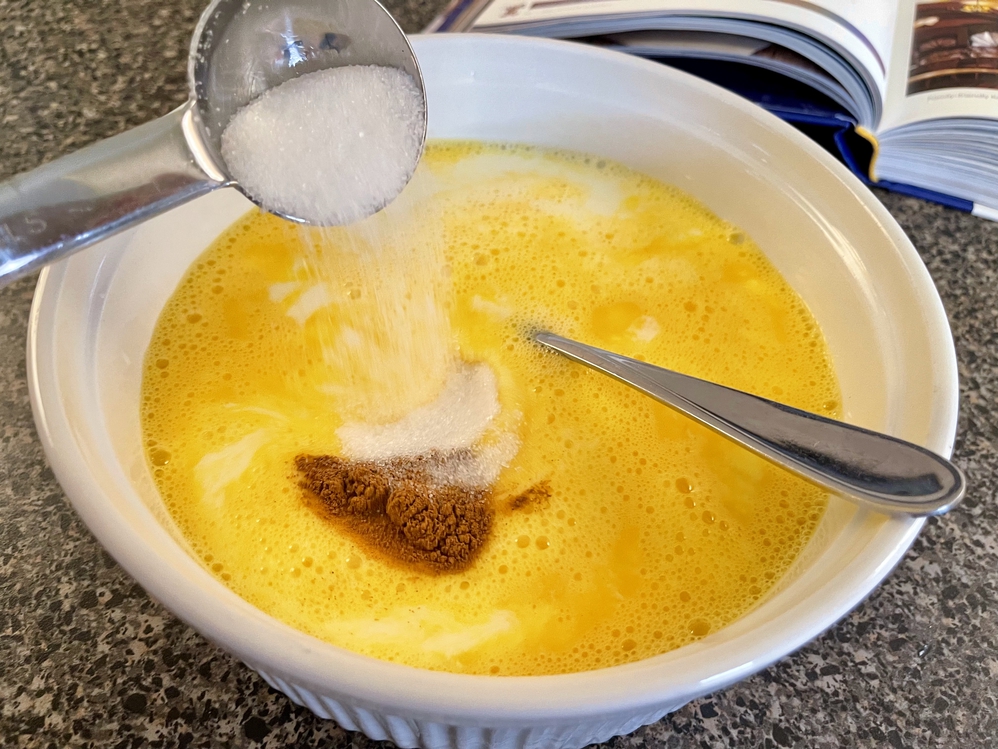 In an additional medium-sized bowl, I cracked four large eggs and beat them with a fork. After beating the eggs, I added in 1 1/3 cups of whole milk, a 1/4 teaspoon of cinnamon, and you guessed it, more sugar. One tablespoon, to be exact. 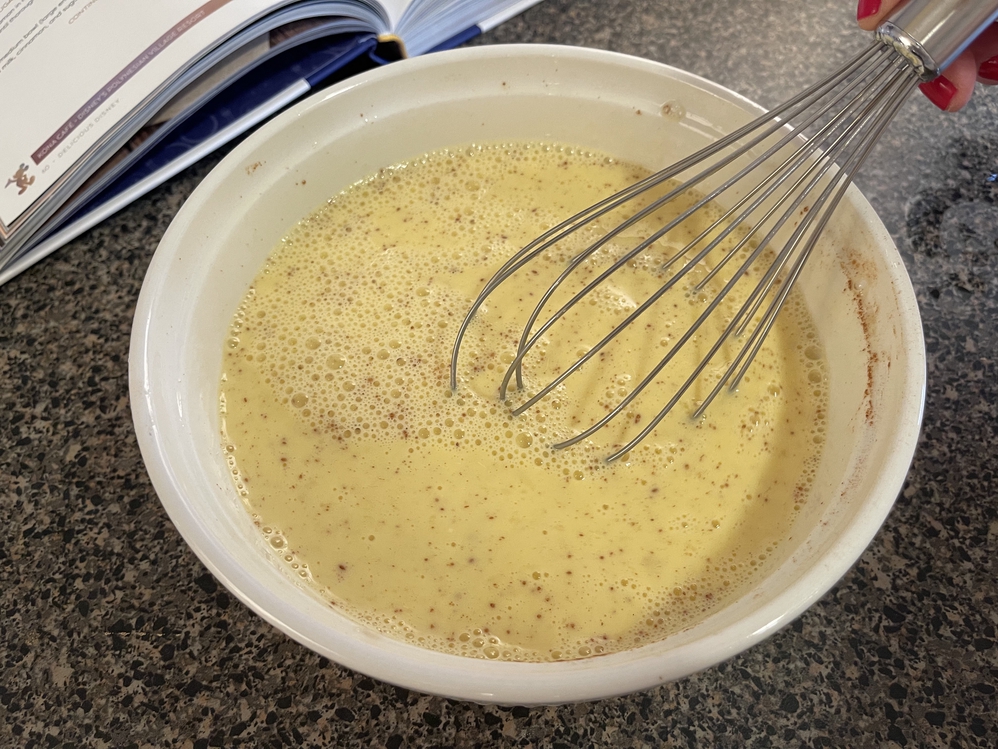 I mixed things up as best as I could with a fork, and ended up grabbing my whisk out of the drawer to finish the job. The cinnamon will try to separate from the rest of the batter, but when it’s time to dunk your bread, just give it an additional swish to make sure that things are as combined as possible.

It now came time to cut into that beautiful loaf of sourdough bread. I grabbed my 1993 NFL AFC ruler and measured out an exact 3-inch slice (more like chunk) of bread. 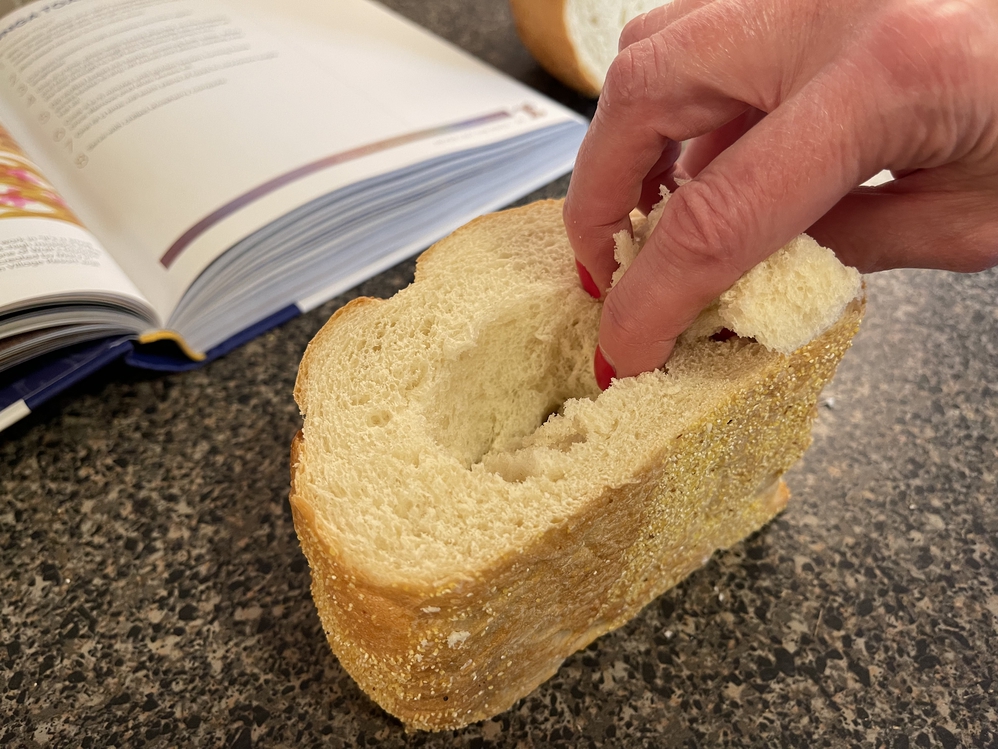 As the recipe requests, I dug some of the middle out of the slice of bread without going through to the other side. 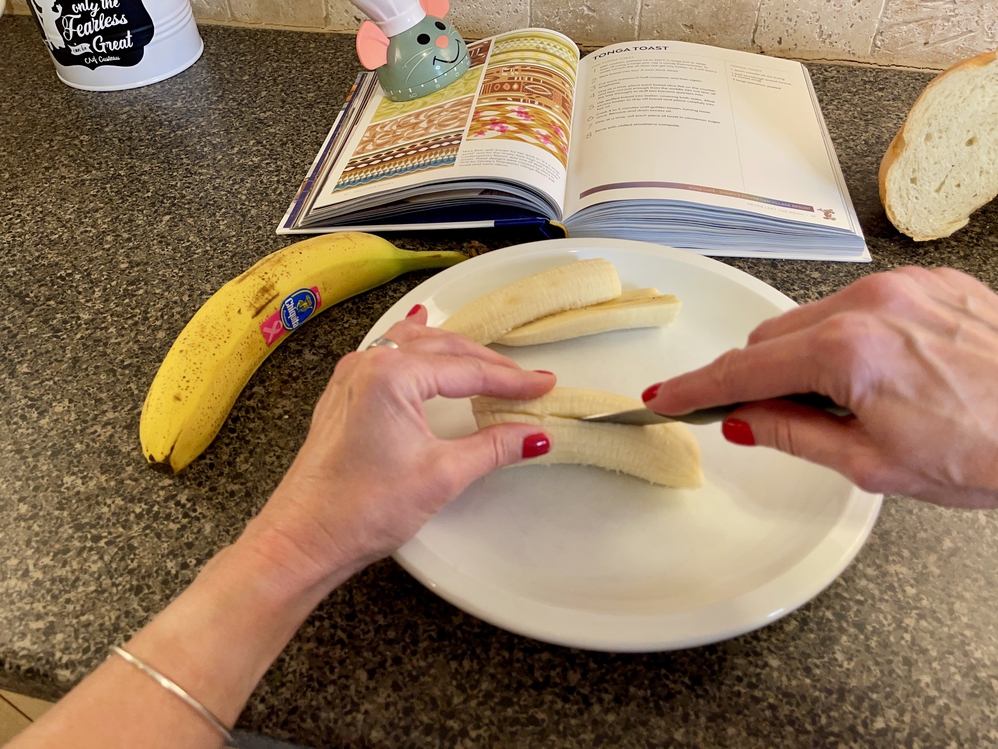 I cut a banana in half and then sliced the halves into quarters and placed two of the quarters into the well that I made in the bread. 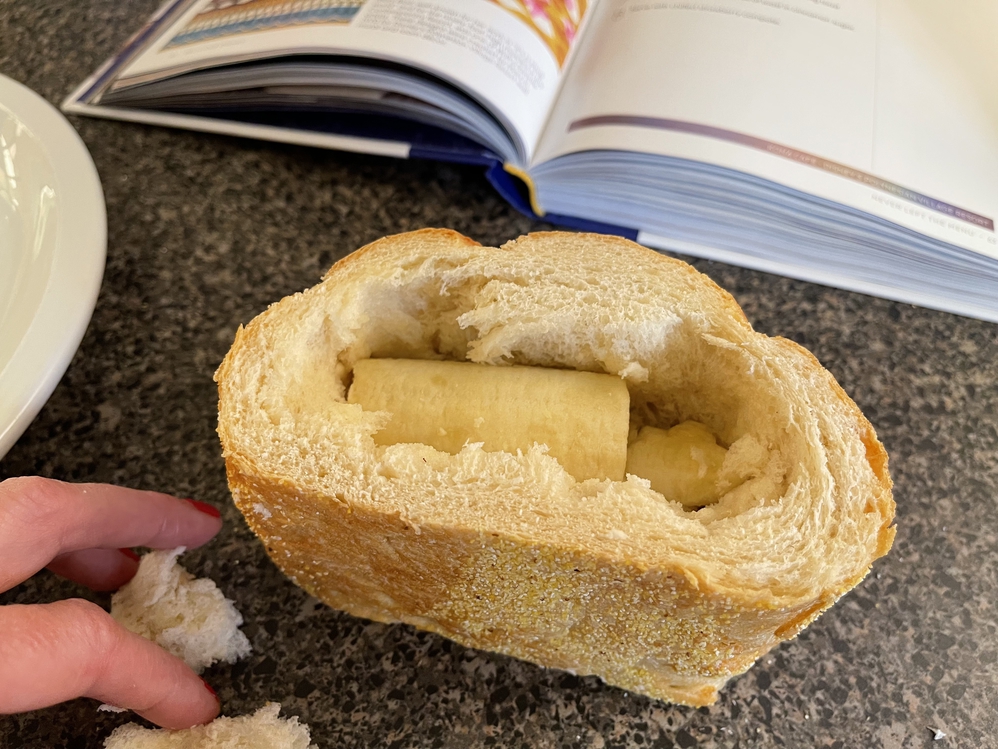 It became apparent very quickly that you and I should adjust the amount of banana that we use if our loaf isn’t exactly as big or as rectangular as the in-restaurant version. It only makes sense that we should use less bananas for a smaller piece of bread. I decided to go with just slightly less than the required amount. 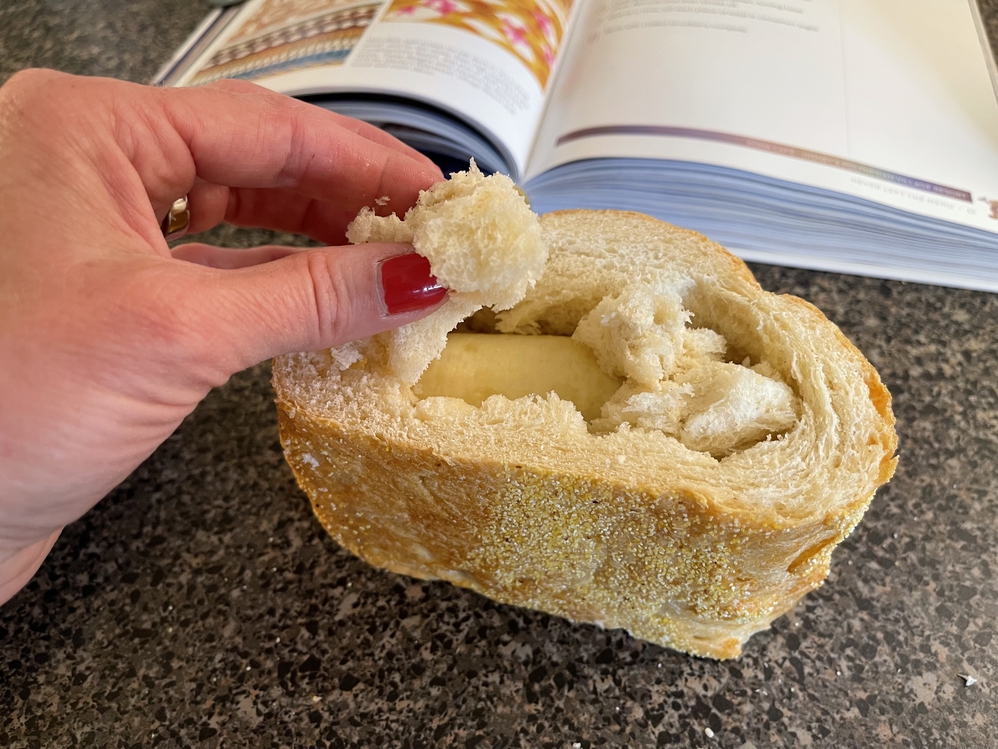 Once the bananas are inside of the bread, you and I are left with a bit of a gaping hole and without direction as to what to do about it. On a trip through the kitchen, my husband suggested filling in the hole with some of the bread that I had taken out, and I figured that it was worth a shot. I’m so glad that I did because it allowed the batter to grab hold in that area. Without it, I’m not sure what would’ve happened, but I have a feeling it would’ve resulted in floating fried bananas because they weren’t about to stay in that slice of bread once I put it into the pot of hot oil. 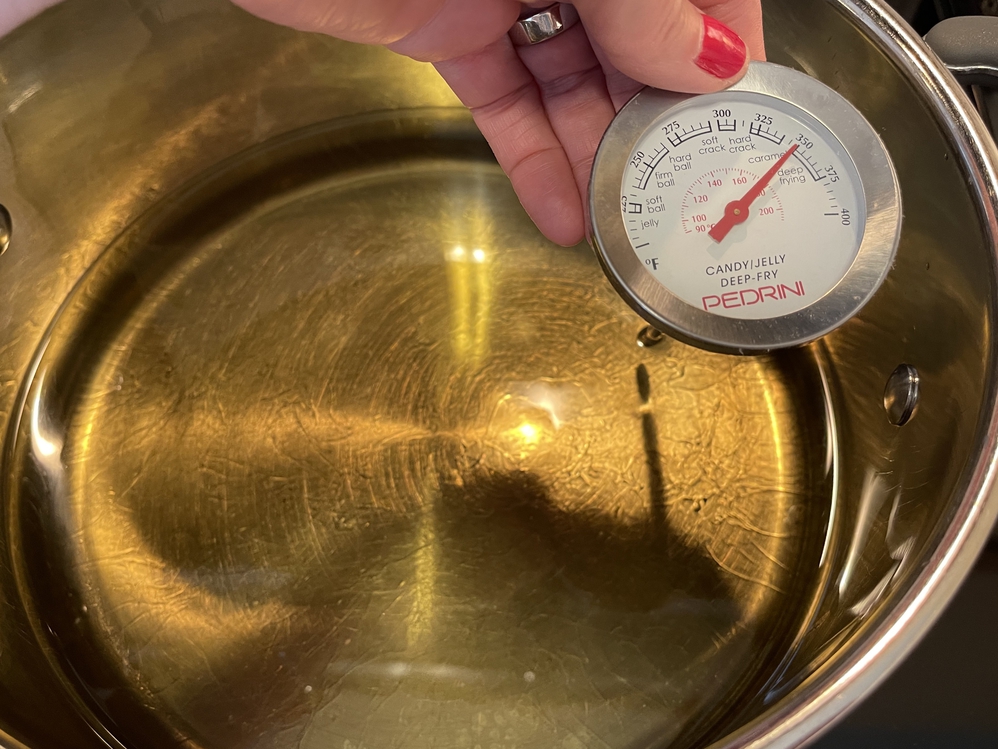 Speaking of the hot oil, this is the time that you and I are to bring a quart of canola oil up to 350° in order to fry our Tonga Toast. I decided to use vegetable oil because it was what I had on hand, and I tried as best I could to keep a sharp eye on that oil. 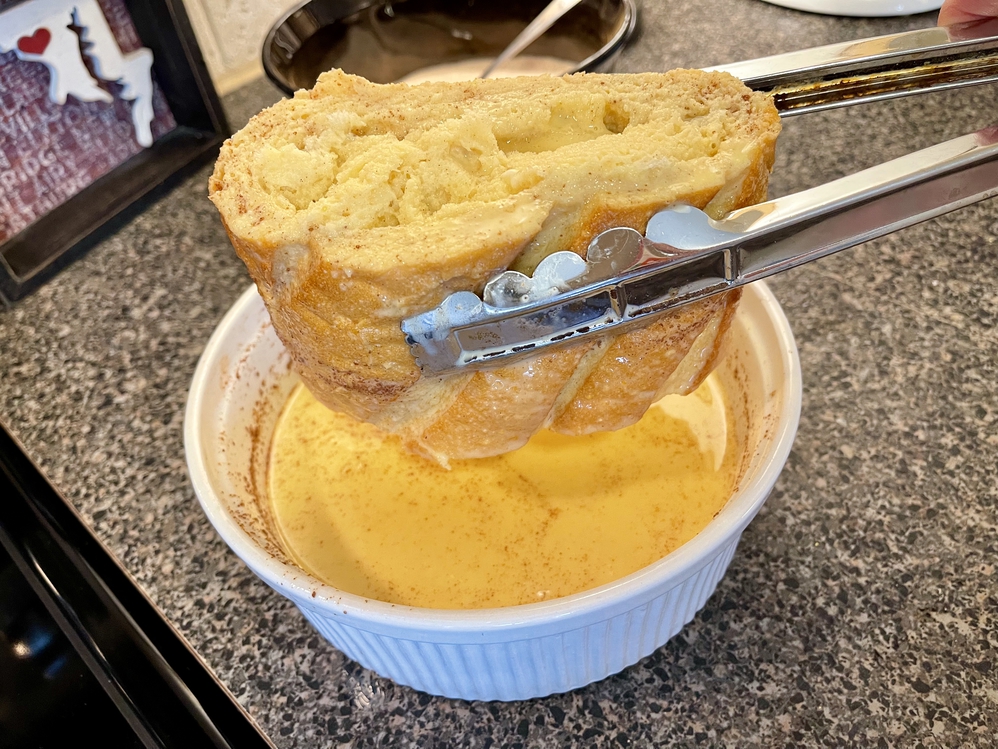 Once the oil got up to 350°, I gingerly dunked all sides of my piece of toast into the batter and then placed it into the pot of hot oil. The recipe asks that we use a large pot or deep fryer for this, and I chose my large pot that had a nice, thick bottom to it. 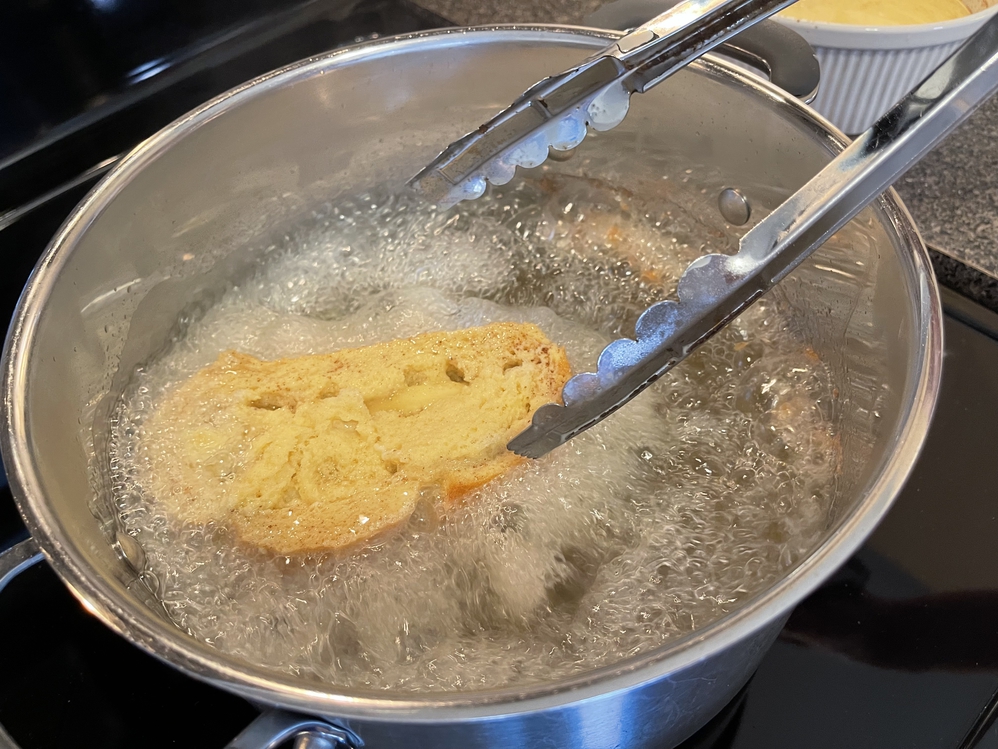 Unfortunately, unbeknownst to me, my oil’s temperature had risen above 350° and that first side that hit the oil got a little bit more done than I wanted it to.

I turned down the heat, and oh so carefully turned over my piece of Tonga Toast. The toast is so heavy that it pretty much sat on the bottom of the pot, but I made sure with tongs to keep it there because I didn’t want the banana or pieces of bread falling out. It turns out that everything was just fine. Once that coating of batter was fried, everything was sealed up nicely. 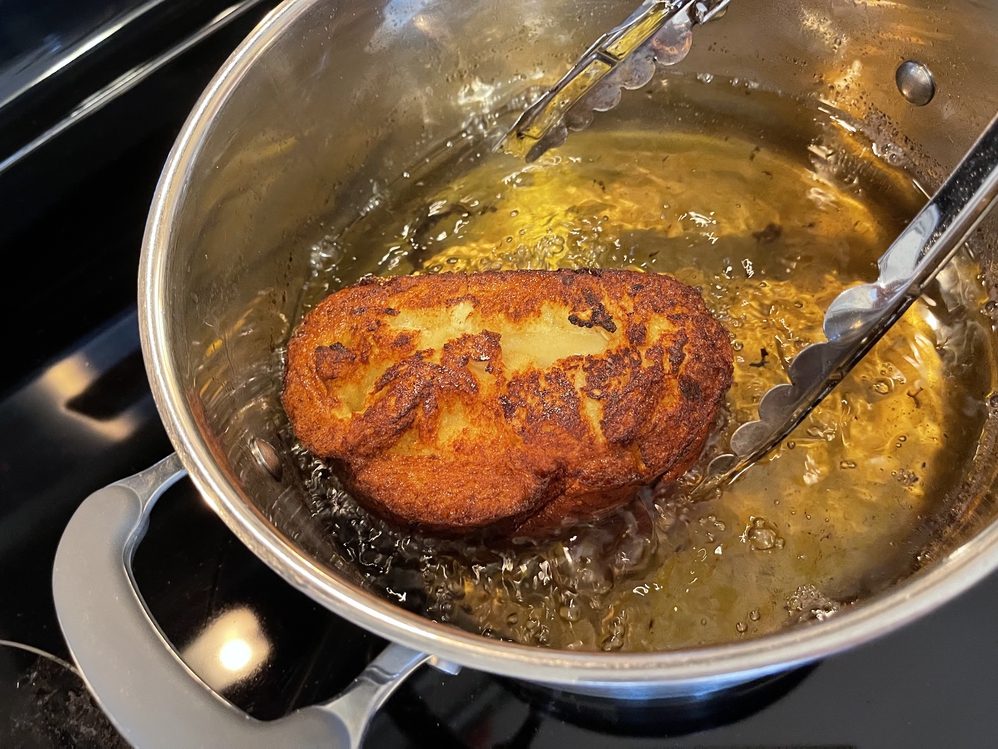 I knocked the heat down a bit, and the second side of the toast came out perfectly. 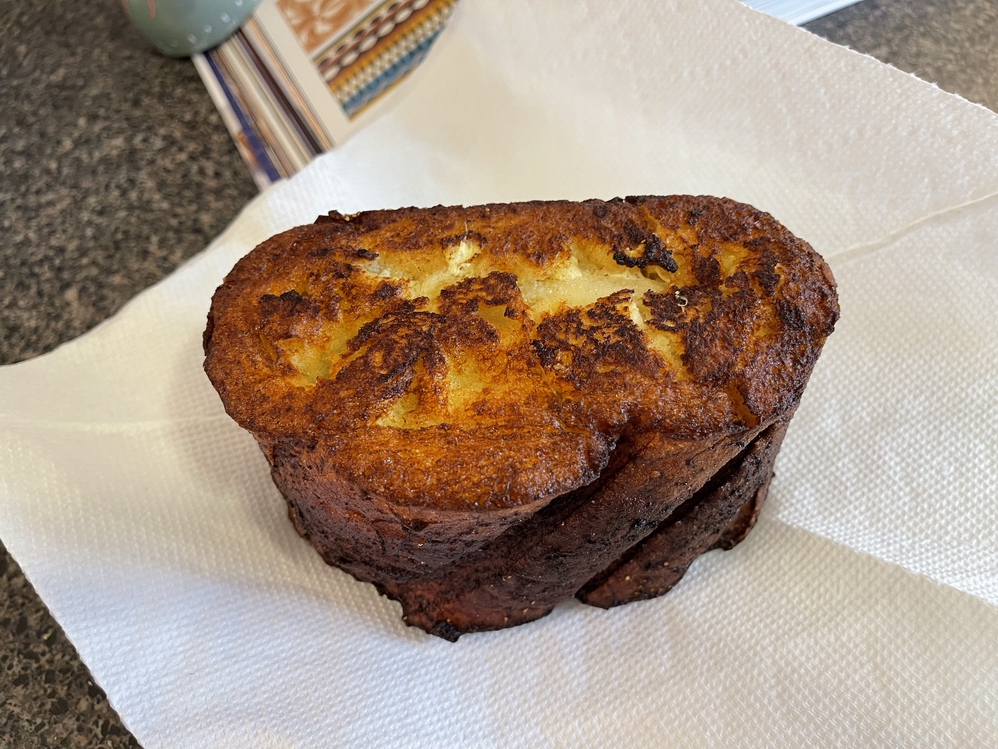 Once your toast is as brown as you like it to be (which the recipe says should take 4 to 5 minutes), pull it out of the oil and place it on a paper towel-lined plate to drain. 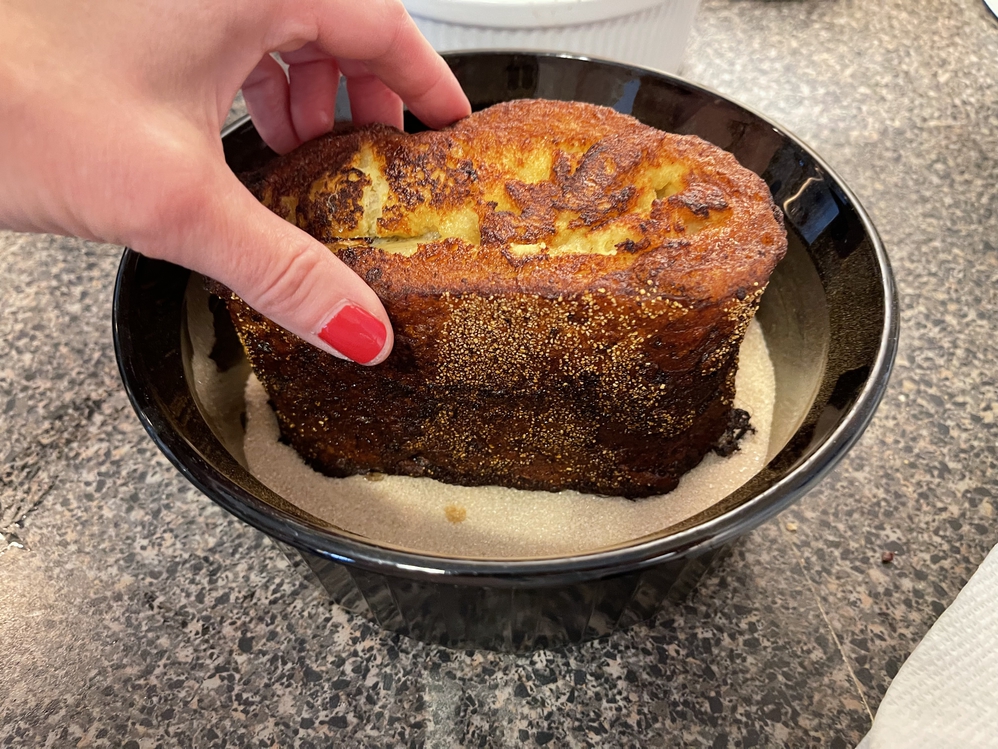 After I allowed the toast to drain for a minute or two, I rolled all sides in the cinnamon sugar coating that I had made earlier and placed it on a fresh plate. And I declared it done. It was a massive hunk of French toast. And it looked so good. 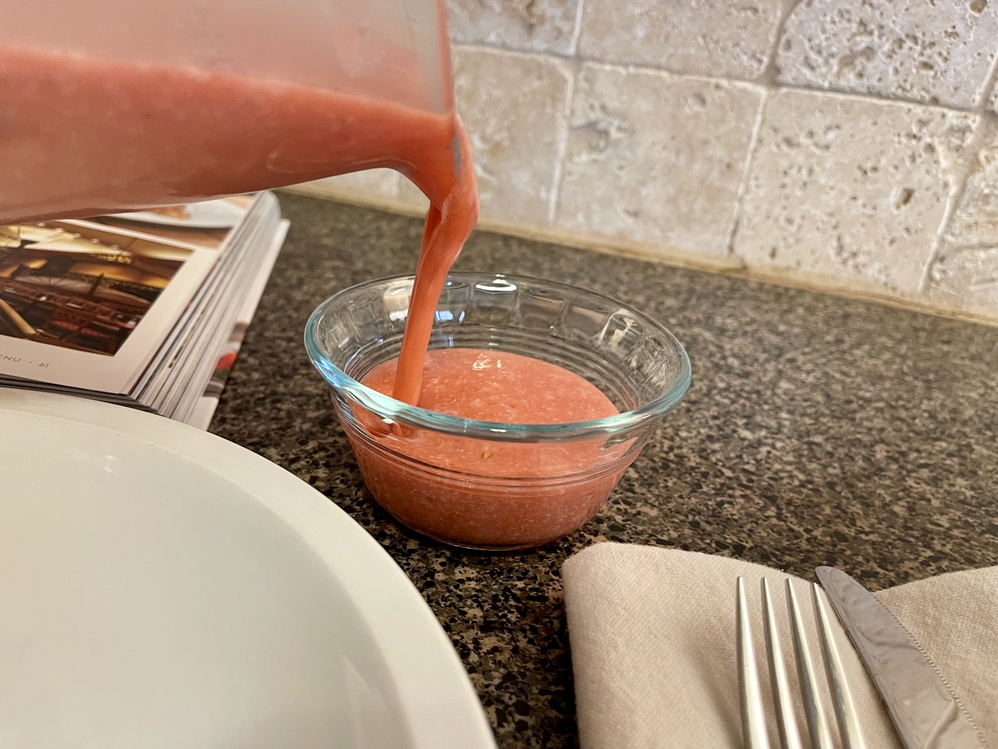 Of course, my Tonga Toast was incomplete without a ramekin filled with that delicious strawberry compote sitting next to it. I pulled the compote out of the fridge, poured a generous serving into a ramekin, and prepared to dig in. 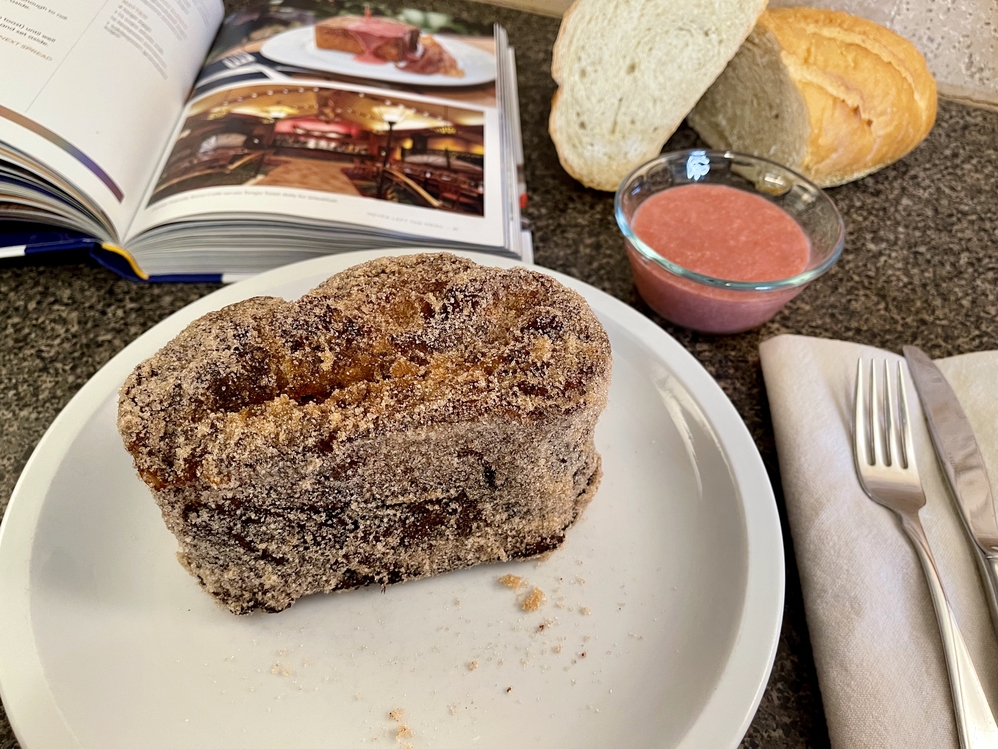 Let me just start with giving a little love to the strawberry compote. Friends, this sauce can do no wrong. It can go on literally anything and make it better. It’s so sweet and fresh and bright. I have a bunch left over in the fridge as I write this, and I have no idea what I’m going to do with it, but I simply must use it for something. 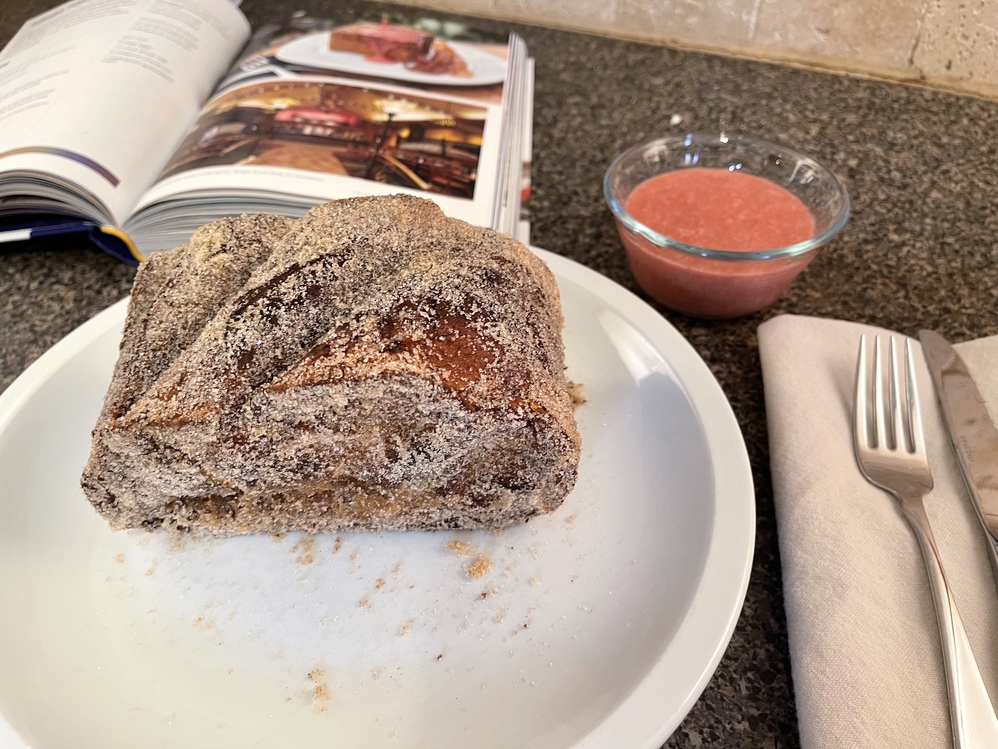 The Tonga Toast? So good. Toasty and sweet on the outside and soft and warm on the inside. The bananas had heated up nicely, and everything was just really great. I was so happy! 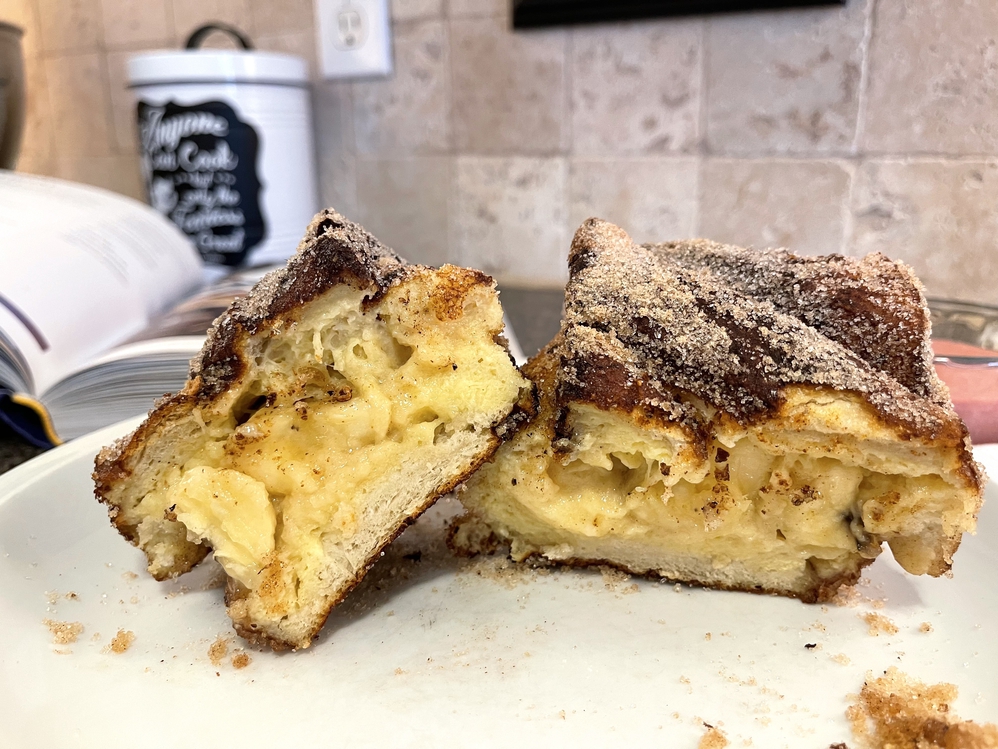 Before placing the the toast in the hot oil, I was a bit nervous about making sure that the batter had completely covered the banana side of things, so I spooned a bit of batter over that side. Doing so allowed a bit of batter to get into the middle of the toast, which wouldn’t normally happen in-restaurant, but aside from that, this was very close to what I’ve had at Kona Café in the past.

Be ye warned: objects in these pictures are larger than they appear to be. You might think that a 3-inch chunk of bread isn’t going to amount to a very large slice of toast, but trust me, it is. 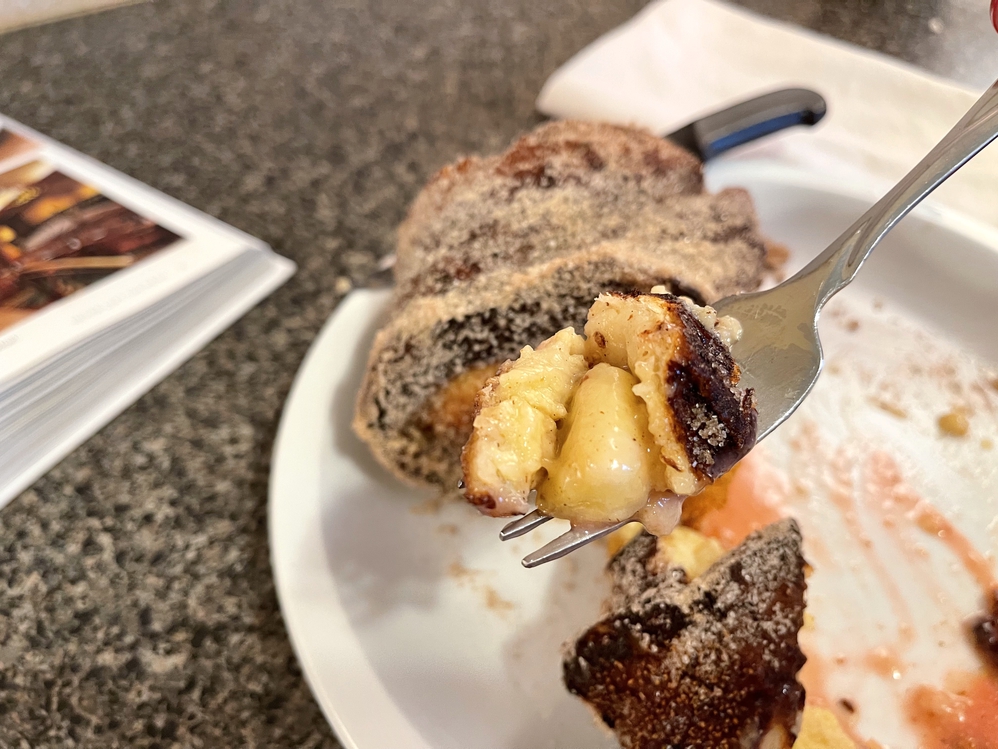 The next time that I make Tonga Toast, I will be taking a knife to the bread to cut out the well for the banana slices. I will also definitely use less bananas, and I’ll place a nice, flat slice of bread back onto the top. I’ll also play it super conservative with the oil to make sure that that first side doesn’t get overly brown. But all in all, it’s just what I thought it would be. Great job, everyone! We did it!

It was so much fun to finally give Tonga Toast a whirl for Saturday Snacks. Like I said, I didn’t want to do it without the recipe for the strawberry compote, but if syrup is more your jam, just use that. And powdered sugar sprinkled on top? Sure, why not? More sugar is always better, right?

Whatever your weekend holds, I hope that it has moments filled with incredible sweetness, just like today’s Tonga Toast. You deserve it.

Thank you so much for reading. I am so grateful for you.

Ready to give Disney’s Polynesian Resort’s iconic Tonga Toast a try in your own kitchen? The recipe is below:

It’s like a rite of passage for Walt Disney World guests to try the Tonga Toast at Disney’s Polynesian Village Resort. Featured at the Coral Isle Café when the resort opened on October 1, 1971, the breakfast treat is now served at KONA CAFÉ. The newest version adds a strawberry compote.

FOR STRAWBERRY COMPOTE
Combine strawberries, coconut milk, and sugar in blender. Blend until smooth. Refrigerate until ready to serve.

FOR CINNAMON SUGAR
Mix sugar and cinnamon in medium bowl (large enough to roll
toast) with a fork until thoroughly blended. Set aside.