Today’s snack is cooling on the counter as I write this. I wish that I could convey exactly how AMAZING my house smells right now. Ahhhh. Okay, back to our regularly scheduled program…

I don’t know about you, but I love little known, incredibly random national holidays. I’ll take just about any excuse to celebrate these days (and we all deserve a celebration in the year 2022 if you ask me). Well friends, National Peanut Butter Day was this past Monday, and we’re here to celebrate Saturday Snacks-style.

We’ve made all sorts of snacks from the Disney parks, Disney resorts, and even Disney Cruise Line ‘round these parts over the past almost two years. Today’s snack is a classic one from Disney Cruise Line, and is something that could only be found in Sweet on You. If you’re unfamiliar with this spot, you can find it on the Disney Fantasy. It’s the most divine all things sweet shop that constantly pumps out gelato, ice cream, and baked good creations. It’s amazing. So when my eyes landed again on the recipe for the shop’s Peanut Butter Blondie Bars, I knew we had to make them. Don’t ask me why I’ve skipped this recipe in the past (perhaps it was the nuts used in the blondie bars…you know I’d rather not sully my baked goods with those things), but we’re not letting it pass us by again. 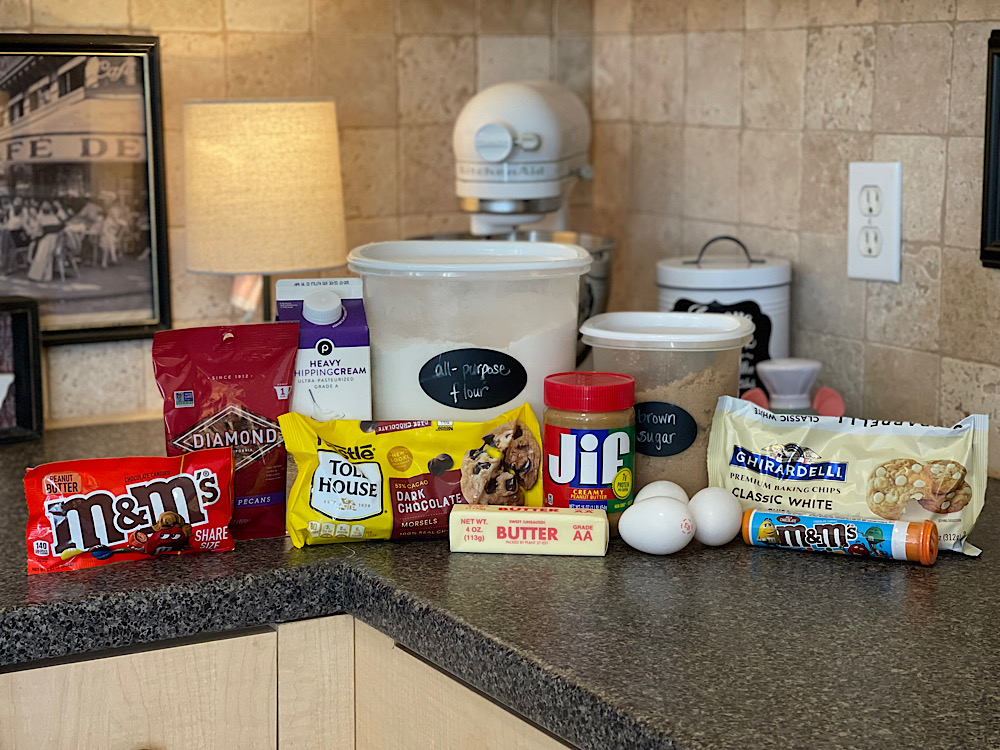 The list of ingredients is short and simple. I picked up a bag of white chocolate chips, two bags of dark chocolate, a small bag of chopped pecans, and a fresh pint of my dearest friend, heavy whipping cream. We’ll be constructing a simple chocolate ganache out of the dark chocolate and cream to top the blondie bars. In the shops aboard the DCL ships, the blondie bars are topped with perfectly-sized chocolate discs, and since we’re likely not to have those at home, the chefs have added that we can choose any candy we’d like to garnish our treats. After surveying the choices in the checkout line, I chose mini M&M’S and Peanut Butter M&M’S. You do you and have fun figuring out what to top your bars with. And may this be the most difficult decision that you and I have to make this weekend.

If I’m being honest, the inclusion of white chocolate chips in the blondies threw me. I’m not a regular blondie maker, so perhaps they’re a standard thing, but it just caught me by surprise. And can we all just agree that life is just a bit better with a jar of peanut butter in the pantry? We can debate creamy vs. crunchy another day; for now, we’ll be unified in our love of the stuff. 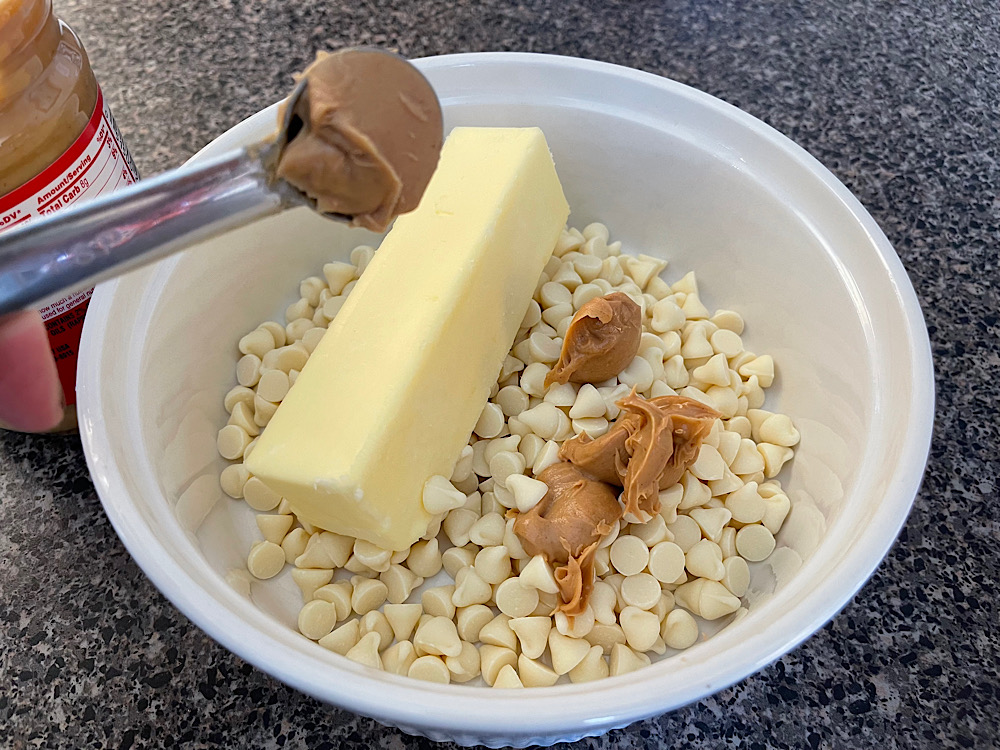 Our first step in assembling the blondie bars is to melt 1 cup of white chocolate chips, 1 stick of unsalted butter, and 4 teaspoons of creamy peanut butter. Unfortunately, the recipe doesn’t say how we’re to go about melting these three, so I decided to melt them in the microwave.

I zapped them for 60 seconds and then stirred and stirred until the three ingredients transformed into what can only be described as liquid magic. Please, for the love of all things sweet, take a taste of that concoction and you’ll witness for yourself how incredible those white chocolate chips, that peanut butter, and that stick of butter are. Just heavenly. 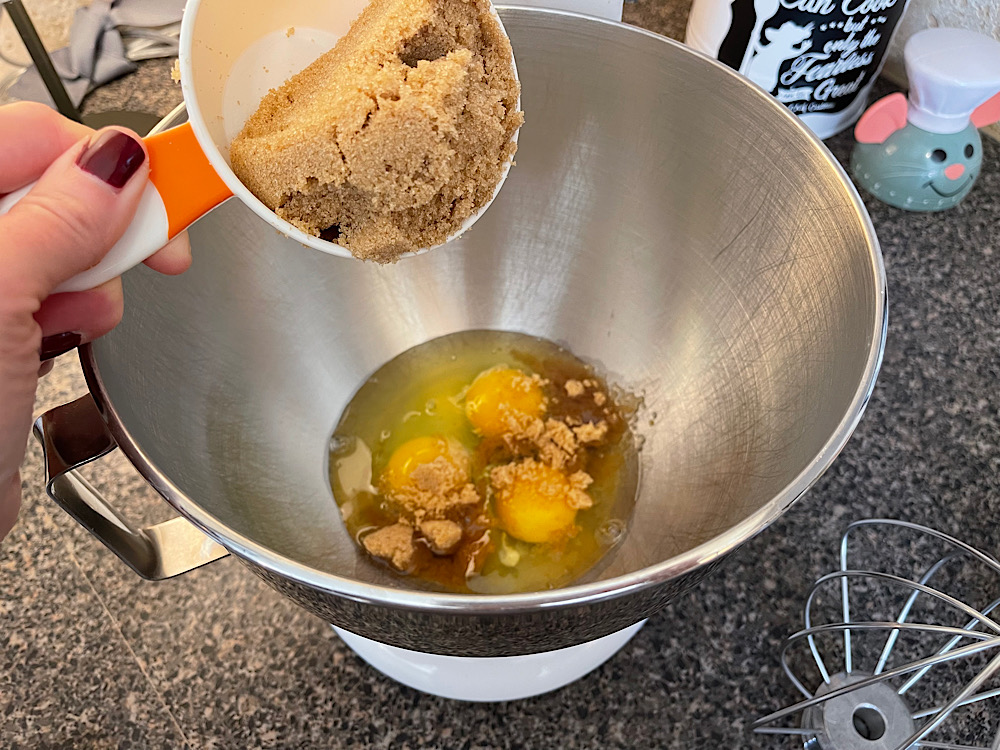 In the bowl of my stand mixer with whisk attachment in place, I placed three eggs and a cup of brown sugar. If you don’t have a stand mixer, your biggest mixing bowl and hand mixer will do the trick. We need to whisk the eggs and brown sugar until they become a thicker consistency. 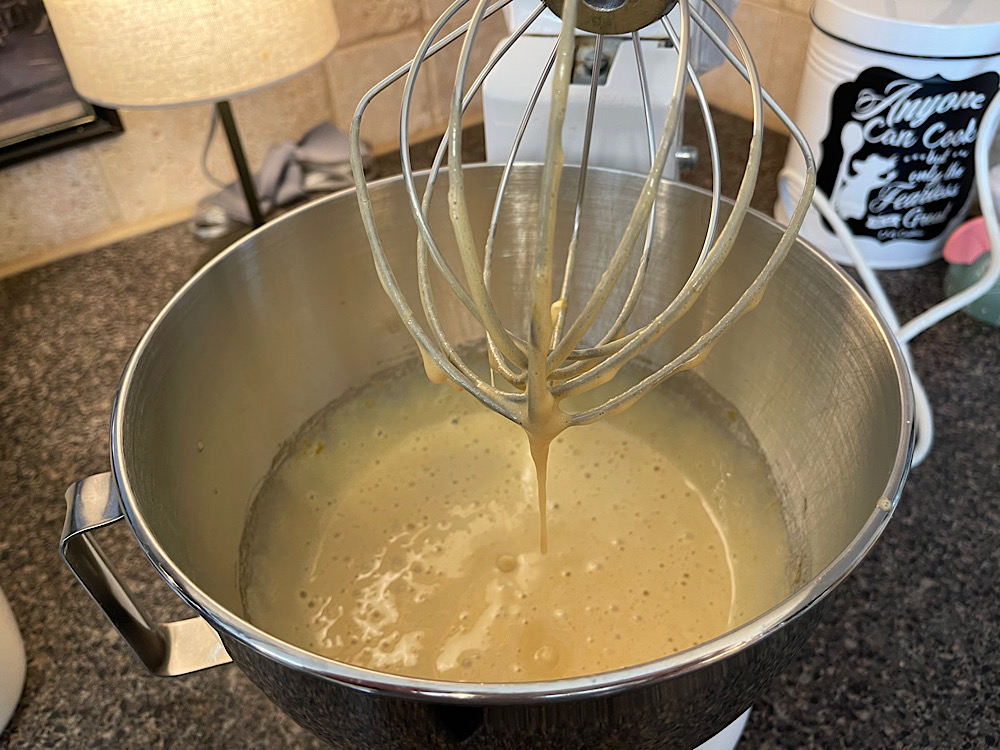 I started the speed off slower, but cranked it to medium-high when it become apparent that the mixture wasn’t getting any thicker. The higher speed (and a few minutes) did the trick. 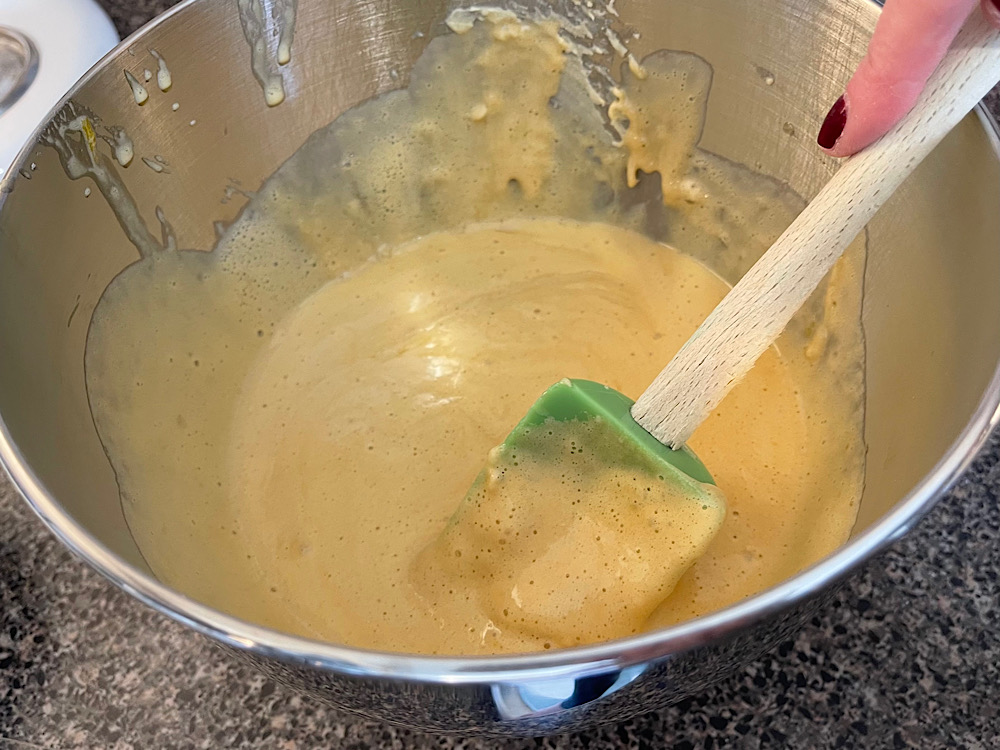 Our next step is to add the chocolate mixture to the eggs and brown sugar by hand. We now channel our best Schitt’s Creek and fold the two together with the turn of a spoon. I found out that I let the chocolate and peanut butter mixture cool just a bit too much, and it was tough to combine. When I make the bars again, I’ll be sure to keep that stuff warm and smooth.

Our next step calls for us to add 1 1/4 cup of seived flour to the egg and brown sugar mixture. If you’ve been hanging out here for a bit, you know that I would rather do anything else other than sieve flour. It just takes too long. I grabbed my favorite whisk and gave the flour a very good whisking to break everything up.

I added the whisked flour, along with 1/4 cup of chopped pecans, to the stand mixer bowl and folded them in by hand.

Once the batter ingredients have combined completely, it’s time for you and I to pour that batter into a pan and pop it in the oven. This is the point at which things came to a small screeching halt. You see, like the recipe left out exactly how best to melt the first three ingredients, it also left out which size pan/baking sheet to use for the blondie bars. Whaaaaat?! The pan size is a pretty big deal. 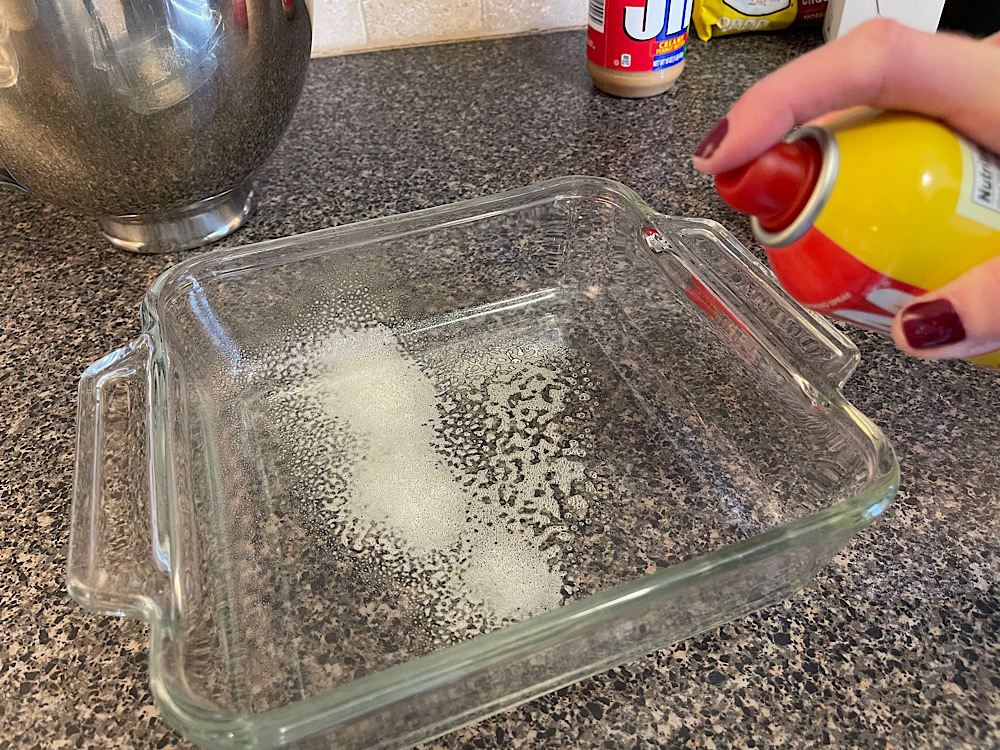 I stopped and consulted the picture that accompanies the recipe and surveyed the pans in my cabinet, and decided to go with an 8×8-inch Pyrex dish. Yes, the bars would be a bit on the thick side, but I was worried that if I went with my 9×13” pan or a baking sheet, the bars would end up too thin and would burn. I’d rather have baked goods that are a tad thicker and moist than ones that are thin and crispy. 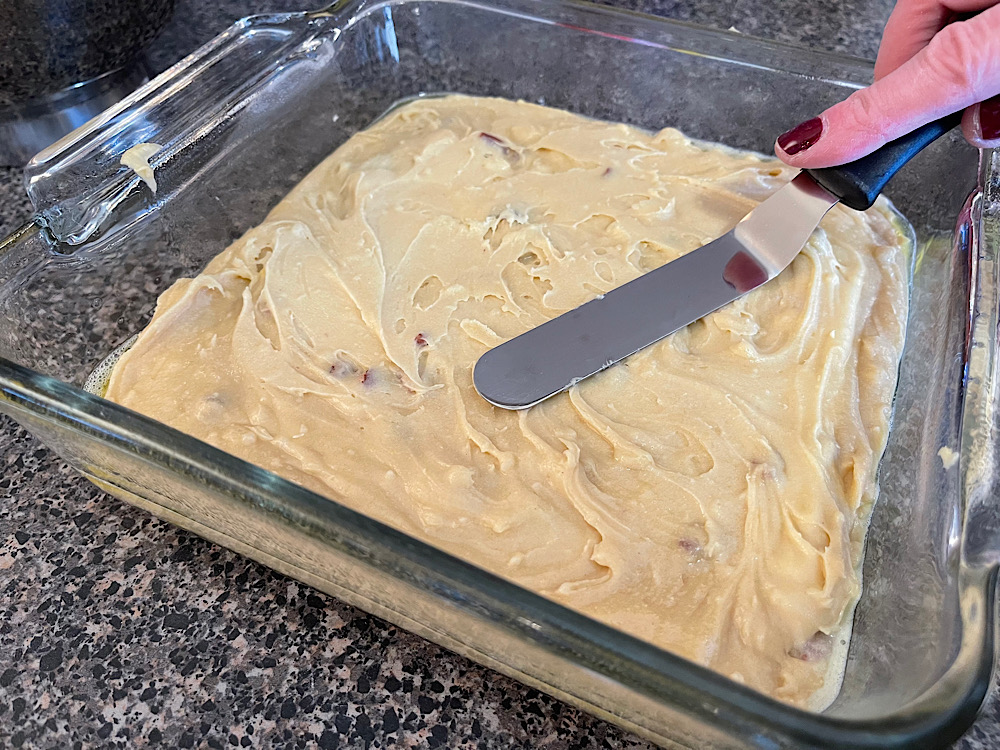 I sprayed my 8×8 with non-stick spray and loaded the batter into the dish. I placed the dish in the oven and set the timer for 40 minutes. The recipe says it should take around 45 minutes, and I like to try to check things a bit ahead of schedule. 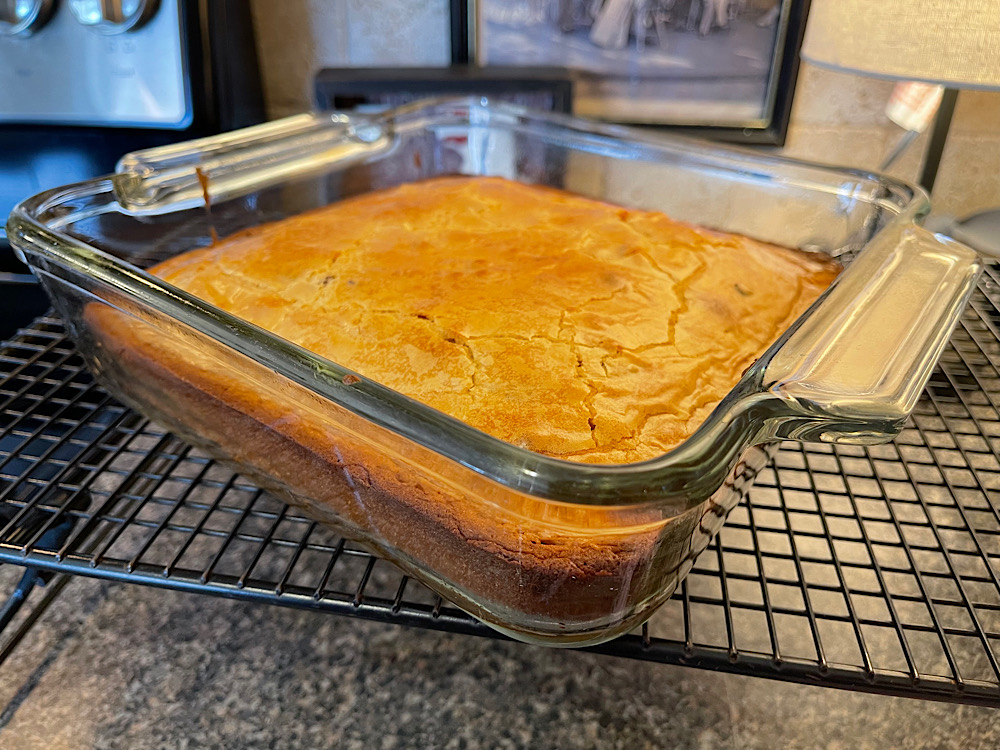 After 40 minutes, the blondie bars had puffed up and were golden brown. I pulled the pan from the oven to let them cool as per the recipe. We’re asked to use a 2 1/2-inch round cookie cutter to cut out the blondies once they’ve cooled. I began the process of sorting through my cabinets and measuring random round things to see if they came close to the required 2 1/2 inches since I don’t have what’s called for. Two things came close: a mini mason jar and my 2020 Flower & Garden Festival Orange Bird glass. They would have to do.

When the blondies reached the point at which they were close to cool, I poured a cup of heavy whipping cream into a small saucepan and brought it up to just before a boil. I also poured 2 cups of dark chocolate chips into a separate bowl. Well, truth be told, I poured 1 1/2 cups of dark chocolate chips into the bowl because I only purchased one bag of chips instead of two. The other 1/2 cups of chips were of the bittersweet variety, and they did just fine. Whew.

Once the cream reaches the desired temp, take it off the heat and pour it over the chocolate chips. And stir. And stir some more. 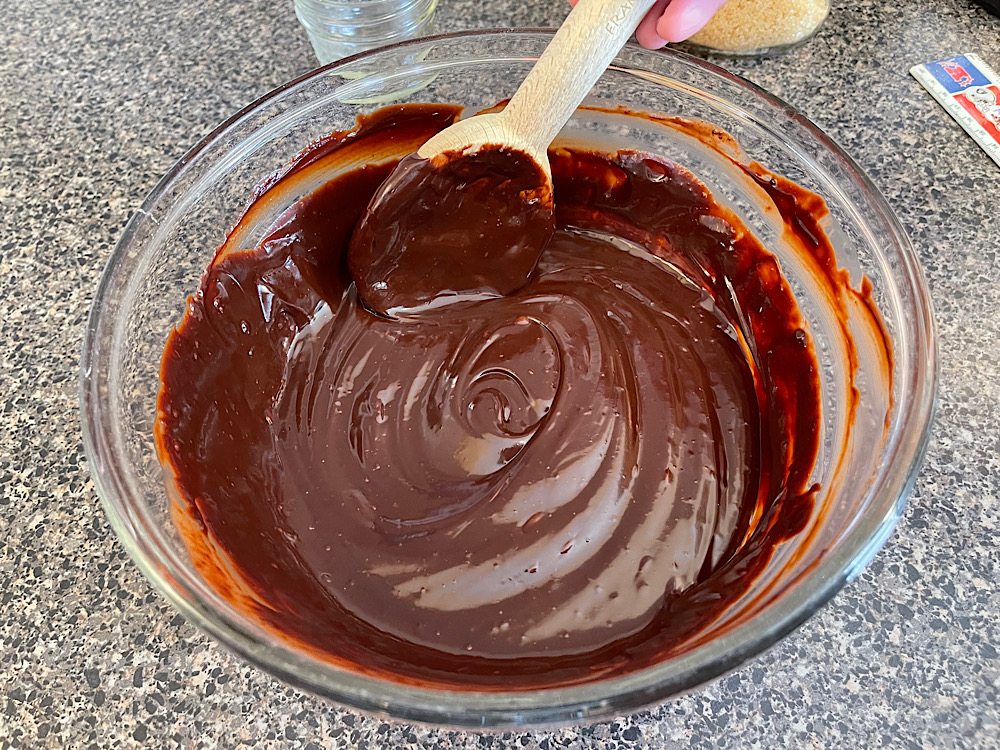 The heat from the cream will melt the chocolate chips and, if you just keep stirring, you’ll end up with the most gloriously glossy chocolate ganache. The recipe calls for us to allow the ganache to cool and beat it a bit before attempting to slather it ALL OVER the tops of the blondie bars. 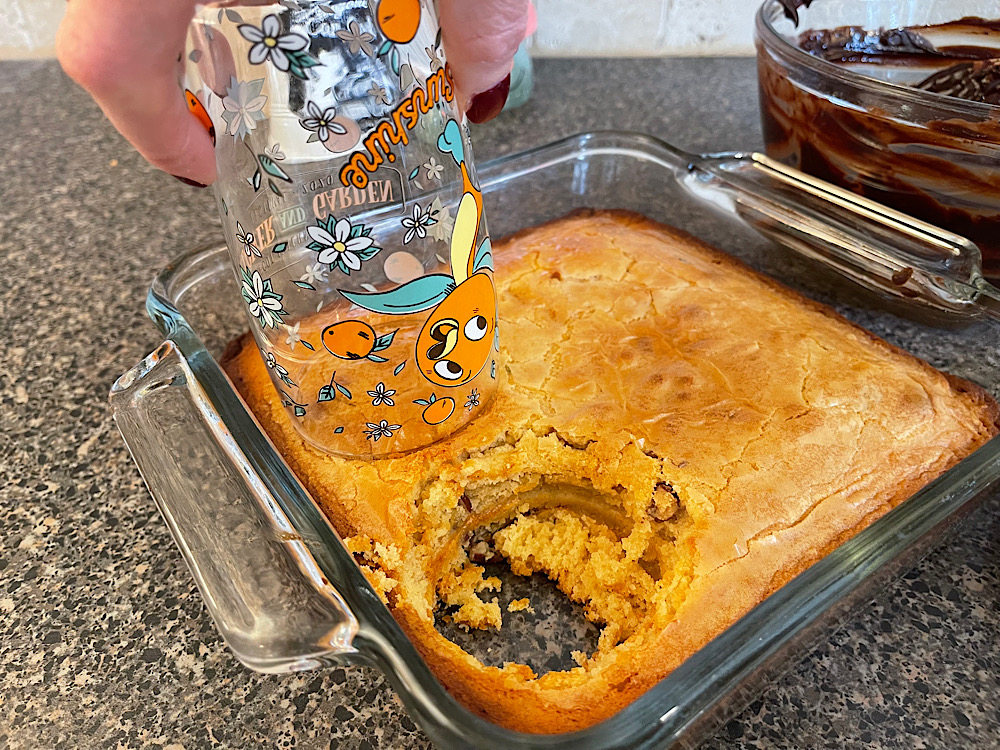 Once the blondies have cooled, take your cookie cutter (or Orange Bird glass, ahem) to them and cut out round little bars. 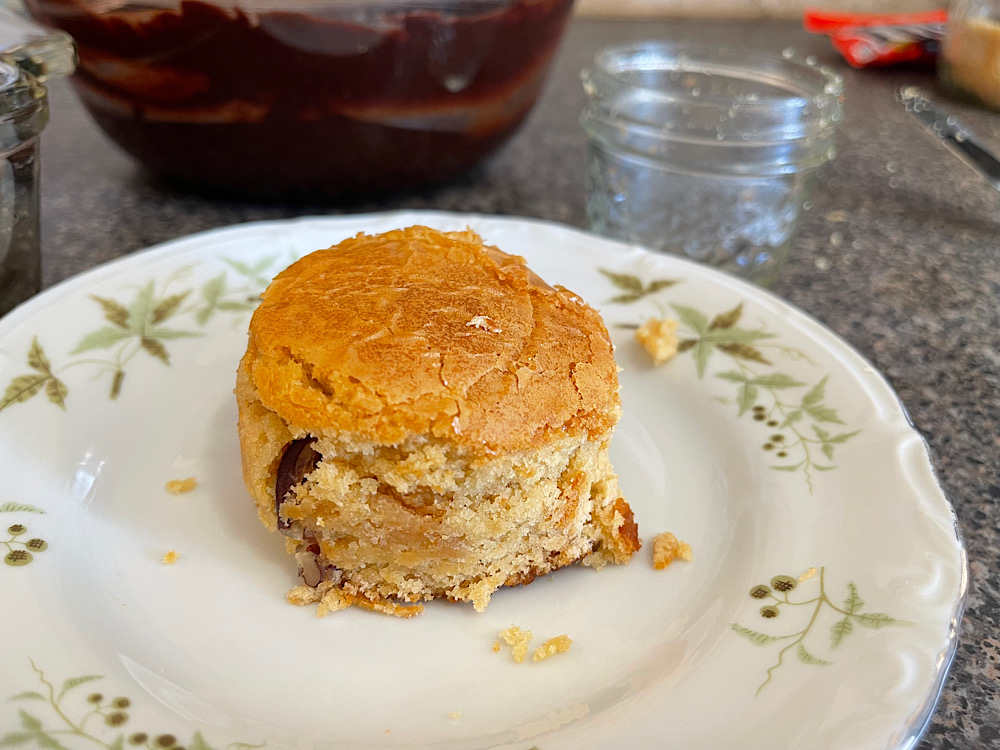 My bars needed to be sweet talked just a bit to slide out of the glass, but they did and they looked goooood. 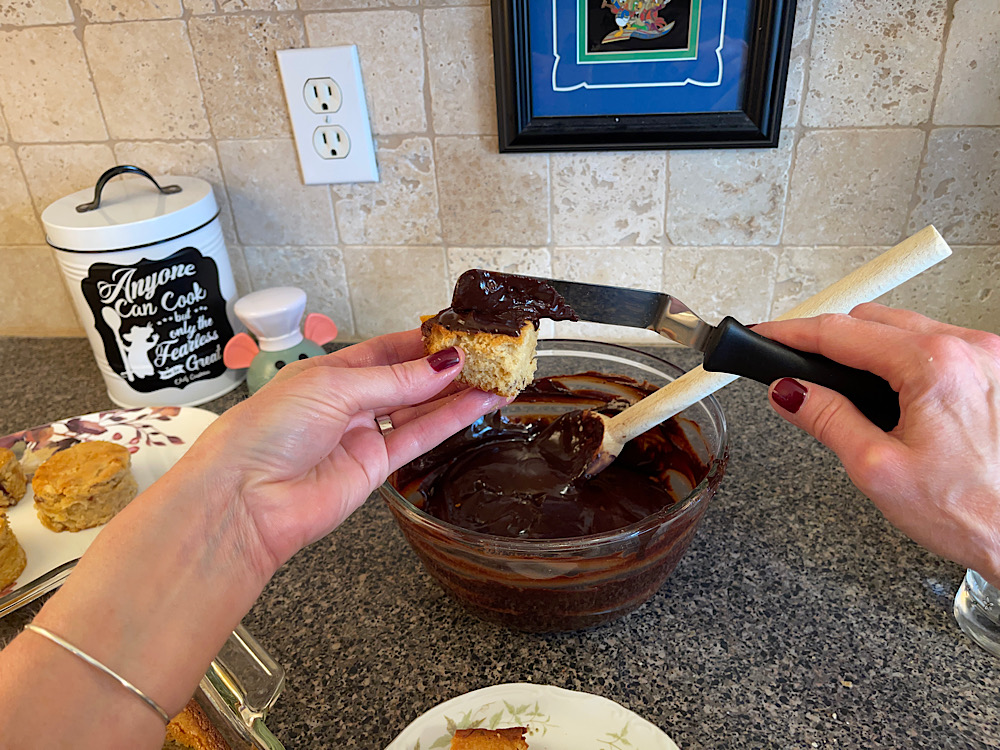 When the ganache was almost cool (y’all know I’m not waiting a minute longer than I absolutely have to), I took my offset spatula and slathered a generous amount on top of each one. And the leftover portions of blondie in the pan? I cut them into small petit fours and topped them with ganache, too. No blondie left behind, friends. 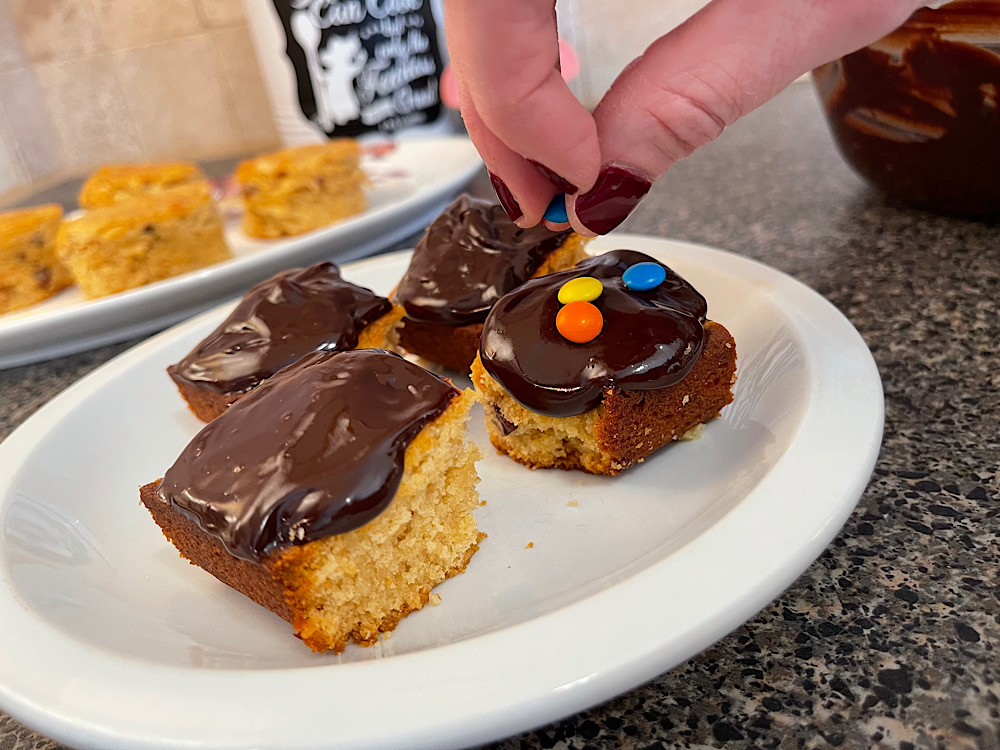 I also topped each bar with either mini M&M’S or Peanut Butter M&M’S and stood back to survey my work. And I promptly took a large bite of my work. Holy cow. Yep, DCL chefs, you may have left a few directions out of your recipe, but know what you’re doing. 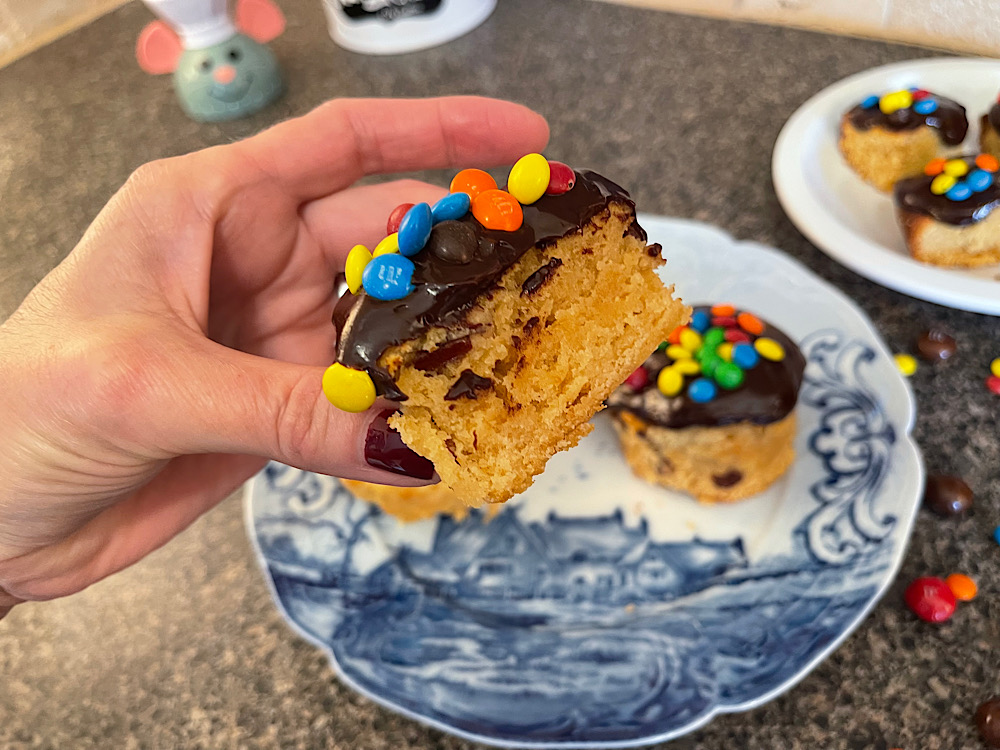 The blondie bars were incredibly good. Soft and just shy of fully done, they were everything that I wanted them to be, and frankly, more. They were more moist than I initially expected them to be, and those chopped pecans that I somewhat begrudgingly added in weren’t a bad thing after all. 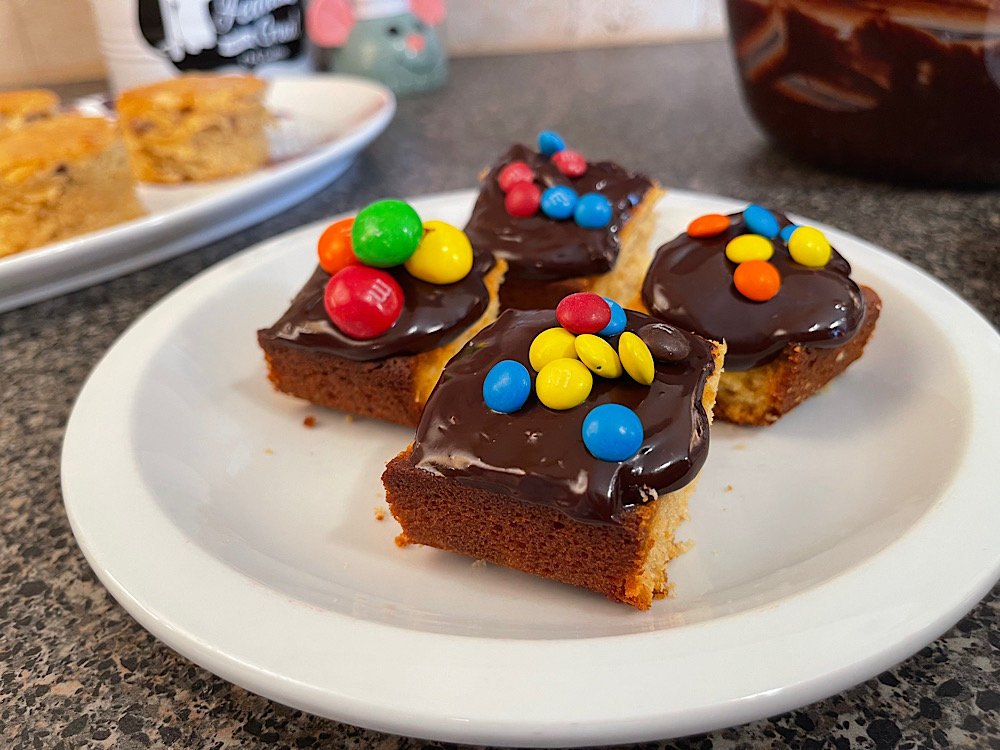 These little babies are so yummy, and are the perfect thing to nibble on in honor of National Peanut Butter Day. Or in honor of a January Saturday. Or any day at all. 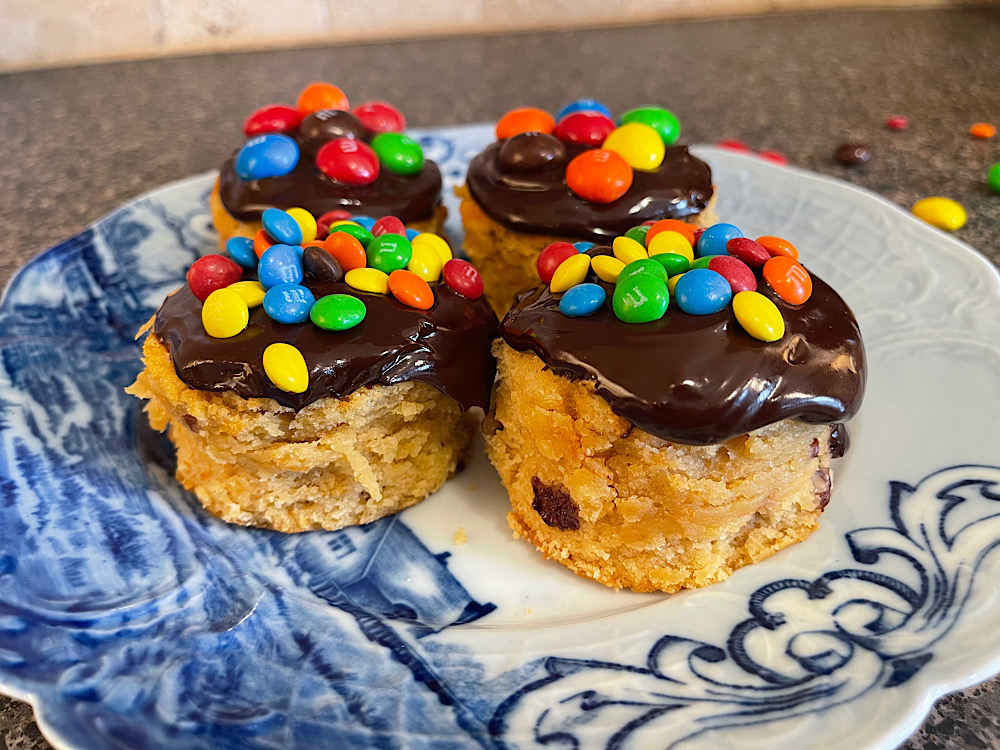 Whatever’s on your slate this weekend, I hope that you’ll make time to celebrate the small things. We’re in this together, and we’re surrounded by celebrations both big and small if we stop to look for them. One of my biggest celebrations? You coming by to read this. Thank you for giving of your time. I am forever grateful for you.

1. Preheat oven to 350 degrees F.
2. Melt the [white] chocolate, peanut butter and butter.
3. Whisk the eggs and brown sugar with an electric mixer until thickened. Fold the chocolate mixture into the whisked eggs.
4. Fold the sieved flour and pecans into the chocolate mixture. Pour the mixture into a baking tray and spread out evenly. Place in the oven to bake for approximately 45 minutes.
5. Once the brownies are cool, cut out with a 2.5 inch cookie cutter.
6. For the ganache, heat the heavy cream over the stove until just reaching boiling point. Pour the hot cream over the dark chocolate and stir in until the chocolate has melted.
7. Once cool, beat the ganache before piping on top of each brownie. Decorate with your choice of candy.