I’m still in a California state of mind after Sunday’s Super Bowl and halftime show. Let’s share a little California love this week as we turn our attention to Pacific Wharf Café in Disney California Adventure. And as a side note, can we just agree that any recipe that utilizes sweetened condensed milk is gonna be a good one? Whenever I see that little can of magic on a list of ingredients, I do a little happy dance.

Pacific Wharf Café has a thing for bread pudding. Apparently they feature a new variety each season, with the current offering being Cherry Cheesecake Bread Pudding. Us? We’re playing it old school today and throwing it back to 2019 with Pacific Wharf’s Cookies ‘n Cream Bread Pudding. We made Raglan Road’s bread and butter pudding last year for a Saturday Snacks installment, and if I was to give out an award for Most Surprising Recipe, Raglan’s dessert would be among the nominees. It was both incredibly good and incredibly easy to make, which is the perfect storm for a Disney recipe if you ask me. 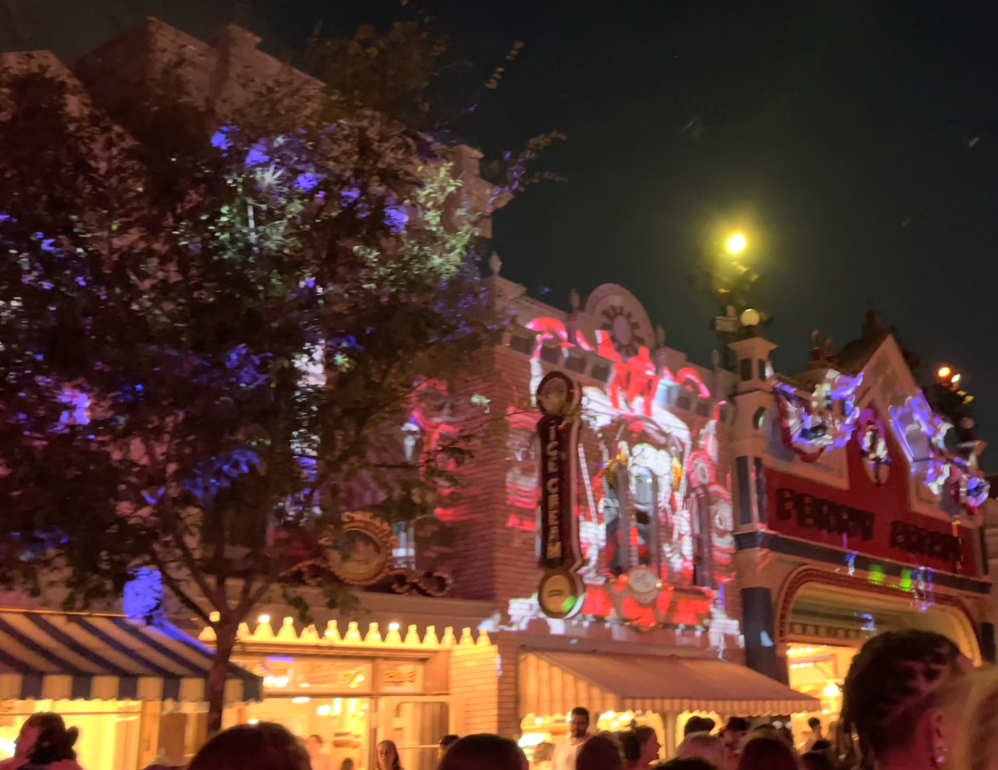 The Cookies ‘n Cream Bread Pudding first made an appearance during the Get Your Ears On Celebration, which saw the arrival of Mickey’s Mix Magic to Disneyland Park. If you have a chance to visit Disneyland and Mickey’s Mix Magic is on the entertainment schedule, I highly recommend making a stop to see the nighttime spectacular. It’s just so much fun. And please stand in the middle of Main Street to view it; those projections are amazing.

I’m new to the bread pudding game. Before I made Raglan’s bread and butter version, I had only had the dish once or twice. Now that I am aware of how very good bread pudding can be? I’m in for life. And if you enjoy Oreo cookies, today’s bread pudding is going to be exactly what you’re looking for in the dessert department.

My first step to creating today’s amazing recipe was to stop by my grocery store’s bakery counter and ask if they had any day-old bread that I could purchase. The bakery team member looked at me as if she was offended when I asked if they had any day-old bread on hand. I explained that it was for a recipe, and she softened her quizzical look but once again said that no, they didn’t have any for sale. I asked for an unsliced loaf of Italian bread, and was on my way. I would need to let that loaf of bread hang out on my counter until the next day. Patience is a virtue, right? 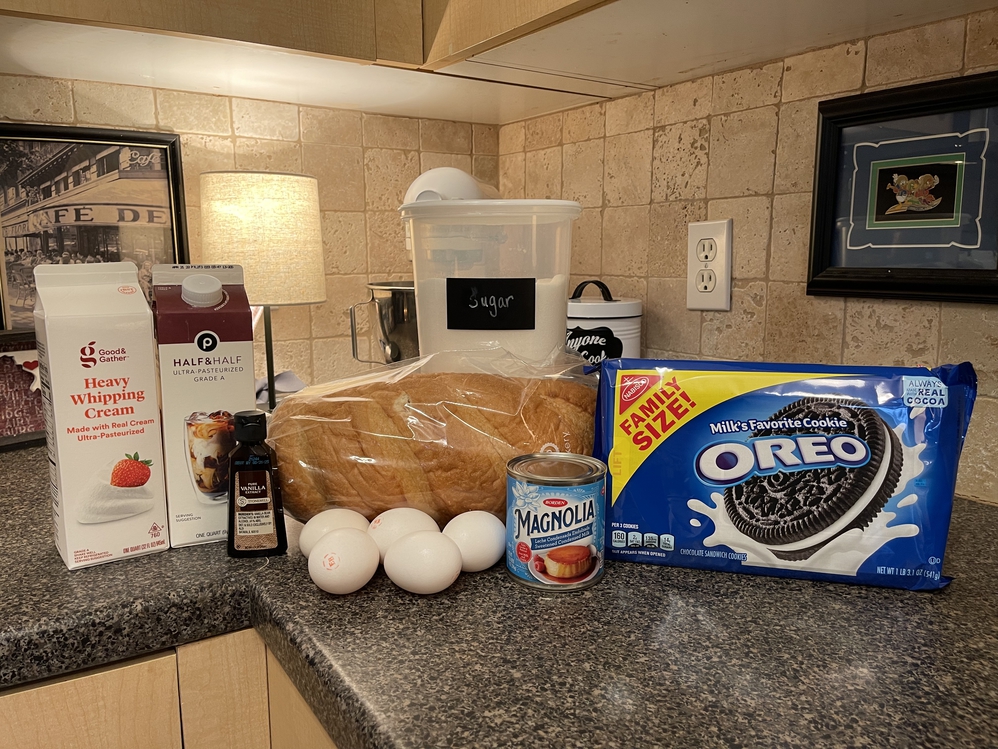 Well, the week went like weeks often do and it was actually two day-old bread by the time I got around to making the Saturday Snacks recipe. The extra day did nothing but help the situation, though; we want that bread to be stale enough to stand up to the custard with which it’s going to be combined.

I took a knife to my loaf of bread and sliced it into 1-inch cubes until the entire loaf was cut. I tossed all of the cubed bread into the largest mixing bowl I have and set it aside. This is the perfect time to preheat your oven to 350° if you haven’t already so. 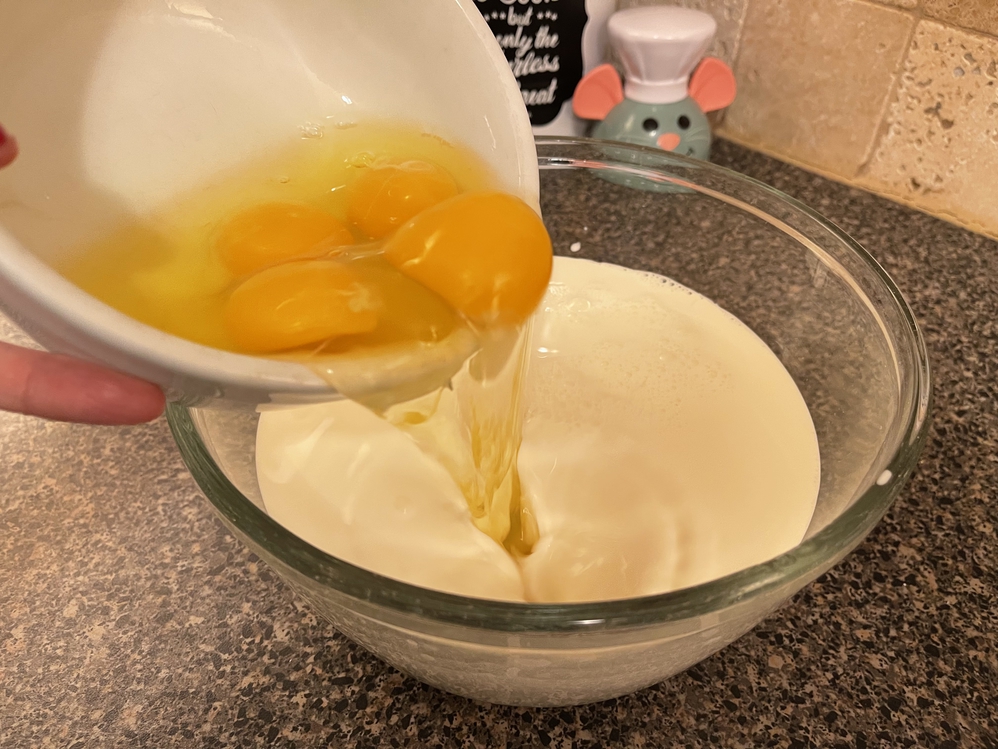 Pacific Wharf Café’s bread pudding recipe has us constructing a custard without the use of a stove top, which in my book is always a good thing. We are to whisk the custard’s ingredients together, and while the recipe doesn’t ask us to use a stand mixer or a handmixer, that’s what I resorted to after realizing that I would be whisking that concoction for days by hand.

My advice to you is to skip trying to whisk it all by hand and go straight for a stand or hand mixer. Into the bowl of your stand mixer, place 5 large eggs, 1 1/2 cups of sugar, 4 cups of half-and-half, and 1 tablespoon of vanilla extract. And, yes, to address the obvious: that is a ton of sugar and gloriously creamy half-and-half. This is only going to benefit our bread pudding. It’s a means to an end, friends. And it’s going to be a very good end. 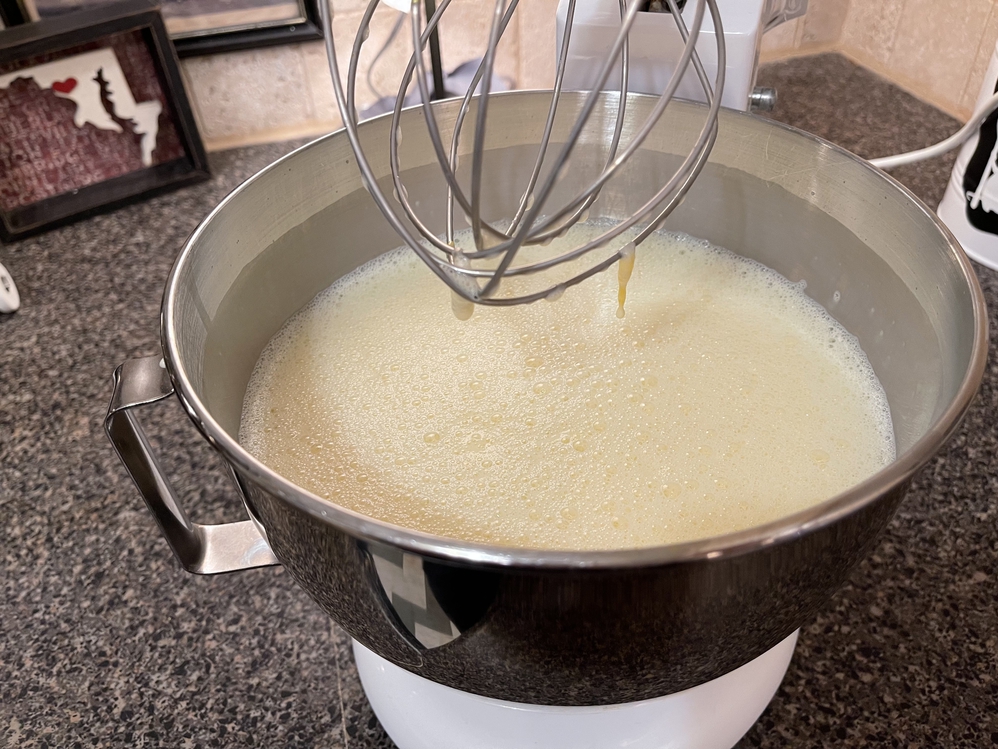 The recipe asks for us to whisk the eggs, sugar, half-and-half, and vanilla until “fluffy.” Ummmm, come again? I’ve heard of mixing wet ingredients until they were foamy or bubbly, but not fluffy. I cranked the mixer to a medium-high level and just let it run for bit to see if it ever got to the point where I would classify it as fluffy. It took 8 minutes on medium-high speed to get to the “fluffy” state. And still then I was a little worried that it was truly what it needed to be. It was more foamy than fluffy, but it would have to do.

The next step has us pouring the entire bowl of custard over the top of the cubed bread, and stirring ever so gently to make sure that the bread is completely coated with the custard.

While the custard-soaked bread sat to rest for the required 15 minutes, I began to prep the Oreo cookies that we need for the next two steps. We need to quarter 24 Oreo cookies, and crush an additional 12 of them. It turns out that quartering Oreo cookies is incredibly easy. Those little babies snap right in half and snap in half again so beautifully. I made short work of making sure that everything was nice and quartered and put all of the bits and pieces into a small bowl.

I then tossed the remaining 12 Oreo cookies into a gallon-sized baggie and crushed them using the handle of a butter knife. This is also known as cheap therapy. You get to take out your pent-up frustration on a bag of cookies and you get to eat those crushed cookies on top of an amazing serving of bread pudding. It’s a win-win. 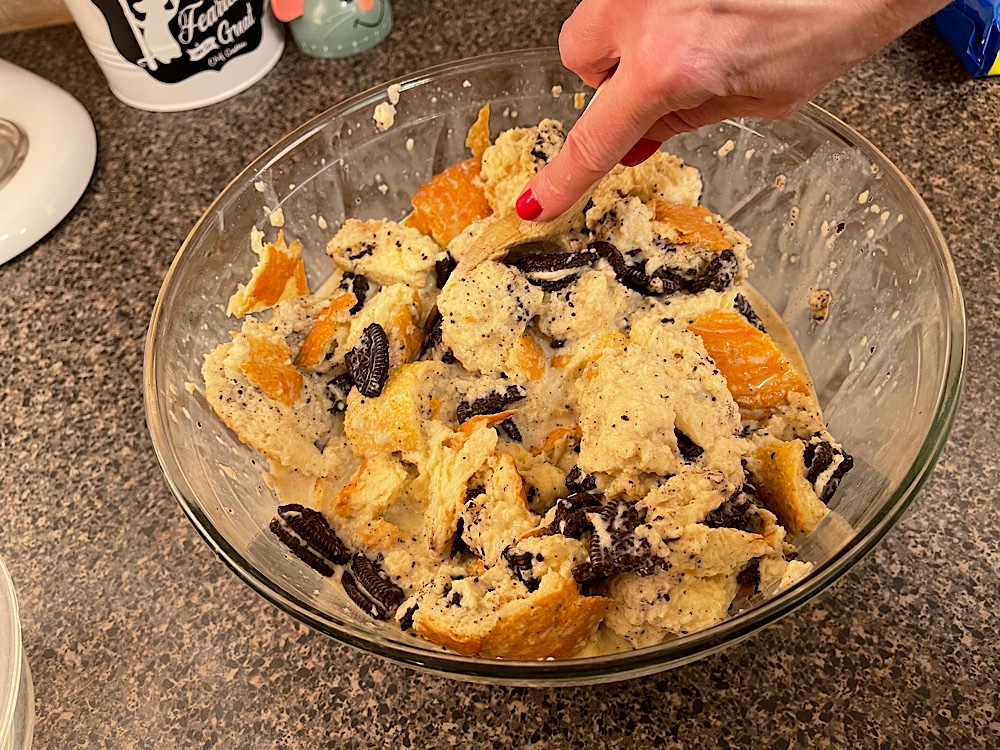 Once the 15 minutes were up, I gently stirred in the quartered chocolate sandwich cookies. Yep, this is where it gets really good. Please give yourself a high-five at this point. You are making an amazing sweet dessert that absolutely everyone with whom you share it will love. 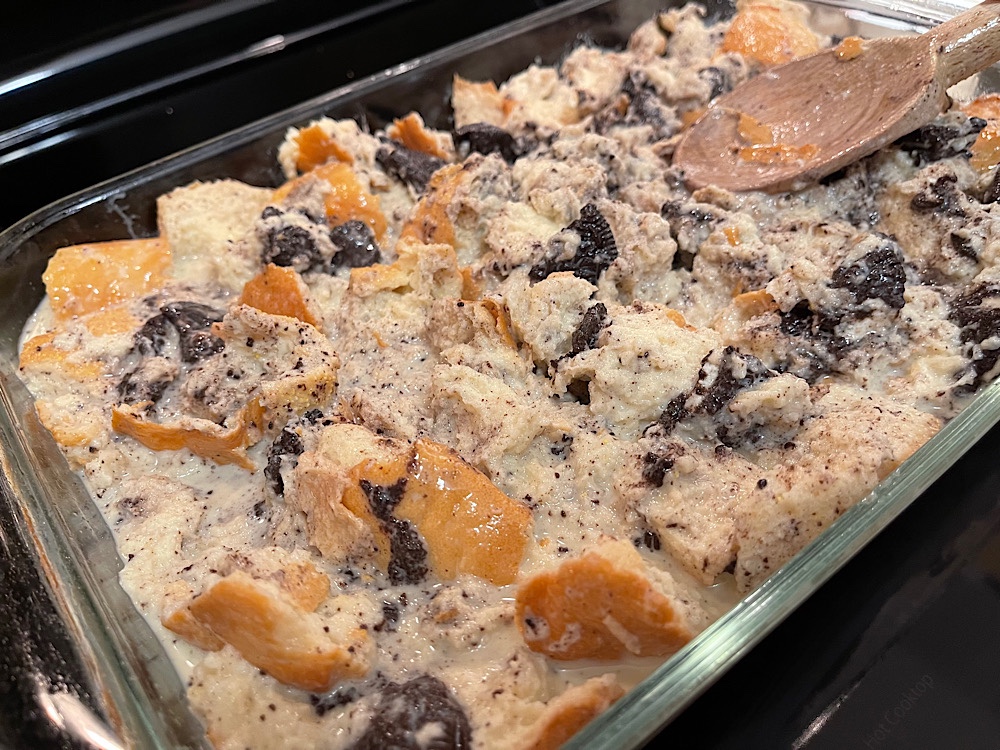 After I had the Oreos completely mixed in, I poured the bread pudding mixture into a 9 x 13 pan that had been coated with spray oil. I made sure everything was nice and even and I popped the pan into the 350° oven. The recipe says that it should take 45 to 50 minutes, so I set the timer for 45 minutes to be able to take a peek at that point. 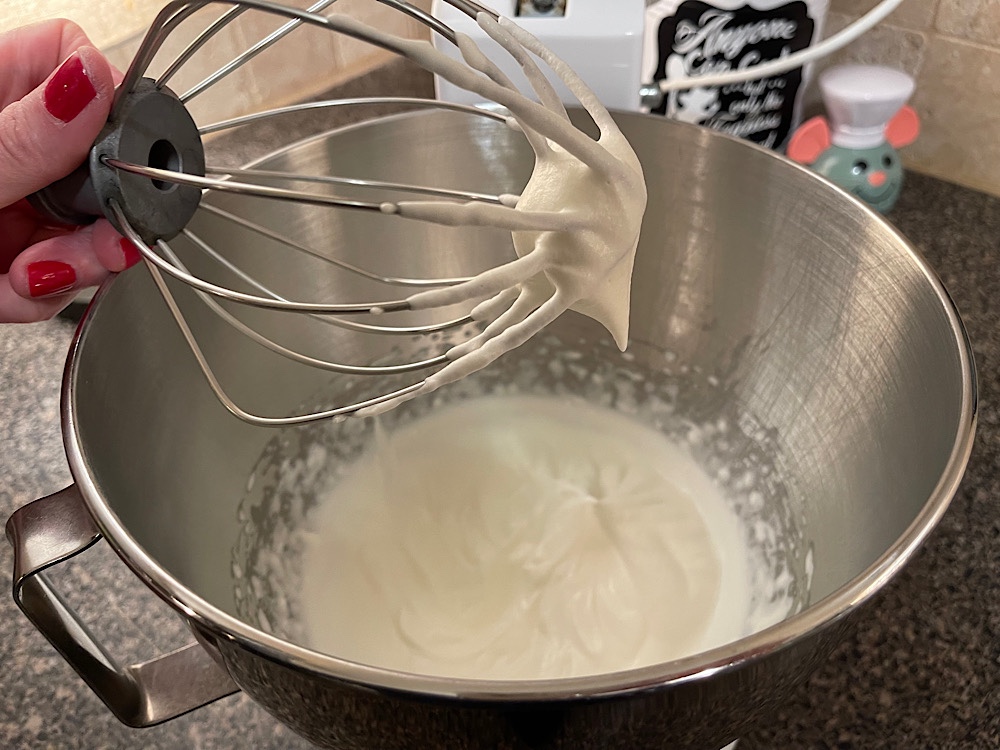 About 35 minutes into the baking time, I washed up my whisk attachment and stand mixer bowl and placed 1/2 of a cup of heavy whipping cream into the bowl. Now’s the perfect time to make the homemade whipped cream that will crown our bread pudding, so pour in that whipping cream and crank up that mixer. The recipe says that you and I should look for medium peaks, which means that the whipping cream will be at a point where a peak will stay as you place it. 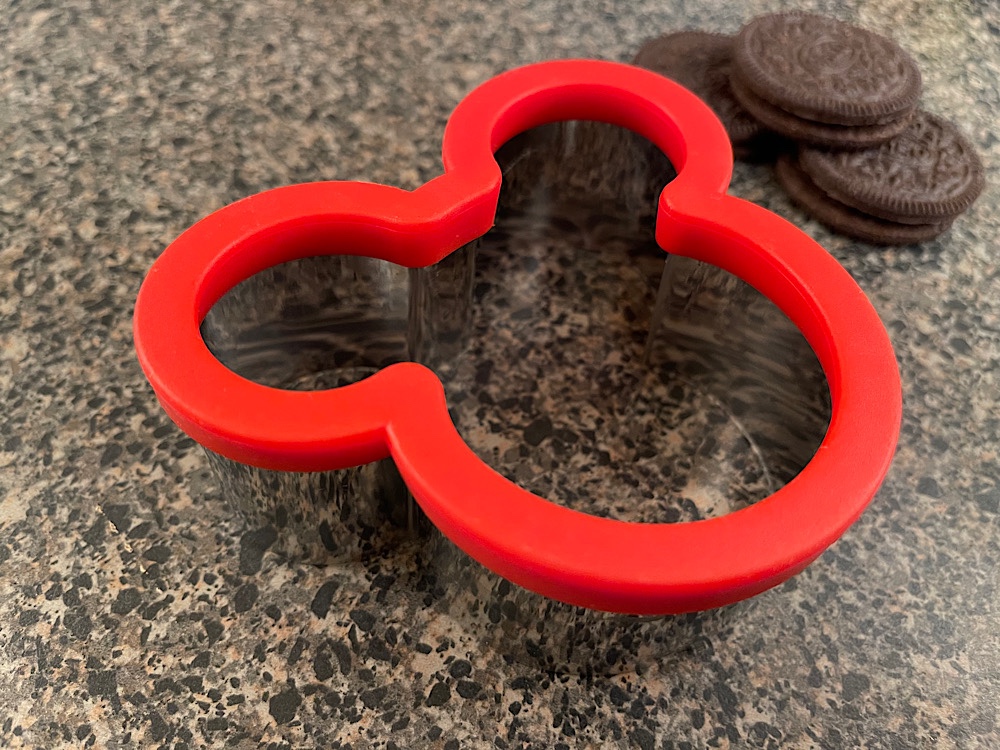 It’s also worth noting that you and I have choices as to how our bread pudding is going to look when we serve it. Pacific Wharf Café served their Cookies n’ Cream Bread Pudding in the shape of Mickey. So if you have a Mickey-shaped cookie cutter on hand, you’re good to go. Thankfully, I had one from one of our recipes last year hanging out in my utensil drawer. That being said, if you decide to serve your bread pudding by the slice or the scoop, you’ll be able to utilize the entire pan of dessert. No bread pudding left behind. 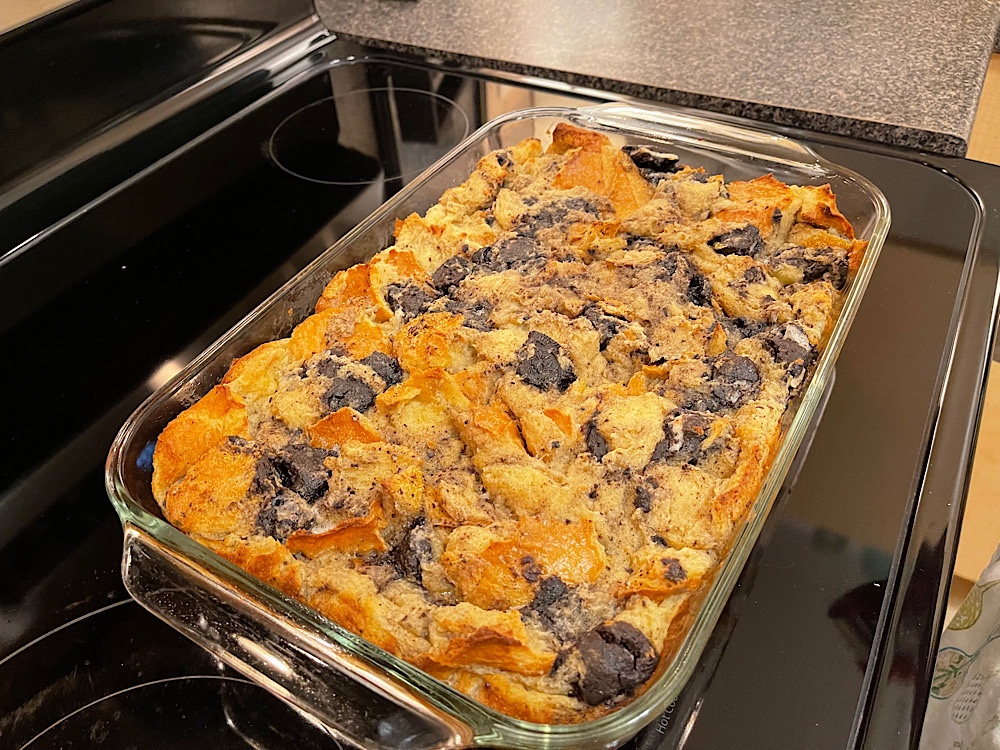 After 45 minutes, what awaited me in the oven was a beautifully golden browned pan of bread pudding that smelled heavenly. No joke: heavenly. We’re supposed to stick a thermometer into the center of the pan and have it read 165°. My bread pudding was indeed the target temp, and I pulled the pan out of the oven and let it rest for 15 minutes as the recipe instructs. 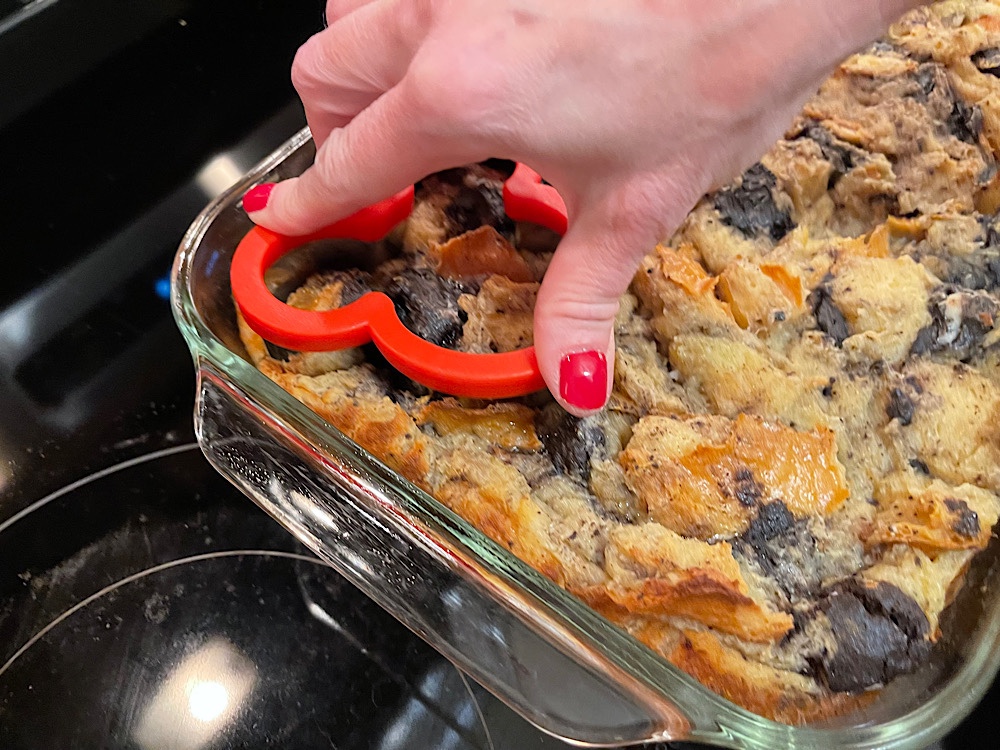 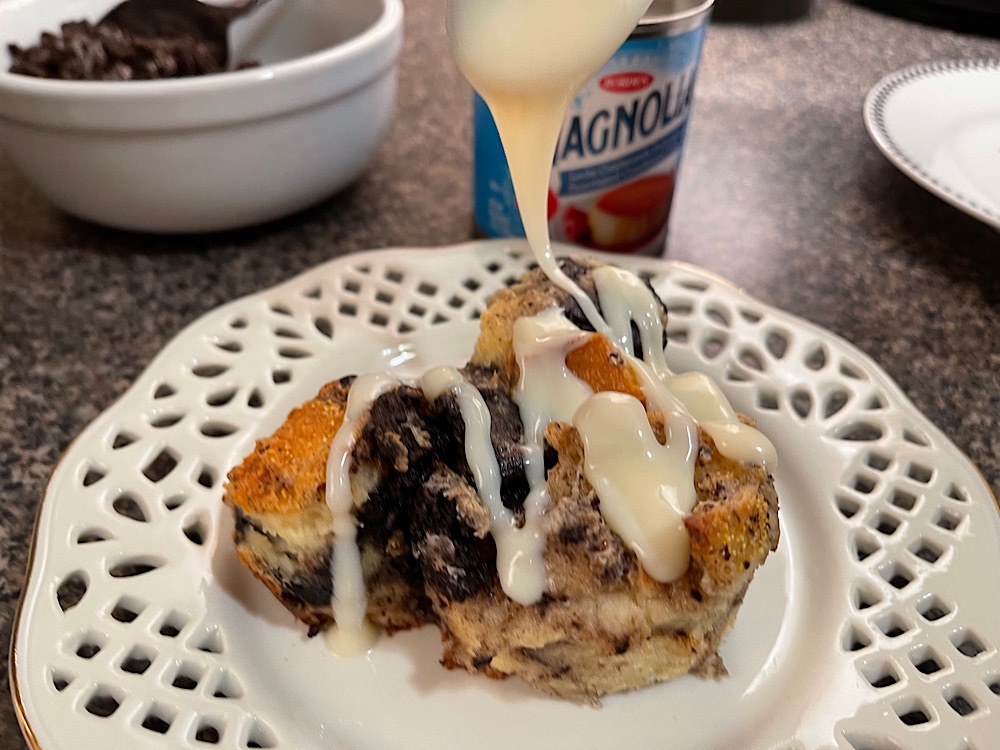 I then drizzled a spoonful of sweetened condensed milk over the top of my bread pudding. 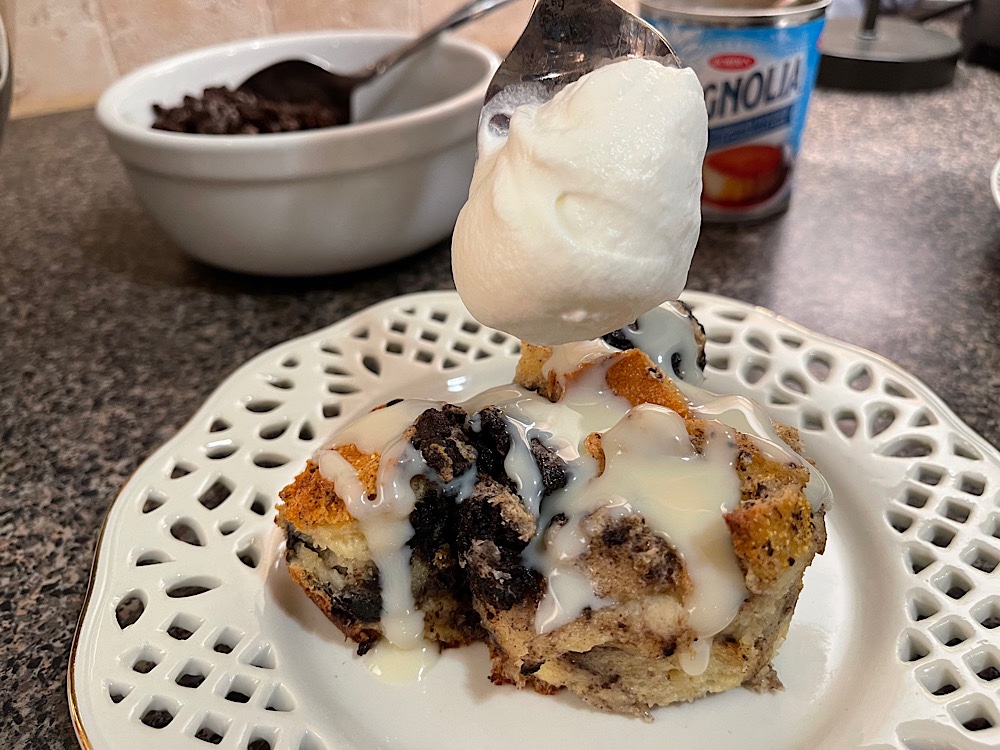 I placed a dollop of the homemade whipped cream on top and sprinkled crushed Oreos on top of that. 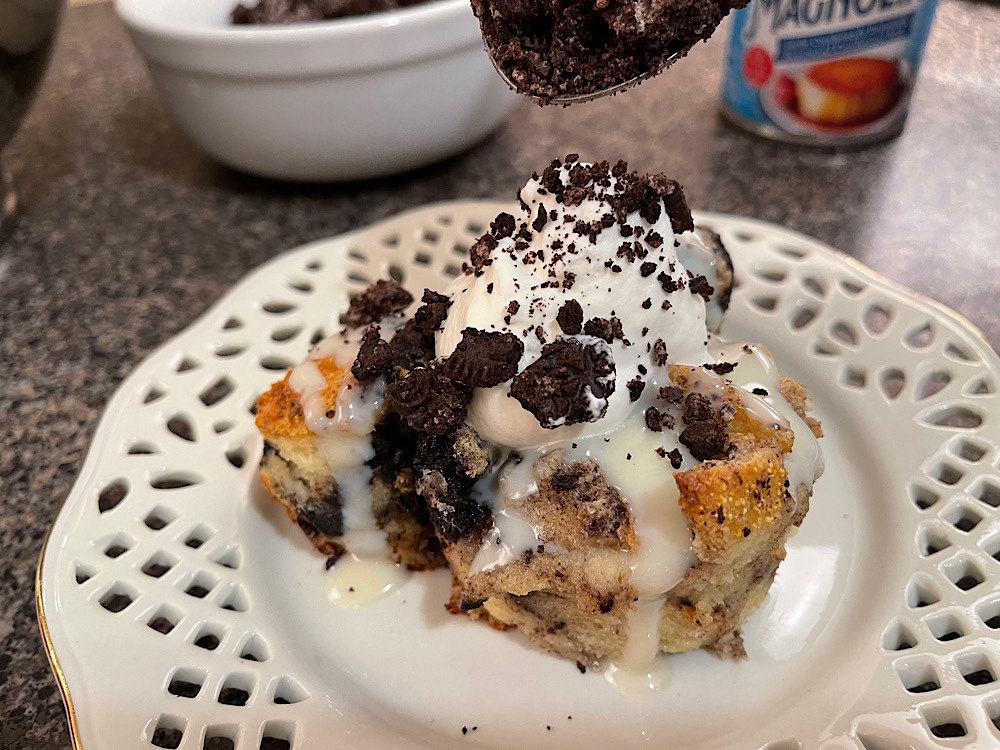 And I stood back and wondered at what I had done. It was beautiful. It looked just like the picture that accompanied the recipe, and I really just couldn’t believe it. And I hoped that it would taste as good as it looked. 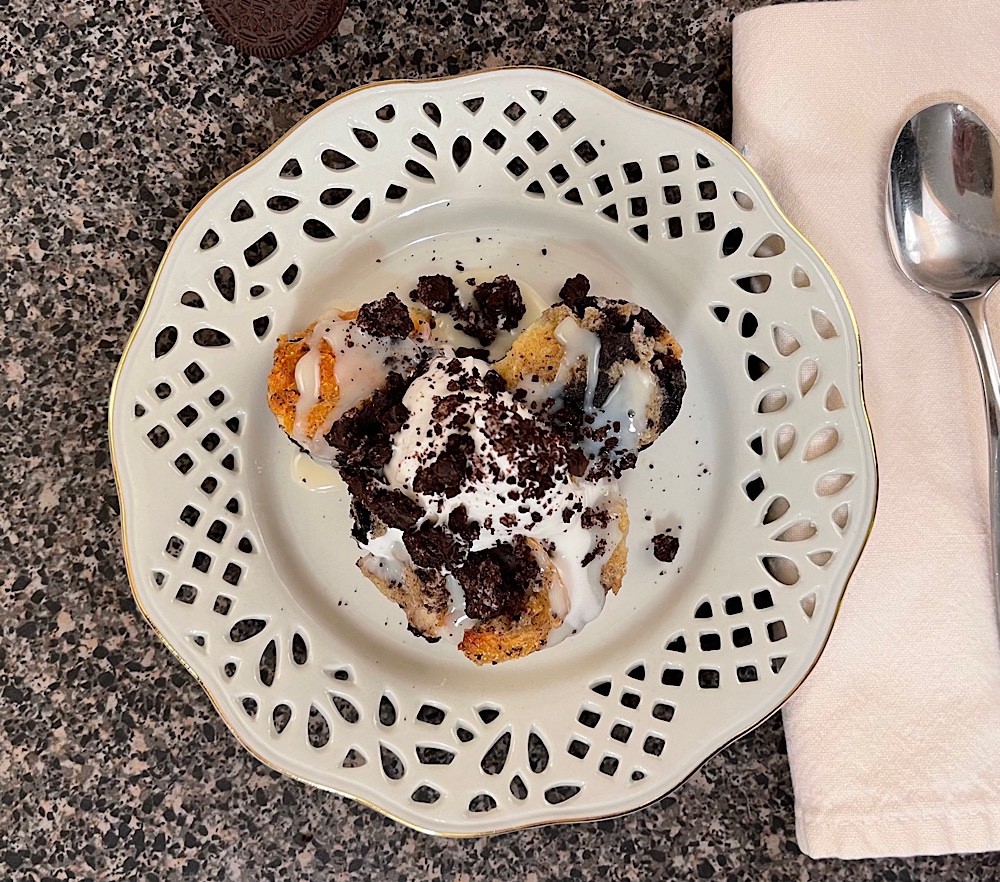 Oh dear, it did. This bread pudding was beautifully moist (my apologies to Ryno; I know he hates that word), and sweet and creamy and warm and good and every other accolade I could throw at it. This dessert is the bomb. And that homemade whipped cream is so lovely topping the whole thing. But my favorite bites were the ones that leaned heavier toward the sweetened condensed milk. There’s just nothing that stuff can do wrong. 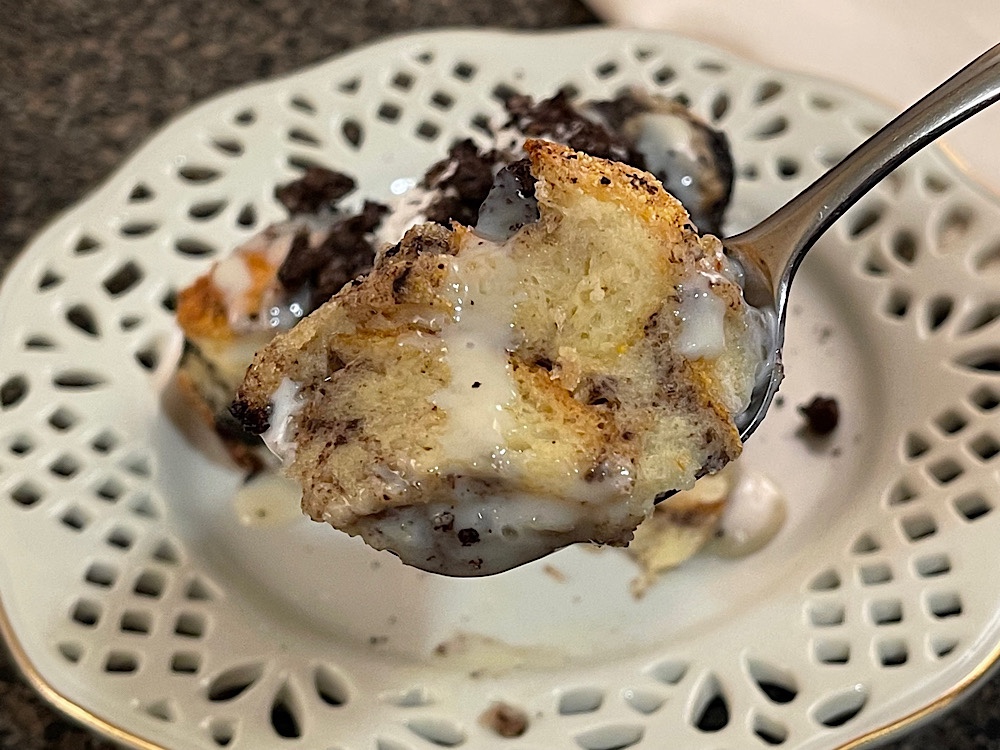 I cannot recommend this dessert more highly. I am so impressed once again by the Disney chefs. They have created an easily replicated at-home Disney dessert recipe. And it’s something that can be made and served by the pan with guests placing their own toppings on top if you so choose. You could always throw a scoop of ice cream on the side if you’d like. 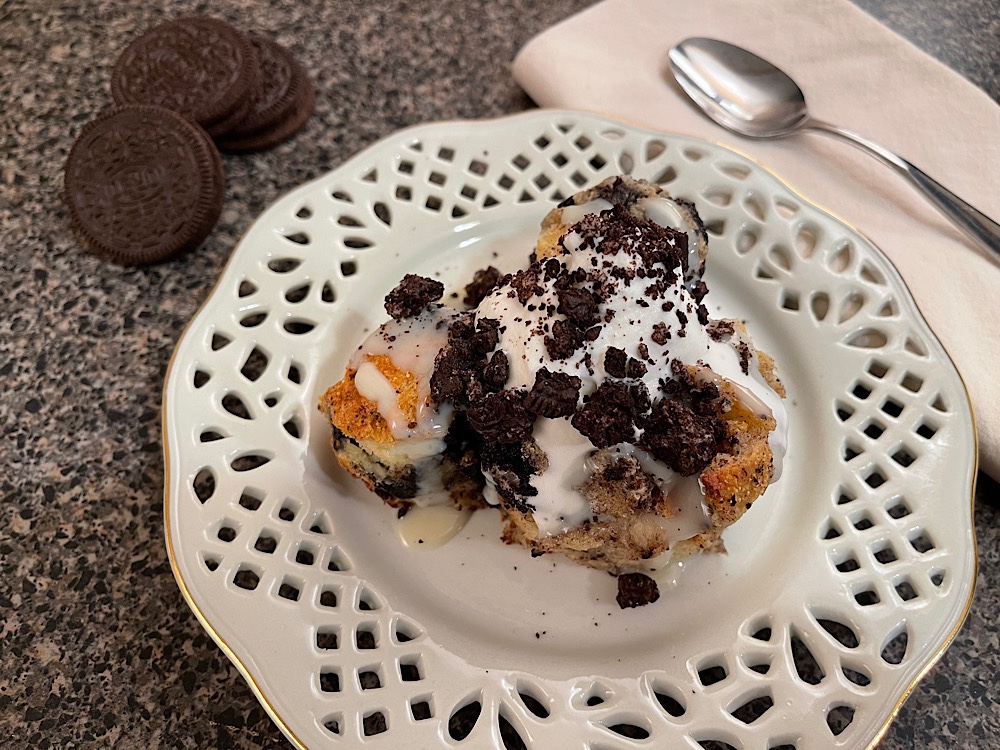 Whatever your next two days look like, I hope that you’re able to get some rest and eat something delicious. And of course, I highly recommend this Oreo-filled bread pudding. It would only improve your weekend. In fact, it’s going to improve any day that you decide to make it. It’s just so delicious.

May your weekend be a sweet one. Thank you so much for reading!

Ready to give Pacific Wharf Cafés Cookies ‘n Cream Bread Pudding a try? The recipe is below:

Five Reason Why You Should Consider Moving to Disney World