There was a time in my early twenties when, if you asked me what my favorite food was, I would have told you brownie batter. Not baked brownies, mind you, brownie batter. Yep. Don’t get me wrong; I loved (and still do) a good brownie, but there’s just something about brownie batter, isn’t there?

Round about that time, one of my hubby’s dearest grad school friends and his wife invited us over for dinner. I will never forget standing in the doorway between her kitchen and dining room when she told us that she had made brownies from scratch for dessert. I stood there looking at her like I had laid eyes on a Martian. Who would ever make brownies from scratch when all you had to do was buy the box at the store? Why go through all of the extra effort and gathering of ingredients when the red box that costs, in many instances, JUST ONE AMERICAN DOLLAR produces such lovely brownies? Why make things any more difficult than they need to be? Uh huh. Remember; I was young.

And then, one day some time later, I purchased a container of Hershey’s cocoa powder, and decided to make the brownie recipe on the back of the container. And I was forever converted. Granted, I’ve made plenty of box mix brownies over the years since, but nothing – and I do mean nothing – compares to scratch brownies. My friend was right all along.

And so today, we come to the brownie of all scratch brownies: Ghirardelli’s Classic Brownie. Ghirardelli stands like a beacon in the night in Disney Springs’ Marketplace. Even in these COVID times, the sweet stuff is being served up by the bowlful. Granted, the free pieces of chocolatey goodness aren’t being handed out at the door of the shop anymore, but you can still get ice cream treats covered in glorious hot fudge, and that’s all that really matters right about now. 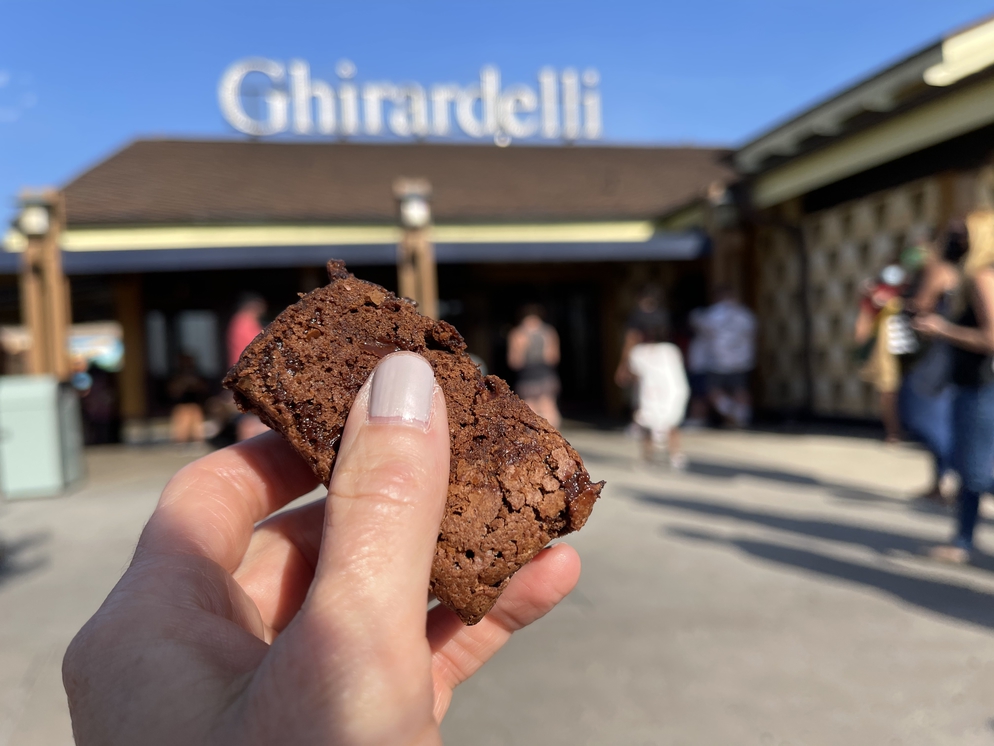 Of course, I couldn’t rightfully delve into re-creating Ghirardelli’s brownie for Saturday Snacks without sampling one straight from the source. These are the sacrifices I make. Ahem. Earlier this week, I paid a visit to Disney Springs and made my way to Ghirardelli and promptly ordered one of their ultra-thick, ultra-fudgy brownies. The brownie is featured in Ghirardelli’s Lands End Sundae, and if you ask at the counter, they will sell you a brownie separately for $4.95. Since I wasn’t looking to completely spoil my appetite just before dinner, I ordered the brownie without the ice cream (and answered yes when asked if I would like it warmed), and stood outside to wait for my name to be called. 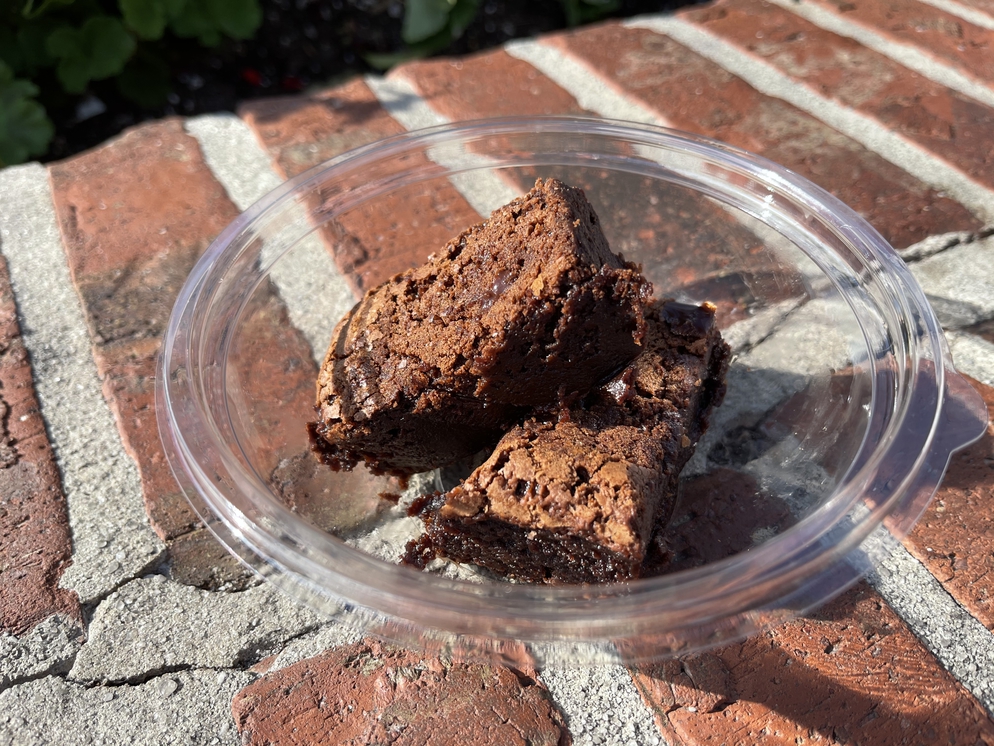 Friends, when I say that this brownie was good, I mean it was gooooood. It’s half-baked, fudgy and incredibly decadent. The brownie was studded with chocolate chips and was melty, glorious chocolate heaven. I sat there on the brick wall studying the brownie and savoring every bite. Could we replicate this amazing work of chocolate? Yes, this is Saturday Snacks, after all. We can do just about anything when it comes to replicating Disney snacks in our own kitchens, right? 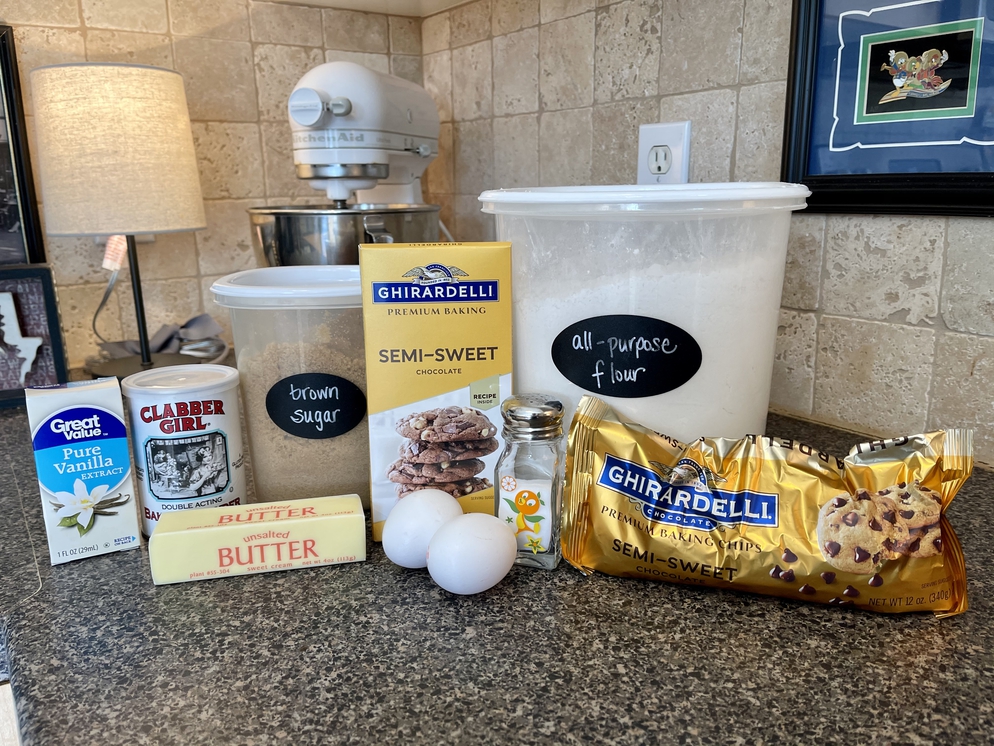 Our ingredients list is relatively short, and, for the most part, calls on items that are already in our pantries. The two items that I needed to pick up were a bag of Ghirardelli semi-sweet chocolate chips and one of their semi-sweet chocolate baking bars. It was surprising to me to find that the Ghirardelli shop sells an array of the company’s baking products, however, the semi-sweet baking bar was sold out on the day that I stopped by. It took me two additional stops that evening to finally hunt down the chocolate bar, and I breathed a sigh of relief when I finally held one in my hand.

Our first step to ushering in today’s decadent snack is to preheat the oven to 350 degrees. We’ll need a large bowl and a small glass bowl, a small saucepan, and an 8-inch square pan out of the cabinet, and now’s the time to gather those up. 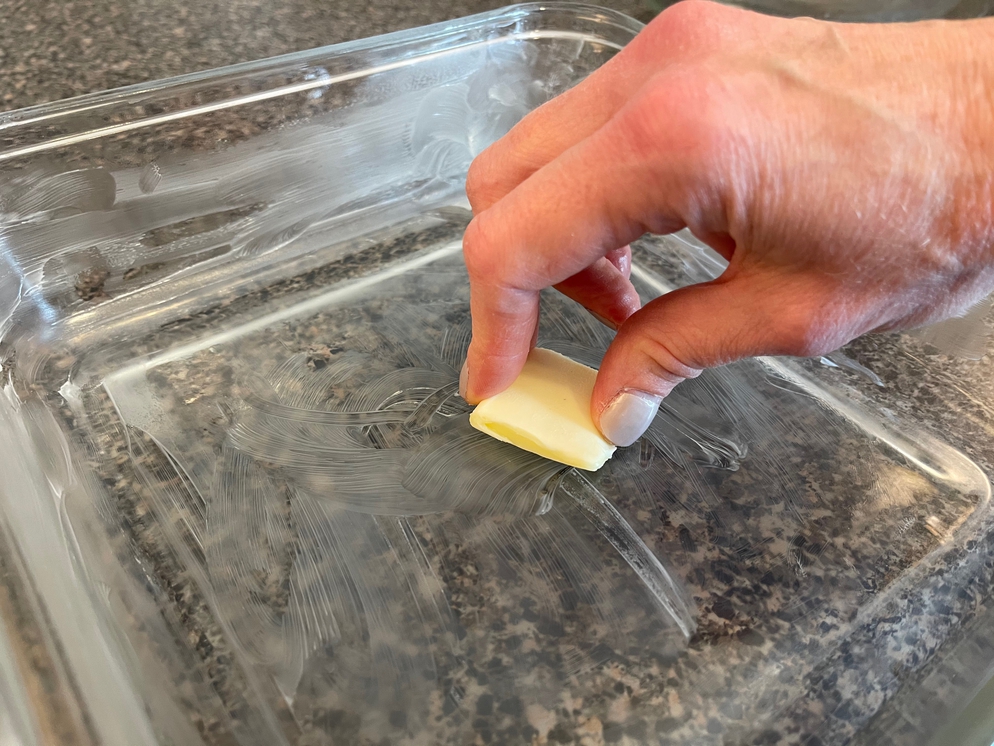 I began by coating the entire inside of the 8-inch baking pan with butter and then sprinkled a 1/4 cup or so of flour into the pan and turned it around, allowing the butter to grab the flour. 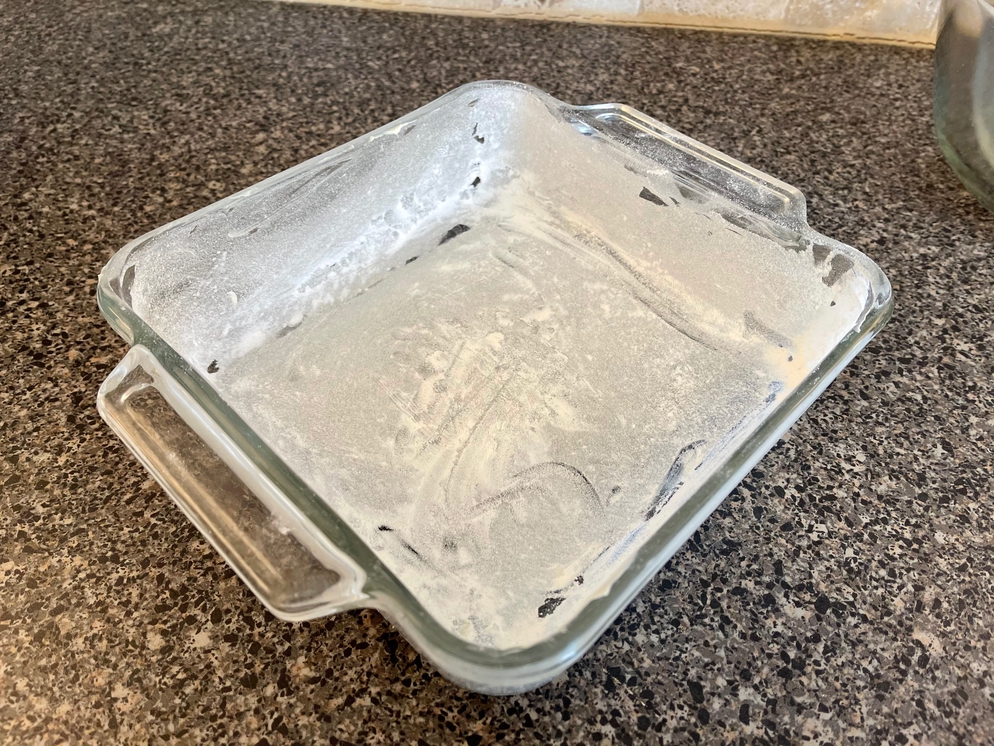 Once the pan is buttered and floured, set it aside. 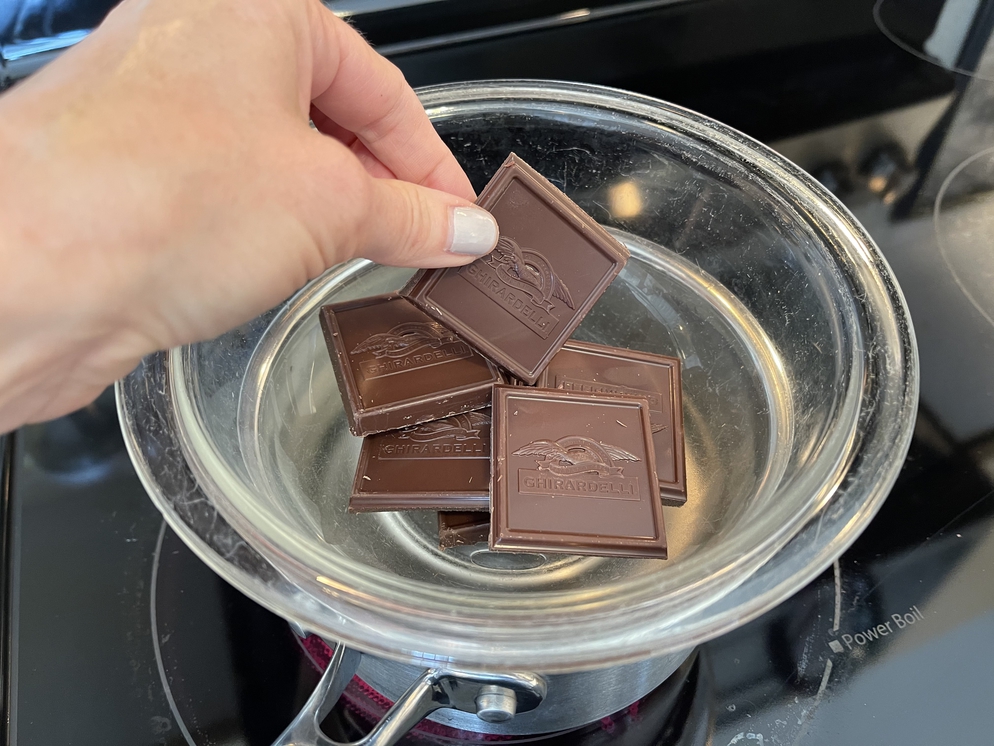 Our next step is to fill the saucepan halfway with water and place the small glass bowl on top. The recipe calls for us to chop the bar of baking chocolate, but, if you know me, you know that I politely declined to do so and simply broke the bar into squares. 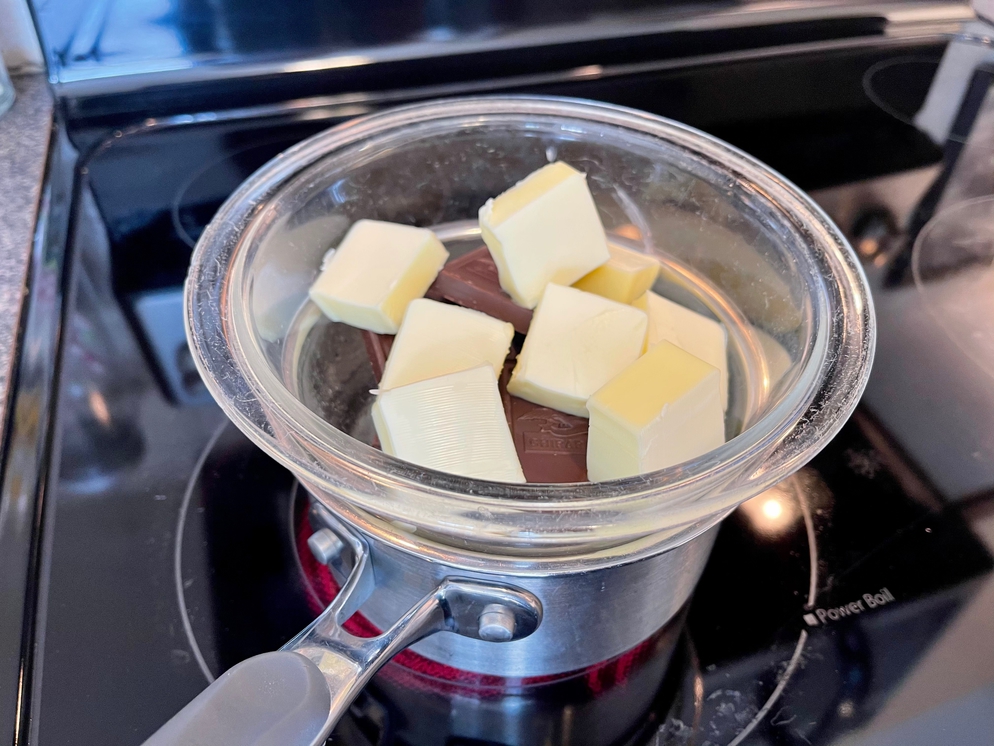 I cut the stick of unsalted butter into pieces, and placed the chocolate and butter into the glass bowl. I turned the heat high enough to allow the water to come to a simmer and stirred the butter and chocolate (is there anything better?!) as they melted. 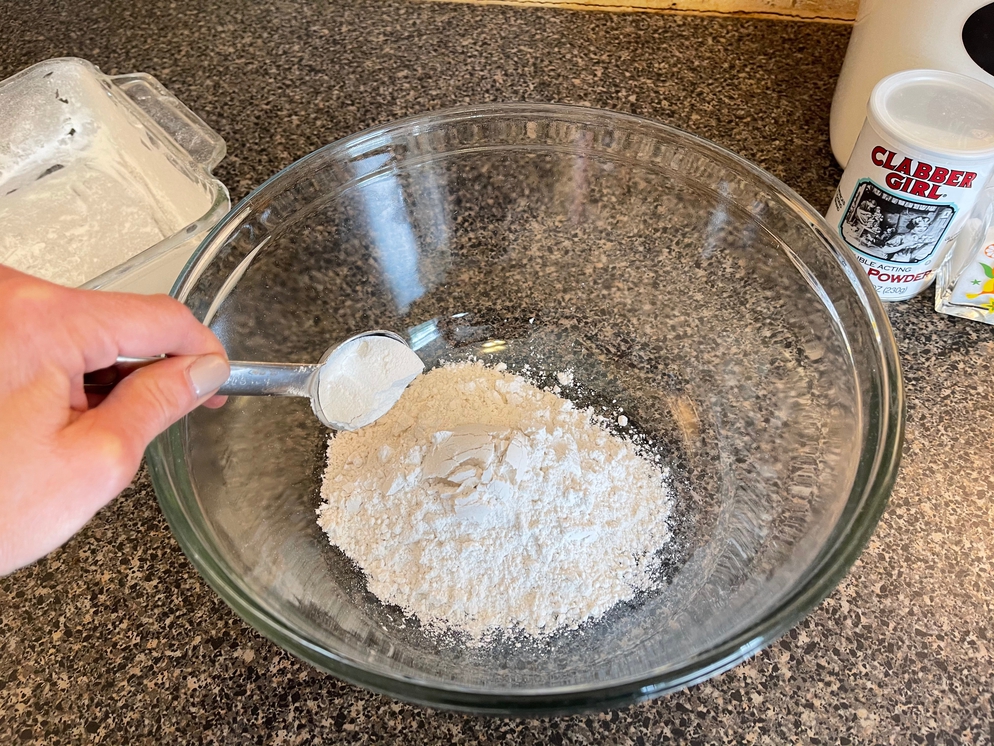 While I was waiting for the water in the double boiler to come up to temp, I grabbed my large mixing bowl and tossed in 3/4 cup + 2 tablespoons of all-purpose flour, 1/4 teaspoon of baking powder and 3/8 teaspoon of salt. 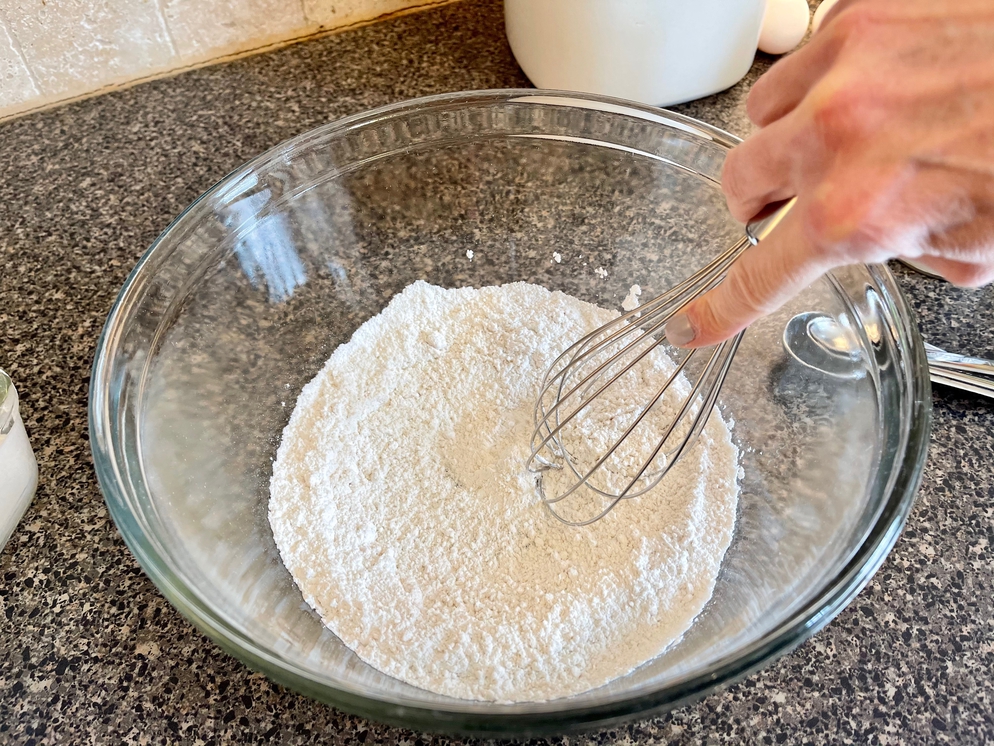 The recipe asks us to sift the three together, but if you’d rather not go the route of sifting everything, simply grab a whisk and give the dry ingredients a good swish. Make sure that everything’s completely combined. 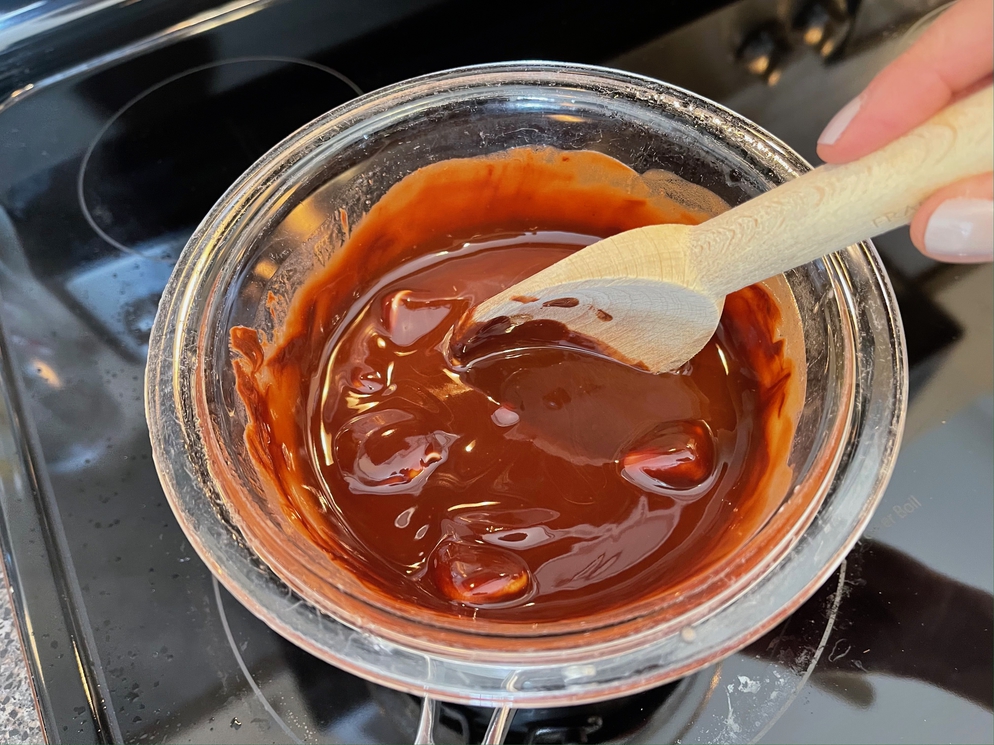 Back on the stove, stir the butter and chocolate until they’re completely melted, glossy and smooth. Once the two have melted, pull that bowl off of the saucepan and let the chocolate mixture cool to room temperature. 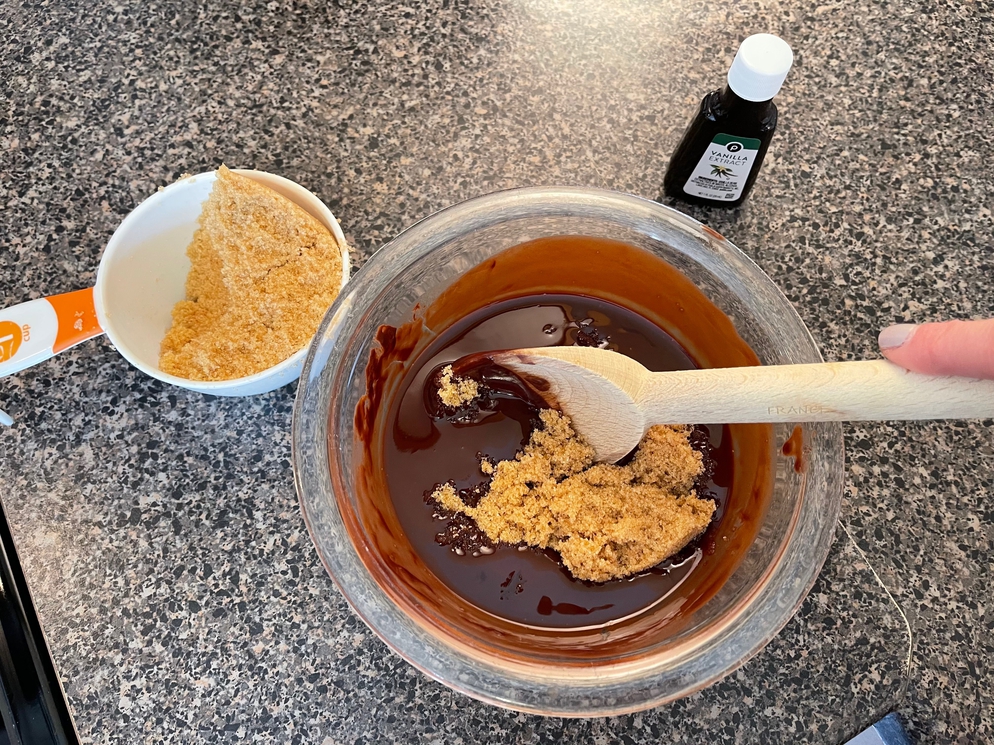 It took about 30 minutes for my chocolate mixture to cool down, and once it did, I stirred in 1 cup of packed brown sugar and 1 teaspoon of vanilla extract. 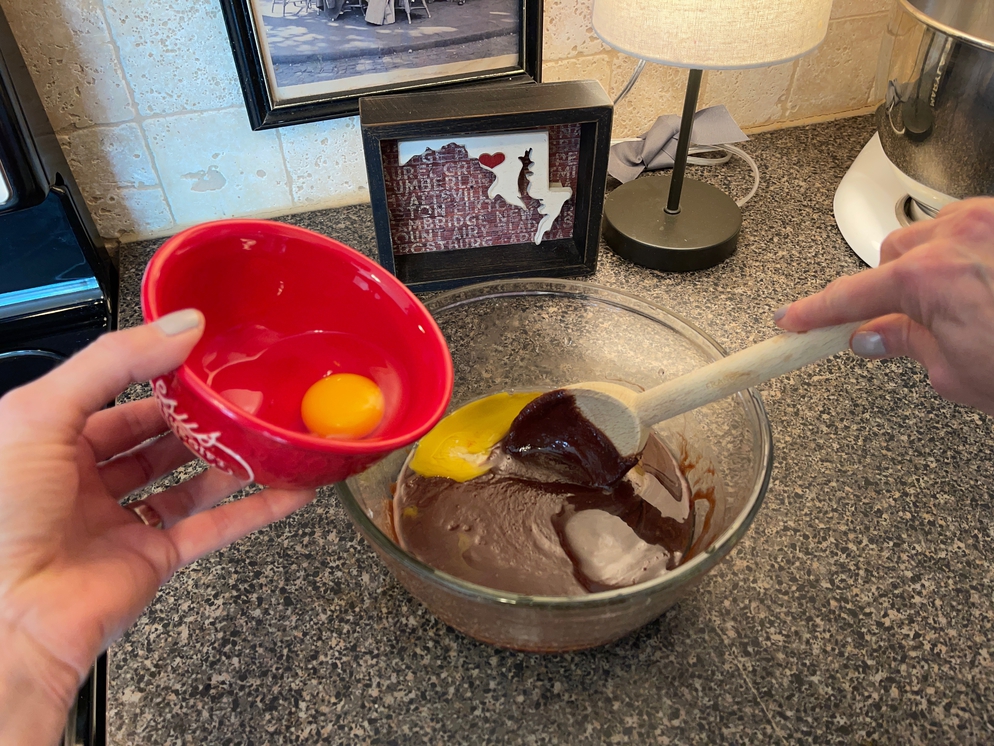 After stirring in the brown sugar and vanilla, I added in 2 eggs and mixed everything well. So far, so good; but will the at-home version of Ghirardelli’s brownie taste as amazing as the one that I enjoyed on Wednesday in Disney Springs? How I hoped the answer would be a resounding yes. 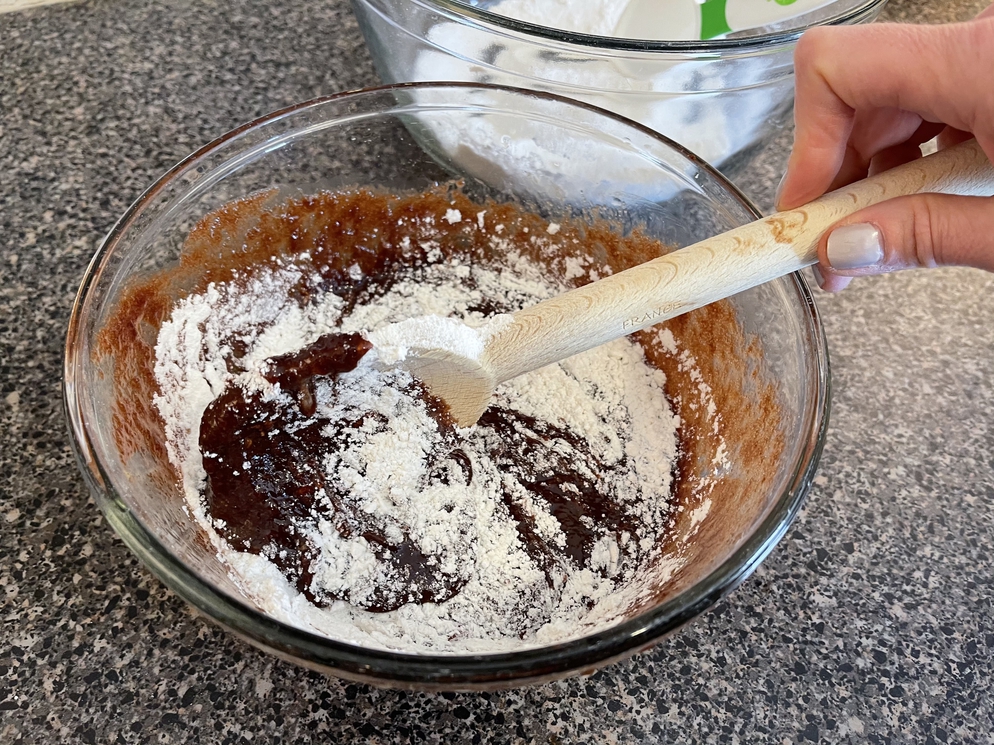 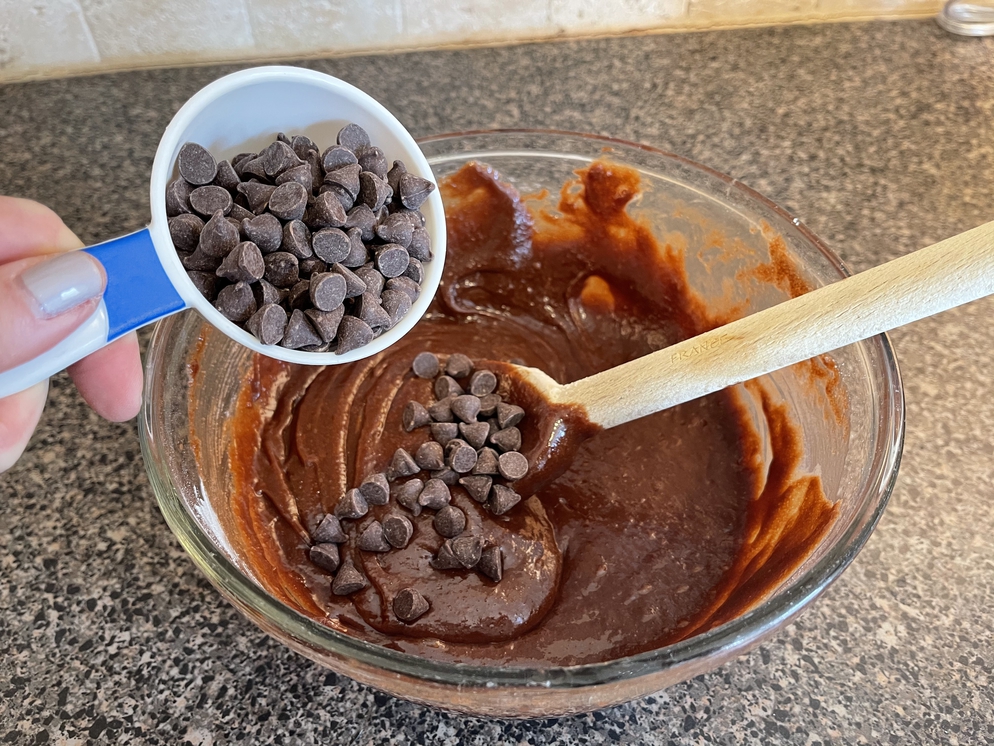 Once the batter was looking good, I measured out a half cup of semi-sweet chocolate chips and stirred them in. Of course, you’ll have plenty of chocolate chips left over, so be sure to toss a few in your mouth. Consider them an appetizer. 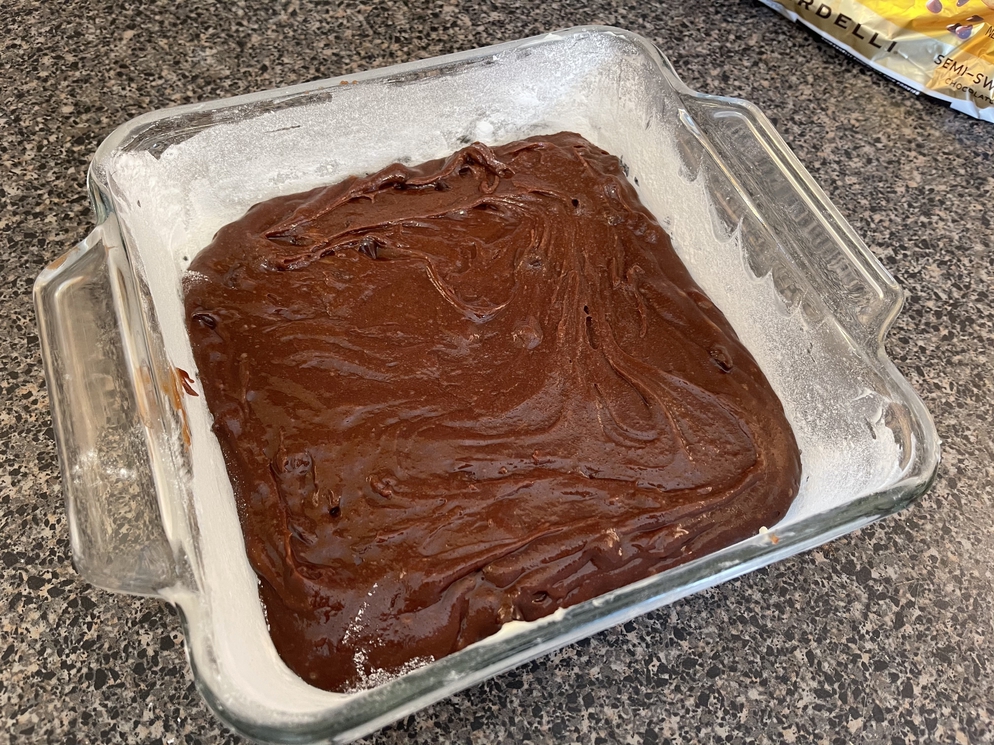 Pour the completed batter into the prepared pan, place it into the 350 degree oven, and set the timer for 25 minutes. We’ll check the brownies at the 25-minute mark with a toothpick and see if it comes out clean.

When 25 minutes was up, I opened the oven door and saw a pan of very promising-looking brownies inside. Truth be told, I had checked on the brownies halfway through, and hoped that they were moving in the right direction. And that they were, but at 25 minutes, they just weren’t quite ready. I popped them back into the oven, and decided to give them 3 more minutes. At the 28-minute mark, I decided that enough was enough. The recipe said to give them 25 to 30 minutes, and I figured that splitting the difference would do. I pulled the pan out of the oven and placed it on a trivet to cool for the required 10 minutes. And I hoped beyond hope that they’d resemble what I sat on that wall and enjoyed the other day. 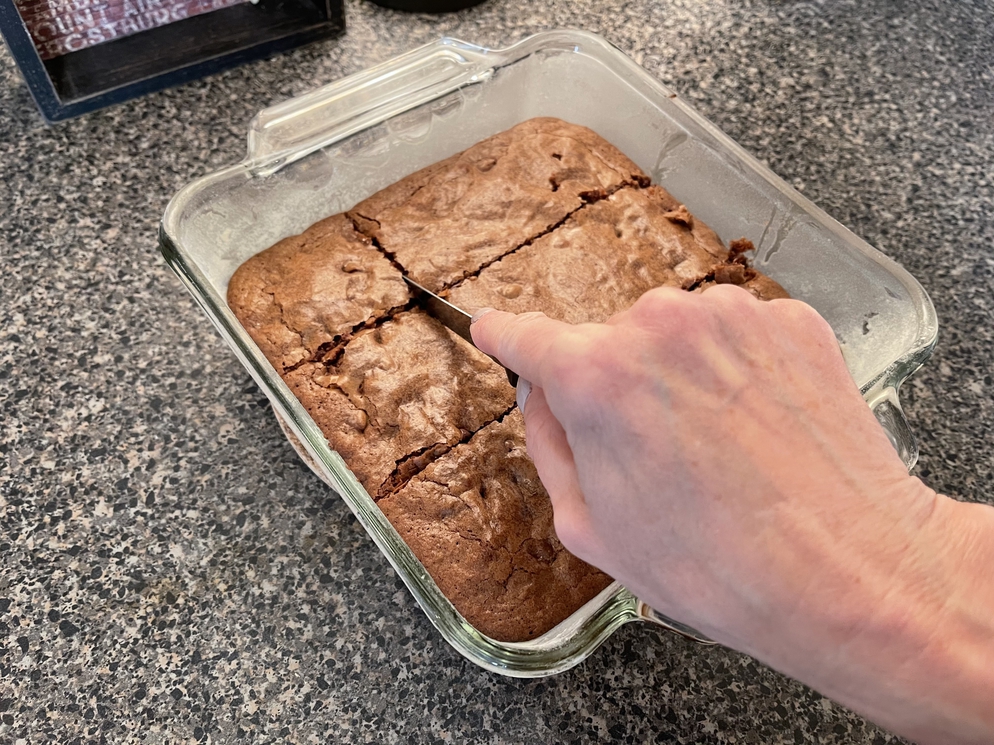 After 10 minutes, I grabbed a sharp knife and began cutting the brownies. While the recipe calls for us to cut them into 2-inch brownies, I felt that they needed to be a bit larger than that. I mean, why not? 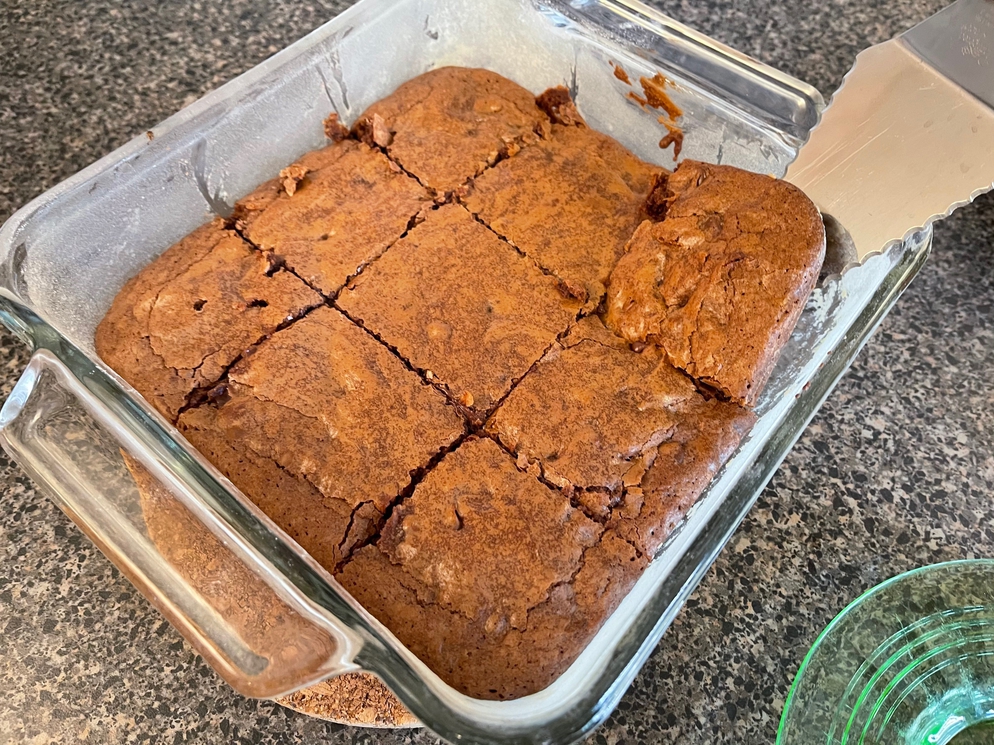 If the brownie crumbs start to cling to your knife while cutting them, run your knife under hot water and cut the brownies while the knife blade is still wet. It’ll help the lines to be sharp and the brownies not to crumble. 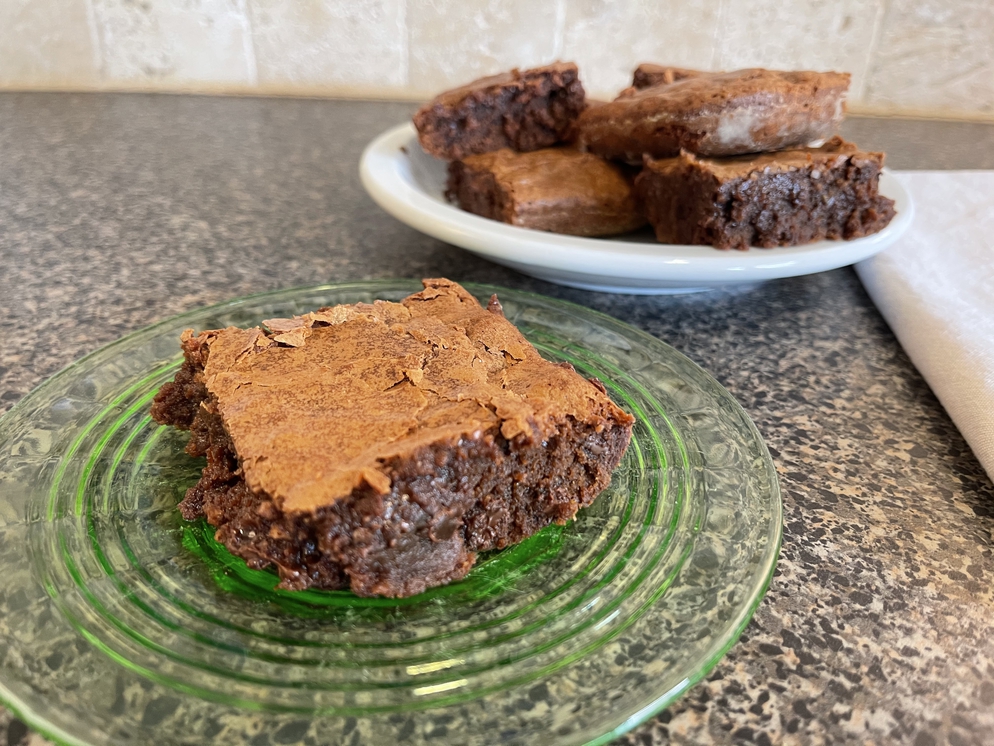 And, as I had hoped, the most amazing brownies emerged from that pan. Brownies just like the ones that Ghirardelli’s serving up at Disney Springs were now sitting on my kitchen counter, and I was the happiest of campers. 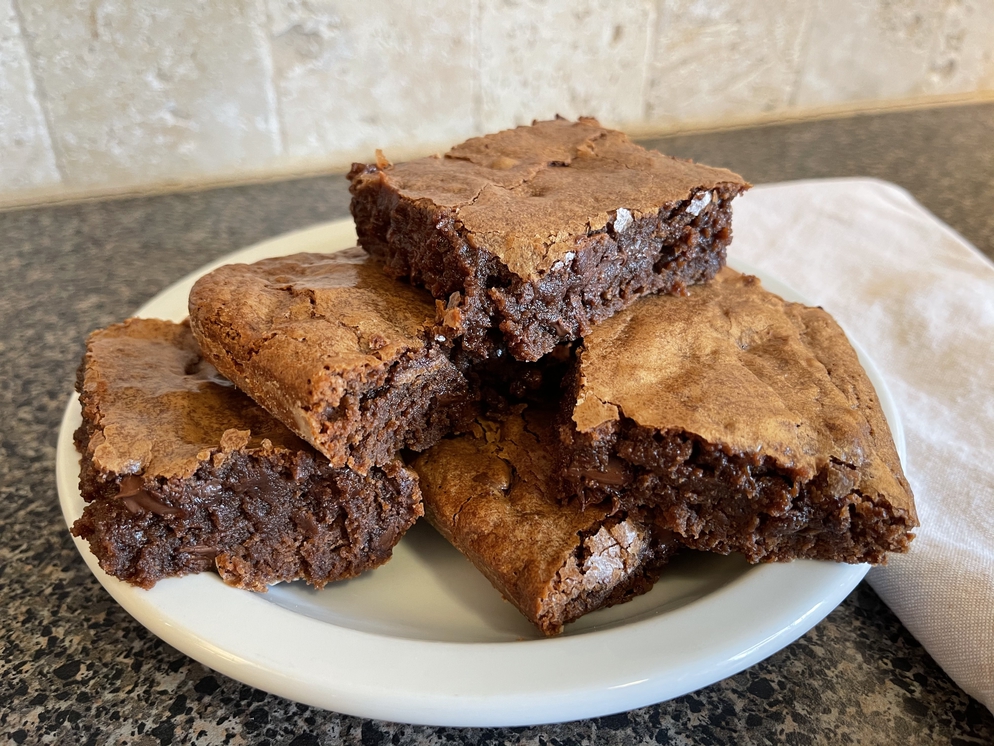 The brownies are rich and moist (so sorry, Ryno; I know you dislike that word). The chocolate chips are melty and add such a wonderful, overall flavor and texture to the whole shebang. 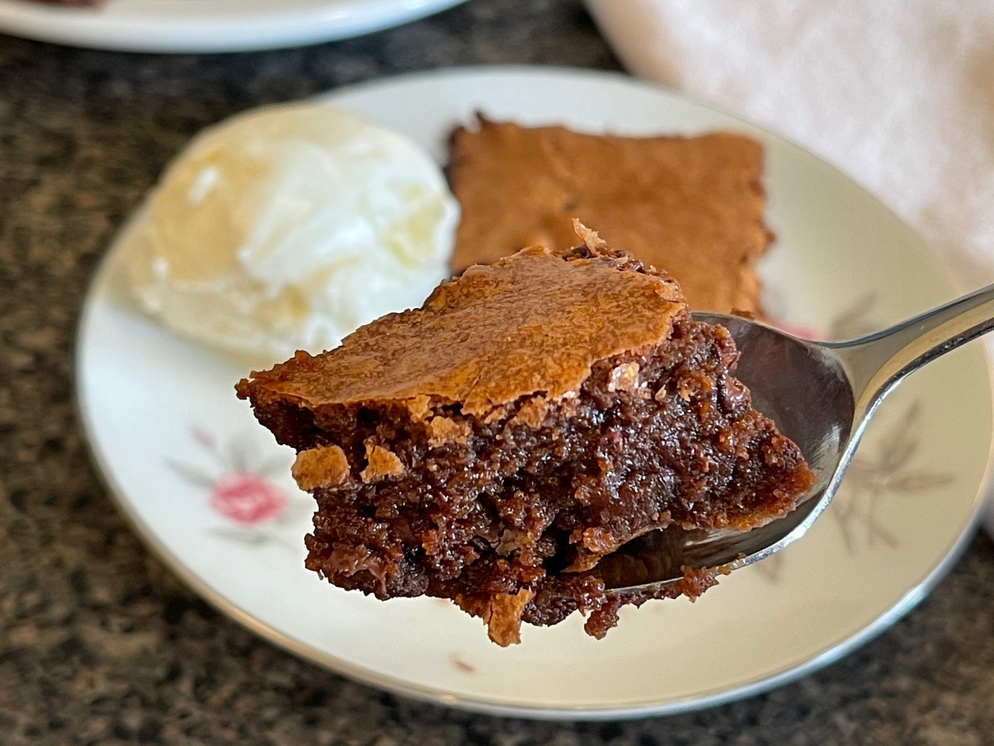 Of course, I had to grab my vanilla ice cream out of the freezer and pair a scoop with a perfectly fudgy and delicious brownie. And, if you have a bottle of chocolate sauce (which, by the way, they also sell at Ghirardelli) on hand, even better. Make yourself a celebratory “I made it to the weekend” brownie sundae and enjoy every bite. 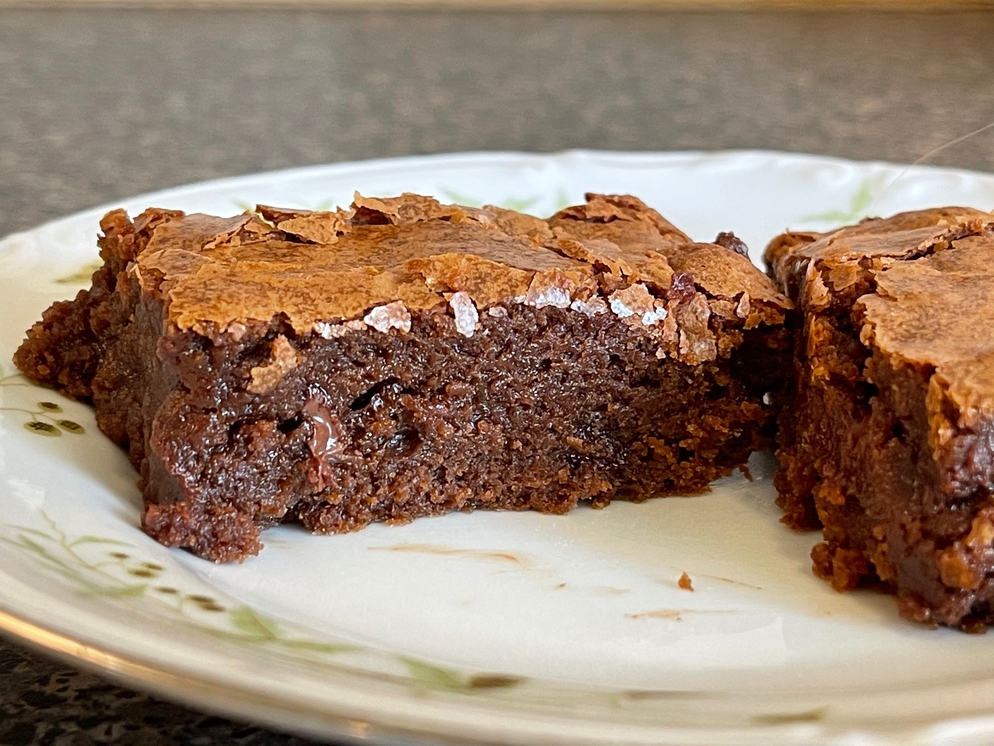 What you are whipping up in your kitchen these days? What’s bringing you joy? Please let me know in the comments section below. If you’re new to Saturday Snacks, I’m so glad to have you along for the adventure! Click here to catch up on all of the snack-making fun we’ve had ’round here thus far.

Whatever you’ve got on your weekend to-do list, I hope that you give yourself a moment or two (or forty-three) of rest, respite and levity. We all need that. And, of course, I hope that you eat something incredibly yummy. That’s what weekends are for.

Ready to bake up Ghirardelli’s AMAZING Classic Brownies? The recipe is below: