Sometimes a recipe, like moments in life, doesn’t quite turned out as you planned. Sometimes things seem so good in theory, but when it comes to practical application, something zigs when you thought it was going to zag. And you might not even fully know where whatever went wrong, went wrong. It doesn’t mean that the end result is necessarily bad, it just means that it’s different than what you had originally expected. Case in point: Pizzafari’s Children’s Dessert Pizza. But I digress. We’ll get there in just a few.

Years ago, around about the time that my son was turning 12, we had an electrical outage. His birthday is in the middle of summer, and if I recall correctly, a terrible summer storm had blown through, knocking out all of the power to our general vicinity. The same day that the power decided to take a leave of absence, we were to host our son’s family birthday dinner. Needless to say, as the hours ticked by that afternoon without the resumption of power, it became quite clear that we would not be hosting said dinner in our home.

What resulted that evening, I’m convinced, made my son far happier than he ever would’ve been having Paula Deen’s crockpot macaroni and cheese recipe with his family at home. No matter how much butter Miss Paula wanted me to add that recipe, it would never top CiCi’s Pizza’s endless pizza buffet. If you’re unfamiliar with the treasure trove that is CiCi’s Pizza, picture all sorts of creative pizzas served up buffet-style for one low all-you-care-to-eat price. Needless to say, it was a 12-year-old’s heaven on earth, and our son was never more happy. The CiCi’s Pizza in the next town over had electricity, and the decision was made to relocate the birthday dinner there. My son ate and ate and ate. It was Shangri-La. It wasn’t what we intended for the celebration, but the birthday boy and all involved had a good time, and that’s all that mattered.

Among the offerings on the buffet that night was a dessert pizza. It was something sweet and gooey and all in keeping with the pizza theming. It’s with this in mind that we come to today’s Saturday Snacks recipe: Pizzafari’s classic Children’s Dessert Pizza. It seems only right that we would whip up a recipe from Disney’s Animal Kingdom since the park celebrated its 23rd birthday this past Thursday. Pizzafari is serving as a Relaxation Station rather than a quick service dining location these days, but, in normal times, Pizzafari is the home to all things theme park pizza. They’ve tried a few creative things over the years, and while the Children’s Dessert Pizza is not on the latest iteration of the menu, we can find the recipe in Cooking with Mickey and the Chefs of Walt Disney World Resort. 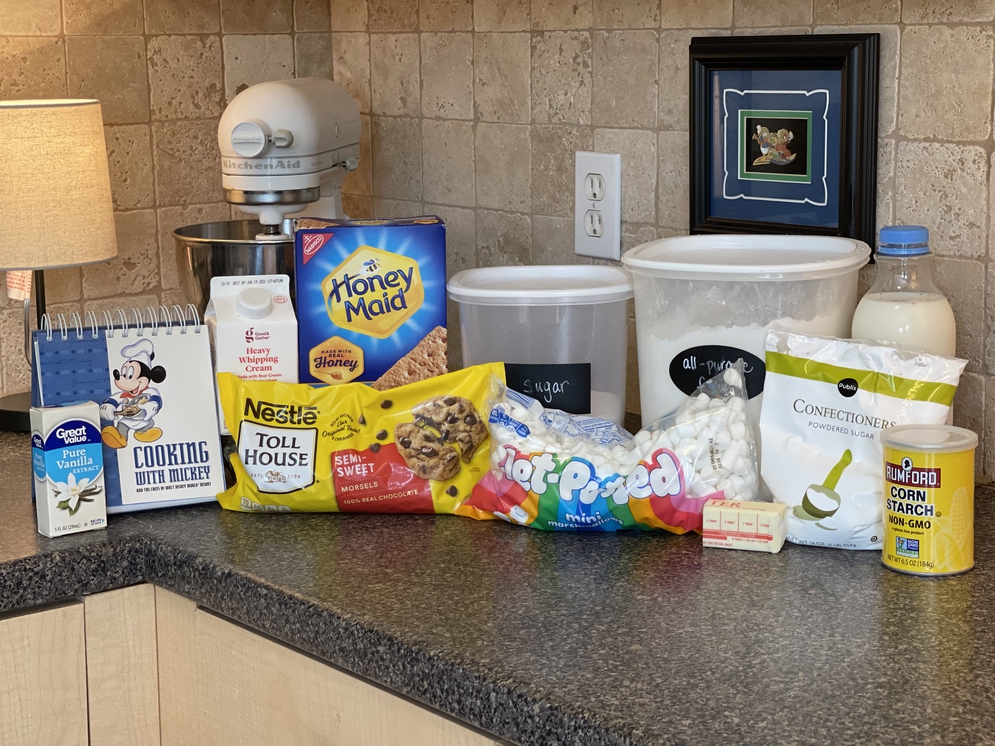 The idea of a dessert pizza intrigued me, and I flagged this recipe a while ago as a potential one to try. The ingredients are simple: a lot of chocolate chips, even more mini-marshmallows, a bit of flour and sugar, graham cracker crumbs, plus a few additional ingredients that are readily accessible in our pantry and/or fridge. 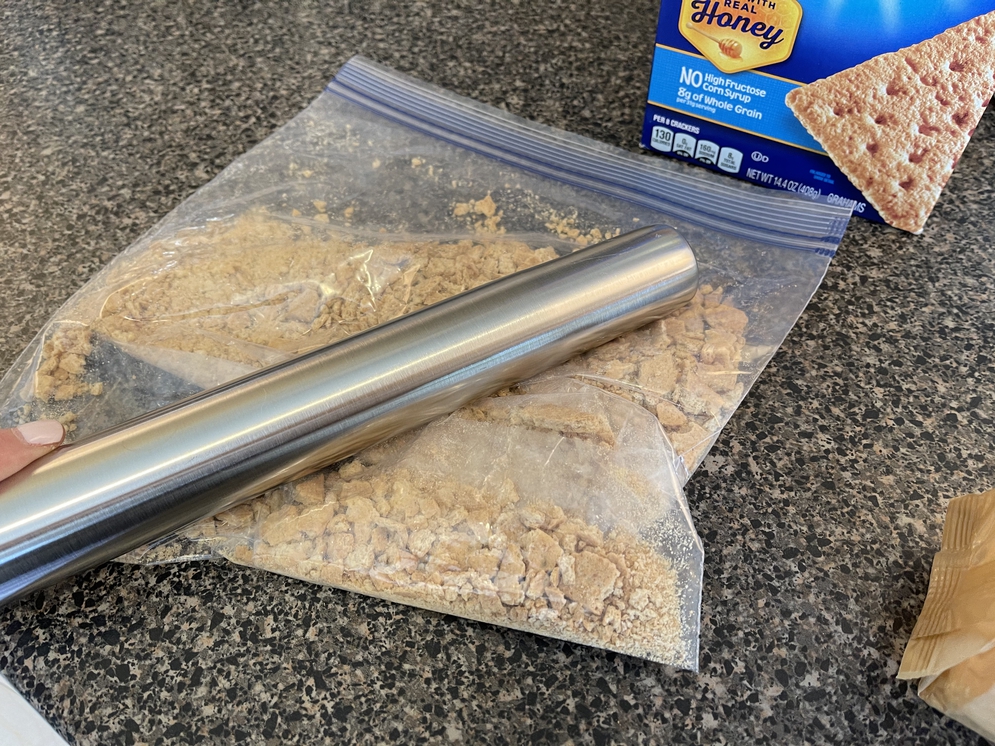 The big box store from which I gathered my ingredients did not carry pre-made graham cracker crumbs, so I decided to grab the graham crackers that I keep on-hand in my pantry (last year I confessed my penchant for keeping s’mores ingredients at the ready at all times, which came in handy this week) and crush them in a baggie. Have a little pent up frustration on your hands? Throw five or six graham crackers in a gallon-sized bag and pulverized them. It’s cheap therapy.

To get started, you’ll want to melt your butter in the microwave. Remember to keep a sharp eye on it, or that butter will coat the inside of your microwave and you’ll have a mess on your hands.

The recipe calls for us to create the dessert pizza crust by assembling it and then pressing it into a 10-inch pizza pan. The pizza stone that I’ve had lo these many years is of the 12-inch variety, and pizza pans at my big box store were incredibly large. I grabbed my ruler and eyeballed were 10 inches around was and knew I would simply have to make my pizza stone work. 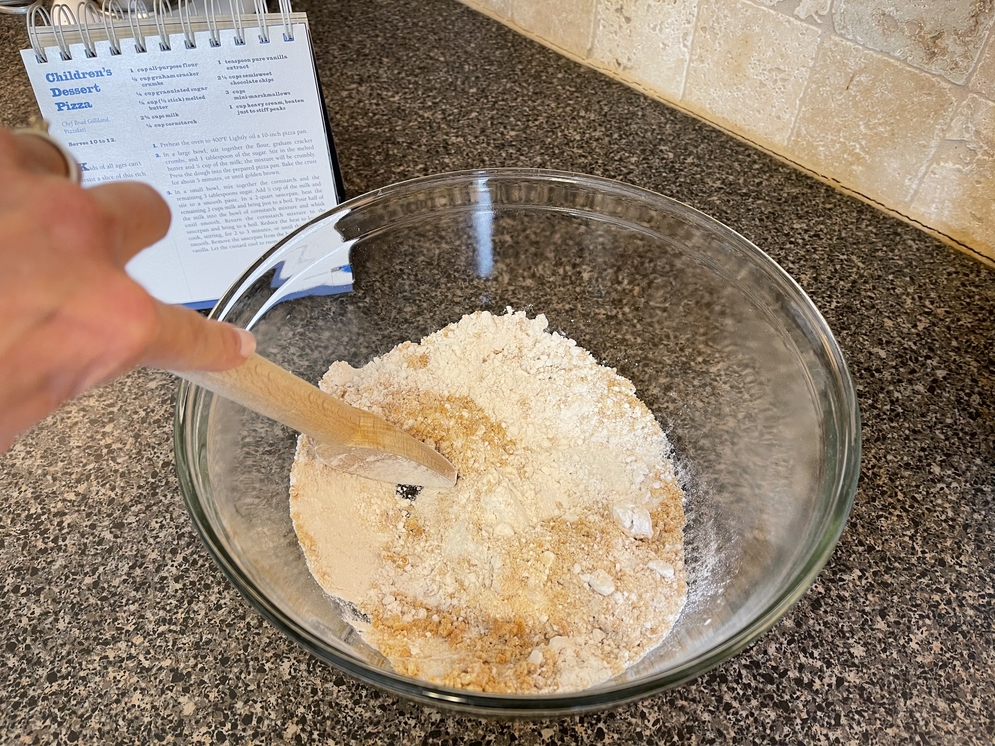 Into a large bowl, you’ll want to stir together 1 cup of flour, 1/2 cup of graham cracker crumbs, and 1/4 cup of granulated sugar.

Once things are combined, add the melted quarter cup of butter and half of a cup of milk. Stir together to combine, oil your pizza pan, and press the crust dough onto the pizza pan/stone/baking pan. Whatever you’ve got, pull it out and use it; it’s going to be a pizza pan today. 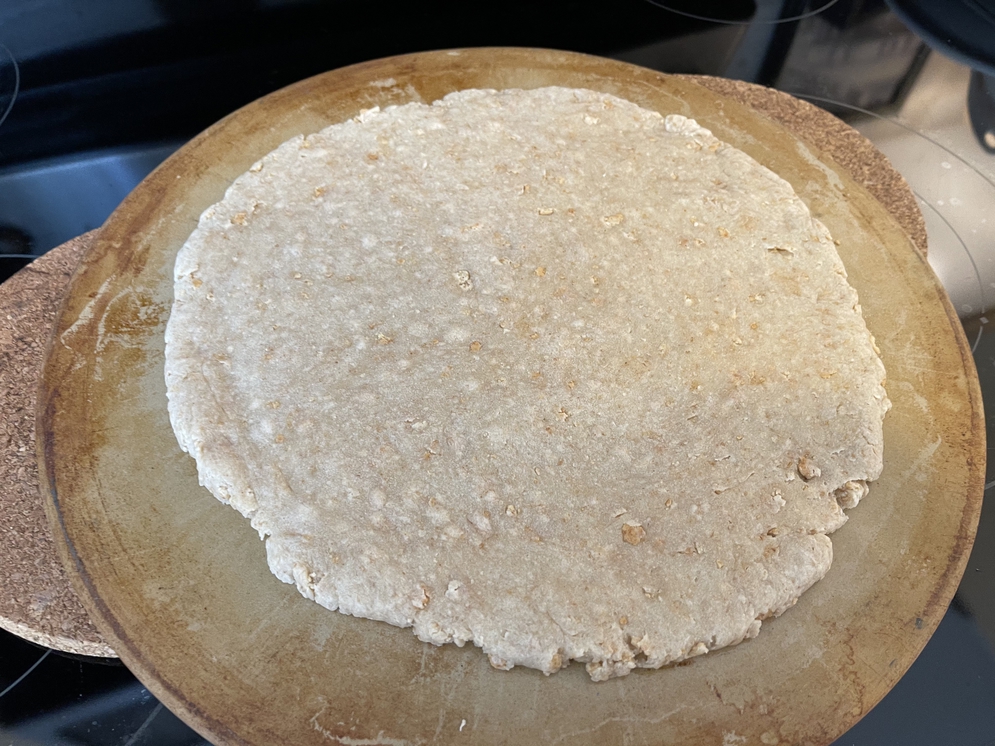 The crust goes into a 400° oven for five minutes. The recipe says five minutes or golden brown, and I went ahead and pulled mine out after five minutes thinking it was done just enough. 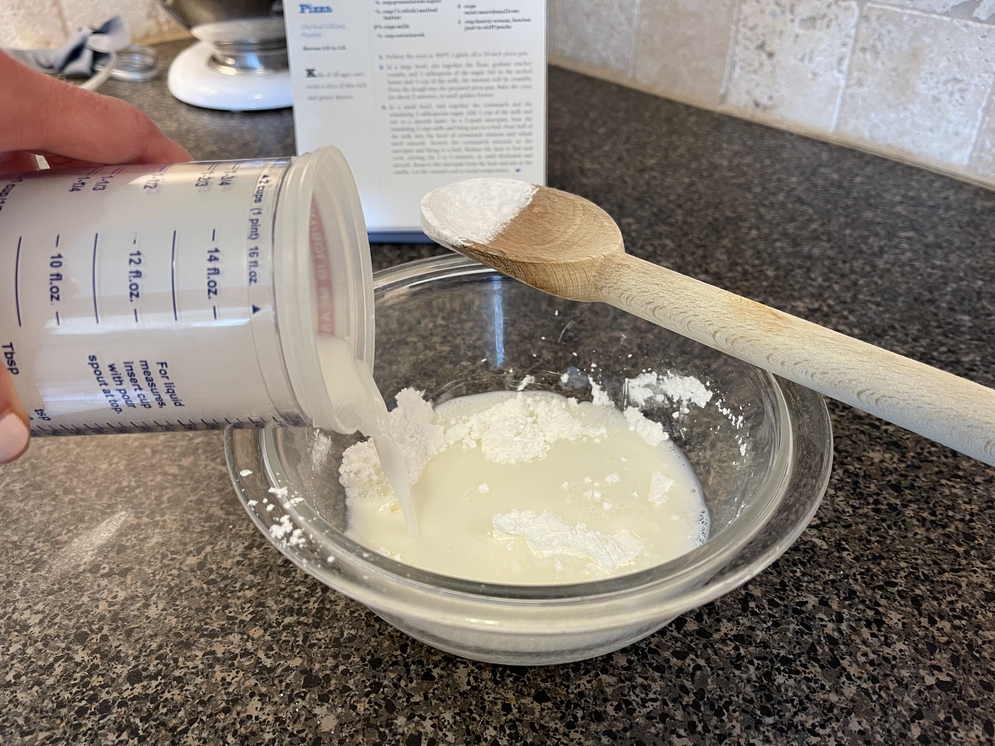 Grab a small bowl from the cabinet and toss in a quarter cup of cornstarch and 3 tablespoons of sugar. Mix the two together and then add a half cup of milk and stir to create a smooth paste. 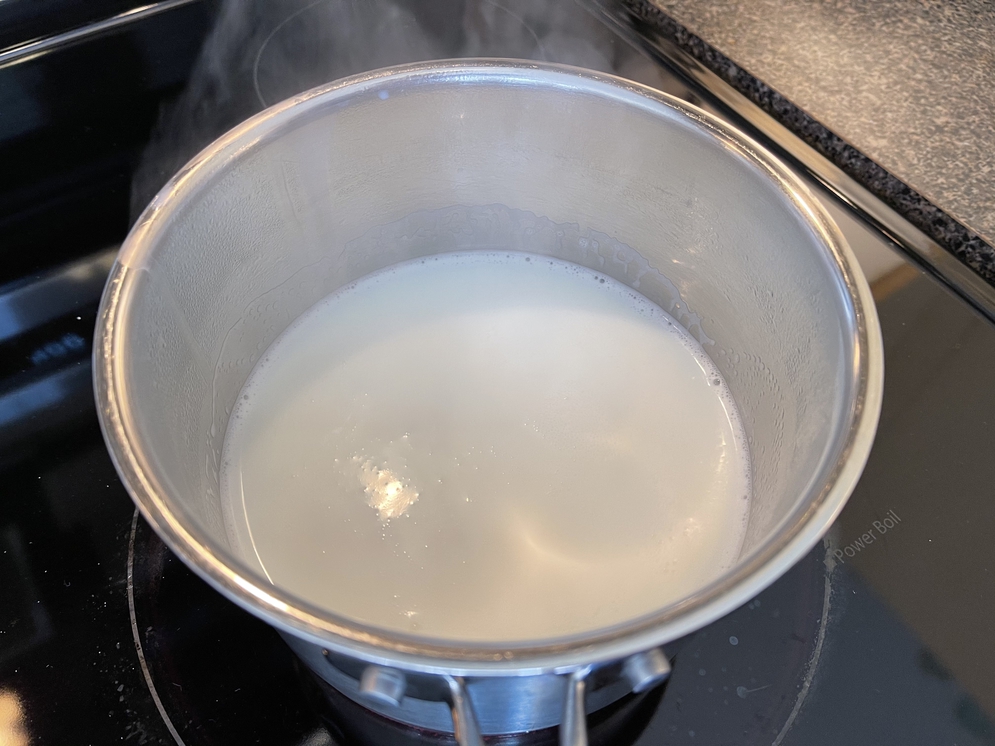 Into a medium saucepan, pour 2 cups of milk and bring just to a boil. Don’t let this bubble too much; when you tiny bubbles starting to form, that’s the point at which it’s done. 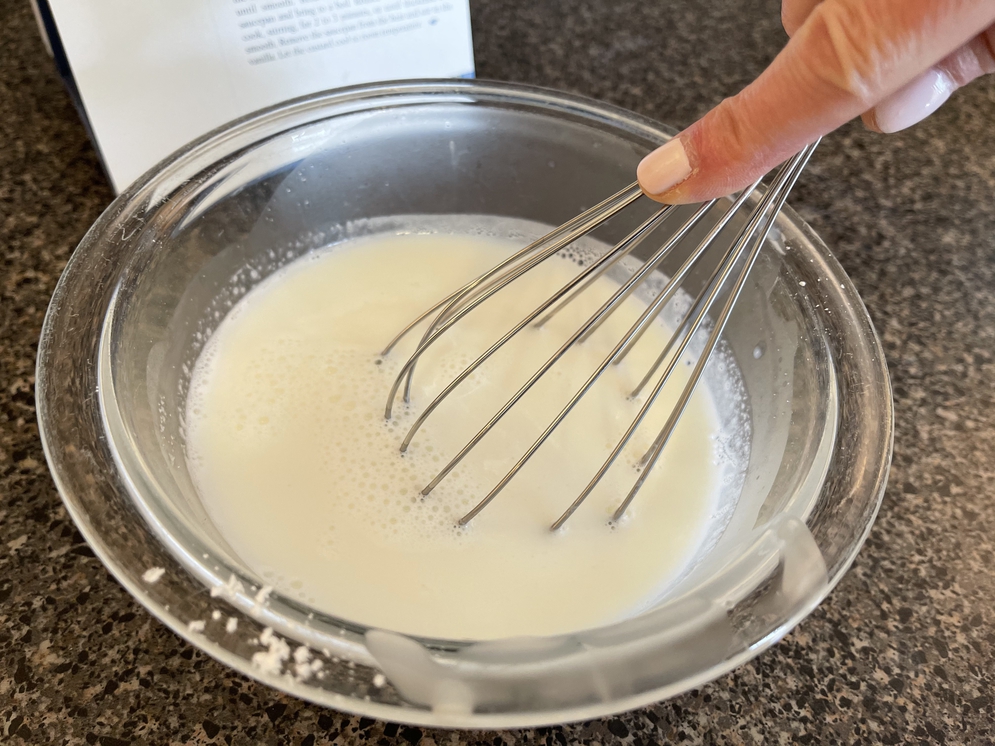 Pour half of the hot milk into the cornstarch mixture in the small bowl and whisk to combine. 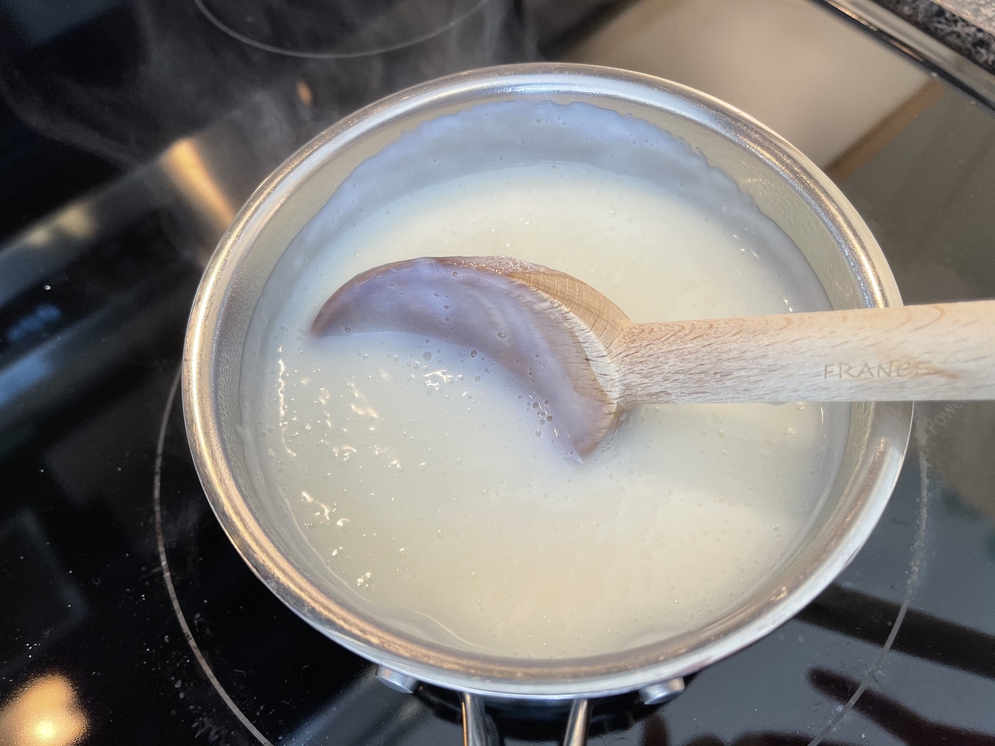 Once everything is smooth and completely incorporated, pour the ingredients in the small bowl back into the saucepan and whisk it all a bit more. Bring it up to a boil and then drop it down to low for 3 to 4 minutes. I kept mine on just a hair longer than that. We’re making a vanilla custard, and the cornstarch and milk mixture will begin to thicken right away. Unfortunately, my soon-to-be-custard also began to scald right away even though I was stirring like crazy. Because I didn’t want the custard to take on a burnt taste, I poured the custard into another saucepan and continued heating it on low. And I stirred until the cows came home.

When it’s nice and thick, add a teaspoon of vanilla and stir some more. Take everything off of the heat and allow the custard to cool to room temperature. The custard will initially seem far too liquid-y to be, well, custard. But as it cools, it will set and become even more thick than it already is.

Typically, Disney snack recipes will have us melt chocolate using a double boiler method on the stove top. Today’s recipe calls for us to pour 2 cups of chocolate chips directly into a saucepan and, over very low heat, allow the chocolate chips to melt. Low and slow is the way to go about doing this, or you and I will enter up with burnt chocolate on our hands. And there’s just nothing fun about burnt chocolate. 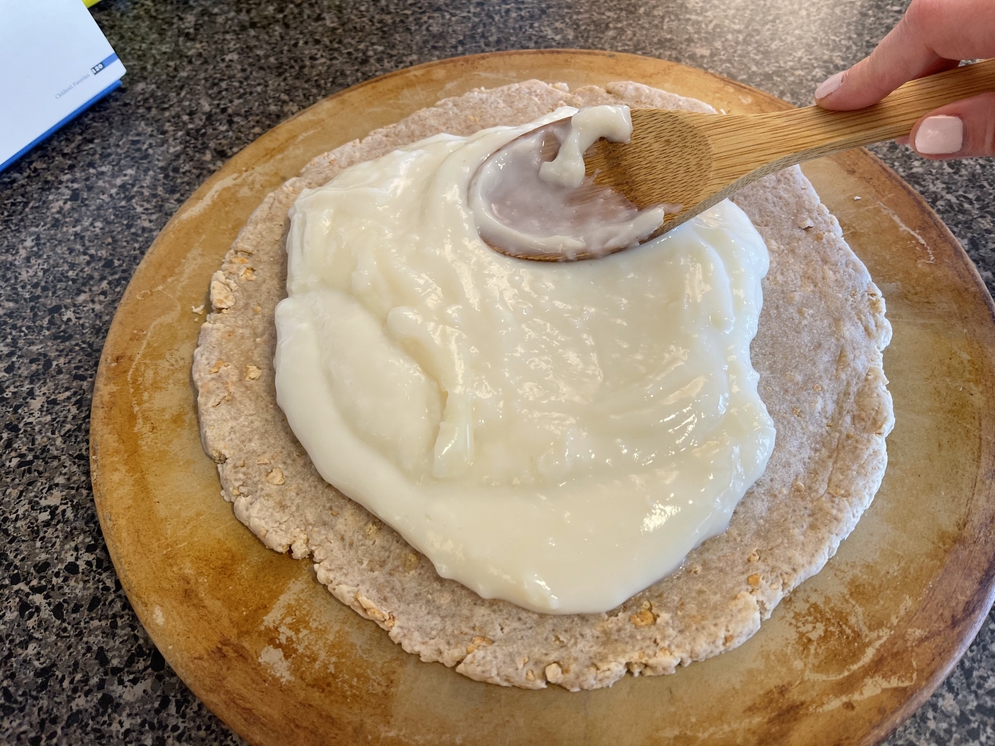 Once the custard is cool, slather it onto the desert pizza crust. I chose to leave a little bit of crust around the edge… we’re making a pizza, right? The crust doesn’t necessarily have cheese or sauce on it, so the custard initially did not reach the edges of the pizza. I say initially because this is part of the recipe that went differently than expected: the custard had a mind of its own. 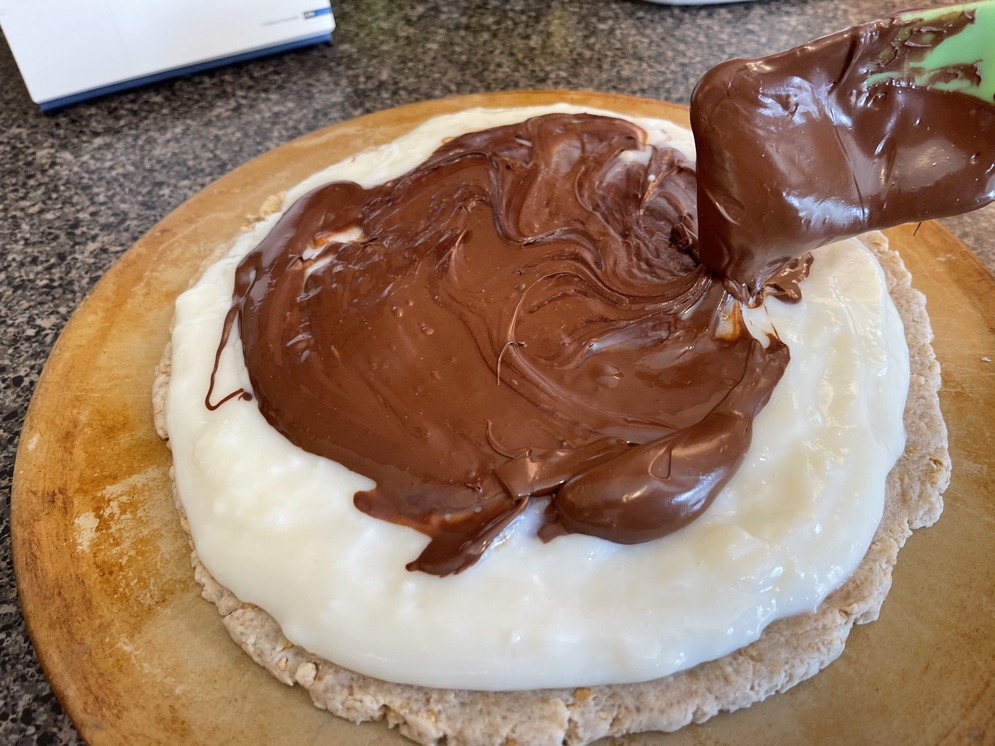 I poured the custard onto the crust and spread it out. Our next step is easier said than done. The recipe asks us to carefully spread the melted chocolate onto the custard. Now you and I both know that this step will be near to impossible. That custard is movable, and even though it’s thick, it’s still somewhat liquid-y. So I started spreading out the chocolate on top of the custard, and for the most part, it worked. But there were spots in which the liquid-y custard and the melted chocolate just did not get along. I did the best I could. Serenity now.

The entire pizza goes back into the 400° oven for three or four minutes, or until the mini-marshmallows are a nice, toasted golden brown. It took about five or six minutes for my marshmallows to reach that point, but I kept a very close eye on them the entire time. Marshmallows in the oven can go up in flames in no time, and I wasn’t about to have that happen for our weekend snack.

Once the marshmallows are golden brown, we can pull the pizza out of the oven and let it cool for 15 to 20 minutes. 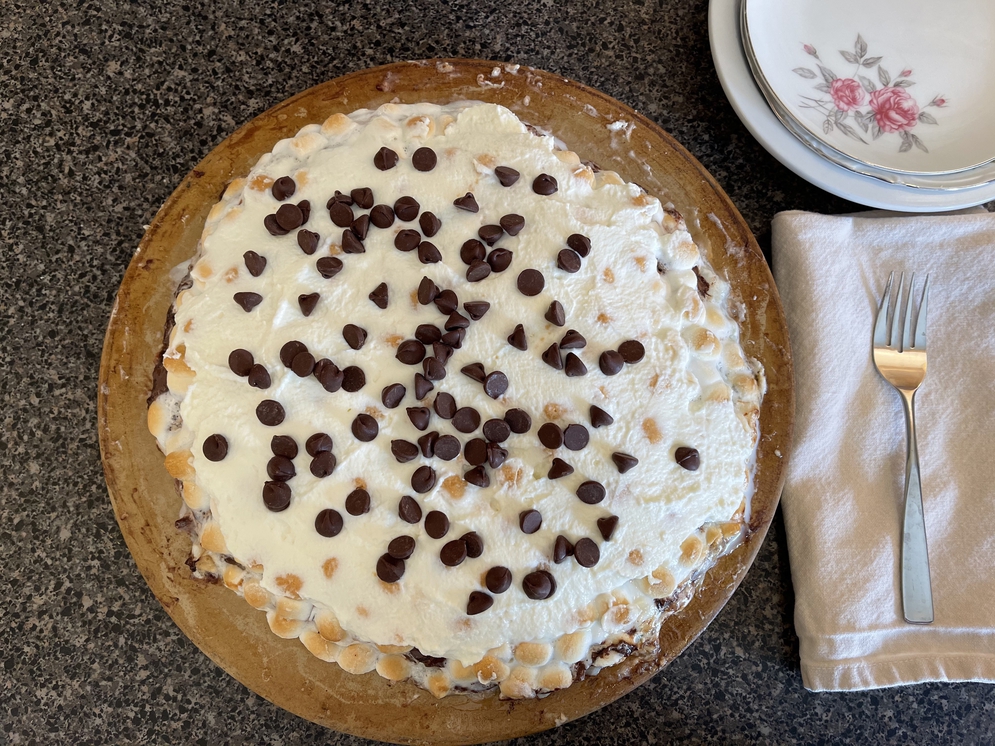 During the baking process, the mini-marshmallows expanded. And the custard oozed. And everything looked a bit wonky when it came out of the oven. I took a pizza cutter to the edges and tried to clean things up and make it look just a bit more like a pizza once things had cooled, but there was only so much that I could do. 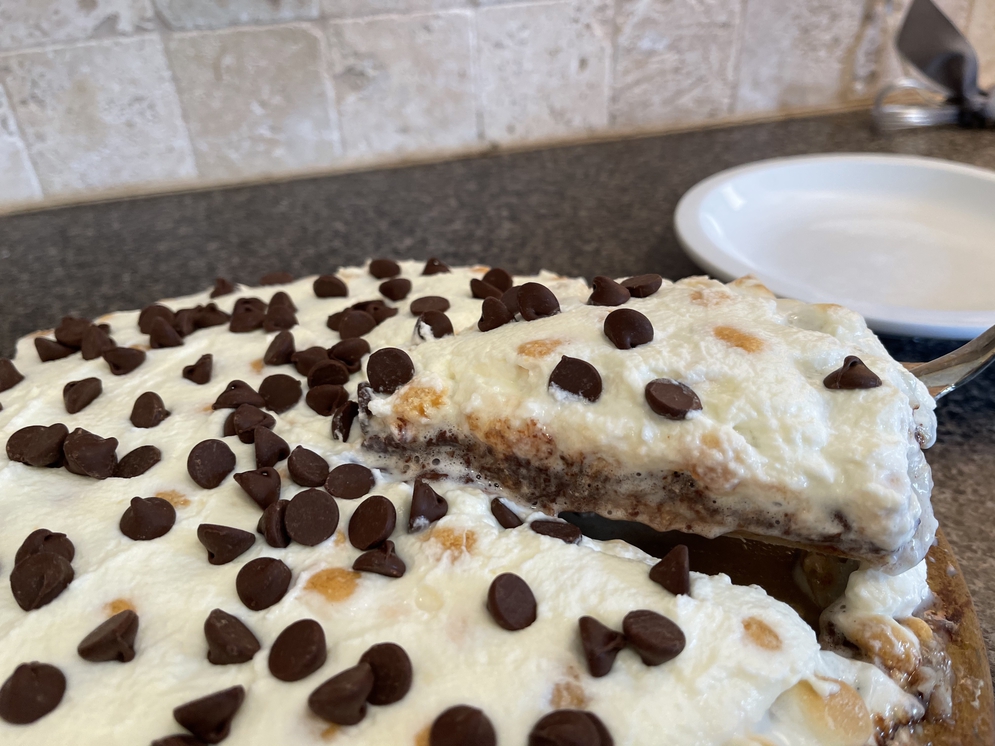 I cut a slice of the desert pizza, and attempted to place it on a plate. Easier said than done. The whole thing was a bit mushy and very soft, and, as it turns out, still somewhat liquid-y. It just didn’t seem to set up the way that you would expect it to; the way that you know it had to have been to be served in a restaurant.

That being said, this mess on my plate had a pretty good taste to it. As you might expect, the overwhelming taste was straight up sweet. There were different levels of sweetness, but it was definitely sweet upon sweet upon sweet. A kid would’ve loved it completely. This big kid enjoyed half a slice or so. 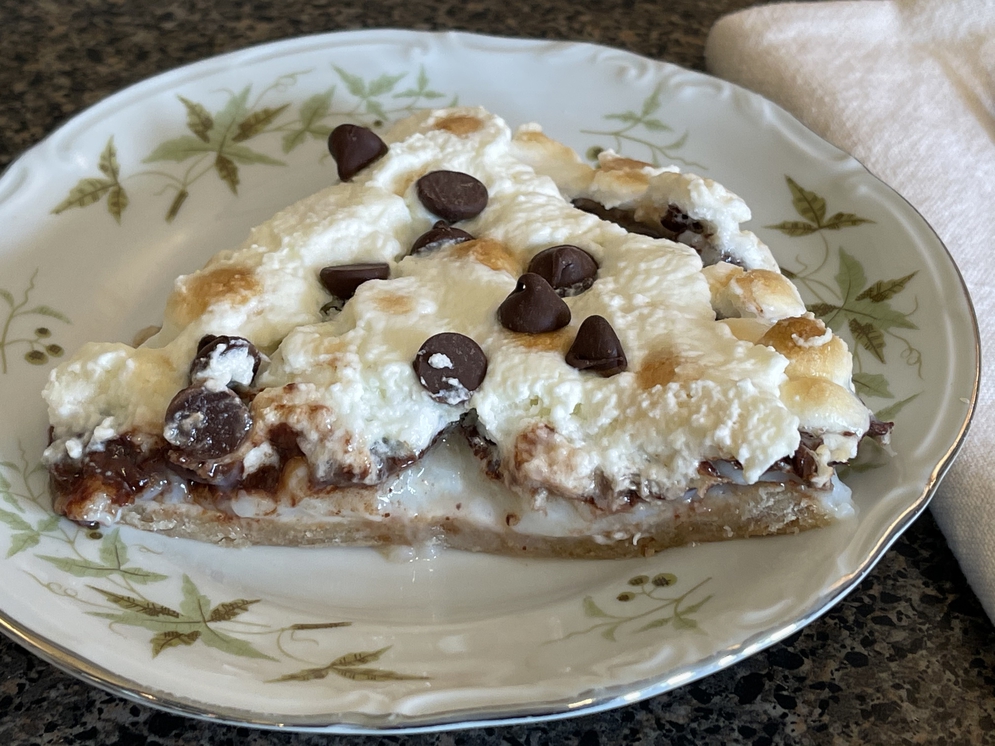 I decided to pop the whole pizza into the fridge to attempt to get it to solidify at least a bit more than what it currently was. Spending time in the fridge did help; it allowed me to cut a piece that actually looked like a slice of pizza. It held together better, and still tasted like you would expect it to. But even then, it ended up being a bit of a mess. 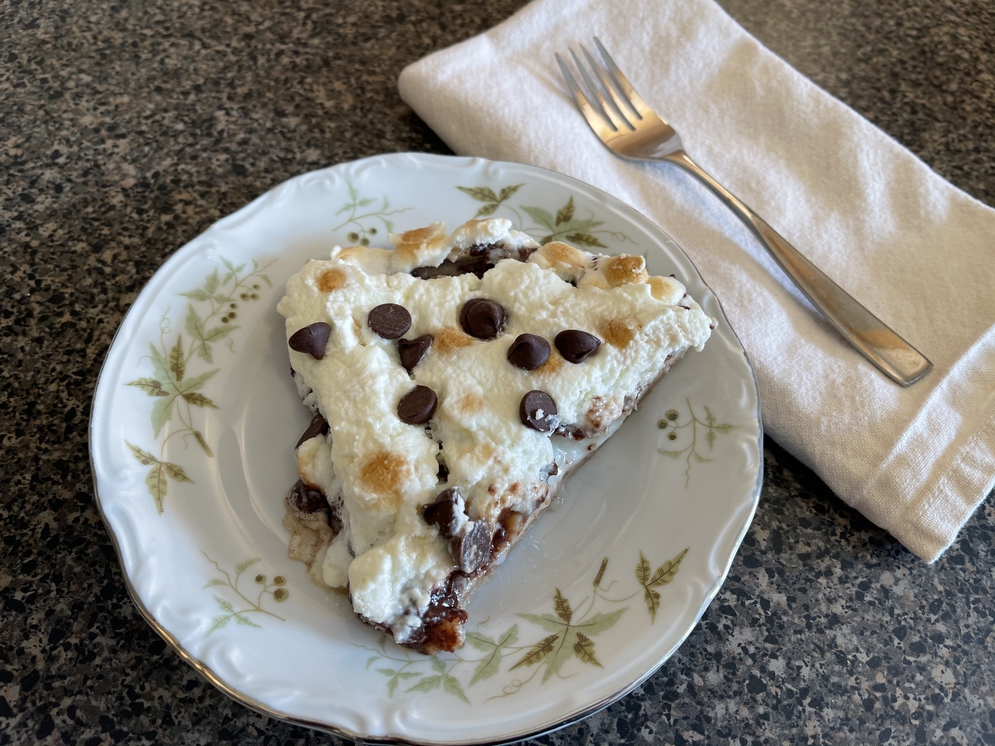 Don’t get me wrong; this dessert was fun to make. All those chocolate chips and mini-marshmallows? You can’t go wrong with those. That being said, I expected more from this recipe. I expected a legit dessert pizza. What resulted was a bit messy and askew and not quite in a solid form. It was a bit of a close but no cigar situation. 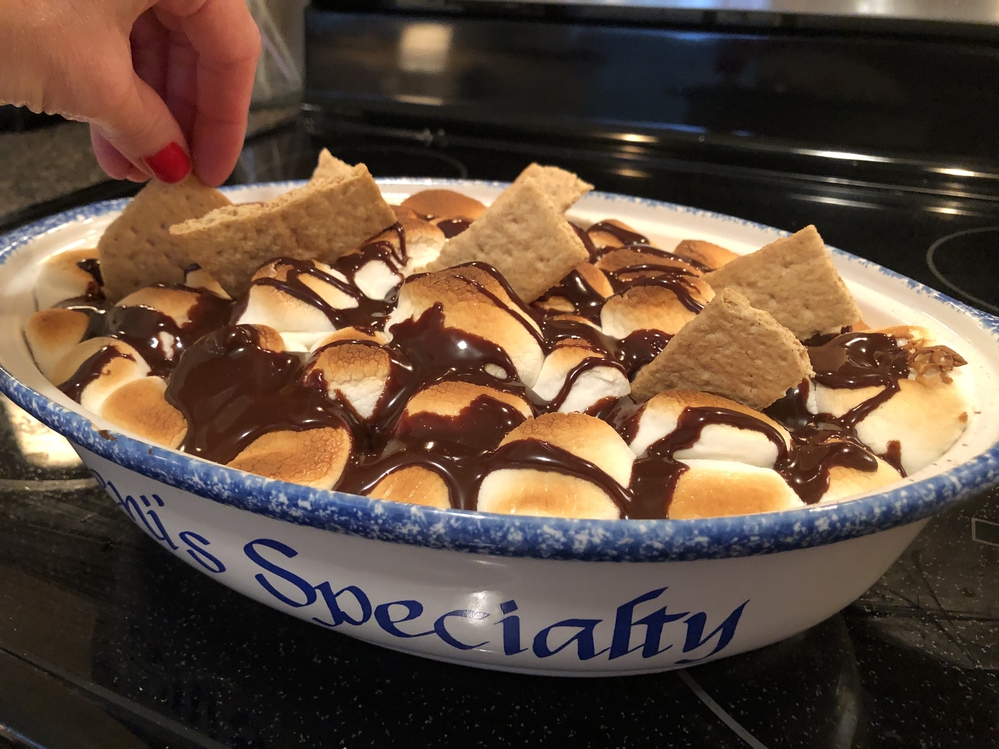 If you’ve got a hankering for mini-marshmallows and chocolate, and you don’t feel like making the Children’s Dessert Pizza is the way to go, might I suggest last year’s Inside Out-inspired Joy’s More-is-More S’mores (pictured above)? It’s layers of brownie and mini-marshmallows and chocolate sauce and graham crackers. What’s not to love? It’s like a giant s’more fresh from your oven.

But, like my son’s 12th birthday family dinner at CiCi’s, while today’s recipe wasn’t what was originally expected, there was beauty in it. The thought of dumping all of those fun and super-sweet ingredients into a recipe just to see what came out was a lot of fun.

No matter what fun (and possibly sticky) adventures you have this weekend, I hope that there’s joy in the journey. Life can be bumpy sometimes, and it can take turns that we don’t see coming, but I’m hoping that you and I are able to see the beauty that surrounds us even in the midst of something that’s a bit wonky.

What are you baking up in your kitchen these days? Please let me know in the comments section below. 🙂

Thanks so much for joining me for this journey this weekend, friends. Have a great one!

Ready to try Pizzafari’s Children’s Dessert Pizza? The recipe is below:

The Fry Basket Booth at Food & Wine Stole My Heart