Legoland New York has announced 2022 will be a “season of awesome,” with a new water playground, new shows, plus new and expanded holiday celebrations.

The park opened on April 8, 2022 for its first full season, with the expectation that this will be the biggest vacation year ever as people begin traveling again.

“We are thrilled to welcome travelers from all over the state and world as Legoland New York Resort opens for the season,” said Kathy Hochul, New York State governor. “This unique family friendly destination has been a boon to the local economy and is an integral part of the state’s tourism industry. The future is bright for Legoland New York, and we look forward to many successful seasons to come as we continue our economic comeback from Covid-19.”

A parade of characters and model citizens initiated the “countdown to awesome,” and the grand opening celebration ended with a dazzling pyrotechnic display.

The first families to enter the park were treated to a pre-opening live show with brass band, participated in a building competition, enjoyed live music and giveaways, and had the opportunity to learn the park’s opening dance. 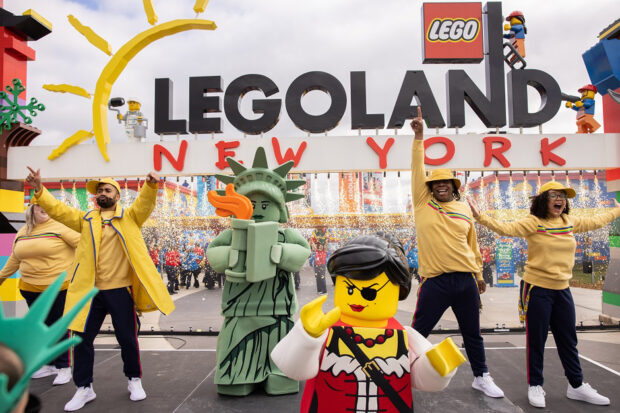 Legoland New York announces additions to the park throughout 2022:

“New York State is the perfect destination for family fun, and I Love NY is excited to invite and welcome visitors to come be a part of it all” declared Ross Levi, executive director and vice president of New York State Division of Tourism and Empire State Development. “With so many families eager to plan a getaway, we are proud to partner with this world-class venue to kick off a memory-making vacation season that will exceed expectations.”

Those who would like to extend their stay can book a vacation package at Legoland Hotel, just steps from the park entrance.

“As we gear up for our first full year of operation, the park’s most exciting 2022 developments were inspired by our guests and our team’s dedication to providing even more fun with each new season,” said Stephanie Johnson, Legoland New York Resort divisional director. “Whether it’s a family’s first time visiting us, or their hundredth, they can always expect something new and exciting to enjoy when coming to Legoland New York Resort.”