The Grand Carousel is the oldest ride at Kings Island in Mason, Ohio, and now it’s undergoing a big restoration ahead of the park’s 50th anniversary.

The 96-year-old carousel was originally located in Cincinnati’s Coney Island Park before being moved hoof, tail, and saddle to Kings Island. 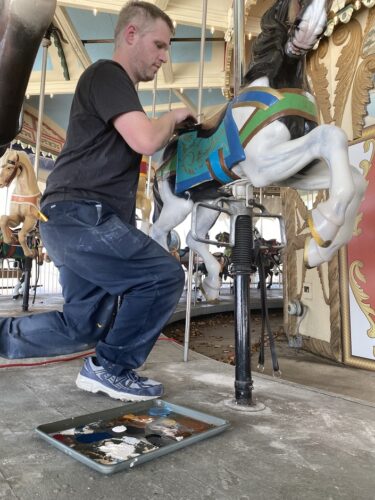 When Kings Island opened in 1972 the carousel, which features 28 jumping horses and 20 static horses, was among the first rides to be placed in the park.

A flood in 1937 caused major damage, breaking some of the horses from their posts and sweeping them down the Ohio river.

In an effort to return the original pieces to the park, a reward was offered and parts and pieces were returned from as far away as Memphis, Tennessee.

Now, as the 50th anniversary draws near, All Around Carousels LTD artists are sanding and cleaning the horses, replacing lost jewels, repairing hoofs and tails, and touching up the paint and varnish for a fresh, new look.

The carousel’s band organ is also being restored in a three-month-long project led by Wayne Holton, with the assistance of Don Stinton and Ted Walfart. Holley Millroy is doing touch ups on the band organ’s murals.

Kings Island will open for the 2022 season on April 15 for passholders, and on April 16 for all guests.