Get ready for the biggest party at Universal Studios! The 2022 Universal Orlando Mardi Gras celebration marks the return of the epic weekend concerts, full parade, and delicious food after a two-year absence. This annual festival at Universal takes place February 5 – April 24, 2022 and is perfect for date night.

In this post, we take a look at what to expect at Universal Orlando’s Mardi Gras including the food, parade, and concerts — and most importantly, include tips on how to make it an epic date night.

Besides the parade and concerts, delicious flavors abound. Each year Universal Orlando seems to improve the Mardi Gras food and beverage. It certainly has expanded from the days of being just a few booths in the New York area.

There are ten Mardi Gras food and beverage booths throughout Universal Studios Florida. Get those toes tapping and march throughout the park to explore all the delicious flavors. Let’s review the location of each booth, some of which are food trucks, and then I’ll share with you some of the best Mardi Gras food that my husband and I enjoyed on our date night.

Each food both opens around 11:00 or 11:30am daily. A friendly reminder, there is only one drink per person per ID. Be sure to use your annual pass for a discount on the food. There is also a helpful Mardi Gras Food and Beverage Card which offers savings regardless or whether you’re an annual passholder. Beignets and other traditional Cajun food at Universal’s Mardi Gras

Here are the best Food and Drinks At Universal Orlando’s Mardi Gras that my husband and I enjoyed the most: The Traditional Bloody Mary, spiked with New Amsterdam Vodka is not only photo-worthy but is a fun drink to share on your date night. Choose from a MILD or WILD version. The WILD has Louisiana hot sauce and Sriracha hot chili sauce. The 24 oz version is $18.00 which seems a little pricey, but it’s double the normal drink size making it shareable. Plus, it comes topped with what amounts to a small snack platter. Note, the smaller drink sizes just come with a celery stick and lime wedge garnish.

Pro-tip: If you want to take advantage of the Mardi Gras souvenir refill cup, make your first purchase a beer with the cup. It will be a lower initial cost than getting a cocktail, and you can use the same cup to get the refill price on beer and mixed drinks.

Beignets are available at both the New Orleans booth and the French Quarter Market. These are good if you’re looking to satisfy a craving, but the desserts inside the Mardi Gras Tribute Store are better and more memorable. More on that later. What is the Mardi Gras Food and Beverage Card?

A Universal Orlando Mardi Gras Food & Beverage Card can be purchased at any Mardi Gras food booth. It does not have an expiration date and gives you some savings on your food and beverage purchases.

Here’s how it works:

If you are an Annual Passholder you will receive your normal AP discount on eligible food purchases. Stretch out your hands and get ready to catch a tons of beads. Make your date night enchanting and grab a spot along the parade route about 30 – 45 minutes before parade time.

The parade starts by the Pantages Theater and Mel’s Drive-In, then marches up the Hollywood Area and into the New York area. If you want to see the parade right when it starts, then get your spot in the Hollywood area. Otherwise, if your goal is to catch both the parade and the concert (on select nights) then get a parade viewing spot near the Music Plaza Stage which is near Monsters Cafe and Rip Ride Rockit Roller Coaster. Important Tip: An unofficial party usually kicks off about three hours before parade time. For example, we visited on opening night. The parade kicked off at 7:45pm, but at 4:30pm parade performers came out of the backstage gate near the exit of the Tribute Store. The performers spread out throughout the New York area and French Quarter market, creating a party atmosphere.

Have some fun together striking a pose for some great photo opportunities. If you’re feeling bold ask the parade performers how you can earn some beads. 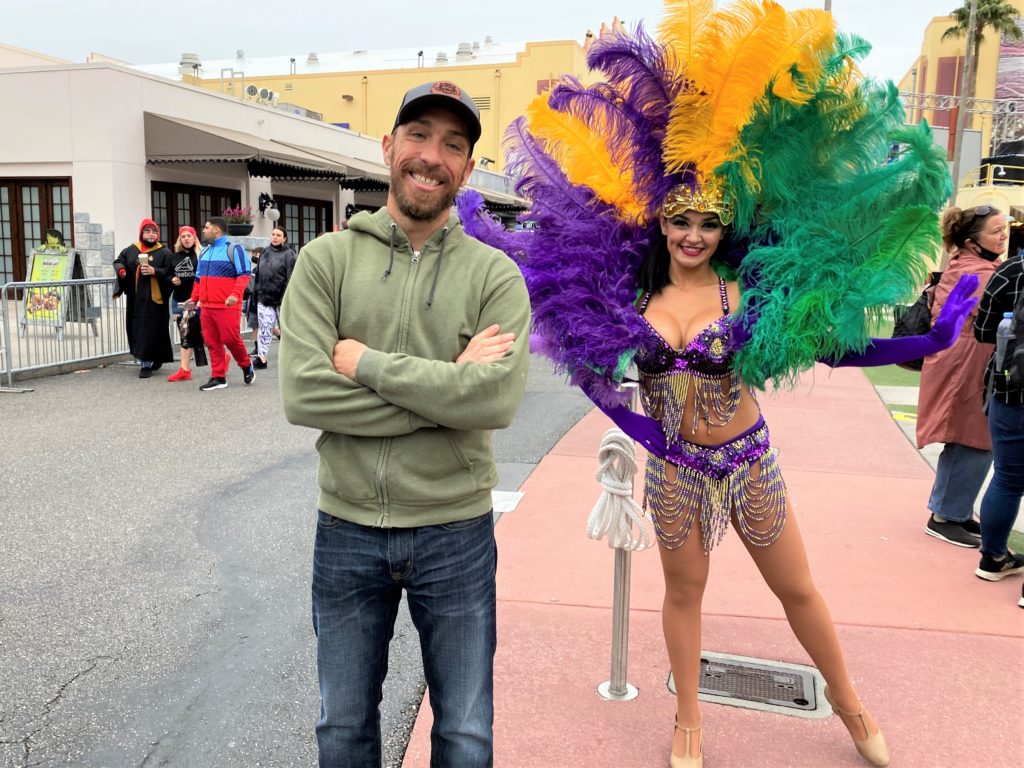 How to Ride a Mardi Gras Parade Float

Make epic date night memories from atop one of the spectacular floats. Toss beads to the crowd while you make your way through the entire parade route – it’s unforgettable. A limited number of spots are available per night. Reservations can only be made in-park via the Virtual Line™ function in the Universal Orlando app.

The whole experience takes about two hours, and it is possible that you won’t be completely done until just before the concert, if not right after the concert starts, so factor this in. Be sure to hydate beforehand — throwing these beads during the entire parade route can wear you out!

The concerts are back! Universal Orlando always attracts a dynamic lineup for their Mardi Gras concerts. The performances take place on Saturday nights and other select Friday and Sunday evenings. Each concert kicks off at 8:30pm.

I suggest getting a spot in the Music Plaza Stage lawn by 7:30pm. Arrive with a drink and food in hand from one of the nearby booths. You’ll be able to catch the parade while you wait for the concert. Bring a picnic blanket or towel so you can sit comfortably on the plaza lawn.

Universal’s Mardi Gras April concert lineup will be announced at a later date.

During your Mardi Gras date night, take a stroll through the Mardi Gras Tribute Store. Located in the New York area of the park, this store changes themes throughout the year, highlighting the park’s current events. You should see this place during the holidays.

This year for Mardi Gras the Tribute Store has been transformed into a float factory. As you stroll around the themed store browsing Mardi Gras merchandise, you can see sketches of Mardi Gras parade floats and props. If you’re really big fans of Universal Orlando you will probably notice hidden details and tributes to the park’s history.

Don’t miss the back section of this massive store, where you’ll walk through a hallway that is adorned with details of the history of Universal’s Mardi Gras, which started in the 1990s. And save room for dessert! There are a ton of delicious sweet treats in the back room including chocolate-dipped bacon, layered cake served in a souvenir Mardi Gras shaker, and so much more. Whether you want to keep the party going at CityWalk or just prefer not to spend the money on tickets to get into the park, there are some festivities to enjoy outside the park gates. At a few bars at CityWalk you can enjoy some of the signature Mardi Gras beverages found inside the park.

For something sweet head over to Toothsome Chocolate Emporium for a special Mardi Gras milkshake. The main event for Mardi Gras at CityWalk is at Pat O’Brien’s. Recreating the original dueling pianos bar in the heart of New Orleans, Pat O’Brien’s brings a Mardi Gras flavor all year that is kicked up a notch this time of year. Special food and beverage items plus Mardi Gras decor make this an epic addition to your date night.

This itinerary is based on visiting on a Saturday night with the concert at 8:30pm and the parade at 7:45pm.

Be sure to hydrate and take breaks, I try to have one full cup of water in between each alcoholic beverage. If your epic night takes place on a Saturday night you’ll need to be prepared for crowds, so just relax together and let the good times roll!