Star Wars: Cargo Bay is located in Disney’s Oceaneer Club, the kids’ club area reserved for children ages three-12. Cargo Bay is an interactive, tactile, play space filled with creatures from a galaxy far, far, away. Tony Giordano, show director for Disney Cruise Line, explained this area of the ship ties directly to the story playing out at Star Wars: Galaxy’s Edge in the parks. Giordano said, “All of these creatures are being taken to Batuu for Bina, the proprietor of the creature stall, in the Black Spire Outpost marketplace.” Quinn is a character in the Cargo Bay who cares for the creatures and trains the children to be handlers. Of course, as this is a ship in the “Star Wars” universe, Quinn and the children discover that Resistance stowaways Rey and Chewbacca are also on board.

Giordano described more of the story for us, “There is a problem with one of the creatures, and it bites Quinn. Chewie and Rey recruit the children to help treat Quinn when a rathtar gets loose in the ship’s hold. Rey asks if anyone is Force sensitive, and they all work together to use the Force to get the rathtar back into the cargo hold.”

Therefore, Star Wars: Cargo Bay connects directly to sequel-era of the “Star Wars” timeline with Batuu in Galaxy’s Edge. The Star Wars-themed land in the Disney Parks is set specifically after the events of “Star Wars Episode VIII: The Last Jedi” (at least at Walt Disney World). Rathtars first appeared in “Star Wars Episode VII: The Force Awakens,” the first film of Disney’s sequel trilogy. Some of the creatures found in the Cargo Bay are similar to those found at Galaxy’s Edge, including the worrt and a caged Loth-cat adorably sleeping with its stuffed porg doll. This is also where you’ll find Imagineering’s first and only animatronic porg. Cargo Bay also connects with the “Star Wars: Galaxy of Creatures” series of animated shorts found on the Star Wars Kids YouTube Channel. 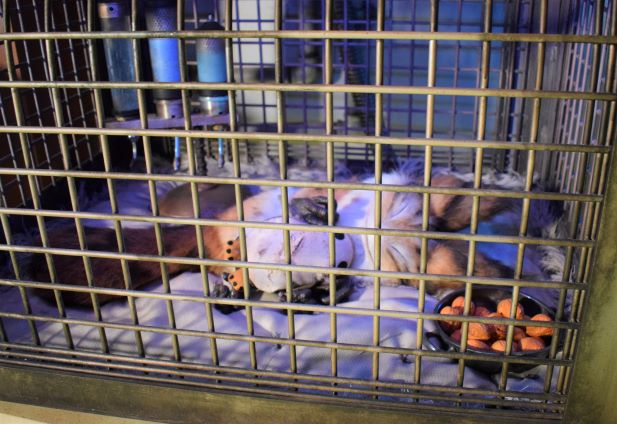 Again, Star Wars: Cargo Bay is located in the kids’ club targeted at children ages three-12, but adults can, and are encouraged to, visit during the open house hours of Disney’s Oceaneer Club. Tony Giordano added that Cargo Bay is meant to allow kids to explore and imagine the Star Wars universe through play. “My daughter learned ‘Star Wars’ from the parks,” Giordano elaborated. “She saw a dianoga and then wanted to watch the films.”  Today’s adults were first introduced to Star Wars in film over 40 years ago, and imagined themselves in that universe through play. Now the circle is complete, with kids introduced to “Star Wars” through the parks and play, and then seeing the films. So, dank farrik! What can adults do when they’re kicked out of the Oceaneer Club? Happy beeps, they can head to Star Wars: Hyperspace Lounge. 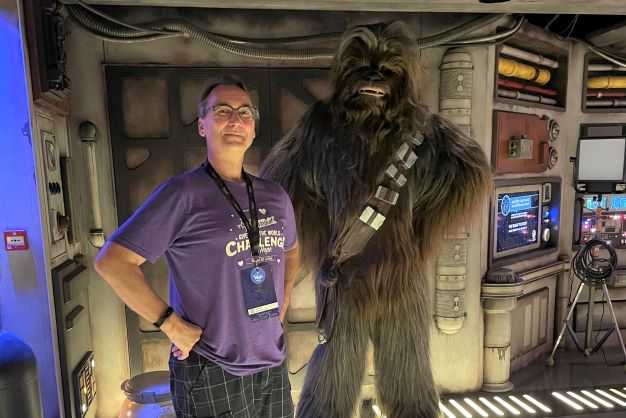 Disney realized adults who grew up with “Star Wars” are hungry for their own space to play, and created Hyperspace Lounge. This is a sleek, high tech, adult bar (imagine the casino at Canto Bight or Dryden Vos’ luxury yacht), that whisks passengers through hyperspace to different locations around the “Star Wars” universe every seven-10 minutes. However, you won’t find any characters or creatures popping up at this cantina. Pam Rawlins, executive producer for Walt Disney Imagineering said, “The entertainment here is the screen behind the bar and the view.”

Disney Cruise Line worked with the special effects wizards at Lucasfilm’s Industrial Light and Magic (ILM) to create the viewport scenes and hyperspace jump effect. Unlike Star Wars: Cargo Bay, Hyperspace Lounge is not limited to any one particular point in the canon. “It’s more of a celebration of all of Star Wars” said Rawlins. 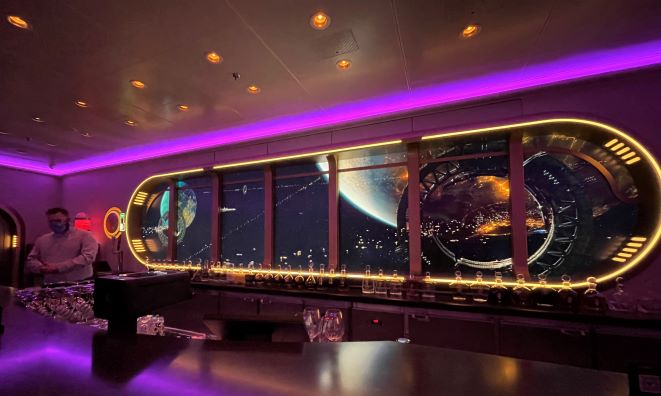 During our visit, the hyperspace jumps included Coruscant with the Star Tours Starspeeders and the Halcyon of Star Wars: Galactic Starcruiser fame gliding by; Batuu with X-Wings; TIE fighters; a First Order Star Destroyer (from “Rise of the Resistance”) in orbit; and a small skirmish between the Resistance and First Order broke out above the planet Endor.

Astute fans will also see Imperial-era shuttles, Star Destroyers, and TIE fighters around Darth Vader’s planet of Mustafar, and the Mandalorian’s Razor Crest above Tatooine, as well. While Hyperspace Lounge jumps around in space (and time) Rawlins assures there is continuity between planets and ships. “When a planet is set at a specific time, you won’t see ships that don’t belong to that timeline,” Rawlins explained. So don’t expect to see the Holdo Maneuver over Mandalorian-era Tatooine, or the Death Star rising above Endor.

Finally, we can’t talk about Star Wars: Hyperspace Lounge without mentioning “the most expensive drink in the galaxy.” Once everyone boarded the ship for the Christening Cruise, Attractions Magazine broke the news there was a $5,000 drink listed on the menu. The Kaiburr Crystal cocktail costs $5,000 and is served in a Camtono safe (pictured below, to the left of the bubbling liquids). The drink may not fit directly into “Star Wars” canon, but it now holds a special distinction in “Star Wars” lore. Evidently, the $5,000 includes a visit to Skywalker Vineyards on the property of “The Maker” himself, George Lucas’ Skywalker Ranch. 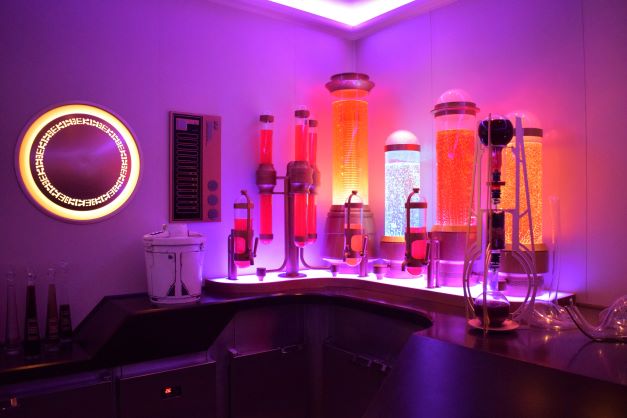 Are you excited for to see Star Wars on the Disney Wish? Let us know what you are looking forward to seeing on the ship. The maiden voyage of the Disney Wish sets sail on July 14, 2022. Click here for more information about the ship, and be sure to visit our YouTube Disney Cruise Line Playlist for all our videos.