The skyline over Hersheypark will be a whole lot brighter as two “sweet” new rides – the Jolly Rancher Remix roller coaster and the 360-degree spinning ride, Mix’d Flavored By Jolly Rancher – make their debut in summer 2022.

The Hershey, Pennsylvania park announced the rides on February 22, stating they will be open during all four seasons following their summer debut.

Hersheypark’s “reimagined coaster for the senses.” 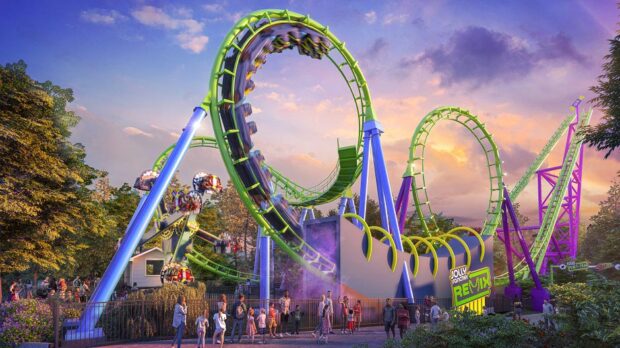 Joining the park’s 14 existing roller coasters, Jolly Rancher Remix is a “reimagined coaster for the senses” that boomarangs forward and backward on a “flavorful” track, blasting through a flavor tunnel before making six inversions in just 90 seconds.

The ride will be backed by a jammin’ soundtrack cranking out sweet tunes. There are five randomized versions – billed as “flavors” such as Watermelon or Green Apple – making each experience different. Lighting, music, and an actual scent will vary with each ride, too.

Mix it up on Hersheypark’s upcoming family attraction. 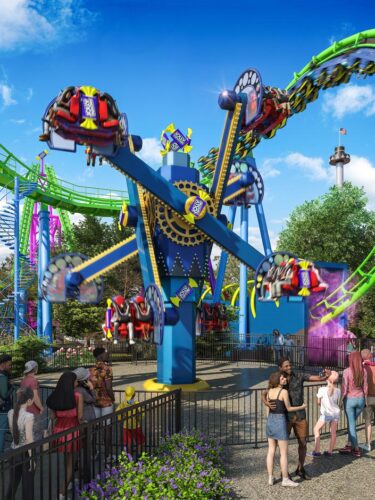 Mix’d Flavored By Jolly Rancher is a family-friendly addition to the park, featuring a four-armed mechanism that rotates each arm a full 360-degrees, while mixing in lifts, drops, and terrific views as each ride vehicle dodges the others.

The attraction will be located right next to Jolly Rancher Remix, in the heart of the park and close to the Storm Runner coaster.

The height requirement is “Reese’s” (42 inches).

Hersheypark is also making preparations for it’s annual Springtime In The Park event, which starts on April 2. Summer season runs from the end of April into September.

Hersheypark In The Dark Halloween event takes over before transitioning to Hersheypark Christmas Candyland, for a full season of family fun.

A discount of 35 percent is being offered on one-day tickets when purchased online using the Best Price Of The Year offer.

Those who would like to extend their stay can save up to 40 percent with a summer getaway “Best Rates of Summer” offer at Hershey Lodge resort, The Hotel Hershey, and Hersheypark Camping Resort. Other packages are also available