We’ve known that The Mandalorian’s helmet can be seen in Galaxy’s Edge, but is that Grogu’s Beskar chain mail armor below it? And has it been there the whole time?

When you visit Star Wars: Galaxy’s Edge at Walt Disney World or Disneyland, you’re visiting the time between “Star Wars: The Last Jedi” and “Star Wars: The Rise of Skywalker.” “The Mandalorian” on Disney+ is set about five years after “Star Wars: Return of the Jedi,” and about 25 years before the time of Rey and Kylo Ren.

Since Star Wars: Galaxy’s Edge first opened on both coasts, and before we even knew who the Mandalorian (AKA Din Djarin) was, his helmet and the gun he used in the first season of the show have been on display inside Dok-Ondar’s Den of Antiquities store.

Inside Doc’s at Disney’s Hollywood Studios, there’s a banner featuring a stylized version of the Mandalorian mythosaur. But it’s what’s just above the banner that just now has people talking. It’s a small piece of chain mail. And it’s even shaped somewhat like a small cloak. No one thought anything of it until a recent episode of “The Book of Boba Fett”, where we learned Grogu (AKA Baby Yoda) now wears some chain mail armor made of Beskar that Din Djarin had made to protect him. 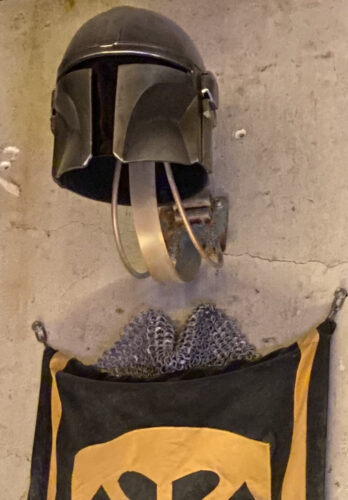 We confirmed through our archived photos that it’s been there since Galaxy’s Edge opened at Hollywood Studios. (The banner and chain mail aren’t in Doc’s at Disneyland.) Has Grogu’s Beskar chain mail cloak been hiding in plain sight this whole time? We went straight to the source to find out.

Former Imagineer Eric Baker was a creative director at Disney when Galaxy’s Edge was being built and he is the one who purchased and installed many of the props in Galaxy’s Edge. So we asked him, is that supposed to be Grogu’s armor, or is it just part of the sign? Baker told us, “It’s just coincidence.  It was chain mail I bought from a vendor in India for decor.”

There you have it. Mystery solved. But it’s such a convincing coincidence that we think the Force must have influenced Baker’s decision.

But it’s a theme park. It’s all in fun. You are free to believe that’s actually Grogu’s armor. Whether you choose to believe it or not, the questions remains, how did Doc get The Mandalorian’s helmet? Did Din Djarin get a new helmet, or did he die between the time of his show and “Star Wars: The Last Jedi”? Hopefully time will tell and we will get to see it all play out on Disney+ or at the movies.