Universal Orlando Resort invites guests to let the good times roll from Feb. 4 through April 16, 2023, and there are many reasons to visit during Mardi Gras at Universal Orlando, including concerts, food, and other entertainment.

Halloween Horror Nights (HHN) and the winter holiday celebration come to mind as solid seasonal events at Universal Orlando Resort. However, Mardi Gras at Universal has emerged from a minor seasonal event to arguably the best annual event included with theme park admission in the Orlando area, with Universal Studios Florida functioning as the main base for the resort’s Mardi Gras activities.

What makes this event worth a guest’s time? Several significant reasons deserve consideration:

On select weekend evenings, top musical artists in a variety of genres perform at Universal Studios Florida. These concerts take place in the Music Plaza Stage area. Based on history, many of these musical artists draw large crowds, so guests should plan accordingly. If you want a good viewing spot, you will need to arrive early for the concerts, which start towards the end of the theme park day and usually last up to one and a half hours.

Many styles of music make up this list of concerts, which serve as this event’s highlight for many Universal Orlando guests.

Around sunset or later most nights, the Mardi Gras Parade creates a fun street party atmosphere for guests at Universal Studios Florida. This year, the parade happens every night of Mardi Gras except March 31st. 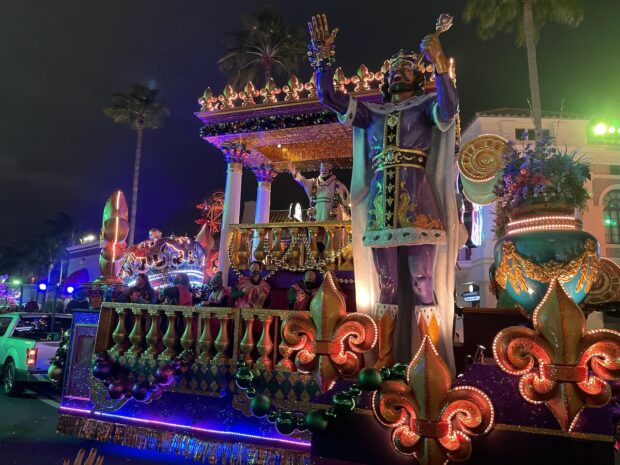 The Universal Orlando Mardi Gras parade consists of floats constructed in partnership with Kern Studios, a company that specializes in float design. Typically, the parade consists of 12 floats, with entertainers performing for the crowd between each float.

Fun Fact: If you know where to look at Universal Studios Florida, you can see a window honoring Blaine Kern. 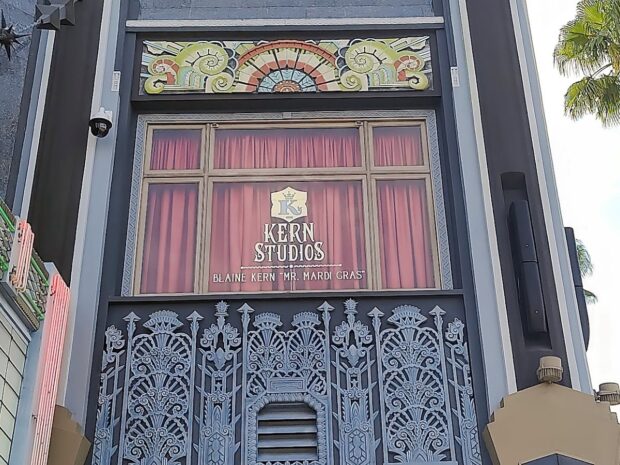 This year’s parade theme, “Mythical Realms of Mardi Gras,” builds off the ideas of fantastical creatures like dragons, phoenixes, and unicorns. Six new floats based on this theme will be seen during this parade along with six returning traditional New Orleans-inspired floats, like the two-story Riverboat float and the King Gator float. 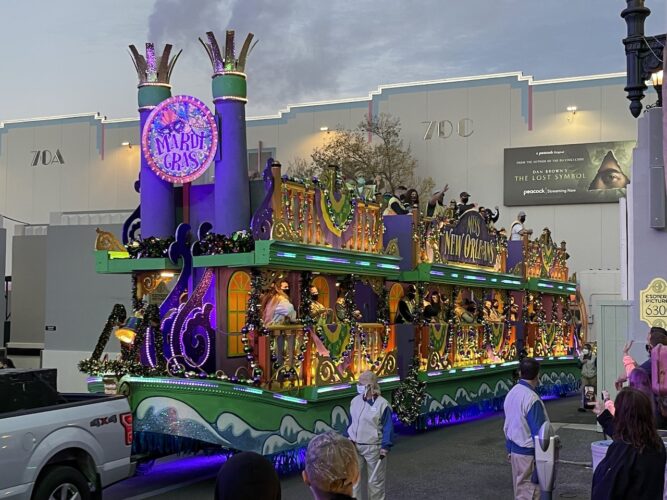 Beads are another fun aspect of Mardi Gras at Universal Orlando. But before some of you become alarmed, beads here are acquired in very family-friendly ways, including being thrown to the crowd by guests riding the floats as they come rolling through the parade route. Yes, you read that right: “guests” throwing beads to the public – and you have a chance to ride one of these floats.

Universal Orlando offers a few different ways to be selected to ride the Mardi Gras parade floats. Guests can attempt to earn a spot via a virtual queue in the Universal Orlando mobile app. For the first time, Universal Orlando also offers a ride-and-dine package for $84.99 per person (plus tax). which includes a three-course meal at one of four participating restaurants and a reserved spot on a parade float (age and height restrictions apply). Click here to make a reservation.

The Mardi Gras party atmosphere also leads up the nightly parade, with musicians playing throughout the day at Universal Studios Florida who specialize in the signature sounds of genuine New Orleans jazz bands. They will play on a steady schedule in the New York area near the Jimmy Fallon attraction and sometimes in the Production Central area. 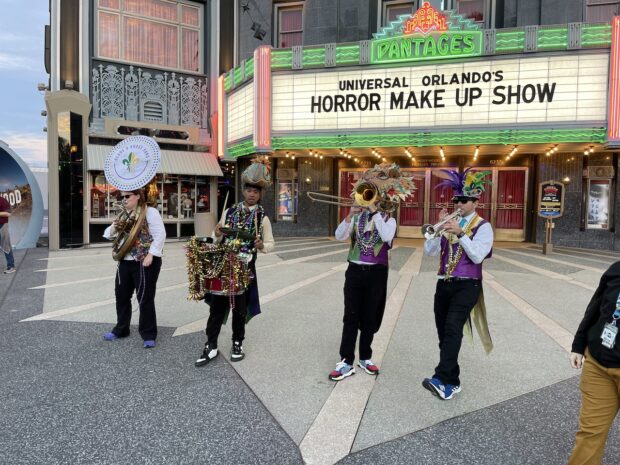 In the afternoon before the parade, the parade performers will also appear in their Mardi Gras outfits. Some will visit guests as stilt walkers, while others will have beads and small trinkets to give away. 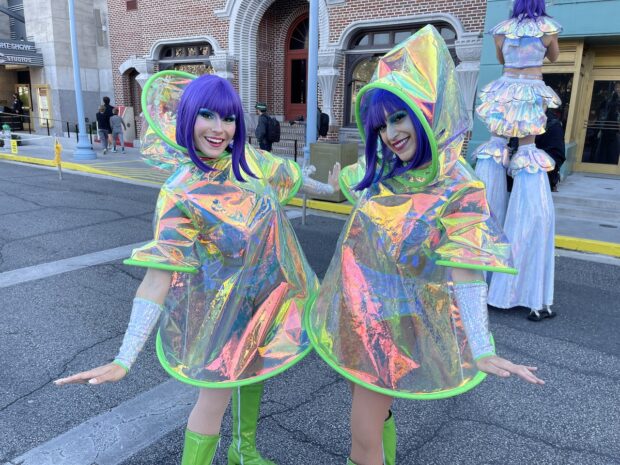 If your group can’t stay for the parade or wants to avoid large crowds, meeting the performers and hearing the music will give you a good feel for Mardi Gras celebration at Universal Orlando. The performers also love to interact with guests will pose for photos. You will usually find the entertainers near the Music Plaza Stage in the hours before the parade starts.

Starting in 2020, Universal Orlando began designing a Tribute Store for the Mardi Gras season. These well-themed merchandise stores make excellent walk-through attractions, and this year, the Tribute Store moves to an all-new space in the Hollywood area of Universal Studios Florida. The theme for this year’s store beckons guests to an international jazz celebration. From there, guests venture into the traditional alleyways of New Orleans. A speakeasy-themed area can also be found by guests on their journey through this store. 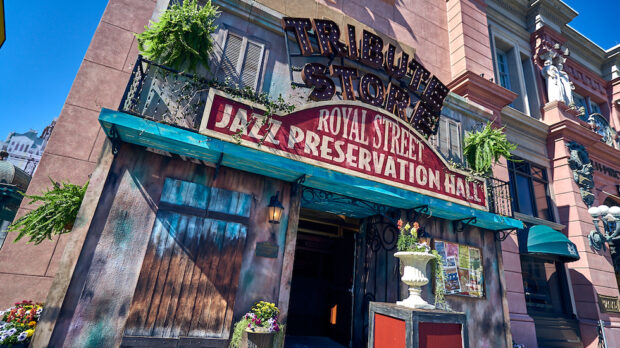 Inside this Tribute Store, new and unique Mardi Gras merchandise will be displayed, including items themed to this year’s Mardi Gras event. The Tribute Store also sells numerous tasty treats. 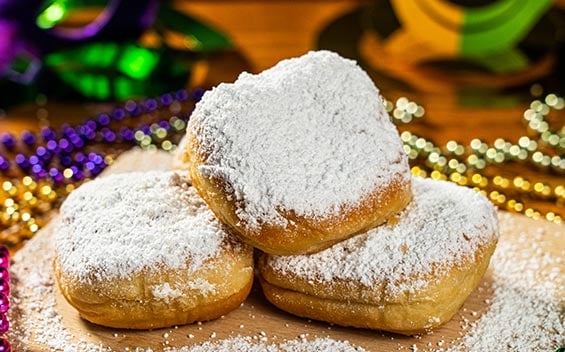 Each booth is themed to a region of the world and its cuisine, like New Orleans, Belgium, Brazil, and other countries that creates the backstory for the more than 50 tasting-sized samples at this event.

This year, guests at Islands of Adventure park will also have at least two food tents to enjoy Mardi Gras staples like gumbo and jambalaya, and even Universal’s Volcano Bay will sell a Muffuletta Long Board Pizza. Some additional food items that Universal Orlando announced are a crawfish boil, beignets, a shrimp ceviche tostada, a mofongo flight, and an Indonesian black coconut rice pudding with mango. The best reason of all is that (except for food and beverages) everything is included with your park admission for the day. In addition, Universal Orlando offers a limited-time discounted food and beverage card to help guests save money when they visit the Mardi Gras celebration.

Will you be attending Mardi Gras at Universal Orlando this year? If so, please let us know in the comments below.