This spring, the anticipated Connections Cafe will become the new home of Starbucks at Epcot. The first of five new marquees was installed at the site of the new café and eatery on March 9, following the same design as the Creations Shop right across the breezeway.

Concept art shown at Destination D23 last fall showing a large mural and what could be the Starbucks, right, inside Connections Cafe.

Disney Imagineer Zach Riddley described the new fast-casual restaurant and adjoining cafe as “inspired by the core Epcot idea of ‘connecting’ – by the common bond we share over food and the gathering of people across cultures.” More information has been given since the news of the marquees on March 9, as Riddley took to social media to share an early concept rendering for the Cafe and Eatery. 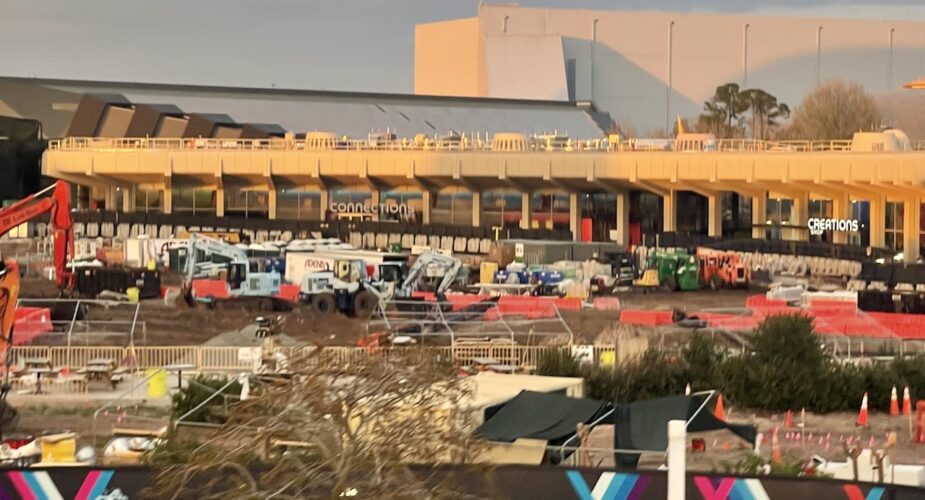 A look at the construction on the other side of the wall from Creations Shop, right, and the soon to open Connections Cafe, left.

Like other Starbucks locations throughout Walt Disney World Resort, this Starbucks will be designed to fit the theme of its surroundings – utilizing light and color as part of the interior aesthetic, matching that of its “sister store,” Creations Shop. Riddley also pointed out that the show kitchen depicted in the concept art he shared will be responsible for making a variety of baked goods, all of which will be available for purchase at the Connections Eatery. To make way for Starbucks to move to its new location in World Celebration, the current location, Traveler’s Café in World Showcase will close this spring.

As a blast from the past, here’s a look inside Epcot’s old Starbucks location in the Fountain View and the Electric Umbrella restaurant, which was where the new Connections Cafe will be!