Performers, dressed in African-styled bright, vibrant, colorful garb, are seen dancing and entertaining the audience at the lower level.

A woman in a regal-looking African-styled robe then comes on stage and belts out the opening Zulu-language chant of the “Circle of Life,” drawing the dancers to the stage.

Like the opening scene of Disney’s 1993 animated movie “The Lion King,” where the animals are drawn to celebrate new life, Disneyland’s newly adapted stage show “The Tale of the Lion King” has a similar opening.

From its forest setting to the Swahili language interweaved in dialogue and lyrics, colorful dress and dance styles, Disneyland’s newly restaged musical celebrates life inspired by African and African American Black culture, told through the re-enactment of “The Lion King.”

After a media preview, Disneyland Resort Creative Director of Live Entertainment Susana Tubert said they wanted to tell Simba’s story in a new and unique way separate from the movie and the Broadway stage show.

Disneyland’s “Tale of the Lion King” is a 25-minute musical and theatrical stage adaptation and truncated version of Disney’s famous movie.

Disney first introduced the “story theater” show in 2019 at the outdoor Paradise Gardens stage inside Disney California Adventure but overhauled parts of it during the time off caused by the coronavirus pandemic.

The newly rehashed show moved to Disneyland’s Fantasy Theater stage and featured most of the major characters, elements and arrangements of the popular songs from the animated film.

There’s Mufasa, the king of the Pride Lands. Simba, Mufasa’s son, and the heir of their kingdom. Scar, Simba’s uncle, and the jealous and villainous brother of Mufasa and second to the throne.

Other characters from the movie appear and break into song — Timon, Pumba (Hakuna Matata) and Nala, Simba’s friend and future queen (Can you feel the love tonight?). Missing are the movie’s B-characters — the trio of talking hyenas, Zazu and others.

Mwongozo, the lead narrator of the traveling troupe called Storytellers of the Pride Lands, narrates the story of Simba’s journey to becoming king (Circle of Life) throughout the show.

The performers are dressed in colorful, vibrant costumes and hairstyles and African-styled headwear.

A large media screen enhances the artistic set design and production at the back of the stage.

The show’s dance choreography by brothers Kevin and Marcel Wilson is where “Tale of the Lion King” shines.

The duo dance team, who has performed and choreographed for the likes of Beyonce and Janet Jackson, incorporated several elements of African and African American dance styles with the show’s cast.

In an interview with Spectrum News, each of the main characters has a unique signature dance move and way of dancing, said Kevin and Marcel.

The movement of Scar, the antagonist, is rigid, controlled and deliberate. His, and the dance movements of his company of hyenas, are lower to the ground.

This dichotomy can be seen when the characters burst into song and dance in “Can’t wait to be king” and “Be Prepared,” Kevin said.

“It allows you to see the two styles with the hip-hop and the stepping and the Krumping all coming together,” Marcell said. “It’s like ‘West Side Story’ — the Sharks vs. the Jets.”

“We wanted to bring it to the world we know,” Kevin added. “We wanted a fresh take on African dance. Everyone has seen it. You see the derivative, the movement, and the style, but there was also some jazz funk — the Krumping, the stepping…the freestyle.”

The “Tale of the Lion King” is a truly original piece, something Disney’s creative team was intentional about, said Paul David Bryant, the show director. 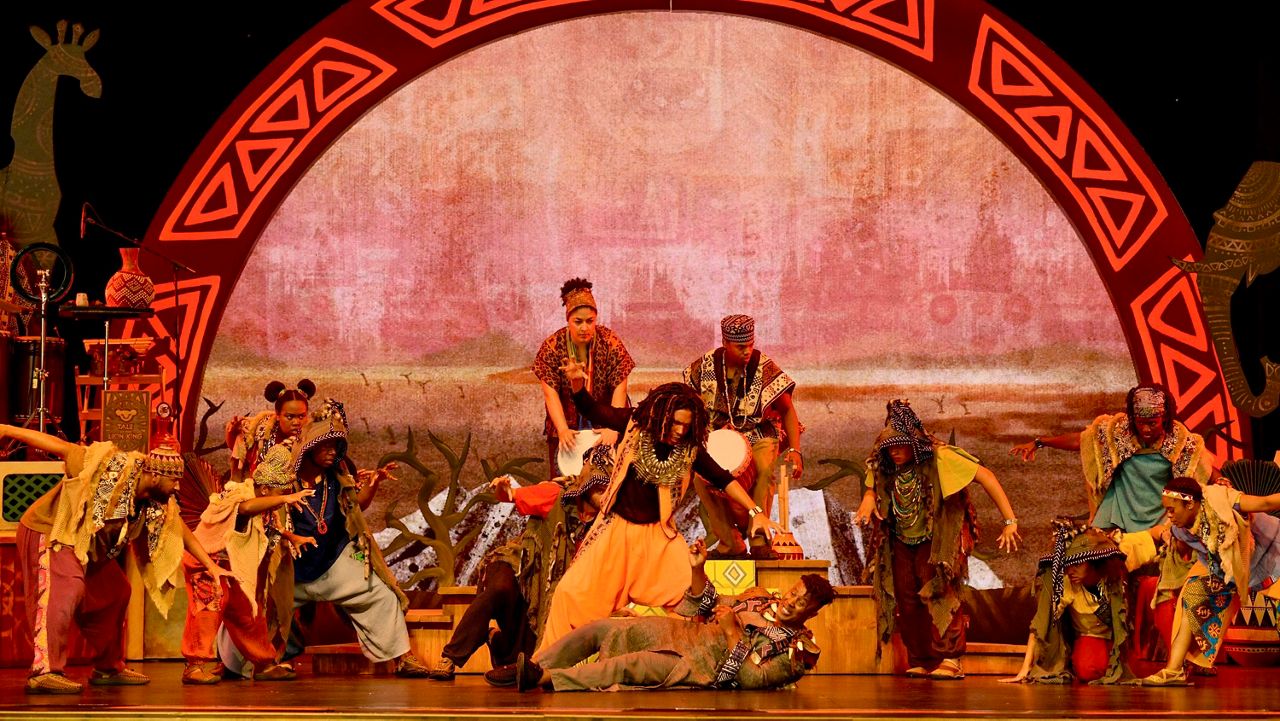 Bryant said in some ways, the “Tale of the Lion King” is an origin story.

In a world before movies and television, Bryant wants people to imagine what it was like seeing a 20-member traveling troupe of performers come into town and entertain a crowd.

In this case, “Tale of the Lion King” is a re-enactment of a show about how a lion cub became king.

“It’s almost like [the theater group] told the story before Disney thought of making the movie,” Bryant said.

The show will run Thursdays through Mondays at the Fantasyland Theatre in Disneyland.