For the third year in a row, Disneyland Paris resort collaborated with Spain’s glass packaging waste recycling company, Ecovidrio, to raise public awareness of recycling and eco-consciousness, and this year they once again put a distinctly Disney spin on their efforts.

For World Recycling Day, the two companies created Disney character-themed “igloos” out of glass packaging waste, each of which were installed in one of 31 Spanish cities for month-long exhibition, starting in mid-May, 2022.

Along with the igloos, the companies created a four-meter-high replica of Sleeping Beauty Castle out of 300 kilograms (661 pounds) of recycled glass, which they installed in Boadilla del Monte – 24km (15 miles) west of Madrid – in early June. 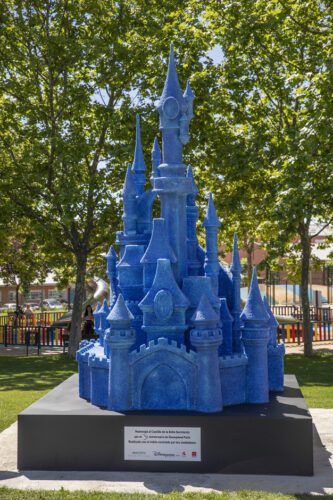 “We have been working together with Disneyland Paris for three years now,” said Borja Martiarena, marketing director of Ecovidrio. “At the heart of both companies is the awareness and mobilization of young people, children, and families to build a better world together. That is visible every time we take to the streets with these fun recycling locations. We hope that they have great impact and are well remembered by the families who participate.”

Kate Boyle, vice president Sales & Distribution at Disneyland Paris, added, “Disneyland Paris’s commitment to the environment is a tradition in our company, which began with Walt Disney himself and which we continue to grow every day. We are very excited to collaborate for the third consecutive year on this project. It is a very significant year for us, as we are celebrating the 30th anniversary of Disneyland Paris, so we wanted the 2022 campaign to be even more special and magical.” Boyle announced miniature versions of the Disney Character recycling locations would be available for purchase, and proceeds will benefit the Aladina Foundation’s projects, which support children suffering from cancer and other serious illnesses.