Visitors to Orlando will be treated to a bit of Disney magic starting May 31, 2022 as a new animated art display featuring Mickey Mouse, Minnie Mouse, and other Fab 50 characters comes to International Drive, along with a new Walt Disney World Store.

The larger-than-life, ribbon-like banner features favorite Disney character depicted as golden sculptures, which come to life across the top of the Hollywood Plaza garage on I-Drive (at the junction with Sand Lake Road), Kathleen Prihoda, Manager, Communications & Public Affairs shared on the Disney Parks Blog.

More characters and celebrations will be added to the display over time.

“We took a lot of knowledge from setting up the 50th art installations in our parks and the Orlando International Airport, and wanted to spread a little of that magic out into the world,” Will Gay, design director with Disney’s Yellow Shoes Creative Group told the Disney Parks Blog. “It all started with a little idea and a question – could we do this? Could we turn this into a dynamic art display bigger than anything we’ve ever done before?”

A new Walt Disney World Store will be located inside the building, offering merchandise, commemorative souvenirs, park tickets, and, for the first time ever, an interactive Disney Vacation Club Virtual Discovery Station. 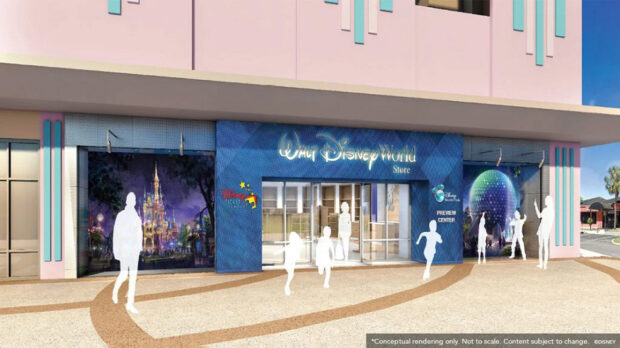 The floor-to-ceiling virtual discovery station screens allow visitors to “explore” the theme parks, resorts, and Disney Cruise Line destinations across the world through the use of virtual tours, photo galleries, and videos.

Watch for the artistic ribbon and store along the I-4/International Drive corridor as Walt Disney World celebrates its 50th anniversary, dubbed “The World’s Most Magical Celebration.”