CINCINNATI – When most people go shopping for clothes, they’re usually focused on what’s trendy or how something fits their body. Maybe they’re also concerned about how much an item costs or how it will blend into the rest of their wardrobe.

Local fashion designer Marisa Conners thinks about those concerns, too. But as a woman with cerebral palsy, she’s also mindful about factors like how many buttons are on a dress or if there’s a zipper in the back that she won’t be able to reach by herself.

Conners, 25, has loved fashion since she was in kindergarten. But finding clothing that fits her physical needs hasn’t always been easy.

Her solution? Create her own clothing line that caters to women who have physical challenges or disabilities – a demographic that many clothing companies don’t consider.

She debuted her second collection at the 2022 Acceptance Week Fashion Show this spring.

“Anyone should be able to wear something special and fabulous without difficulty,” said Conners, who started her namesake fashion line last year.

Inspired by the styles popularized by designers Michael Kors and Kate Spade, she aims to create “stylish garments” for everyone, not just for those with physical disabilities. But her focus was on making sure her designs could truly be “realistic” options for anyone.

Through her website, a person can customize the garments based on traditional options like size and color, but also personalize them around their specific needs.

For instance, a customer can choose between a zipper or a magnetic closure. They can also add concealed zips and openings for feeding tube access. Comfort is also key, Conners said.

The goal, she added, is to ensure the dignity of people with disabilities.

“Anyone can and is welcome to purchase my customized designs, whether or not they have a disability,” Conners said. “But Individuals with disabilities should be able to wear whatever they feel comfortable with but not have to sacrifice the quality of the clothing. That matters most to me.”

From cradle to the runway

Conners’ love of clothes and style started at an early age. She recalled playing fashion video games on the computer when she was just 3 years old growing up on Cincinnati’s west side.

Like a lot of kids, she loved to play dress-up, especially in anything pink. It remains her favorite color and you’ll also see her wearing it.

At Oak Hills High School, she dabbled in graphic design and used a special software to create fashion sketches. The use of digital technology has been important for Conners and helped her find her creative voice.

Conners’ form of cerebral palsy – a neurological disorder – affects her ability to control her limbs. She can walk with assistance and stand independently, but she relies on a wheelchair when traversing long distances.

Marisa Conners (front) discusses art in a gallery space. She is nonverbal and communicates using an iPad and other devices. (Photo courtesy of Marisa Conners)

She relies on an iPad and an alphabetical chart to talk to people.

Cerebral palsy doesn’t affect any of her cognitive functions. Nor does it hinder her desire to achieve her dreams of building her fashion brand and eventually owning her own studio.

“I never let cerebral palsy stop me from doing what I love and following my dreams,” she said.

Conners got her big break in 2021 during the inaugural Acceptance Week Fashion Show in Harrison, Ohio. It’s part of an annual event focused on increasing public perception of people with disabilities.

The event debuted in 2018. Its founder, Raileigh Legner, was a sophomore at Harrison High School. The idea was born out of volunteering with students with diverse needs since she was in middle school, Legner added.

“The more I work with her and hangout with her, the more she inspires me,” Legner said about Conners, describing her as one of the most self-driven people she’s ever met.

“Marisa doesn’t let anything hold her back,” she added. “When she is working on something, she will give it 150% and won’t settle for anything less than perfect.”

The addition of the fashion show was to publicize the importance of creating adaptive and inclusive fashion. “What better way to rock the runway,” Conners said.

For that first fashion show, Conners’ signature piece was a yellow dress with a daisy pattern with a magnetic backing. She put versions of the dress up for sale on her website following the show.

It sold out in 33 days, Conners said.

Make it work for everyone

Conners is fascinated by all aspects of the design process, from coming up with the initial design to choosing fabrics. She enjoys touching the cloth to get a feel for how it would lie on the body and looking at how certain patterns drape in certain lighting.

Her hands are too weak to do much of the sewing and pattern work, Conners said, so she relies on a team to construct the clothes and get them ready for the runway or for sale.

One of those team members is Claire Fledderman, a seamstress who has worked with Conners for the last six months. She heard about the position through a club at the University of Cincinnati. 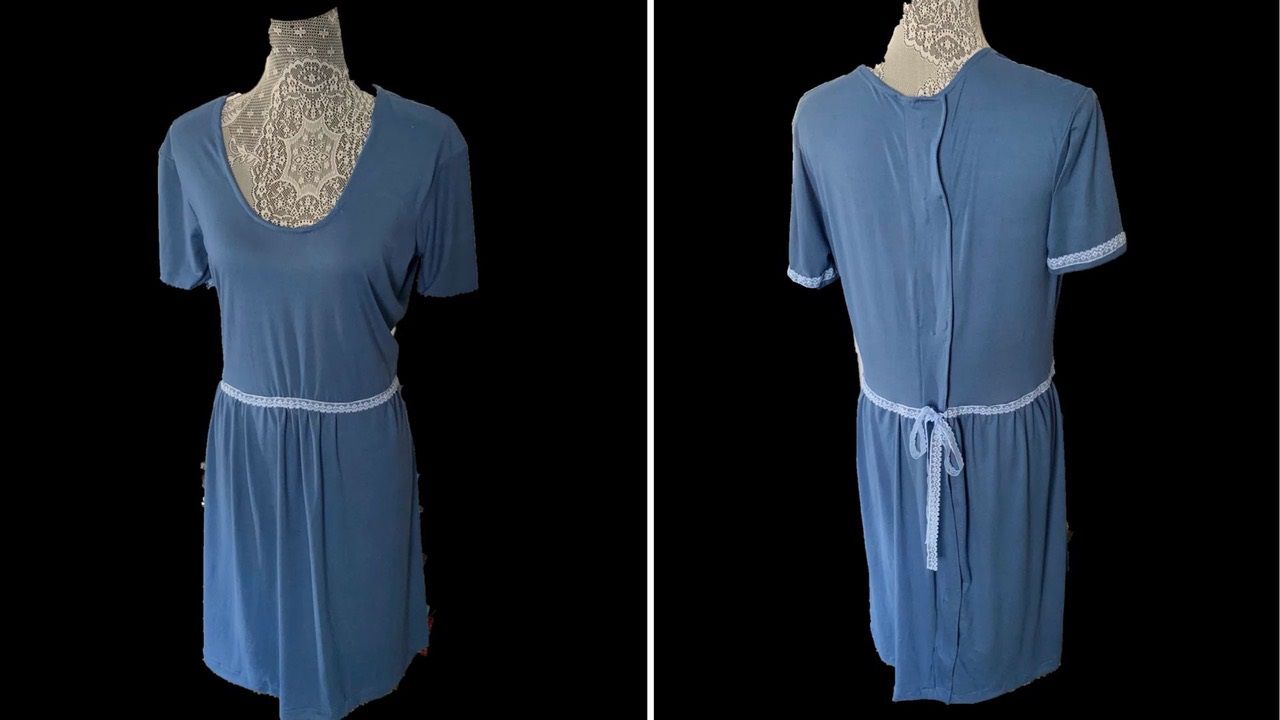 The front and back of an empire waist dress designed by Marisa Conners. Conners’ designs allow a customer to customize elements to fit their needs, such as how it fastens. (Photo courtesy of Marisa Conners)

In her role, Fledderman is in charge of turning Conners’ vision into a reality. She looks at a digital sketch created by Conners that includes the pattern and dimensions, as well as specific notes about the piece. She then sews a mockup based on those specifications and meets with Conners to go over any needed changes after the team has viewed the design in real life.

Fledderman, who has since graduated from UC, studied entrepreneurship with a minor in fashion design. When she applied for the job, she only knew that Conners needed a seamstress and worked in adaptive fashion.

She wasn’t really familiar with that concept at the time, Fledderman admitted, but she said Conners’ passion made her excited to help execute her vision.

“Meeting Marisa is really what made me excited about this aspect of fashion,” Fledderman added. “I’m very grateful to have found this opportunity to be able to work with Marisa. She’s so talented and has a really great vision, and it’s just great to have a chance to work with her.”

It takes a village to raise a fashion brand

Conners described her brand as a playful combination of her fashionista style and outgoing personality. The looks draw inspiration from vintage clothing, chic casual fashion and what she described as “girly-girl.” She loves bold patterns and bright colors.

For her most recent collection, “Salem’s Modern Swinging Sixties,” Conners found inspiration from her maternal family and it reflects what they wore in the 1960s. 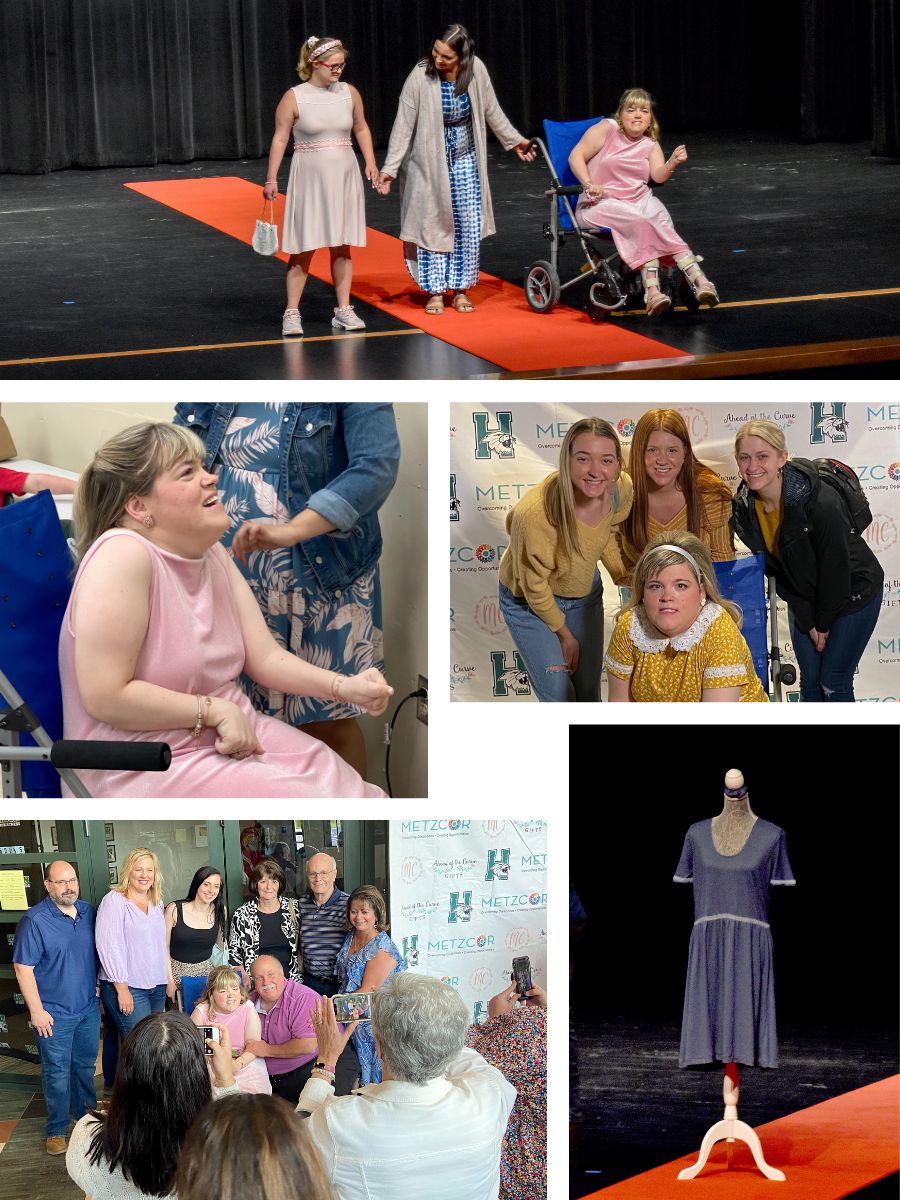 A collection of photos from one of Marisa Conners’ fashion shows. (Photo courtesy of Hamilton County Developmental Disabilities Services)

The collection comprises three customizable dresses, each with its own silhouettes.

Conners wore the third and final look of the collection, Roselle Blush Glitter Sheath Dress, to the event. It’s a modernized version of the 1960s sleeveless sheath dress and has a lot of pink and glitter.

“I rocked the runway wearing this dress,” Conners said confidently.

All three of the dresses are available on her website and available with customizable sizes and closures. She’s also selling a lightweight striped, long-sleeve shirt in a signature color palette, Wisteria, a combination of bright pink and green.

Conners credits a lot of her success to the lifetime of support she’s received from friends, family and agencies like Hamilton County Developmental Disabilities Services (DDS). The organization serves more than 7,300 people with developmental disabilities across the county.

Hamilton County supports people of all ages, along with their families, by providing case management, funding for services, and connecting people to community partners.

Conners works with DDS staff to develop an annual plan focused on helping her navigate daily life, whether it’s finding ways to help further her independence or assisting with her career goals.

“(Marisa) is determined in her mission, and it’s wonderful to see Marisa advocate for stylish and inclusive fashion,” said Lisa Danford, Community Relations Coordinator for DDS. She described Conners’ story as one that can “encourage other people with developmental disabilities to follow and achieve their dreams.”

Conners said she hopes to become a motivational speaker for the agency in the future. To that end, Hamilton County DDS recently put Conners in contact with the Cincinnati & Hamilton County Public Library about taking part in their National Disability Employment Awareness Month in October.

Conners strives to inspire others to achieve their dreams and to further promote inclusion in the fashion industry.

“I’m a big dreamer,” she said. “I refuse to let my disability define me because I am never going to give up following my dreams. Dreams do come true.”