Guardians of the Galaxy: Cosmic Rewind is Disney’s newest coaster, Epcot’s first ever roller coaster, and not exactly what you may expect. This reverse launch roller coaster has been said to be huge and surround us with ‘80s ballads and much more. But, when it comes down to it, this ride is just a lot of fun. While the early cast member previews are happening now, but only for the ride, not the queue or pre-show, these early looks give us a great idea of Epcot’s newest ride.

This review will contain some spoilers. But for a quick spoiler-free example, know this: Cosmic Rewind has the track layout of Space Mountain, the smooth ride of Seven Dwarves Mine Train, the action-packed storyline aspect of Harry Potter and the Escape From Gringott’s, the load and unload aesthetic of Men In Black Alien Attack, the incredible screens of Avatar – Flight of Passage, and a fan-favorite soundtrack from the Guardians of the Galaxy films.

Now, to the spoilers. 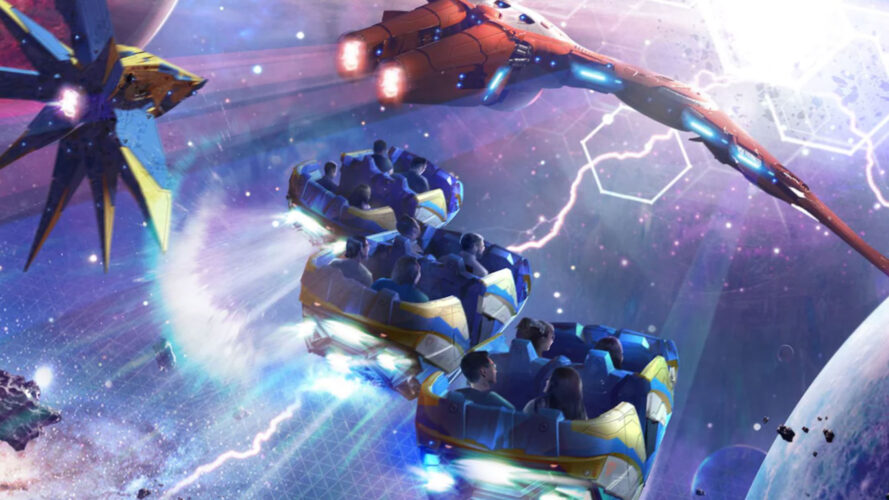 To be honest, this ride is not as thrilling as I think it was sold to be. It is still really, really fun, don’t get me wrong. But, I had assumed the first launch would cement you in your seat. I was mentally prepared to be thrown around corners and tossed off of hills. That doesn’t happen, and that isn’t a bad thing. I was expecting the intensity and fun chaos of The Mummy at Universal Studios Florida.

I personally didn’t feel g’s but it might depend on what effects you! There is a lot of spinning and turning but no inversions and a very slinky-esque shoot off! No big drops either

Instead, this is a story coaster that is aimed at the whole family, as long as you are 42″ and taller. The ride is incredibly smooth, as much or more so than Seven Dwarves Mine Train. Disney has done an excellent job making coasters smoother and smoother over the years (thanks Vekoma). This is no exception. Even the launch is done so in a way that it isn’t jerky. The turns are quick, yet graceful, and it works with the space feel.

There are mild moments of drops, but I never felt my stomach leave my body. There is also a secondary smaller launch, (although it may actually be classified as a fast lift hill, I couldn’t really tell), that kept up the speed of the ride. There is a section where you spin around a moon, and it is comparable to the toilet bowl water slide elements you may be familiar with. This was really, really fun. The spinning motion of the vehicles worked out perfectly for this element. And, since the ride is so dark inside, it was one of the few elements you saw and anticipated.

It was a super fun time and I can’t wait to see what song I hear on my next ride!! pic.twitter.com/wO9kIoYWY4

Overall, this is a family coaster. It’s not a ride to be feared by families with younger children who just barely make the height requirement. If you are confident with your child riding Space Mountain, they can definitely ride Guardians of the Galaxy: Cosmic Rewind. 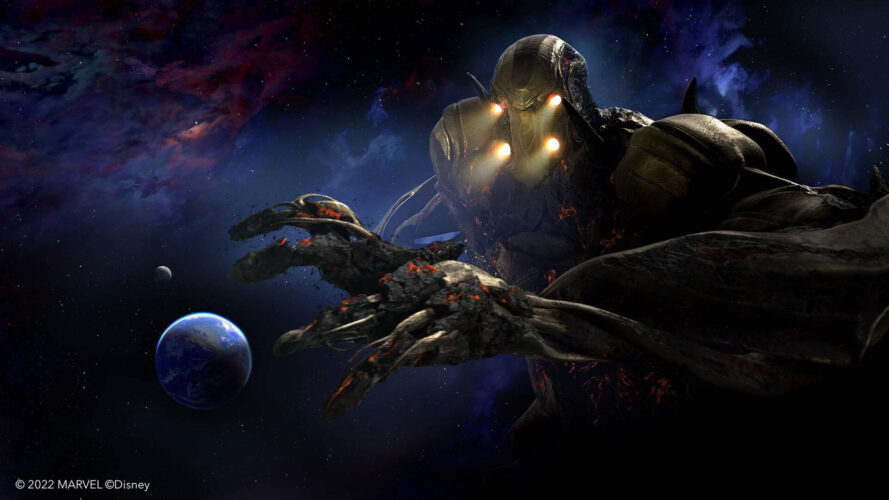 The story aspect is hard to talk about. Early previews did not allow access to the queue or the pre-show. Overall, the storyline was a bit harder to pickup without those elements. From what we understand, Eson, a celestial, wants to get control of an Infinity Stone and change the fate of the Earth. The Guardians of the Galaxy can’t let this happen. I couldn’t understand what Eson was saying for most of the ride, but the celestial didn’t like us or the Guardians messing with them. This involves a lot of massive projection screens showcasing Eson reaching for the Guardians, or us, or the Nova Corps as we attempt to stop this celestial.

Online, people speculated about Chris Pratt’s face not being shown in the ride. This isn’t true, as he is shown prominently many times. But, it sounds like Rocket Raccoon is not voiced by Bradley Cooper.

Disney has already revealed the soundtrack for this attraction:

On my experience, I heard “Disco Inferno,” which was an excellent choice for the pace and feel of the ride. It is the Guardians of the Galaxy after all. It will be interesting to see if there ends up being a guest favorite song for this ride.

Cosmic Rewind offers seats that should be comfortable for guests of nearly all shapes and sizes. The seats are very large, with an easily adjustable seat restraint. The restraints themselves are comfortable and you feel secure without being crammed into a space. I did not see a specific example of how these seats could be modified for accessibility options. But, the vehicle design allows for multiple options. And, the sizing would allow for easier entry-or-exit of the vehicle.

This is an element that surprised me. And, I think seeing the full queue and pre-show would answer my questions. In Disney revealed footage, we can learn about the queue for this new attraction. This preview though started me in the load area of the ride. I was unable to experience any of the true queue or pre-show. But the load area is very akin to the Milano ship from the Guardians of the Galaxy films. It is grungier, with war-torn space tech, not the well-kept observatory-type pictures we have seen of the queue.

But upon coming back to the unload area, it is once again pristine, modern and clean. This immediately made me think of Men In Black Alien Attack at Universal Studios Florida. It appears both rides may share a similar basic storyline of an exhibition gone wrong, where you as the guest are suddenly needed. Then, both rides, at the end of your adventure, are placed back in the original exhibition. The pre-show and queue will certainly help explain that better when they are available.

The entrance into the load area was stunning. The pictures don’t tell the whole story and it is really quite impressive how large the space is. It is also a dual-loading platform, which means more riders and shorter wait times.

Again, I wasn’t able to experience the pre-show or the queue of this attraction. So, speaking solely for the ride, there was little-to-no callbacks to old Disney that we noticed. Terry Cruz did make a surprise cameo though, and I certainly didn’t expect that. The ride moved very fast, with visuals that were full of things to look at. From just one ride alone, I can’t be sure there aren’t hidden Energy Adventure or Horizons elements within. But for this review, I must say I didn’t notice anything specific. Of course, the name Epcot is mentioned, but Guardians of the Galaxy: Cosmic Rewind is based out of Epcot, so this wasn’t a surprise.

Guardians of the Galaxy: Cosmic Rewind is my new favorite ride 😍😍

I think Cosmic Rewind is a great new coaster for Walt Disney World. It implements fun, some thrills, new tech, an air-conditioned ride, it is family-friendly, and it is one of the only ways we can get Marvel at Walt Disney World. I think the early interviews and commercials made it appear faster than you might expect. The speed was good, the length of the ride was great, the visuals were energetic. But, it didn’t reach the thrill level I had anticipated in my mind. This is better for families, and perhaps worse for coaster or thrill nuts.

The scale was immense. I can now fully understand why Disney needed to build a behemoth of a building. You can feel the massive size once you ride. But I do still wish the huge show building had been themed in some way on the outside. The ride is still in testing. We had some difficulty understanding what the characters were saying, but the ride isn’t really open yet. So, we will assume there is still more test and adjust to be done to perfect that.

This will become a major new ride that will demand big crowds when it opens, there is no doubt of that. And, I think this ride will continue to be enjoyed for many years to come. I also expect this to be many kids first big coaster, and it will be an excellent choice. You can feel the quality in the vehicles and throughout the track. The lack of jerky movements will make this more rideable for older adults or those that suffer from motion sickness.

As for the storyline, and its connection to Epcot, we will have to wait for more elements of the queue and pre-show to decide that. But, I can tell you this, it certainly felt like a Guardians of the Galaxy ride.

How Can You Ride?

Annual Passholder previews are coming up on May 8th, and will continue May 9, 10, 15, 16, 18, 19, 20 and the 21st. Guardians of the Galaxy: Cosmic Rewind officially opens May 27th. But, there is always a chance for soft openings to happen around those times. And, while not announced, Club 33 or VIP Tours may also get special access into this attraction early. Best of luck and enjoy the ride!