CINCINNATI – Spring may not officially begin until March 20, but in Cincinnati, the season gets started a little earlier every year with the annual Bockfest celebration.

​Bockfest is a three-day event that celebrates the coming of spring, the city’s German heritage and the local history of brewing, especially of bock beer, a strong Bavarian style lager that was popular in the region during the late 19th and early 20th centuries.

Organizers burn a snowman ahead of the annual Bockfest in Cincinnati. The act is a superstition that aims to ensure good weather throughout the three-day event. (Provided: Bockfest)

The 30th rendition of the festival kicks off Friday at 6 p.m. with the annual parade, which starts outside Arnold’s Bar and Grill – Cincinnati’s oldest, continuously operated bar – and makes its way through the streets of the Central Business District and Over-the-Rhine neighborhoods before culminating at Bockfest Hall.

“We’re excited for the parade, excited for a lot of fun events and we’re excited for bock beer. We’ve got 34 different local bock beers on draft this year, which is amazing. When we started this, we were lucky if we had one or two,” said Steve Hampton, who has been associated with Bockfest for the last 16 years. “We can’t wait for people to taste all these different beers over the course of the weekend.”

This year, the hall relocated to Findlay Park on Vine Street, in the heart of the city’s Historic Brewery District. It will feature a large festival tent, as well as a variety of outdoor areas including an outdoor biergarten.

Holding an event outdoors in winter is always a risky proposition. Back in 2008, a freak blizzard forced Bockfest to shut down early. Ever since then, organizers of the event have taken the “weather into our own hands” by burning a snowman in effigy, as they did this past Friday. It hasn’t failed them yet.

Following the parade, onlookers will witness the ceremonial “blessing of the beer,” and organizers will announce the winners of this year’s top parade floats and costumes. Most of the parade entries are inspired by a few things, such as the “German Renaissance, beer and irreverence.”

The parade is traditionally led by a goat pulling a keg surrounded by people dressed as monks – all three are symbols associated with bock beer.

There’s also a 12-foot rolling wooden “Trojan goat,” as Hampton called it, that has become an unofficial totem for the event. It’s creation was a bit of a happy accident as they originally intended for it to be only about 2 feet tall.

“We couldn’t be happier with it today. It ended up being an amazing symbol of Bockfest and people get excited when it gets rolled out every year,” he said.

From humble origins to a full-on festival

Bock-style beers are historically brewed for special occasions, often religious festivals – Christmas, Easter and Lent, for example. Bavarian Christian monks would consume bock beers as a source of nutrition during times of fasting, such as Lent.

The beer style was also popular in pre-Prohibition Cincinnati, which has a rich German-Catholic heritage. For that reason, several Cincinnati-area breweries made a seasonal version around Lent during that time.

But by the early ‘90s the bock style had fallen out of favor. One brewer that was still making it was the Cincinnati-based Hudepohl-Schoenling Brewing Company. They created Bockfest as a marketing gimmick to promote their new Christian Moerlein bock beer. 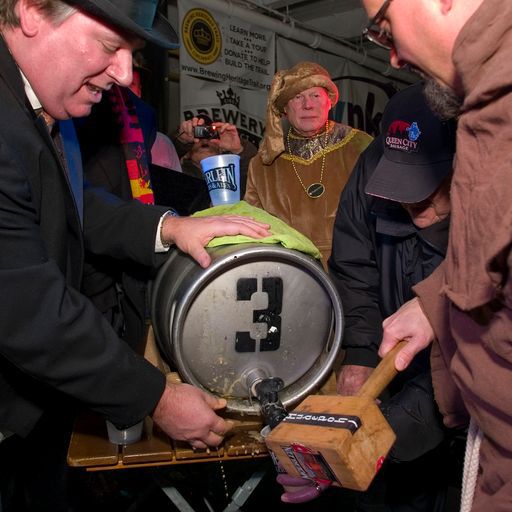 Officials with Bockfest tap a keg during the three-day festival. (Provided: Bockfest)

Back then, the events included a few beer specials and the parade down Main Street, which at that time ended at Old St. Mary’s Church, an old German church. Nowadays, the church sells Lenten fish dinners to parade-goers.

“Hudephol partnered with some of the folks in Over-the-Rhine on Main Street and created Bockfest so it’s always been a springtime festival and really a celebration of Cincinnati’s heritage,” Hampton said.

One of those business partners was Arnold’s, one of the original bars to serve the Moerlein brew on tap. Since 1992, Arnold’s has served as the starting point for every Bockfest parade.

The fun there actually got started Thursday with the “Tapping of the Bocks” event where a monk blesses each of the kegs of bock beer. Arnold’s will have 19 bocks on tap this weekend, including three exclusive releases that they’ll debut Saturday.

The day of the Bockfest parade is always the busiest day of the year for Anrold’s, said Chris Breeden, who worked at Arnold’s for more than 22 years before buying it two years ago.

Arnold’s opens at 2 p.m. Friday and Beerden expects they’ll be packed by 3 p.m. Trying to find a seat “will be really hard” around the time lineup for the parade starts at 5 p.m, he said.

“Bockfest is really a chance for people to let their freak flags fly. It’s a great vibe and it’s just a good time,” he said. “For its uniqueness, there’s nowhere else in the world that has Bockfest or a festival like we do.”

One of the most anticipated events is the annual crowning of the annual Sausage Queen on Saturday night. Judges of the gender-neutral pageant pick a winner based on scores in three categories: personality, presence and talent. The talents range from singing to comedy to the more suggestive and risque. 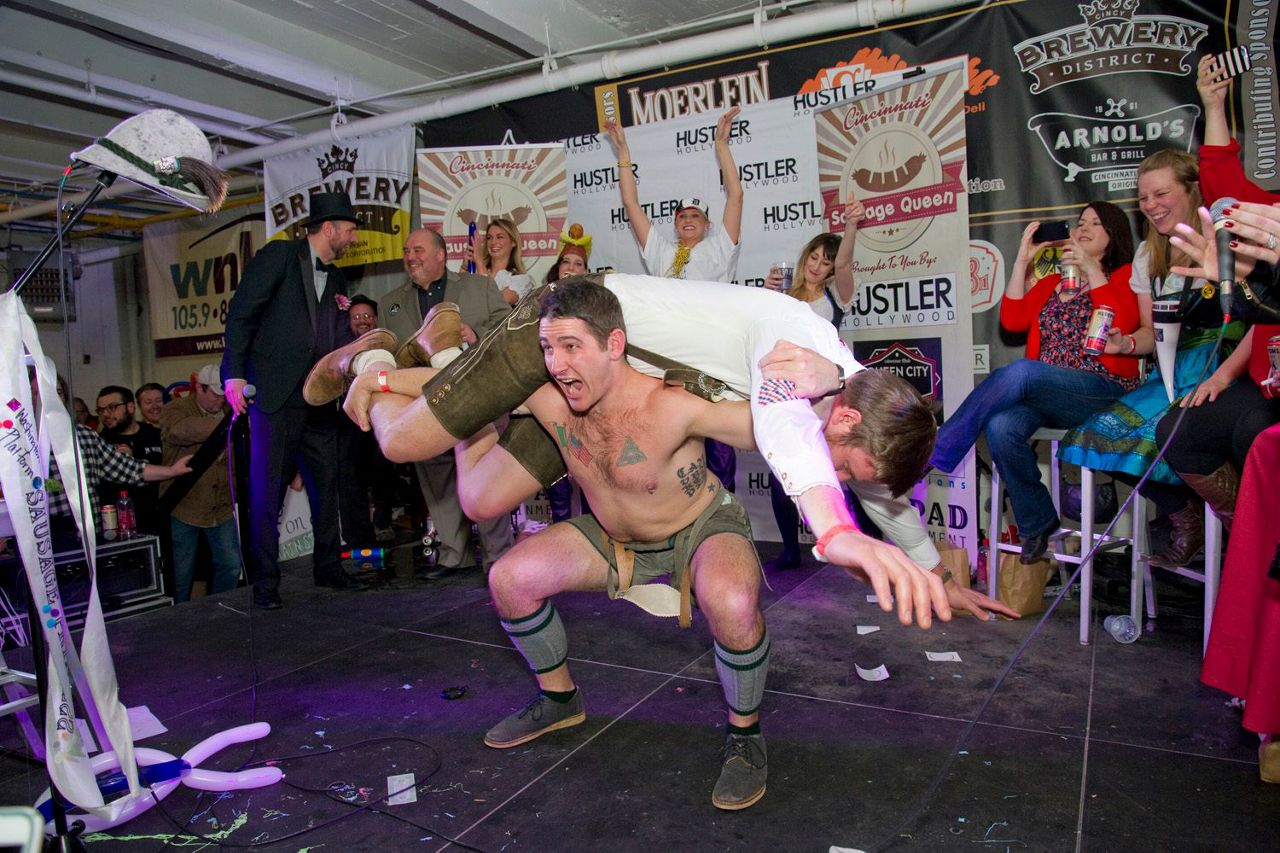 A performance during a Sausage Queen competition at Bockfest. (Provided: Bockfest)

The winner earns the right to lead the parade the following year.

In recent years, especially over the last 15, organizers have worked to develop Bockfest from a Friday night parade and a happy hour in a few neighborhood bars into what Hampton called a “real festival.”

It now includes a Saturday morning 5K, walking tours through one of Cincinnati’s most historic breweries and its underground lager cellars, and other historical programming, such as the Bockfest Heritage Series at Rookwood Pottery.

There’s also live music through the weekend and a pig roast on Saturday and Sunday. How many beer festivals have goat yoga? Bockfest does this on Sunday.

“We’ve got a mix of serious stuff and fun stuff that we’ve added to really make it a unique draw,” Hampton said. “You can come down and spend three days at Bockfest and find something different and fun to do each day.”

Bockfest has now taken place in some capacity every year for the past 30 years.

Technically, there wasn’t a formal Bockfest last year due to COVID-19 restrictions, but many businesses throughout greater Cincinnati upheld the tradition by serving bock beer and other German-style foods on the weekend the event would have taken place.

Despite the challenges, Hampton and a few “diehards and regulars” held an impromptu sidewalk parade to keep the tradition going.

Not just a happy hour anymore

Over the years, the festival has morphed into less a celebration of beer – though, there’s plenty of that – and more a celebration of Cincinnati, its brewing history and Over-the-Rhine itself.

Hampton said Bockfest is about activating the neighborhood. Not all businesses will formally take part, but he hopes the entire community benefits from the weekend-long festival.

Today, Bockfest is organized by the Brewery District Community Urban Redevelopment Corporation (CURC), a nonprofit that works to support the Over-the-Rhine and surrounding neighborhoods through tourism events, like historic brewery tours.

Bockfest has nearly 20 participating bars, restaurants and breweries – some of them are down in Over-the-Rhine, like Christian Moerlein and Northern Row Brewery and Distillery, two one of the primary event sponsors.

Beyond the pageantry– and occasional absurdity– of the event, Bockfest is a key economic driver for many small businesses in Over-the-Rhine and surrounding neighborhoods. It’s especially crucial coming out of a traditionally difficult January and February period.

Kelly Adamson, executive director of the OTR Chamber of Commerce, said Bockfest and events like are helping to attract new visitors – and new shoppers– to the neighborhood. New business, too.

“When we looked at our data, we saw this unbelievable growth, but we knew we had to create ways to support that growth,” she said. “To do that, you need to create more density, strengthen community culture and create events and initiatives, like Bockfest, that are going to bring people down here.”

Brenden Douglass, head of sales for Northern Row, called taking part in Bockfest a “no-brainer.” Northern Row will have four beers featured during the weekend, including its Cooper hellerbock called Cooper.

“Bockfest has always been a neighborhood festival. We love creating the hall and doing all the fun things there, but want to support our neighborhood and the businesses as well,” he said.

Hampton didn’t have an estimate on how many people to expect at the parade but he expects about 30,000 people make their way to Bockfest Hall over the course of the weekend.

“Some of the Bockfest old-timers may say, ‘Hey, I can’t get my corner spot at Arnold’s anymore,’ but there’s also a lot more places to hang out in the neighborhood these days and it’s great that people can really get out and spread that wealth around.”