“Celebrate Her story” puts the spotlight on Disney’s female artists, and on March 17, 2022, actress Ashley Eckstein will talk about “The History of Ahsoka” at Disney Springs. 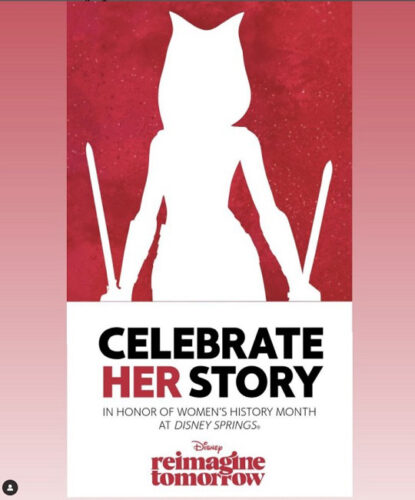 The presentation takes place at 10 a.m. at the Waterview Park, located next to Jock Lindsay’s Hangar Bar. Seating is first come first serve, and the event is free.

Eckstein made the announcement on her Instagram account, saying, “I’m excited to share that, in honor of Women’s History Month and as part of ‘Celebrate Her Story,’ I’ve been invited by Disney Springs to talk about ‘The History of Ashoka.’ […] I’m so thrilled to have this chance to connect in person and share more about this incredible character who has changed so many lives, including mine.”

The star further lifted up her warrior character – who, in the Star Wars empire, was the Jedi Padawan of Anakin Skywalker – with the recommendation what visitors who attend the talk check out the Lady Tano Pop from The Ganachery at Disney Springs.